Philip Hammond has warned that Britain will need to take a ‘different approach’ to the economy and pass another Budget if the UK crashes out of the EU.

He is due to pump £30billion into Britain’s roads, hundreds of millions on improving super-fast broadband in the countryside, and more money for defence in his tax and spend plan tomorrow.

But he suggested the promise to end austerity could be ditched, the spending plans torn up and austerity reimposed if the UK does not get a deal.

Chancellor of the Exchequer, Philip Hammond, prepares his speech in his office in Downing Street ahead of his 2018 budget announcement tomorrow 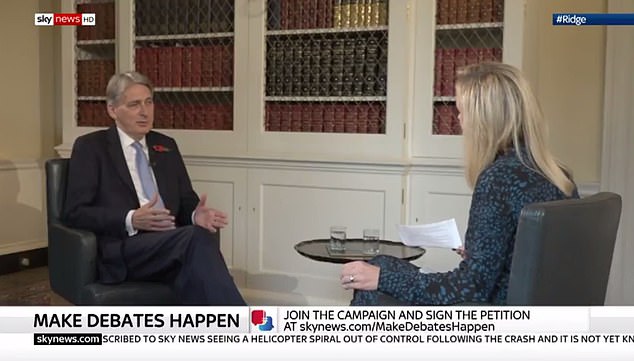 And Mr Hammond also warned that the country’s whole approach to the economy may need to be overhauled if the country suffers the shock of crashing out.

Tory MP and leading Brexiteer Jacob Rees-Mogg branded the Treasury a ‘bastion of Remainerism’ and said Mr Hammond should spell out now what Britain would do in the event of a no deal Brexit.

Mr Hammond’s stark words comes amid growing fears of a no deal Brexit as Theresa May faces a race against time to try to thrash out an agreement by the end of the year. 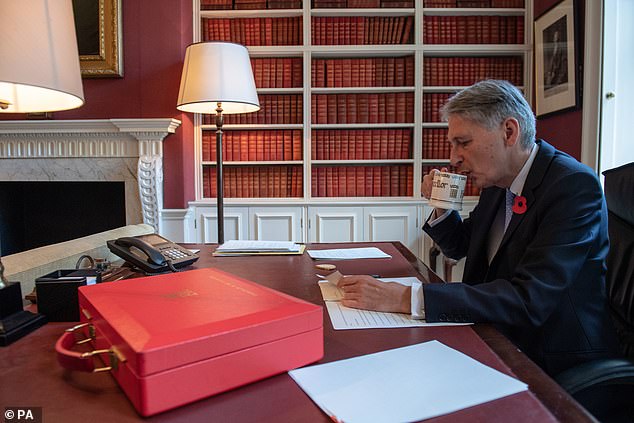 Mr Hammond is due to pump £30billion into Britain’s roads, hundreds of millions on improving super-fast broadband in the countryside, and more money for defence in plan tomorrow

Speaking to Sophy Ridge on Sunday on Sky News today, Mr Hammond warned that his Budget tomorrow could only be in place a few months of there if no deal.

Hammond to spend hundreds of millions more on super-fast broadband

Philip Hammond has vowed to splash out hundreds of millions of pound on installing super-fast broadband across Britain as he turns the spending taps on in tomorrow’s Budget.

The Chancellor said the cash injection is crucial to Britain’s economic prosperity as the internet today is as important ‘railways in the 19th’ Century.

It is part of his plan to pump many tens of billions of pounds into beefing up Britain’s infrastructure and services.

He came under massive pressure to find extra cash for an array of services after Theresa May used her speech at the Tory party conference earlier this month to promise and end to austerity.

Mr Hammond is understood to have drawn up plans for a £250m fund to help connect rural schools and libraries to ‘full fibre’ internet.

Once the cables are laid into schools, local residents and businesses will be able to connect to them – providing a much needed boost for the countryside economy.

In an interview with The Telegraph today, Mr Hammond talked up the UK’s ‘buoyant’ economy and its ‘fundamental health’.

He said: ‘If we don’t get a deal, if we do leave the EU without any deal – I believe that is an extraordinarily unlikely  situation – but of course we have to prepare for all eventualities as nay government would.

‘If we were to find ourselves in that situation then we would need to take a different approach to the future of Britain’s economy.

Mr Hammond’s remarks are a strong hint that austerity will be reimposed if there is a no deal Brexit.

In a separate interview with the BBC’s Andrew Marr show, suggested that Britain could slash taxes and opt for a Singapore-style model if there is a no deal Brexit.

He said the warning  was a ‘a statement of the blindingly obvious.’

He said: ‘If our businesses are no longer able to trade with European neighbours, if their supply chains are cut off, they are going to have to find they will have to find different markets and different ways of doing business and any government would want to support them in doing that.’

Mr Rees-Mogg, chairman of the European Research Group – the powerful backbench group of Brexit backing Tory MPs – said the Chancellor should spell out the no deal Budget plan tomorrow.

And he lashed the Treasury’s track record and gloominess on Brexit.

Speaking on Sky News’ Sophy Ridge, he said: ‘Oh look, the Treasury has been the bastion of Remainerism since the referendum and indeed before.

‘It came out with all these lunatic forecasts before the referendum as to what would happen purely on a vote to leave.

Britain’s high streets will ‘have to change’ to compete with the internet, Philip Hammond today said.

The Chancellor warned that he genie ‘can’t be put back into the bottle’ and town centre will have to adapt to  survive.

His remarks come  after a bloodbath on Britain’s high streets this year with many of the UK’s best known retailers closing stores.

House of Fraser shut down stores and only narrowly avoided administration while Debenhams is shutting 50 stores costing thousands of jobs.

Speaking on Sophy Rudge on Sunday on Sky News, Mr Hammond said high streets are important – but must change.

He said:  ‘The high street plays a critical role in many communities.

‘But we have to recognise as well that the change that’s driving the evolution of our high street can’t be put back in the bottle.

‘The British have taken to online shopping like no other nation on earth.  For better or for worse, we have to recognise that that is happening.

‘So our high streets have to change. We want to protect them because we want them to remain at the heart of our communities but we can’t do that by freezing the model of 10 or 20 years ago in aspic, it won’t work.

‘So we’ve got to help the high street to evolve and the high street of the future frankly will have fewer retail outlets and more leisure destinations, more food and drink outlets.

‘I expect the high streets of the future will be smaller with more of the peripheral areas around them redeveloped as housing.’

‘Bear in mind the Treasury said there would be 800,000 job losses potentially, just on voting to leave, before anything had happened so the Treasury has rather embarrassed itself, has a lot of egg on its face from getting its Brexit related forecasts so wrong so far.

‘And I think there is an element within the Treasury that is still grumpy about Brexit and that’s a pity.’

He said: ‘In that interview he seems to complacently accept there is a likelihood of no deal. We cannot accept that.’

Mr Hammond is set to turn the spending taps on in tomorrow’s Budget after Mrs May promised to end austerity in her party speech earlier this month.

But the reprieve could only last a matter of months if the crunch Brexit talks fail.

Tory MP and leading Brexiteer Jacob Rees-Mogg said Mr Hammond should not wait for many months but announce his spending plans in the event of a no deal Brexit now.

Hopes that Britain will be able to get a deal are fading after a crunch EU summit earlier this month where the PM had originally hoped to seal the deal came and went with no major progress.

Britain and Brussels are still at loggerheads over what to do about the Irish border, which has proven to be the thorniest issue in the negotiations.

Mrs May has called for a backstop plan which would see the whole of the UK to stay in a customs deal with the EU if no free trade deal which solves the problem can be done in time.

But Brussels has insisted that there must be a Northern Ireland specific backstop – which would keep that area alone tied in to customs and single market rules.

But this has been furiously ruled out by the PM who said that it would effectively hive off Northern Ireland and  draw a border down the Irish Sea.

She has repeatedly said this is a plan which no British Prime Minister could agree to.

Layla Moran, the Lib Dem MP and member of the anti Brexit campaign group Best for Britain, said: ‘This shows the Brexit black hole at the heart of this Budget. Tomorrow the Chancellor will go through the motions and announce money for this and that but all the while knowing they might not be able to deliver it.

‘This government cannot deliver a good Brexit deal, it couldn’t even negotiate it’s way out of a paper bag. Gone are the days of long term economic plans and have been replaced by short term Brexit scams.’ 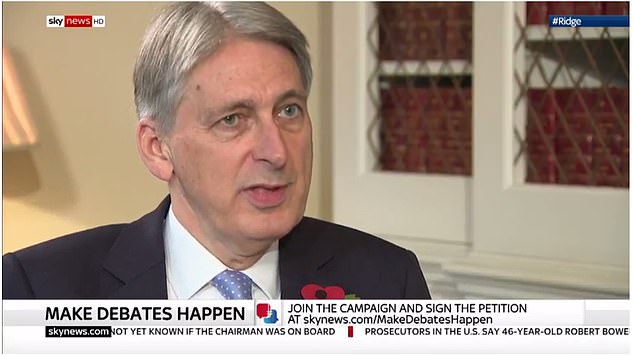 What will the Chancellor Philip Hammond announce in his 2018 Budget?

Chancellor Philip Hammond is expected to turn the spending taps on when he unveils his third Budget on Monday.

While he has tried to talk down frenzied speculation of big spending splurges across the public sector, he has set the stage for bigger spending than for many years.

It comes after Theresa May used her Tory Party conference speech to promise an end to austerity.

The spending pledges expected to be announced include: