Philip Morris is ‘trying to give up cigarettes’ for 2018

Tobacco giant Philip Morris International aims to stop selling cigarettes in the UK, it announced on Wednesday in a new advertising campaign.

The Marlboro-maker’s move is the latest in a wave of big tobacco companies’ – including the unaffiliated Philip Morris USA – efforts to re-brand themselves in an increasingly anti-smoking world.

Its campaign is also pushing PMI’s smokeless products, such as e-cigarettes, as healthier alternatives – an initiative that backfired against Philip Morris USA earlier this year when the legitimacy of its internal studies on e-cigarettes was called into question.

Philip Morris International’s new advertising campaign promises that it is now dedicated to switch from cigarettes to safer alternatives, along with its customers

PMI placed advertisements in a number of UK-based newspapers today, with the abbreviated ones stating simply, in the company’s signature shades of blue that ‘Our New Year’s Resolution’ is that ‘we’re trying to give up cigarettes.’

Its full-page advertisement details the actions that PMI has taken and plans to take to ween itself and its customers after the cigarettes it ‘is known for.’

Recent events indicate that big tobacco companies around the world are finally accepting that cigarettes, their bread and butter, may finally be on their way out amid irrefutable evidence that cigarette smoking is the leading cause of early death.

Instead, tobacco companies are embracing anti-smoking messaging – albeit, a bit late in the game – and the international trend toward e-cigarette use.

Between 2014 and 2015, sales of battery powered, smokeless vaping devices surged by 14.4 percent across the US as cigarette sales slowly continued to peter out, declining by 1.4 percent.

The FDA has not yet issued its decision on the product, but reports of inconsistencies and low quality research that surfaced last month do not bode well for the company’s foray into the vape market.

Several countries, including the UK have passed laws requiring cigarette cartons to be devoid of appealing advertising, and, in some places, to feature graphic health warnings instead.

This sort of legislation was met by outrage and concern by big tobacco companies and lobbyists, but recent research has suggested that, at least among teenagers at risk of taking up smoking – the warnings may have the opposite of the desired effect.

But in the face of this change, PMI is taking a different approach with today’s announcement.

In its full-page advertisement, the company said that its ‘ambition is to stop selling cigarettes’ to the 6.7 million smokers in the UK, because ‘the best action they can take is to quit smoking.’ 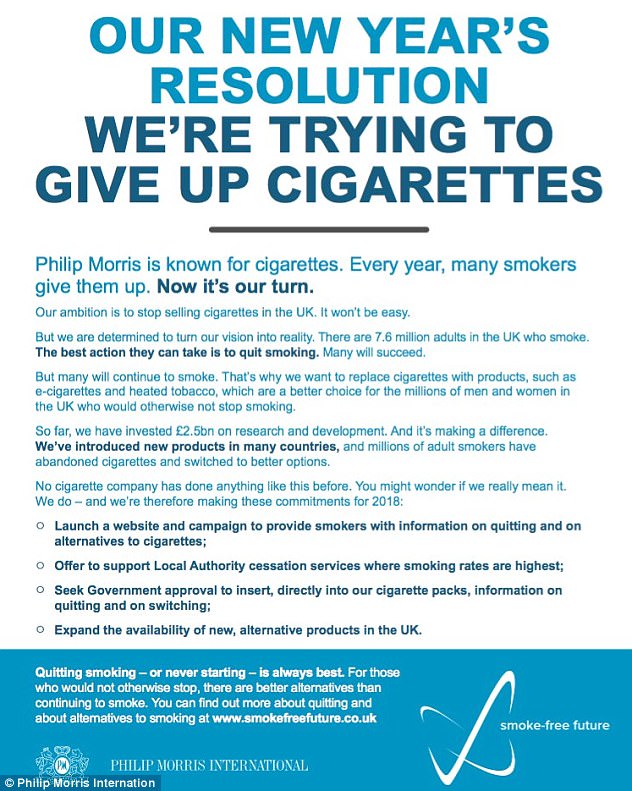 The big tobacco company laid out its new initiatives in full-page advertisements in several UK newspapers, but anti-smoking organizations are dubious of its claims

For those that will continue to smoke, the company wants to ‘replace cigarettes with products, such as e-cigarettes and heated tobacco which are a better choice.’

PMI claims to have already invested the equivalent of $3 billion USD in developing the products in Europe.

The company promised to back government quitting campaigns and to seek approval for quitting and ‘switching’ informational inserts to put in its cigarette packs.

PMI’s own anti-smoking website, smokefreefuture.co.uk, is curiously ‘only intended for UK and Ireland residents,’ and is not accessible from people seeking information from ‘restricted’ countries, including the US.

‘You might wonder if we really mean it. We do,’ PMI assured readers in the advertisements.

But anti-smoking organizations like the Truth Initiative are not so quick to buy the company’s proclamation that it’s changed its ways.

In a press release, the Truth Initiative wrote that ‘Philip Morris International’s claims are inconsistent with its current behavior.’

In the first three financial quarters of 2017, PMI shipped 20.5 billion units of its purportedly safer heated tobacco products – more than 5 times as many as it distributed the previous years.

But that number still pales next to the 565.6 billion units of cigarettes it sent out in the same period of time.

The Truth Initiative argues that if it were seriously anti-smoking now, PMI would cease sales and production of cigarettes altogether, but evidence suggests that the company may not be in such a hurry to make that happen.

Beginning in July, Reuters published a series of PMI documents that reveal the company’s correspondences and meetings with delegates from various countries, in secret efforts to undermine the World Health Organization’s global anti-smoking Framework Convention on Tobacco Control (FCTC).

The Truth Initiative points to these activities as well as ad campaigns like PMI’s ‘Be Marlboro’ promotions, which, it says are aimed at teenagers and young people.

Quoting previous statements made by Philip Morris executives, claiming that they would stop selling cigarettes if they knew they were harmful, Truth Initiative said that today’s announcement ‘isn’t the first time Philip Morris has stated a commitment to ending cigarette sales, but every prior announcement was nothing more than a smokescreen to enable it to continue business as usual.’