Altria, the parent company of tobacco giant Philip Morris, will be pulling its flavored e-cigarette pods from the market, it announced Thursday.

The maker of the MarkTen e-cigarette liquids is voluntarily discontinuing the products after the Food and Drug Administration gave Altria and four other e-cig makers (including Juul) 60 days to prove they were not intentionally marketing to minors.

MarkTen is by no means the dominant in the e-cig market, but has nonetheless agreed to end product lines like sweet brulee and hazelnut cream.

Altria also announced that it would support the push to raise the minimum age to purchase tobacco to 21 nationwide. 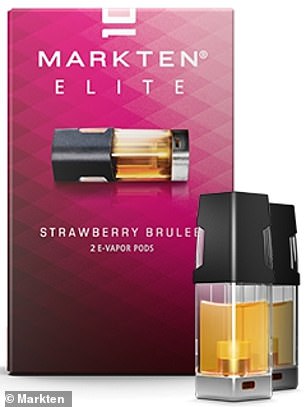 The other five companies called out by the FDA have yet to respond to the agency’s demand, though Juul’s headquarters were the subject of a raid earlier this month.

E-cigarettes have now surpassed traditional, combustible ones in popularity among teenagers.

Appalled by this steep upswing in the devices’ popularity, FDA commissioner Scott Gottlieb declared youth e-cigarette use an ‘epidemic’ in an impassioned announcement last month.

The announcement coincided with demands that several e-cig companies provide proof that they had not planned marketing campaigns and product designs to entice underage users.

The FDA also sent 1,300 warning letters and fines to retailers that its undercover agents discovered were selling-cigs to minors.

And shortly thereafter, agents showed up at Juul Labs for an unannounced investigation of its headquarters.

On October 12, another round of demand letters, giving 30 days to another 21 e-cig companies.

Rather than try to prove that its sweet vape flavors do not draw teens to its Markten products, Altria is simply pulling all of it’s flavors of e-cig pods except for tobacco, mint and menthol flavors.

So users will no longer be able to taste ‘apple cider,’ ‘hazelnut cream,’ or ‘strawberry brulee,’ when they puff on MarkTen e-cigs.

While other e-cig makers have thus far defended their flavors, research has demonstrated that younger people are more likely to take up vaping – and keep doing it – if sweeter flavors are available.

And one study, conducted last year in Texas, found that three-quarters of teenagers and young adults who used e-cigs said they would quit if flavored options were no longer available.

In addition to being tempting to children, early research on the health effects of vaping has suggested the compounds that give e-liquids sweet tastes may cause stress and inflammation to the lungs.

Other studies have even suggested that the colors associated with sweet flavors are more desirable to young people – hence the FDA’s concern over Juul’s vibrant, pop-y advertising campaigns featuring (sometimes very) young models.

Juul has responded to the FDA raid by saying that it was ‘committed to preventing underage use’ and wants ‘to be a part of the solution in underage use.’

It recently began selling pods with lower nicotine content (three percent instead of six), but has made no other clear changes to its existing product line.

Altria, on the other hand, is reviewing its products and says that it ‘welcomed the FDA’s recent actions,’ in a statement.