Philippines President Rodrigo Duterte moved to quit the International Criminal Court on Wednesday after it began investigating his brutal war on drug dealers.

Duterte announced he is withdrawing the Philippines from the Rome Statute which gives the Hague-based ICC the authority to investigate crimes on its soil.

The move comes a month after the ICC announced it was launching a ‘preliminary examination’ of Duterte’s bloody anti-drug crackdown that has seen thousands die in largely extrajudicial killings.

‘I therefore declare and forthwith give notice… that the Philippines is withdrawing its ratification of the Rome Statute effective immediately,’ Duterte said in a statement.

Police say they have killed nearly 4,000 drug suspects as part of the campaign, while rights groups claim the toll is around three times that number.

Many of the killings have been carried out by vigilante groups after Duterte gave them a free pass to shoot alleged drug dealers.

The outspoken Philippine leader has taken issue over the Philippines becoming the first southeast Asian nation put under a preliminary examination by the ICC.

Opened in 2002, the ICC is the world’s only permanent war crimes court and aims to prosecute the worst abuses when national courts are unable or unwilling.

The Philippines, under previous President Benigno Aquino, ratified in 2011 the Rome Statute which underpins the ICC.

On Wednesday Duterte, a former lawyer, attacked the ICC’s preliminary examination into his anti-narcotics campaign saying it was ‘unduly and maliciously created’.

‘It is apparent that the ICC is being utilised as a political tool against the Philippines,’ he said.

In his statement, Duterte cited ‘baseless, unprecedented and outrageous attacks on his person as well my administration’.

‘The acts allegedly committed by me are neither genocide nor war crimes. The deaths occurring in the process of legitimate police operations lacked the intent to kill,’ he added. 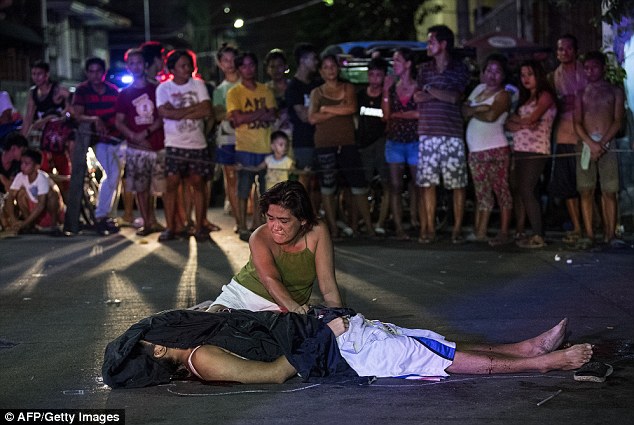 Police say 4,000 people have been killed since the crackdown started in 2016, but campaigners say the true figure is three times that number

But even as early as October 13, 2016, when Duterte had only been in office less than four months, the ICC prosecutor Fatou Bensouda said in a statement that she was ‘deeply concerned’ over reports of extra-judicial killings.

Iceland Foreign Minister Gudlaugur Thor Thordarson also called on the Philippines to accept the visit of a UN Special Rapporteur.

Philippine officials had initially said in February that the country was ready to cooperate but asked for fairness.

Duterte’s spokesman Harry Roque also said they would refuse a visit by one such rapporteur Agnes Callamard, who had previously been pressing to investigate.

But Roque has also said the ICC has no jurisdiction over the case because the tribunal was intended as a ‘court of last resort’ and the Philippine courts were fully functioning.

The news came as Duterte ordered a review of a decision by a prosecutor to dismiss complaints against several suspected drugs kingpins, amid outrage among the public and some of his allies.

A Department of Justice panel, citing weak evidence, cleared 22 suspects in a decision they made in December but was made public only on Monday in a document leaked to media. A self-confessed drug dealer was among those cleared.

Duterte has publicly named and shamed several provincial politicians and businessmen as ‘drug lords’ controlling the narcotics trade in the Southeast Asian nation. Some have been killed in what police said were shootouts.

‘I will invoke my power of supervision and control and will review (the) dismissal,’ Duterte’s spokesman, Harry Roque, quoted the president as saying during a joint command conference with police and military officials on Tuesday evening.

Police insisted on Wednesday they had strong cases against the suspects.