Philippines flight attendant tells how she breastfed a passenger’s baby

A Philippines Airlines flight attendant has told how she went above and beyond her call of duty when she offered to breastfeed a passenger’s infant who was wailing from hunger earlier this month.

In an exclusive interview with DailyMailTV, 24-year-old Patrisha Organo, who has a nine-month-old daughter, said she had no choice but to help another mother in need after the young mom discovered she did not bring enough formula to feed her baby.

‘We were just a few minutes into the 90-minute flight, and had just reached 10,000 feet when I heard the baby began to cry,’ Organo said.

‘As the mother of a nine-month-old, I know the difference between a “fussy” cry and one that means “I’m in distress.” As soon as the seat belt sign went off, I approached the mother to ask if there was anything I could do to help.’

Patrisha Organo, 24, from Manila, breastfed a stranger’s crying infant after the baby’s mom discovered she did not pack enough formula for the flight 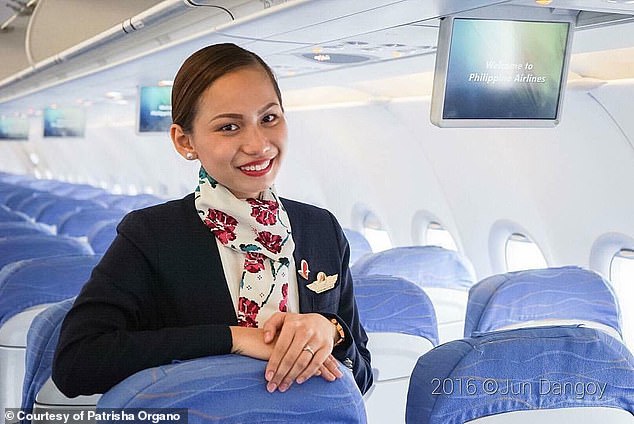 Organo, who has a nine-month-old daughter named Jade, said she felt like she had no choice but to help another mom in need after the infant started wailing just a few minutes into the flight

‘As an employee of Philippines Airlines, we are encouraged by our company to make sure passengers know that Filipino people have caring hearts.

‘So it’s our primary job not just to see to the general needs of our passengers, but to also be caring, compassionate and aware of all their needs.

‘The mother was traveling alone and out of necessity she had to arrive at the airport at 9pm, even though the flight was not due to depart until 5am the following morning.

‘She misjudged the amount of formula she would need and only realized she was in trouble when the baby began to wail.’

The flight took place on November 6, but Organo did not disclose where it originated nor its destination to protect the mother and baby’s identity.

Organo, who has been a flight attendant for the past four years, says she did her best to help comfort the mother and child, but nothing seemed to work. It was then she offered to breastfeed the stranger’s hungry baby.

‘I informed my line administrator who was on board of the dilemma and when I suggested I breastfeed the child myself, she didn’t hesitate in giving me permission,’ says Organo.

‘It was an emergency situation and with no formula on board, and a wailing infant, it was the right thing to do.’

Organo says she took the baby and her mother to the galley of the aircraft where she proceeded to breastfeed.

‘The other passengers had no idea what was happening,’ she said. ‘It was all done very privately with just me, the line administrator, the mother and the baby sharing the experience.’ 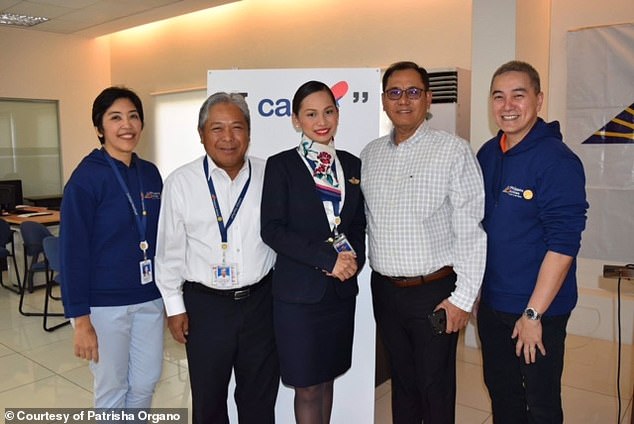 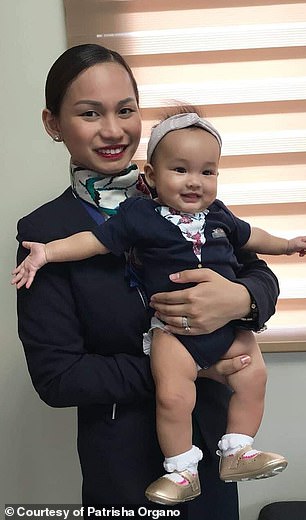 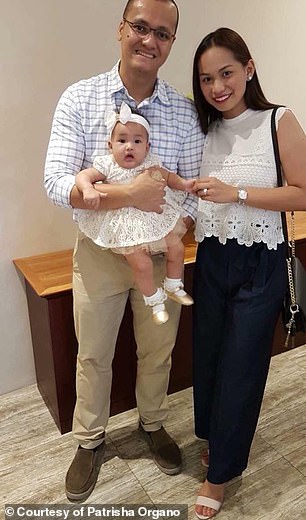 Organo is pictured with her own daughter, Jade, and husband Orson. Because her job requires her to be away from her baby for days at a time, she says she always brings her breast pumping kit with her at work

When asked if the baby’s mother hesitated at all to allow a stranger to nurse her child, Organo responded: ‘There was no hesitation from the child’s desperate mother at all. In fact she was very thankful and relieved, and to her utter joy once the baby was fed, she slept soundly until it was time to deplane.

‘I know there are people who might worry about allowing a total stranger to nurse their child because the wet- nurse might not be healthy, or drug free.

‘But as a flight attendant, I am required to undergo annual physical checkups that insure I am able to fly. I am also breastfeeding my own baby which makes me very aware of my responsibility to take care of my body and remain healthy.

‘As a working mother I must be away from my daughter for days at a time, I always bring my breast pumping kit with me whenever I leave for work.

‘The kit includes a breast pump, milk bags, cooler bags and other cleaning equipment so I am able to keep my milk and bring it home to my daughter. I plan to keep nursing my own little girl as long as she needs my milk.

‘Suffice to say that although I haven’t nursed another baby in flight, this is not the first time I’ve donated my milk to a baby other than mine.

‘My husband is very supportive and he was happy I could help the young mother and her child.

‘During the early days when I would become frustrated with trying to breastfeed, it was my husband Orson who encouraged me to keep going.

‘My company was also very supportive,’ she said. ‘I actually got a recognition from them acknowledging what I did.’

‘Sharing such an intimate experience with another woman and her baby was very rewarding,’ says Organo. ‘The mother and I exchanged information and we are still in touch. In fact she’s invited me to give her family a visit.’