A permanent exclusion zone may be created around the Philippines’ Mount Mayon after the volcano began erupting earlier this month.

A four-mile ‘no man’s land’ forcing thousands of villagers to abandon lands they have farmed for decades is now being considered by President Rodrigo Duterte.

Up to 80,000 people have already fled the mountain slopes since it began spewing lava, hot ash and molten rock in recent weeks.

The Philippines government is considering creating a permanent no-man’s land around Mount Mayon, the country’s most active volcano which began erupting earlier this month 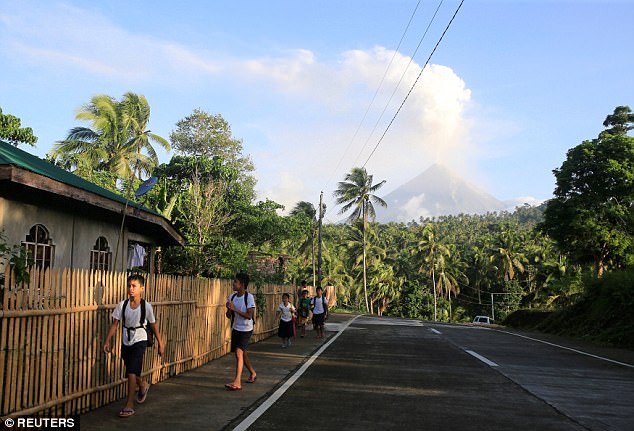 The Philippines government may create a permanent exclusion zone around Mount Mayon after it started erupting earlier this month.

The volcano is the most active in the Philippines, and the plans are designed to stop the government having to evacuate locals each time it becomes active.

Mr Duterte said the government may have to expropriate land from private owners in order to bring the plan to fruition, and added that such a move could spark ‘a social problem again’.

Many villagers are currently stuck in schools which have been turned into emergency shelters, with a lack of toilets and other problems with congestion.

The proposal is complicated given that thousands of impoverished villagers have settled through the years in a government-declared 3.7-mile permanent danger zone around Mayon, where they have survived on farming for generations. 80,000 villagers have been forced to flee the latest eruption and have been left sheltering in schools which lack sanitary facilities and are overcrowded 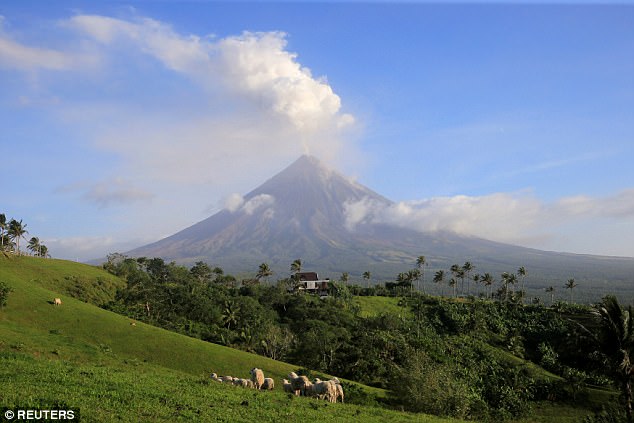 Mayon has erupted 50 times in the last 500 years, with five climbers being killed  near the summit in 2013 by an ash cloud

Local governor Al Francis Bichara told the president and other officials that his provincial disaster funds were running low.

Albay officials declared the entire province of more than 1.3 million people under a state of calamity two weeks ago to allow faster releases of disaster funds. Mr Duterte ordered the provision of additional funds to deal with the crisis.

While thousands have evacuated areas around the volcano, villagers have sneaked back in to check on their homes, farms and animals, and police and army troops have struggled to turn back tourists who want a closer view of Mayon.

Mayon, which is famous for its near-perfect cone, has erupted about 50 times in the last 500 years. In 2013, an ash eruption killed five climbers who had ventured near the summit despite warnings.

The Philippines has about 22 active volcanoes. The explosion of Mount Pinatubo in 1991 was one of the biggest volcanic eruptions of the 20th century, killing hundreds of people.