Pervert is caught flashing at woman: Creep is given away by camera flash as he upskirts a woman while pretending to talk on the phone

A pervert was caught upskirting a woman while pretending to talk on the phone after the flash went off.

In the clip, filmed in the Philippines, a group of people are sitting on some steps inside a large hall, with a woman sat on a step slightly above a man.

Unaware he is being filmed, the creep opens the camera app on his phone and places it against his ear before turning his head and subtly taking pictures up her skirt.

In the clip, filmed in the Philippines, the pervert pretends to talk on the phone, but turns his head to the side so he can upskirt a woman sat above him

He pretends to be talking on the phone while repeatedly turning to the side to point the camera towards the woman who is sat with her legs slightly open.

But while taking another image, he accidentally sets off the flash, alerting the woman to what he is doing.

She immediately shuts her legs and the pervert gets up and walks away from the steps.

The clip has gone viral on social media, racking up nearly one million views.

One individual commented on the clip: ‘Haha. You can see on the phone’s screen that he was using the camera. He was probably scared, that is why he ran down the steps!’ 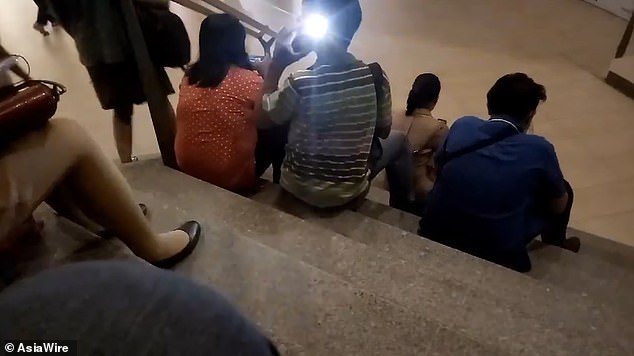 But the creep accidentally sets off the flash while pressing the phone against his ear, alerting the woman to his behaviour who immediately shuts her legs 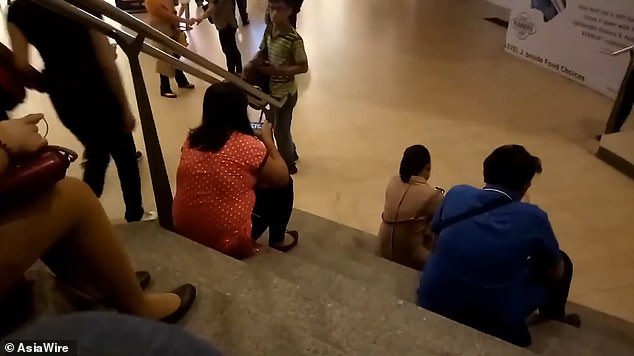 The young man then jumps up and leaves the steps, looking back at her briefly before walking away