Mayon is the most active of the Philippines’ 22 volcanoes, with 51 eruptions in the past four centuries

Philippine authorities who have declared a no-go zone around an erupting volcano said Thursday they will remove all holdouts, by force if necessary, to avoid casualties after tens of thousands of other residents fled to safety.

There have been no deaths in the 10 days since Mount Mayon began belching flaming lava, superheated rocks and ash, causing 75,450 residents to flee surrounding farms and communities, civil defence officials said.

However they said people have been leaving the shelters in daytime to tend to their farms and livestock inside the danger zone that now extends to nine kilometres (5.6 miles) from the crater.

Maria Evelyn Grollo, who runs a grade school-turned shelter for more than 4,000 people on the outskirts of Legazpi, said some are defying the city mayor’s order to stay away from their farms on Mayon’s lower slopes.

“In the mornings they go home, especially the men. But in the evenings they are here,” she said, adding they easily cross into the danger zone on their motorbikes.

“They just rush back to check their houses and their property,” Grollo told AFP.

Akim Berces, operations officer of the regional civil defence office in Legazpi city, told AFP the local authorities have sent police patrols to guard the abandoned farms and homes, so people should not go back. 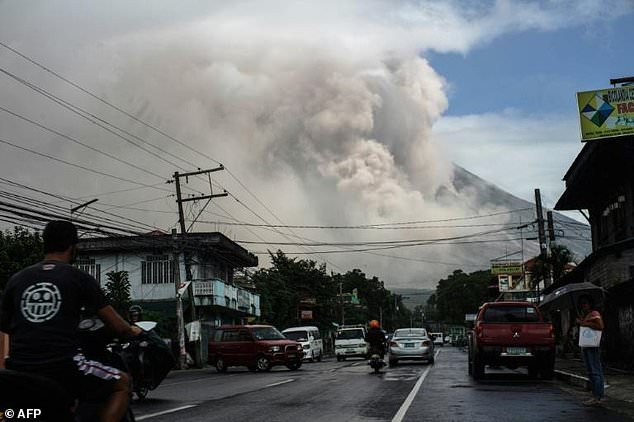 Tens of thousands of people have fled their homes since Mount Mayon began belching flaming lava, superheated rocks and ash

There have been no reports of looting to justify the evacuees’ actions, he added.

A number of residents with homes just inside the declared danger zone were also refusing to leave, Berces said.

“There are some people who don’t want to leave but the local governments are forcing evacuations,” he said.

“The security (officials) are already talking about it, how they will ensure that it should be a no-man’s land.”

Berces said the authorities wanted residents in the vacated high-risk areas to move their cattle, pigs, goats, and chickens to a separate evacuation centre for livestock.

“There is a place to put them,” he added.

The Philippines is part of the Pacific “Ring of Fire” of islands that were formed by volcanic activity.

With 51 eruptions in the past four centuries, Mayon, a near-perfect 2,460-metre(8,070-foot) cone about 330 kilometres southeast of Manila, is the most active of the country’s 22 volcanoes. 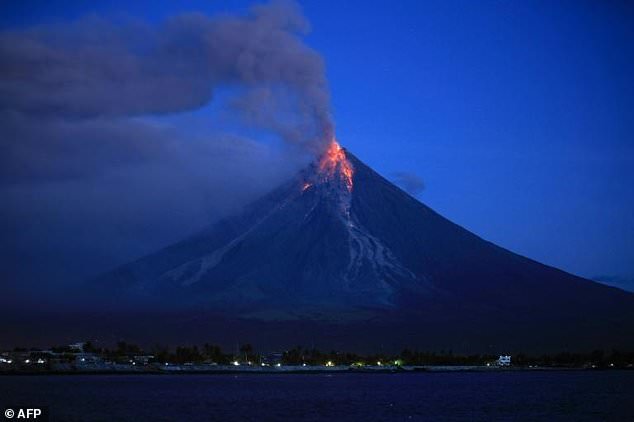 Despite the danger, hundreds of tourists are flocking to Legazpi and nearby towns to watch the spectacular eruption up close

Authorities have closed airports in the region, while periodic ash showers have made driving on some roads nearly impossible. Local governments have advised residents to wear facial masks and goggles.

Mayon continued hurling red-hot lava, and ash plumes into the sky in the past 24 hours, accompanied by hot ash, lava and rocks rolling down its flanks, the state volcanology office said.

Despite the danger, hundreds of tourists, including a spattering of Westerners, are flocking to Legazpi and nearby towns to watch the spectacular eruption up close, provincial tourism officer Dorothy Colle told AFP.

“It’s a unique phenomenon. It attracts visitors. It’s just that the numbers are not that big because we were affected by the closure of the airport, she said, shutting down eight daily flights from Manila and Cebu city.

Tourist arrivals in Albay province, which includes Legazpi, surged 20 percent from a year earlier in 2001 during the last major eruption of Mayon, which Colle said is the province’s main attraction.