He’s one of the UK’s biggest TV stars known for his red carpet appearances.

But even Phillip Schofield was quick to poke fun at his oddly-placed thumb after striking the unusual pose at the House Of The Dragon premiere in London on Monday.

The This Morning presenter, 60, who attended the launch with his daughter Molly, 29, took to Instagram to repost an image from the event joking he should ‘know what to do’ with his hands when he poses at events.

Oops! Phillip Schofield pokeed fun at his oddly-placed thumb in a snap from Monday’s House Of The Dragon premiere

Phillip shared a snap alongside his daughter Molly at the event, along with the caption: ‘Ep 1 of @houseofthedragon is epic!

‘BUT… after nearly 200 years in showbiz, you’d think I’d know what to do with my fecking thumb!’

For the event Phillip had been posing with his left hand in his pocket, with his thumb sticking out, leading him to poke fun at the suggestive image on social media. 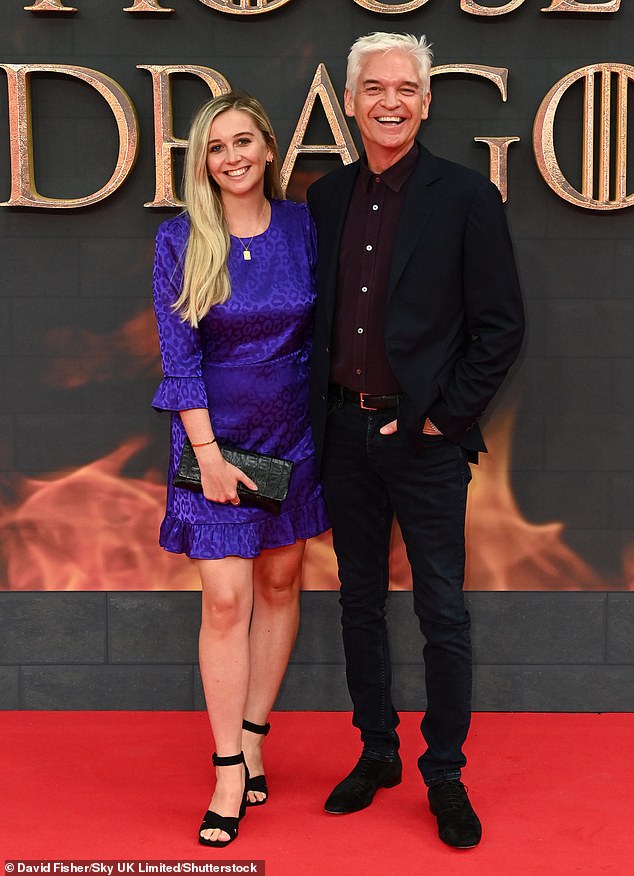 What is that? The star’s thumb was unusually placed as he posed on the red carpet, and he joked on Instagram: ‘You’d think I’d know what to do with my fecking thumb!’ 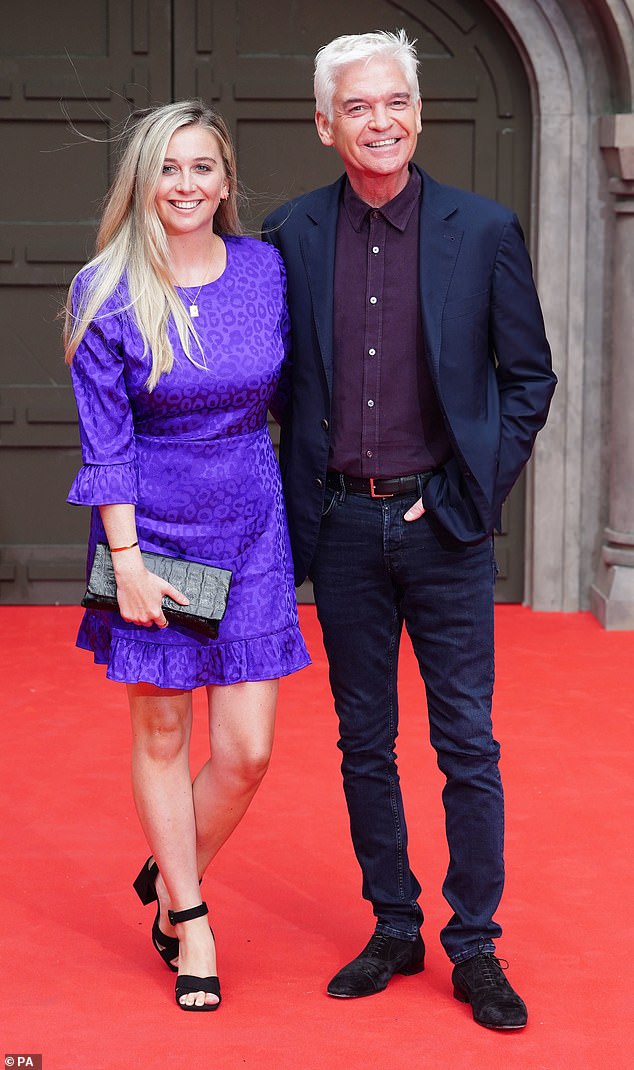 Smart: The television personality cut a dapper figure in a dark blazer which he layered over a mulberry shirt and skinny jeans

The television personality cut a dapper figure in a dark blazer which he layered over a mulberry shirt and skinny jeans.

Phil, who also shares daughter Ruby, 23, with wife Steph – who he continues to be close to after revealing he was gay in 2020 – completed the look with a pair of suede brogues.

Opting for black accessorises the talent manager accentuated her natural beauty with just a touch of make-up as her blonde locks cascaded to her shoulders.

The long awaited Game Of Thrones prequel House Of The Dragon is set to unpick the fraught, fractious and undeniably incestuous lives of Daenerys Targaryen’s distant relatives. 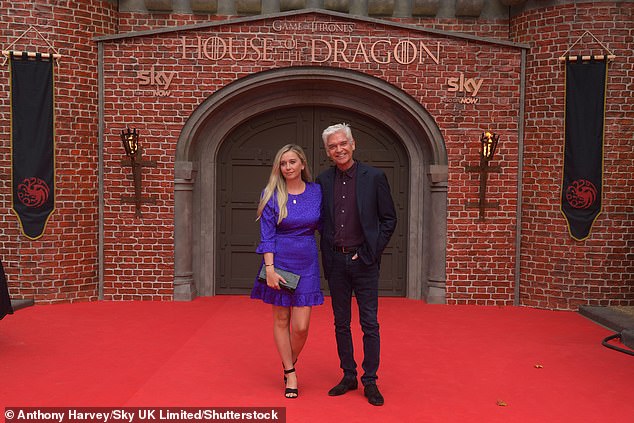 With £16million spent on each episode of the series the show stars Matt Smith, Milly Alcock, Olivia Cooke and Paddy Considine.

House Of The Dragon airs from August 22 on Sky Atlantic and streaming service NOW in the UK and on HBO and HBO Max in the US.

Earlier this year, Phillip was praised by his family as they celebrated his 40 years of presenting. 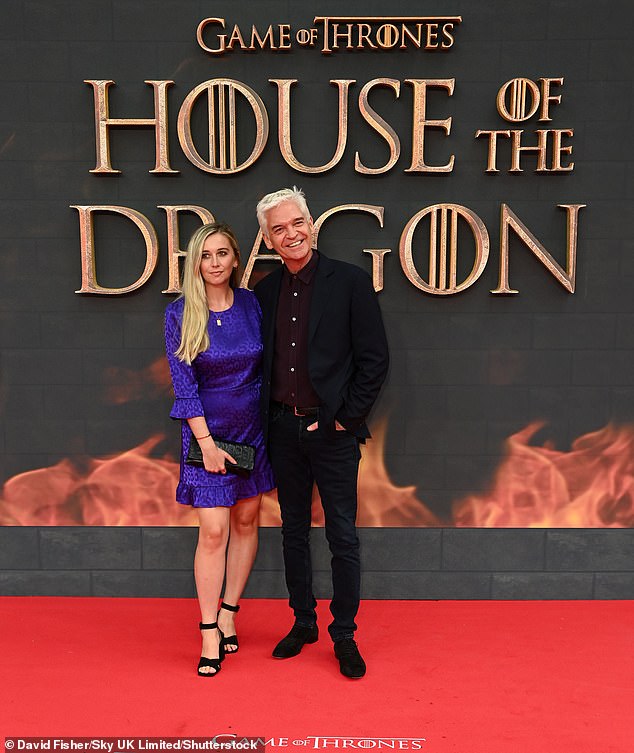 Beaming: The duo appeared in high spirits as they hit the red carpet at the swanky premiere 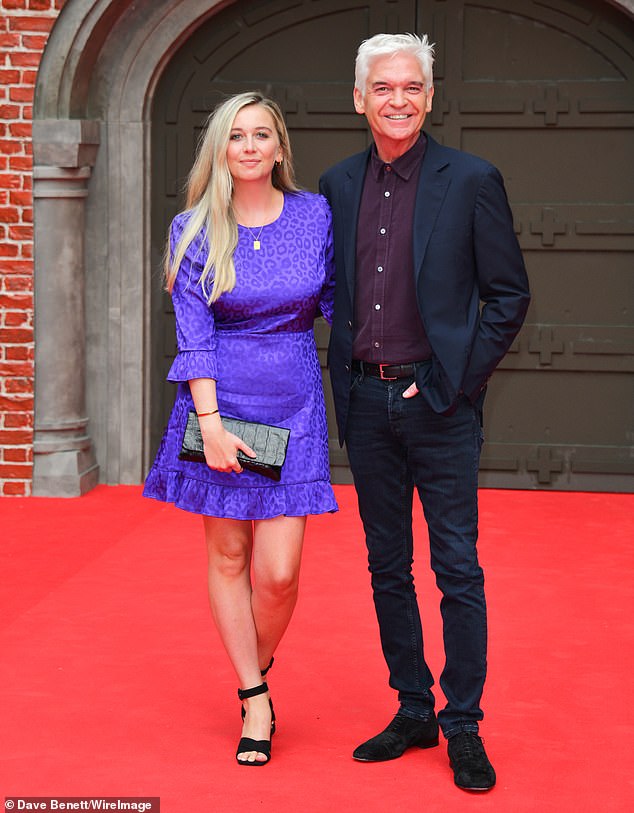 Natural beauty: Opting for black accessorises the talent manager accentuated her natural beauty with just a touch of make-up as her blonde locks cascaded to her shoulders

The prime-time host couldn’t conceal his shock as Lorraine Kelly broke the news that her show would be dedicated to his 40th year in TV.

And it wasn’t merely a whole host of celebrities who paid tribute to Phillip on his momentous career milestone, as two of his nearest and dearest – wife Stephanie and Molly – tuned into the daytime show to heap praise onto him.

During their segment on the programme, Steph was asked what she believes is the reason Phillip has been so successful at his game. 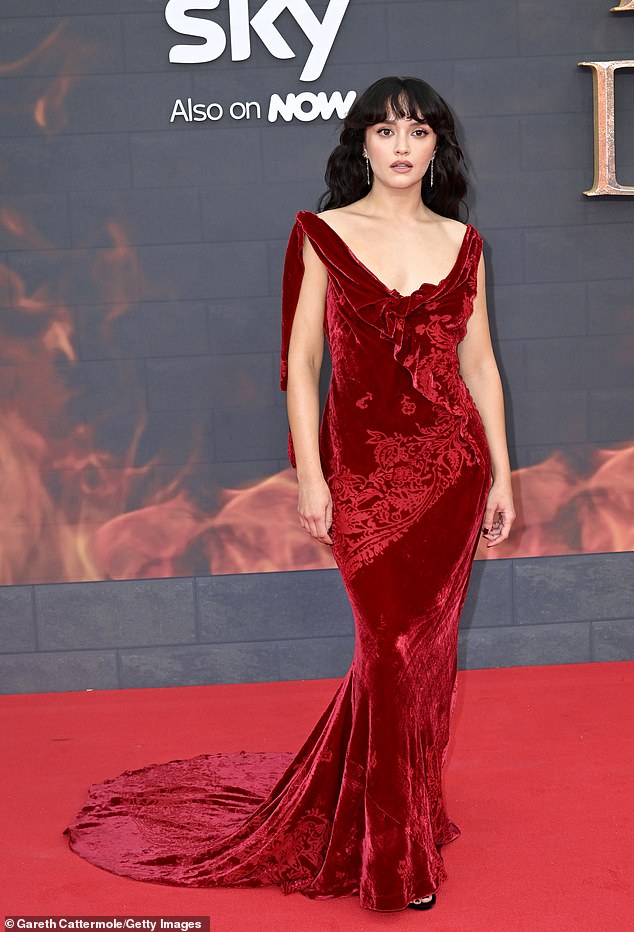 Incredible: Olivia Cooke, who plays the ambitious Alicent Hightower in the new prequel, stood out in a figure-hugging red gown.

Excitement: With £16million spent on each episode of House of the Dragon the show stars Matt Smith (pictured) Emma D’Arcy and Paddy Considine

She replied: ‘I don’t have a clue! No, I think your previous guests hit the nail on the head. He is genuinely interested in people. He’s always reading the news, he’s always keeping up with everything, he’s good fun.’

Meanwhile, Molly regaled: ‘I mean, I have always been so proud of him. I remember going on a school trip to see him in Doctor Dolittle and all my friends wanting to go and find him for an autograph.

‘I remember queuing up myself. I wanted it as well – I felt left out!’

Phillip was asked what his family mean to him and he referenced the ‘changes’ in their lives, after publicly coming out as gay at the beginning of 2020.

He said: ‘[They mean] everything. We’ve obviously had changes in our lives but I’ve always said it’s us four but slightly different. I was with Steph and Ruby during the big storm on Friday.

‘That’s essential. Steph has been the most incredible foundation, support and rock throughout my career. My girls I couldn’t be more proud of.’ 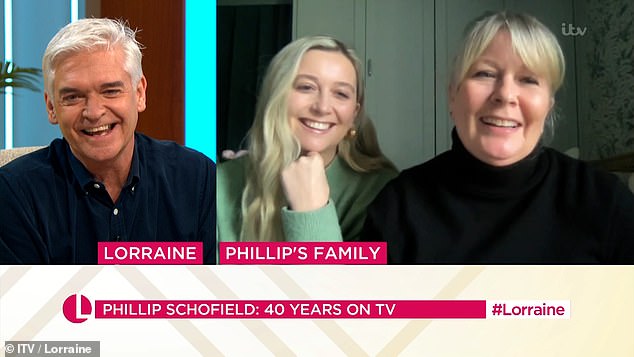 Special: Earlier this year, Phillip was praised by his family as they celebrated his 40 years of presenting with wife Stephanie and daughter Molly chiming in to Lorraine