The police believed they had the solution for the problem ahead of the Eagles’ 38-7 win over the Minnesota Vikings on January 21 when they smeared Crisco all over the street poles in an effort to keep fans from risking injury by climbing above the crowd swarming the Mayfair section of the city.

But despite the work of the ‘Crisco Cops,’ as social media began referring to them, intoxicated Eagles fans still managed to ascend above the city streets. 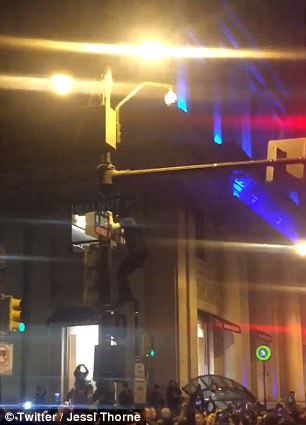 (Left) A greased pole stands near the intersection of Broad and Shunk Streets in South Philadelphia before the NFC championship NFL football game between the Eagles and the Minnesota Vikings on January 21. The Eagles won, but the grease proved ineffective (right) 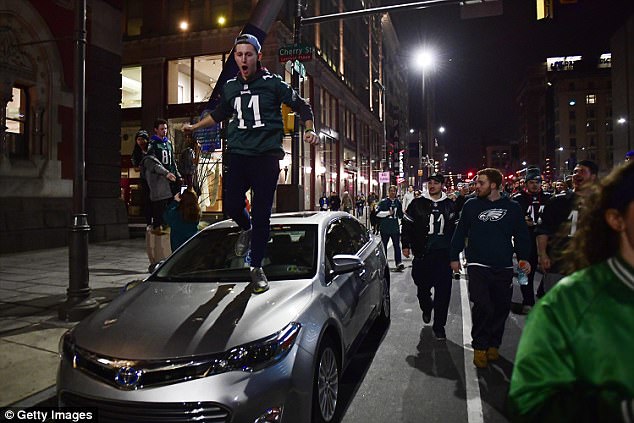 Philadelphia Eagles fan runs on top of a car celebrating North Broad Street with droves of others downtown near City Hall on January 21. A larger crowd is expected after the Super Bowl

Police Commissioner Richard Ross announced the change this week, but did not specify the department’s new strategy.

‘I just don’t want to tell you how they’re changing, but I will tell you that there will be some small variations to what we did last,’ Ross said, according to the New York Daily News.

‘Rest assured, whatever we do, it will be safe to anybody, any animal, any child, anything, but it will be effective,’ he said. ‘I can’t tell you that there won’t still be attempts, but I just would suspect that some of them will be far more difficult than they were with the Crisco attempts.’

Around 12,000 fans flooded the Mayfair section of Philadelphia after the Eagles. Several drunken fans were seen throwing empties at the Minnesota Vikings team bus, but aside from six arrests – three of which were reportedly for selling fake tickets – the celebration was relatively benign.

Of course, the Eagles have never won a Super Bowl and it’s unclear what the fans are capable of if the team was to do so on Sunday.

‘We would anticipate those crowds to be significantly larger than they were, because we’ve never won a Super Bowl,’ Ross said. ‘But we’re going to change that on Sunday.’

Over 70 fans were arrested in 2008 after the Philadelphia Phillies won the World Series for the first time since 1980.

‘We will be ready,’ Ross said. ‘We will be out there with a sizable contingent of officers that will be seen by most and we will make every effort to know that we are about business, but we are also the business of allowing people to celebrate as long as it’s done peacefully.’ 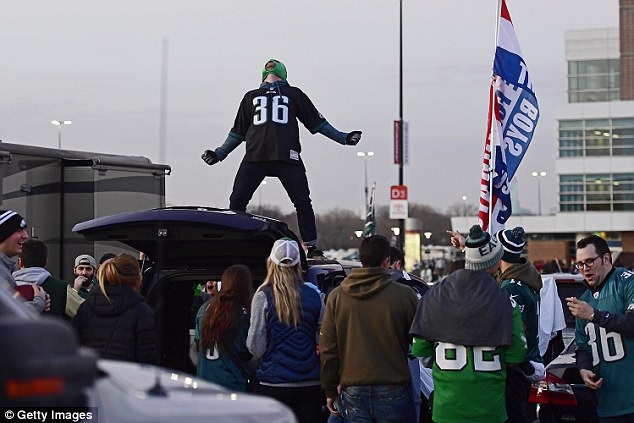 Matt Wier of Manayunk, Pennsylvania lets out his war cry adorned in a luchador mask atop a SUV at Lincoln Financial Field on January 21 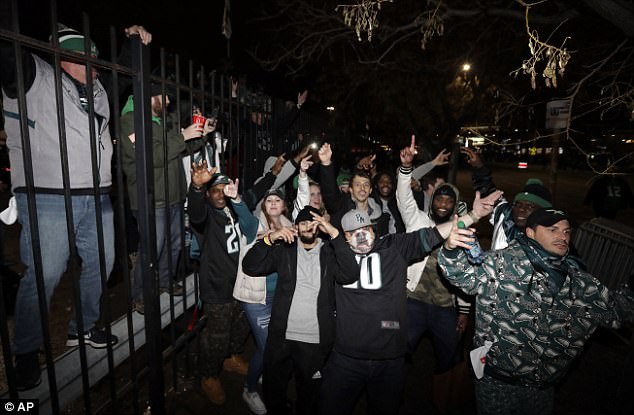