A tradie spent a desperate 39 minutes on the phone with emergency services before drowning in NSW floodwaters.

The Pakistani national was on his first day of a new contracting job when his Toyota Camry became trapped in the flood on Cattai Ridge Road in Glenorie on Sydney’s northern outskirts.

The inside of his car was badly damaged, indicating to police that he desperately battled to save his own life and escape the car as waters rose around him.

NSW Police Detective Inspector Chris Laird said the man called Triple-Zero at 6.25am on Wednesday and remained on the line with the operator until about 7.

‘Had he not rung us, we never would have found him. Not until the water receded anyway,’ Det Insp Laird said.

‘We can only speculate as to why he couldn’t get out of the car. Initial examination showed he made all reasonable attempts.

The Pakistani national’s Toyota Camry became trapped in the flood on Cattai Ridge Road in Glenorie on Sydney’s northern outskirts. His body was found at 1pm on Wednesday inside the car 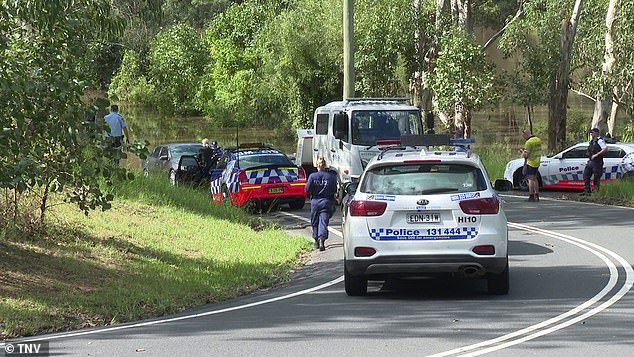 ‘You can only imagine someone fighting for his life in the car, the damage inside.’

He said the roads had multiple signs and road closure warnings, yet the car was located 30 metres into flood waters and six metres under water.

Emergency crews later arrived at the scene and recovered the man’s body at 1pm after locating his submerged car.

‘Also too, the remote location of the area, (we’ll ask) questions about what he was doing up there. He may not have known the area as locals would,’ he said.

Det Insp Laird said the 25-year-old had strong roots in western Sydney, and that his friends in Australia were devastated by the news. 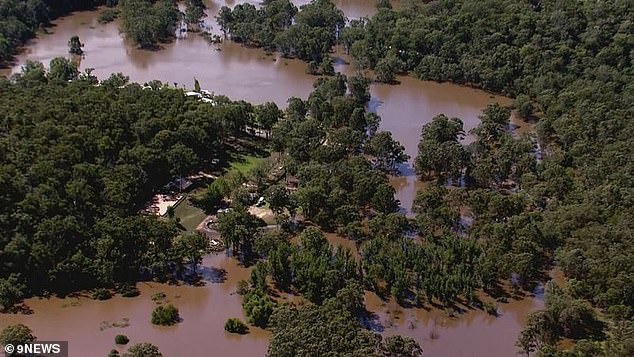 The car with the man’s body inside was found in Cattai Creek (pictured) at about 1pm following a NSW Police and SES Flood Rescue search. The man has not yet been formally identified 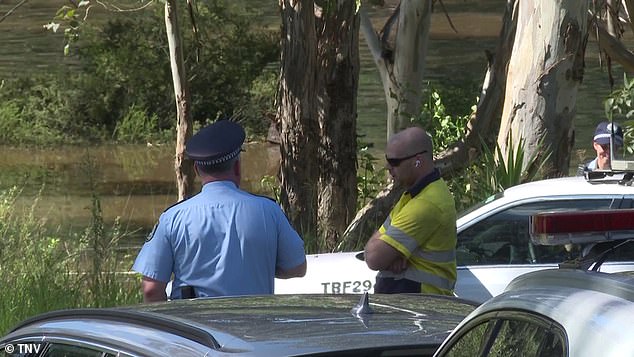 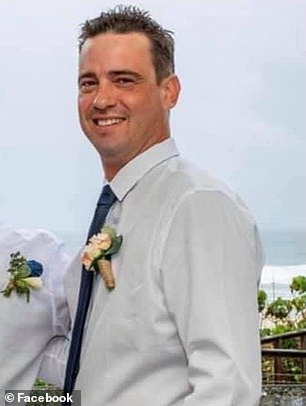 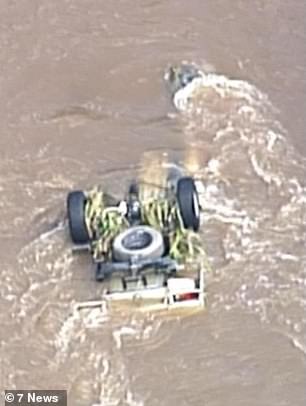 He thanked NSW emergency services for their work.

‘We have seen so much over the course of the past year and more as this country has battled so many things – floods, fires, viruses, drought and now these floods again,’ Mr Morrison said on Wednesday.

‘Now this family will get this news and they will grieve.

‘Around them, activity will occur as the flood waters recede and the clean up begins, but their house will be dark and their grief will be great.’

The premier said there is still extreme danger in flood-hit areas despite the sunshine in Sydney on Wednesday. 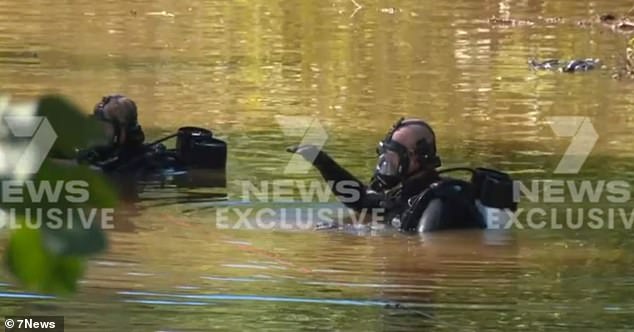 In Queensland, a desperate search for David Hornman, 38, ended when his body was found inside his ute in the Gold Coast Hinterland on Wednesday afternoon.

The 38-year-old father was last seen on Monday and had not contacted his family since heading to a job in the Tamborine area, where torrential rain caused flash flooding this week.

His ute was spotted earlier in the day in the flooded Canungra Creek.

Mr Hornman’s desperate wife has been active on social media since then, appealing for help from anyone who saw him.

‘He didn’t turn up to work and hasn’t been able to be reached since. His phone is turned off,’ Angela Hornman posted on Facebook on Tuesday. 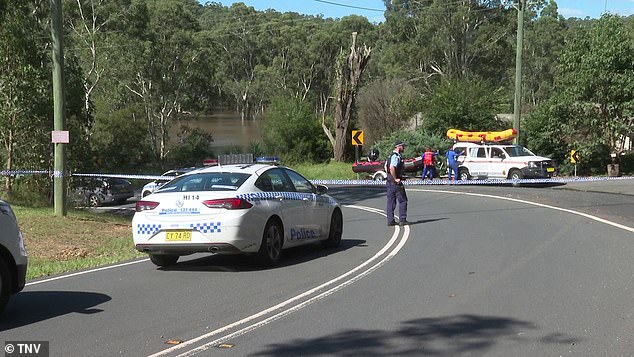 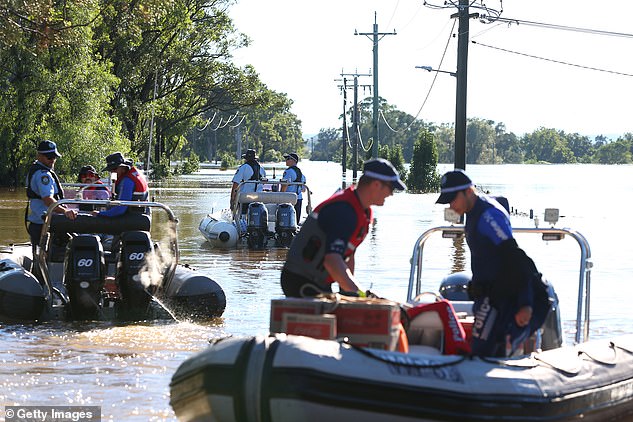 ‘I just have to know he’s ok. Please tell him no matter what I LOVE HIM.’

The Hills Shire Council on Wednesday said Cattai Ridge Road in Glenorie was shut due to flooding.

Treacherous rivers around flood-stricken NSW will remain swollen into the weekend but are unlikely to rise further as weather conditions ease.

Some 24,000 people in NSW are still evacuated from their homes but the torrential rain that has battered the state for the week has finally settled.

About 60,000 people have nevertheless been told by the State Emergency Service to be ready to evacuate, with major flood warnings still in place for the Macintyre, Gwydir, Clarence and Hawkesbury, Nepean and Colo rivers.

The areas of continued concern include Moree in the NSW northwest, the Upper Hunter around Singleton, Grafton, parts of the Central Coast and the Hawkesbury-Nepean catchment northwest of Sydney.

The bureau also warned of the risk of falling trees due to saturated soil. 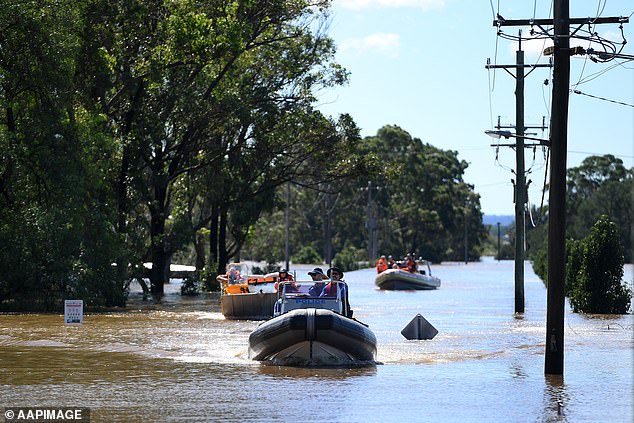 SES volunteers and NSW Police begin delivering food, medicine and essential items and inspecting properties inundated but floodwaters around Windsor in the north west of Sydney 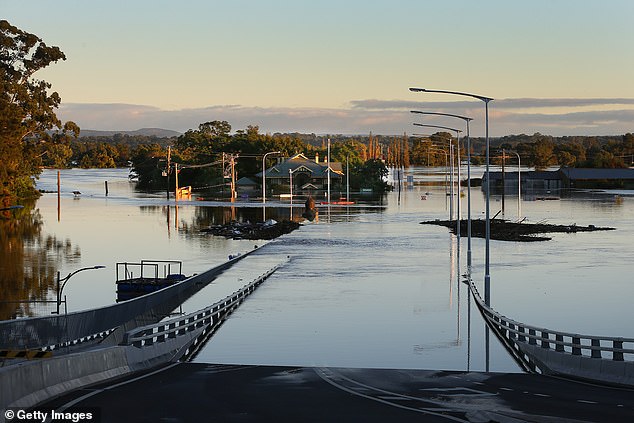 Rain has eased across a vast swathe of southern Queensland, but river levels are expected to remain high for a few days, despite the sunny skies.

At Beaudesert, south of Brisbane, major flooding is continuing along the Logan River, with some residents ordered to leave on Tuesday night.

State Emergency Services Minister Mark Ryan says it will be some time before there’s a comprehensive tally of flooded properties and vehicles lost to floodwaters.

He said the activation of joint federal-state disaster assistance for the hard-hit Gold Coast, Logan and Scenic Rim councils would fund the removal of tonnes of debris, and repairs to roads and other infrastructure.