Phone of missing girl, 16, was switched off in skate park near her Hampshire home

Phone of missing girl, 16, was switched off in skate park near her Hampshire home two hours after she was last seen – and hunt for her enters seventh day

The phone of a missing 16-year-old girl was switched off in a skate park two hours after she was last seen.

Fears are mounting over the welfare of Louise Smith as the hunt enters its seventh day, with detectives making a desperate plea for her to contact them or relatives.

The teenager has not been seen or heard from since she disappeared in Havant, Hampshire, at midday on May 8.

Louise Smith, 16, disappeared around midday on Friday May 8 from Havant, Hampshire 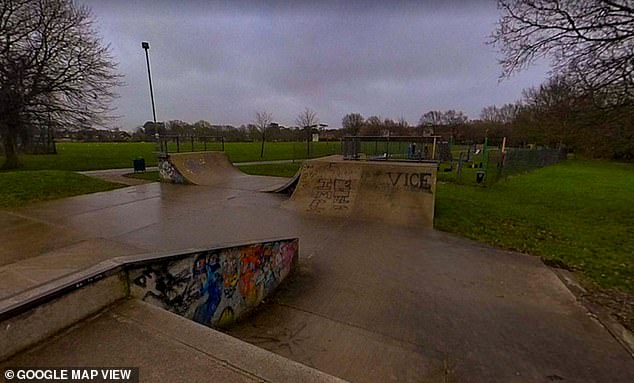 Her mobile has been tracked to Emsworth skate park, pictured, before it was switched off

In a personal plea, detective inspector Ron Lock said: ‘I want to appeal to Louise directly to get in touch with us tonight.

‘Louise, it has almost been a week since you went missing and our priority is to know that you are ok and safe.

‘Please call us or a loved one, so that we can help you.’

Police have tracked her phone to Emsworth skate park near Havant, Hampshire, but the device was then turned off and there have been no sightings of the teenager.

Her family speculated that she would not switch her phone on knowing that the police can trace her.

The last reported sighting of Louise was in Somborne Drive, Havant, and she was wearing black jeans, a black and white striped t-shirt, black trainers and a black coat with a fur hood.

A picture released by her family to assist in the investigation shows her in a teal dress which she is believed to have worn to prom.

She was described as white, around 5ft 2 ins tall, of slim build and with straight, black, shoulder-length hair.

A spokesman for Hampshire Police said this week: ‘Louise, aged 16 years, was last seen at around midday on Friday May 8 in Somborne Drive, Havant.

‘She has not been in contact since and we are growing increasingly concerned for her welfare.

‘Officers have been following several lines of inquiry since Louise was reported missing and we are keen to hear from members of the public who may have seen her.’

Worried friends and relatives have set up a website for people to share and leave messages and to help co-ordinate the local search for her.

They have asked the public not to hamper the police investigation, particularly with the coronavirus lockdown.

Kat Foy created a community group dedicated to finding Louise. She said that the public should not do their own searches but only contact Hampshire Police if they have information.

She added: ‘They are in the important part of their search, the police are the experts at this stage. Please refrain from doing your own searches it will hinder the police.

‘When they require the public to search they will request this, we are here to raise awareness.

‘Louise is missing, we are not here to overwhelm Louise or worry her. Please, if you see Louise please do not approach her, it may scare her, please dial 101.’