A breast cancer survivor has gone viral after sharing a picture of her breastfeeding her baby son while displaying the scar from her mastectomy.

Bo Smith, 32, from Sugar Land, Texas, posted the powerful photo of her with 10-day-old son James on Facebook, along with the quote: ‘Never be ashamed of a scar’.

She added that she couldn’t ‘begin to explain’ how it felt to breastfeed her baby, after ‘losing one breast to cancer and being told I may not ever have this sweet boy in my arms.’

Bo later explained how she was diagnosed with a rare and aggressive form of breast cancer in 2015, and was told by doctors she only had 40 per cent chance of living for five years.

Her moving post has been shared over 5,000 times on Facebook, and received thousands of messages of support – with some saying they had been left in tears.

Writing on Facebook, Bo shared a quote that read: ‘Never be ashamed of a scar. It simply means you were stronger than whatever tried to hurt you.’

She continued: ‘I can’t begin to explain how this feels everyday to be able to breastfeed my son, after losing one breast to cancer and being told I may not ever have this sweet boy in my arms.

‘I am not ashamed of this body. This is what continues to remind me of how lucky I am to be here today.’ 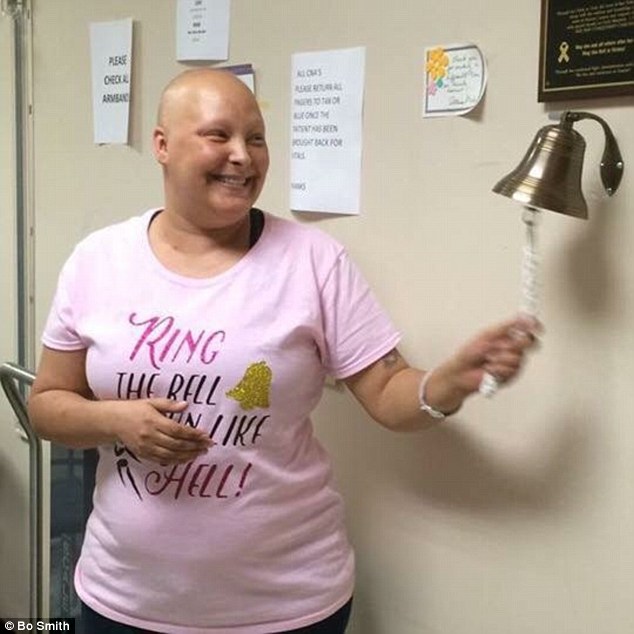 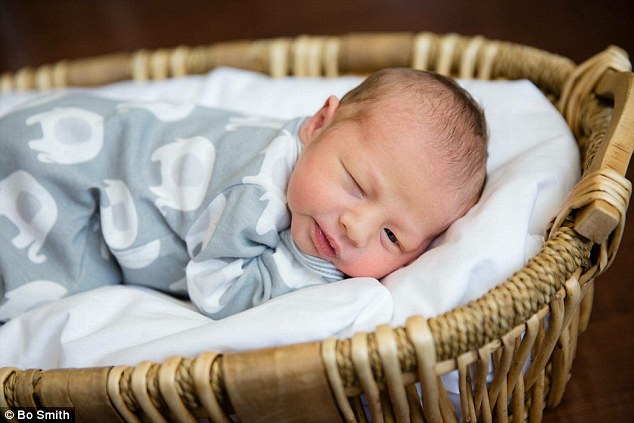 However, Bo defied the odds to give birth to baby son James (above) three years later, after managing to conceive naturally despite being told her fertility had been affected by the cancer treatment she underwent

Her fiancé James Cofer, 34, had proposed to her just a month before, and the couple had been busily making plans for their wedding.

‘I was devastated. My first words were, “My life is over. I will never be a mom,” she said.

‘I still remember sitting with my oncologist as she held my hand and explained that there was only a 40 per cent chance of living to five years, and feeling so drained and numb that I couldn’t even cry.’

Bo underwent chemotherapy treatment, before having a mastectomy of her left breast.

‘I opted to keep my right breast so that I may one day have a chance to breastfeed my future children,’ she explained. 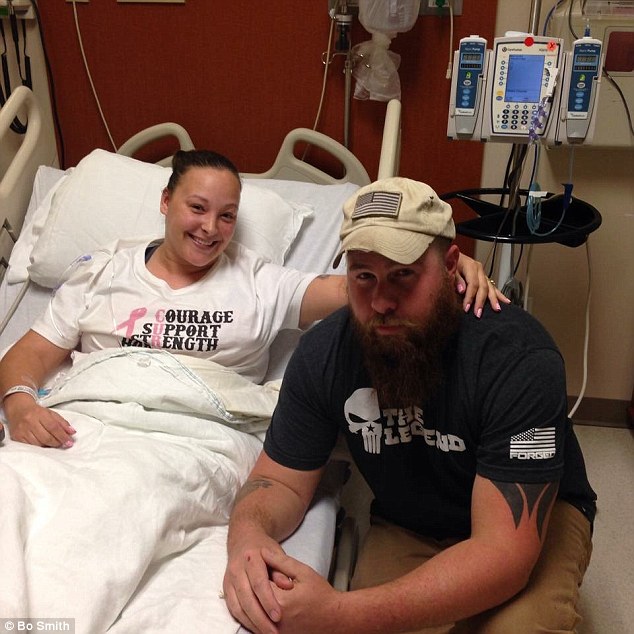 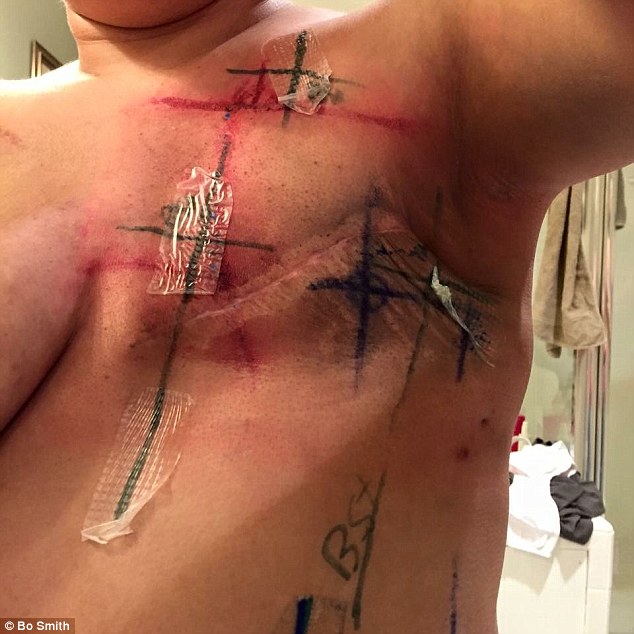 Bo explained how she had a mastectomy of her left breast (above, after her operation) but opted to keep her right breast so she could have a chance to breastfeed her future children

After undergoing radiotherapy, Bo was told that she was in complete remission, but discovered the cancer treatment had affected her fertility.

What is inflammatory breast cancer?

In inflammatory breast cancer, the cancer cells may not grow as a lump that can be felt in the breast.

They grow along the tiny channels (lymph vessels) in the skin of the breast. This blocks the vessels.

The body reacts to the cancer cells in the lymph vessels and the breast becomes inflamed and swollen.

Inflammatory breast cancer can spread more quickly than other types of breast cancer, so treatment is often started straight away.

‘Two years after treatments, I was cleared to try to get pregnant,’ she explained.

‘My doctor explained that we may have the best luck just going straight into IVF because of how my fertility was affected, but I wanted to try as naturally as possible in the beginning.’

Bo was then placed on a hormone therapy drug, letrozole, to help her conceive naturally. Three days before Christmas last year, she discovered the incredible news that she was pregnant.

‘I woke up and took a test, expecting a negative. It was positive! I took about 50 more just to be sure,’ she said.

Describing how it felt to welcome baby son James into the world, she said: ‘I felt I would never be here today.

‘I watched friends pass away from the same disease I had. I watched women lose so much and I thought there was no hope, but hope always. It’s there. Keep faith.’ 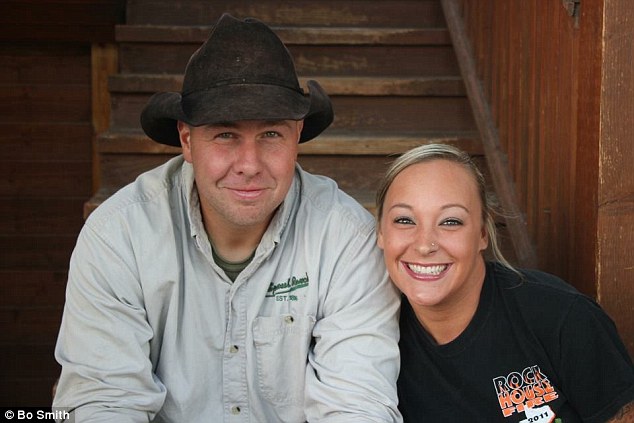 Bo (pictured with fiancé James) had just got engaged before being diagnosed with cancer, and had been busily making wedding plans 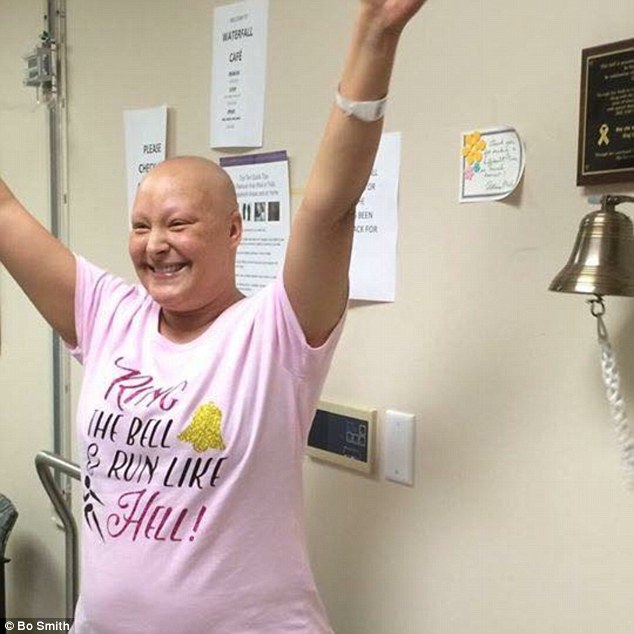 Bo (above, after receiving cancer treatment) was told that she was in complete remission after undergoing chemotherapy and radiotherapy 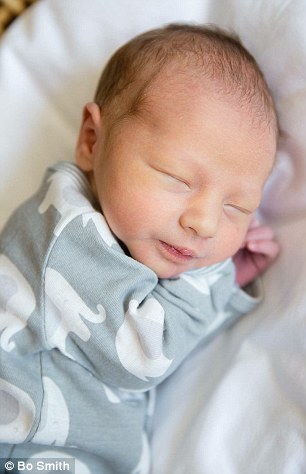 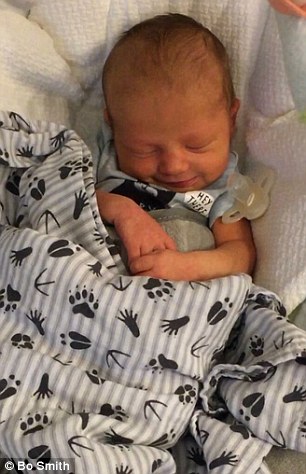 Bo explained how she ‘felt she would never be here today’ after being diagnosed with cancer. She gave birth to baby James (above), who is just 10 weeks old, this month

Explaining why she decided to post the picture on Facebook, she added: ‘I posted the image as a way to show that no matter what scars you hold, there are always ways to find a positive to them.

‘Yes, I lost my breast, but I still have my other one to feed my beautiful son. Scars are nothing more than a story of where you have been in your life, and you should be proud of them and yourself, for getting through whatever it was that got you them.’

Bo has received thousands of messages of support since sharing the powerful image on Facebook.

One wrote: ‘This brought me to tears.. so touching and beautiful’.

Another added: ‘This is one of the most beautiful pictures that I have seen, thanks a lot for sharing this beautiful moment in your life with us,…And a big hug for your lil one.’ 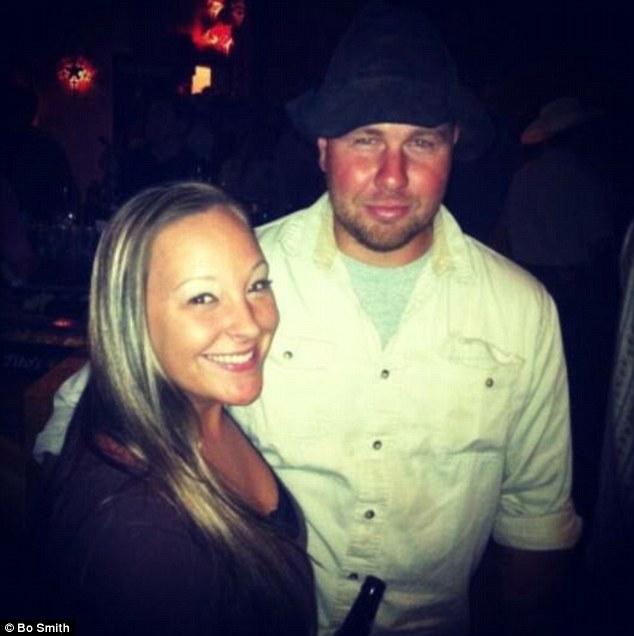 Bo (pictured with fiancé James) explained how she was placed on a hormone therapy drug, letrozole, to help her conceive naturally 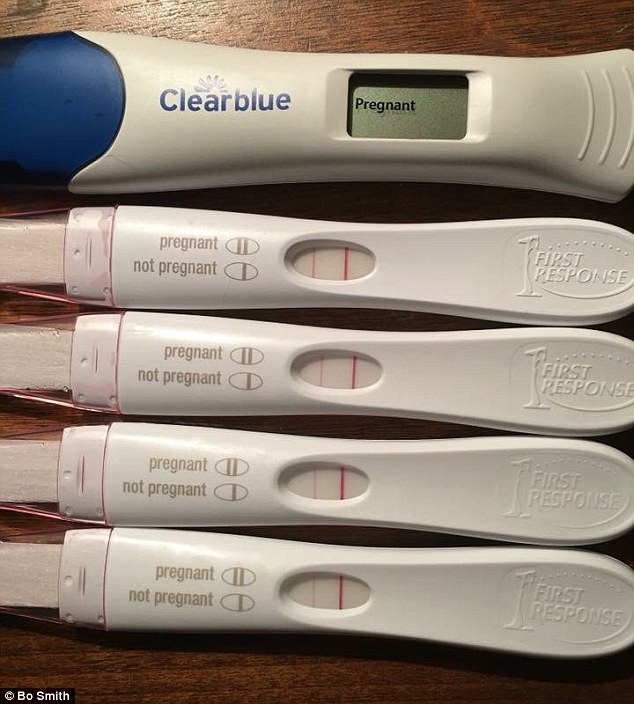 Three days before Christmas last year, Bo discovered the incredible news that she was pregnant. She explained how she took multiple tests (above) as she couldn’t believe it