They say that all you need to conquer the world is the right outfit.

So it makes sense that a very devious-looking, but well-dressed, star of a hilarious new viral photo has been accused by many a social media user of ‘plotting world domination’ – and all while wearing a fluffy puppy onesie.

The young girl’s photo has been bringing the laughs among Reddit users ever since it was posted to the site on Sunday by her father, who shared it under his username ProfPuffnStuff.

Too sweet: A viral photo shows an adorable little girl looking deviously happy about the dog costume her parents made for her

The image shows the adorable girl sporting a brown, furry onesie topped with a hood featuring the snout and ears of a dog made for her by her loving parents.

She is also standing near a dining room table and has caught the attention of her family’s pup, who appears to be mesmerized by the costume.

But surprisingly, it is not the clearly impressive craftsmanship that obviously went into the outfit that has caught the attention of social media users, but rather the child’s incredibly devious expression.

The unnamed youngster is seen in the picture clasping her hands together in front of her in a villainous pose, as she shows off a devious smile with a touch of side-eye, suggesting that she is soon to be up to no good. 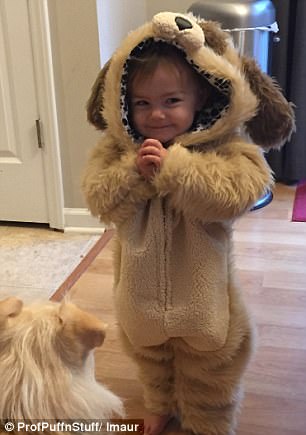 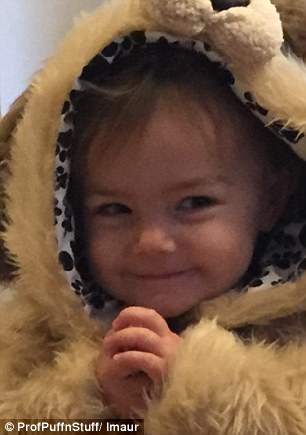 Zooming in: While the costume is impressive, it was her mischievous expression that grabbed the attention

Her father couldn’t get enough of her hilariously smug expression, so he decided to share it online.

‘My daughter is super excited about the puppy Halloween costume my wife and I made! Priceless reaction,’ he wrote.

He then shared three versions of the image, each one becoming more zoomed in on her mischievous expression.

Another added: ‘Oh god, she is so terribly cute and looks so much like she’s planning something devious (but cute), prolly involving Unicorns and Rainbows.’