This is thought to be the earliest known photo of legendary outlaw Jesse James at the tender age of 14 years old, when the baby-faced teenager was just a Baptist minister’s son from a prestigious farming family in Missouri.

In the Victorian tintype photograph taken around 1961, James stands stony-faced with slicked back hair, wearing a dark suit and leaning against a chair.

Just two years after the photo was taken, a Union militia attacked his family’s farm, spurning him to join the Confederate militia in the American Civil War, beginning his transformation into a ruthless killer.

After the Civil War, he turned to a life of crime – robbing banks, stagecoaches and trains before being shot dead by his fellow gang member in 1882 aged 34.

Now, collector Justin Whiting, 45, is set to sell the vintage image for thousands after the 45-year-old, from Spalding, Lincolnshire, bought the photo off eBay for a measly $10 (£7).

Whiting claims the picture is now worth thousands after authenticating the image with a 19th century photography expert and a forensic expert.

This is the earliest known photo of legendary outlaw Jesse James at the tender age of 14 years old, when the baby-faced teenager was just a Baptist minister’s son from a prestigious farming family in Missouri. 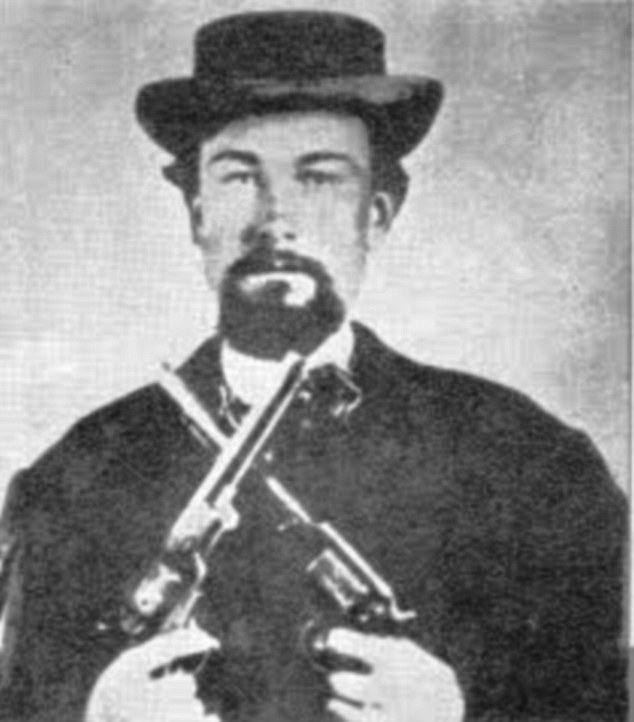 Just two years after the photo was taken, a Union militia attacked his family’s farm, spurning him to join the Confederate militia in the American Civil War, beginning his transformation into a ruthless killer. Pictured: James as an outlaw 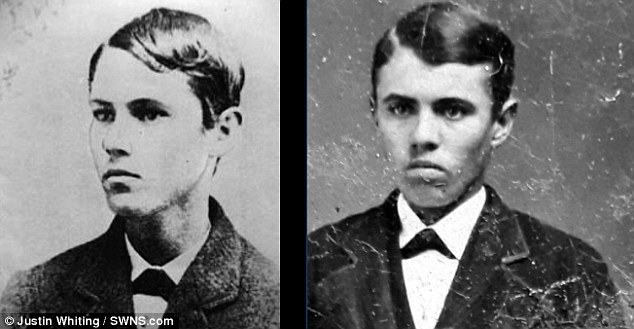 The photo of Jesse James (right) and an existing picture of the outlaw at a similar age (left). An expert confirmed the photograph was a genuine portrait of the bank robber and said it taken when the baby-faced outlaw was just 14 years old

His father, Robert S. James, was a slave-owning minister in Kentucky and farmed commercial hemp on a 100-acre farm before moving to Missouri.

James Sr died when James was just three years old. The minister had headed west to preach salvation to gold miners in California.

James’ mother, Zerelda, went on to remarry twice and by the time of her third husband, the family had acquired seven slaves.

Missouri was a border state, meaning it was between the free North and slave-owning South. It also neighboured Kansas, known in that era as ‘Bleeding Kansas’ due to the contested issue if slavery would be allowed.

As the Civil War was beginning to erupt, most of the tensions were coming from the Missouri-Kansas border, where James grew up, between pro-slavery and anti-slavery groups.

In 1863, James’ family farm was brutally attacked by Unionist soldiers and he eventually became a part of a guerrilla campaign against the North.

It was during this time he became a folk hero in his home state of Missouri for fighting against Unionists.

Following the war James became one of the most iconic characters of his era, gaining celebrity status by holding up banks, stagecoaches and trains along with his older brother Frank James.

He went into hiding in 1876 after most of his gang members were killed in bank robbery gone wrong in the small town of Northfield, Minnesota.

James spent six years on the run from the law, holing up with trusted gang members Charley and Robert Ford.

But as he went to dust a picture, Ford stood up and shot him in the back of the head before sending a telegram, asking for the $10,000 reward on James’ head. 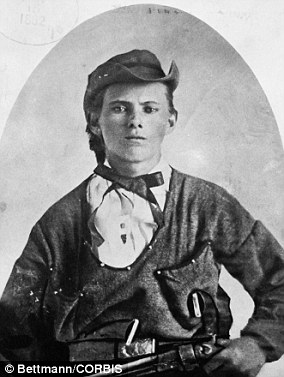 Legend of the West: A young Jesse James, armed with three revolvers, poses of a picture in the late 1800s

He is a Wild West legend and one of the most famous American outlaws of all time.

Jesse James rose to notoriety during the American Civil War when he and his brother Frank led a Confederate guerrilla force against the Union in their home state of Missouri.

After the war they fell into a life of crime – robbing banks, stagecoaches and trains as they rode in different gangs.

Jesse’s fate was sealed following a disastrous bank robbery in Northfield, Minnesota, when many gang members were captured or wounded.

They had chosen the Minnesota town because it was small and thought to be peaceable but most importantly there was only one bank. Newspaper stories had reported that a new safe and time lock and two heavy doors for the vault had just been added to First National’s building.

According to a detailed account of James’ life by the historian Mark Lee Gardner, the day they rode into Northfield, September 7, 1876, they were ‘at the top of their game.’

In the smoke and confusion a colleague, though he had been shot, made a run for it, bringing more shots from the robber. Soon everything began to unravel.

The town was alerted to the raid taking place. All of their money was held in that building – and all uninsured. They decided to fight.

The gun battle lasted less than 10 minutes. Panicked, the gang members who had been keeping watch dashed amid bullets as locals fought back.

Historian Mr Gardner stated: ‘While the townspeople were shooting to kill, the outlaws’ shots were really meant to frighten, to scare away, to buy time – at least in the beginning.’ 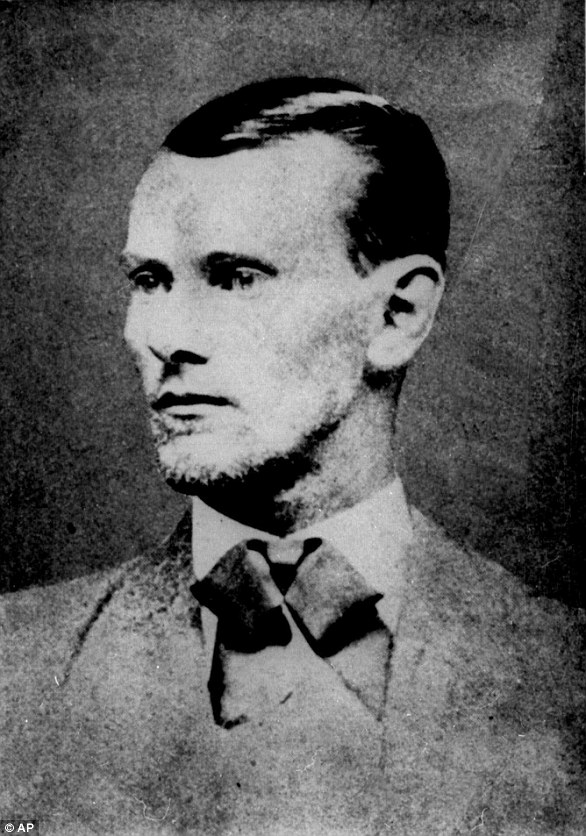 With a large bounty on his head, Jesse James was eventually shot and killed by Robert Ford, a member of his own gang

Keeping watch outside as panic grew, Cole Younger signalled the retreat: ‘For God’s sake,’ he shouted. ‘Come out. They are shooting us all to pieces.’

When it was over robbers Clell Miller and Bill Chadwell lay dead in the street. Bookkeeper Joseph Heywood had a bullet in his head and another local had been killed in the frenzy outside. The gang’s haul totalled just $26.60 ‘in coin and crip.’

Bob Coles had been hit. They left, six men on five horses and for the next 14 days evaded capture in what became the largest manhunt in US history.

More than 1,000 men chased them across marsh and woodland. Cole Younger later recalled: ‘We suffered in those fourteen days a hundred deaths.’

Jesse managed to slip away and live in St Jo under a false name, unaware there was a $10,000 bounty on his head.

But one morning, as the 34-year-old Jesse climbed on a chair to straighten a picture, he was shot in the back of the head by his fellow gang member Robert Ford.

Ford shot James down as he stood to adjust a picture in the parlour of his home. James was paranoid after a life on the run and had invited Ford and his brother Charles to live with him and his wife Zee and protect them.

‘Meet me in Kansas City tonight or tomorrow. I have my man,’ Ford’s telegram said to Thomas Crittenden, Governor of Missouri.

Crittenden had placed a $10,000 reward on Jesse, and $40,000 if he was taken alive, but no one really believed Jesse James would be taken alive.

Instead James, the man who had survived shooting battles and daring raids, died as he had lived; by the bullet and for bounty. 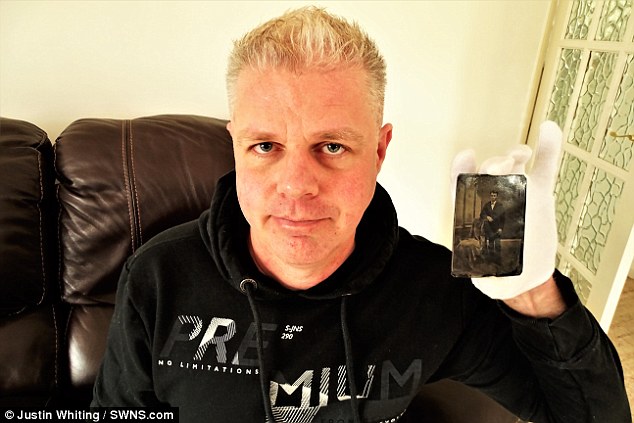 Now Justin Whiting (pictured), from Spalding, Lincolnshire, could sell the image for thousands of pounds after buying it for a measly £7 off eBay

Collector Jason Whiting purchased the vintage photo of the notorious US criminal in July 2017 and immediately tracked down Will Dunniway, a 19th century photography expert from California.

He was astonished when forensic experts confirmed his picture of the infamous Wild West outlaw was genuine and could sell for thousands.

Mr Whiting said: ‘Anything is possible on eBay so I kept buying the odd photograph for a few quid, like other people would buy a lottery ticket.

‘I thought to myself: ”Gee wizz, this could be a real photo!” I’ve been obsessed with American outlaws for years and read lots of books and study their faces.

‘The picture was identical to the one in my book, except it was full length. All my friends said it was the same but I knew I needed to contact experts.

‘I didn’t dare to believe they would say it was genuine.’

His expert report said: ‘The age of this image was about 1861-2 and is correct in every way to this period.’

‘When it is compared to the much used comparison image, I believe it was taken on the same day by the same photographer.

‘It is very evident by the face, haircut, jacket, shirt and tie that this is the same image of Jesse James at 14 years old. One of the originals.’ 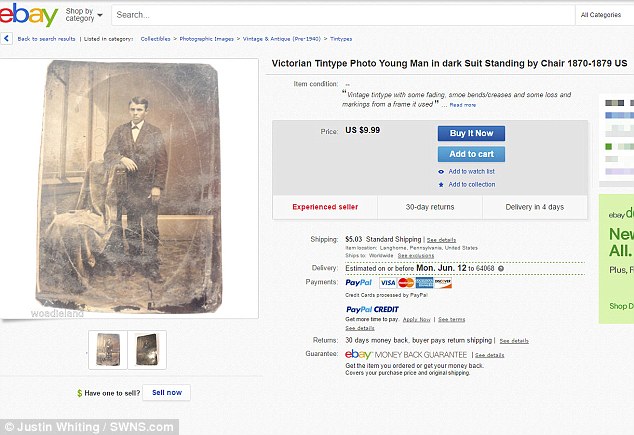 Mr Whiting then sent the 3.5 inches by 2.5 inches Victorian tintype photograph to Los Angeles forensic expert Kent Gibson who has verified evidence for the FBI.

Mr Gibson also confirmed the image was authentic and said: ‘All power to Justin. An authentic photograph of outlaw Billy the Kid sold for $5million in 2015 so the sky’s the limit.

‘Jesse James is a very famous outlaw so this is obviously a valuable image.’

Mr Whiting, who has been out of work since 2003 due to back problems, has already been in touch with posh London auction house Christie’s and is looking forward to spending his windfall.

He said: ‘I’m definitely selling it. I’ll be able to buy my own house and my own car. I can’t wait. Good things do happen sometimes.’

Mr Whiting isn’t taking any chances with his precious find.

He said: ‘I’m being super careful. That photograph is the most valuable thing I’ve ever had in my possession. It’s staying in my friend’s safe for now.’

The photo had been handed down through generations of Mills’ Missouri farming family and is thought to have been taken not long before Ford shot the notorious outlaw dead in 1882.

Mills’ family knew James and even harboured him while he was on the run in 1870s, but nobody believed it was a genuine picture of the gun-slinging bank robber – until Mills had the photo legitimised by experts.

A Colt .45 pistol used by James went up for auction in November 2013 and was expected to fetch up to $1.6million (£1million), but never sold and is still available.