A jaw-dropping photo shared by the US Geological Survey paints a particularly apocalyptic view of the Kilauea eruption in Hawaii.

Amid burning vegetation and bursts of hot lava, bright blue flames can be seen rippling through the cracks in the ground.

While it might make for an otherworldly effect, the cause of the phenomenon is actually quite simple; methane, which is released as the plants and shrubs catch fire, burns blue.

The blue flames captured in the image above are the result of methane gas seeping out of cracks in the ground. Methane, which burns blue, is produced as the hot lava burns plants and shrubs

The striking image was captured in the Leilani Estates Subdivision on Kahukai Street Wednesday night, according to the USGS.

Scientists at the site have been mapping the lava flows and assessing hazards.

The volcano is now on day 20 of the eruption, with magma continuing to feed into the lower East Rift Zone.

As the molten rock creeps across the land, burning everything in its path, the methane released in the process has spawned some remarkable phenomena – including blue fire.

‘When hot lava buries plants and shrubs, methane gas is produced as a byproduct of burning vegetation,’ USGS explained on Facebook.

‘Methane gas can seep into subsurface voids and explode when heated, or as shown in this image, emerge from cracks in the ground several feet away.

‘When ignited, the methane produces a blue flame.’

The effects of methane gas, however, aren’t always so pretty. Geologists have warned that methane explosions can send massive boulders hurtling through the air.

USGS has continued to provide updates about the ongoing eruption, as it still appears there’s no end in sight. 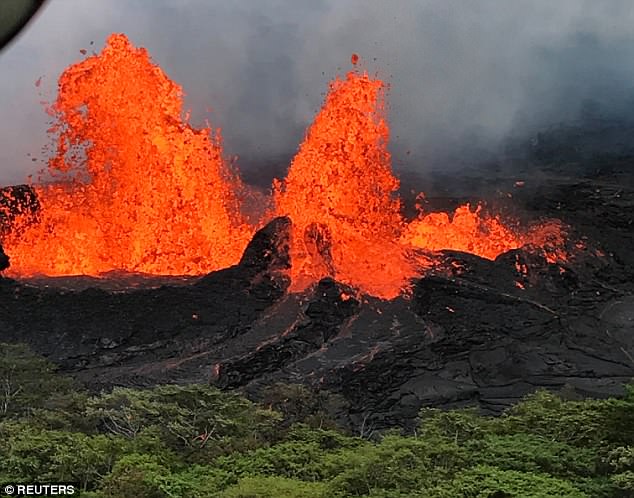 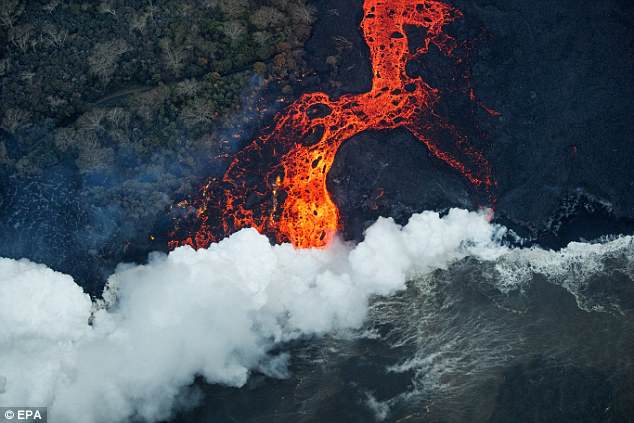 USGS has continued to provide updates about the ongoing eruption, as it still appears there’s no end in sight. ‘The ocean entry (shown) remains active and is producing occasional small explosions,’ USGS says

WHAT IS THE MOUNT KILAUEA VOLCANIC ERUPTION?

The Kilauea volcano on Hawaii’s Big Island has been erupting for more than 30 years but bubbled up in May 2018 after the volcano’s summit rose in the weeks leading up.

In recent years the volcano has mostly released lava in hard-to-reach areas inside a national park or along the island’s coastline.

Lava from the bubbling volcano has now destroyed 35 buildings and forced more than 1,700 residents to evacuate.

Researchers have tracked the event since it began but say there is no indication when the destructive lava flow will come to a halt.

This is partly because scientists are still unsure what started the sudden outpouring of lava.

‘Eruption of lava and ground cracking continues in the area of Leilani Estates and Lanipuna Gardens subdivision,’ USGS says.

‘The middle portion of the fissure system continues to produce the most robust eruptive activity in the Lower East Rift Zone.

‘The most active fissures have been 22,19, 6, 5, and 23. A faint glow was seen from Fissure 9, but no flows, and methane was observed burning in road cracks overnight. 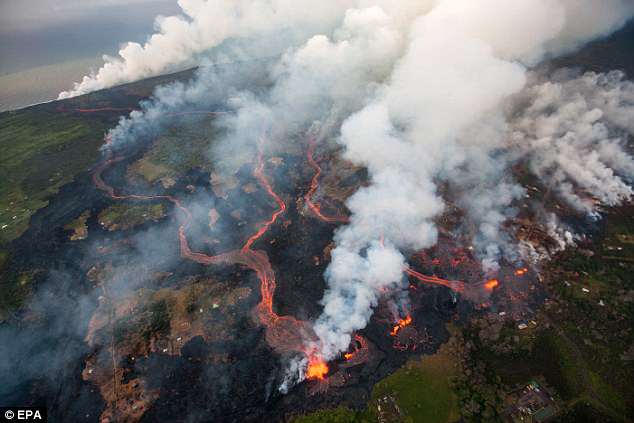 The volcano is now on day 20 of the eruption, with magma continuing to feed into the lower East Rift Zone

‘The ocean entry remains active and is producing occasional small explosions. Observers noted the height of the perched lava pond / channel had reached 11 meters / 36 feet above the ground level.’

The officials also say the summit area has continued to experience earthquakes at a moderate rate, and explosive events at the summoit could still produce downwind ashfall ‘at any time.’