Photographer captures harrowing aftermath of stabbing as boy, 16, fights for his life

‘The wound was very close to the heart…it’s crazy at the moment, it’s out of control’: Stabbing witness gives shocking account of how boy, 16, was left clinging to his life in the street after being knived by gang of three

This is the grave moment a 16-year-old boy lies collapsed against a brick wall fighting for his life after being stabbed in the chest in north London.

In yet another example of the knife epidemic plaguing the capital, the frail young man is pictured surrounded by paramedics desperately battling to keep him alive.

Freelance photographer Richard Hall heard the harrowing screams from his home in Archway shortly after 8pm on Monday and rushed out to discover the horror scene.

A shocking picture captures the grizzly aftermath of yet another stabbing in London. This time, a ‘skinny’ 16-year-old boy was knifed in the chest after three boys attacked him in Archway

Mr Hall, who is an Army veteran with first aid training, saw the knife wound near the boy’s heart and raced back to his home to retrieve a trauma pack.

He said: ‘I saw two white boys with their hoods up and one black boy pull a balaclava down.

‘There was shouting and they ran down the pathway and pulled knives from their waistbands and disappeared from view.

‘The next I heard was lots of screaming and thought someone was being mugged.’

Mr Hall and other residents tried to keep the boy awake and described him looking nearer 13 or 14-years-old and very ‘frail’.

Police arrived shortly after followed by an air ambulance while paramedics tended to the boy who was slipping in and out of consciousness and going into shock.

A police update this morning revealed the boy remains in a serious but stable condition. 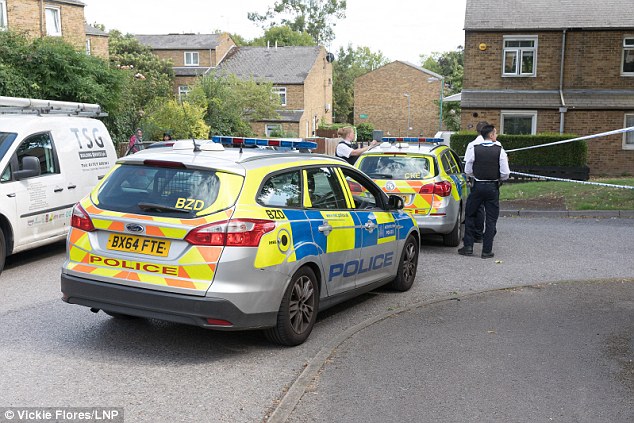 Police arrived shortly after followed by an air ambulance while paramedics tended to the boy who was slipping in and out of consciousness and going into shock. A police update this morning revealed the boy remains in a serious but stable condition 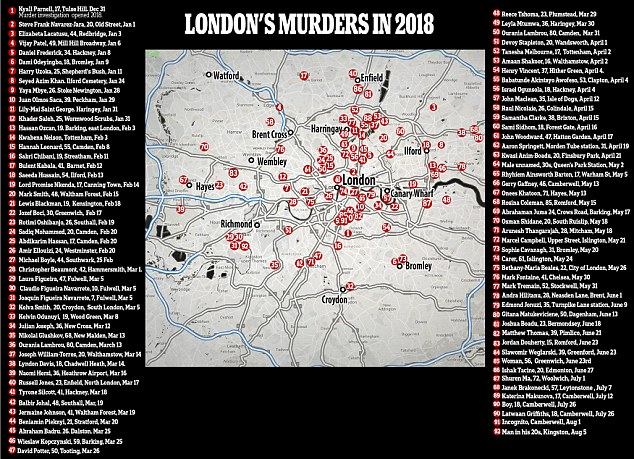 More than 90 murders have taken place across London in 2018

‘The wound was to the left of his chest, very close to the heart,’ Mr Hall added.

Describing the grizzly knife crime epidemic gripping London at the moment, the part-time photographer who owns his own construction company, said: ‘It’s crazy at the moment – it’s out of control.’

According to his neighbour, the three boys brandished their knives brazenly after being challenged moments before the horror stabbing.

‘It happened so quick it didn’t seem to be any major escalation it was like they just ran I didn’t hear any shouting or an argument – it was very brazen.’