Photographer captures the Northern Lights – from his PLANE WINDOW

Heavens above! Photographer captures the magic of the Northern Lights – including one image shot from a PLANE WINDOW

This incredible photo shows why you might want to pay more attention to what’s happening outside your window than on your TV screen next time you fly.

Award-winning Norwegian photographer Espen Bergersen, 38, was flying over northern Norway on a commercial Boeing 737 when he suddenly noticed bright lights dancing in the dark night sky.

To capture the elusive Aurora Borealis, Espen told MailOnline Travel used his jacket to cover the window to prevent glare from cabin lights and he held his breath to stop dew from forming on the glass.

To capture the elusive Aurora Borealis Espen told MailOnline Travel used his jacket to cover the window to avoid reflections from the cabin lights and he held his breath to stop dew from forming on the window. Thanks to his efforts, he managed to get an exceedingly clear image of the rare phenomena from his plane seat 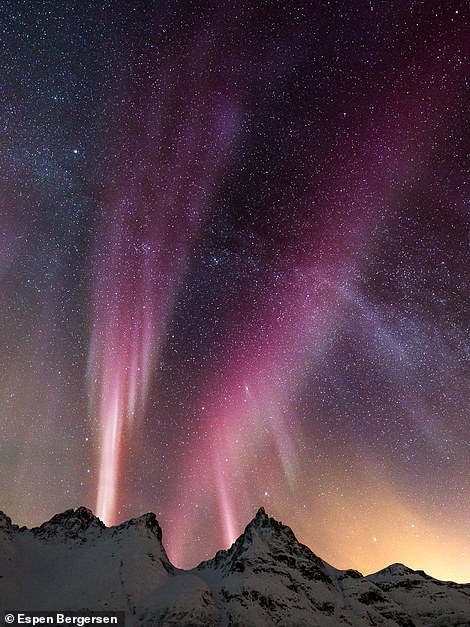 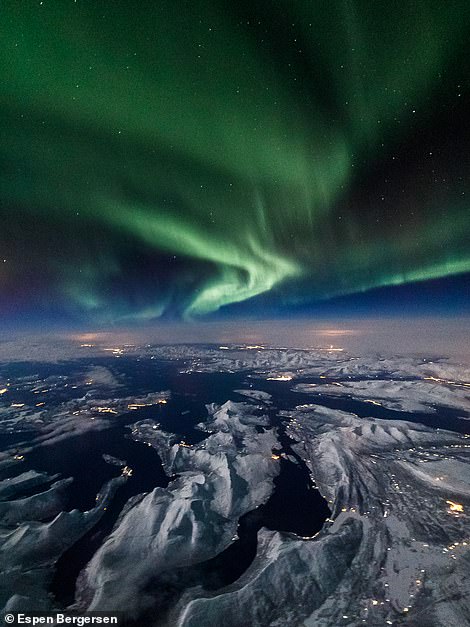 Espen has spent many years tracking the Northern Lights in Norway, venturing to remote spots with no light pollution (left). In Espen’s photographs taken from a plane, you can clearly see the northern lights shining over a frozen landscape with lights from small towns shimmering down below (right)

Thanks to his efforts, he managed to get an exceedingly clear image of the rare phenomena from his plane seat.

He explained: ‘I was sweating like a pig. Photographing the aurora from a plane can for sure be hard work!

‘I’m sure the stewardess was wondering what the hell the passenger hiding under a jacket was doing.’

In Espen’s plane photographs, you can clearly see the Northern Lights shining over a frozen landscape with lights from small towns shimmering down below.

In the distance you can see dramatic peaks forming part of the Lofoten archipelago. 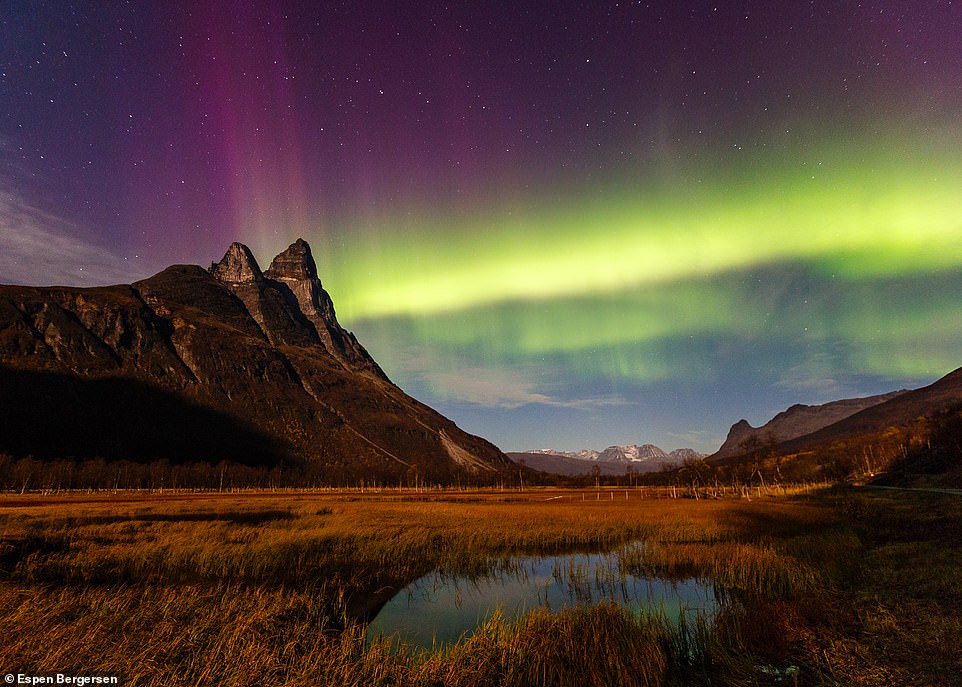 Espen says Otertind mountain, located in Troms, is a popular place to photograph the aurora, with the sweeping landscape being an extra bonus 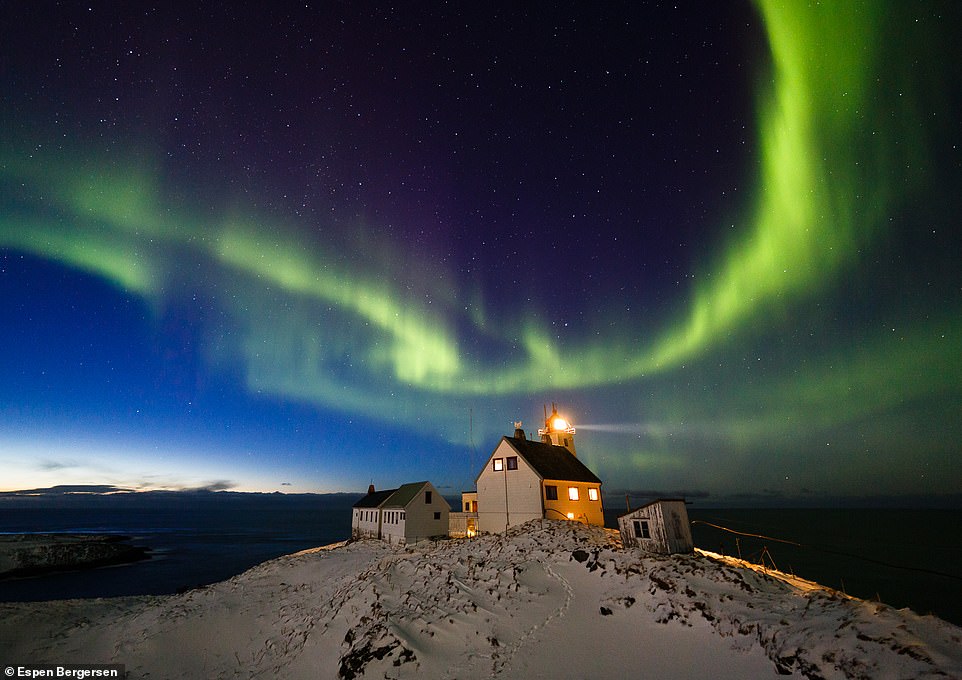 Magical lights snake above the lighthouse on the island of Hornøya, which marks the easternmost point in Norway. Espen says that the area is great for bird-lovers as there’s a large population of different species including puffin, kittiwake and guillemot 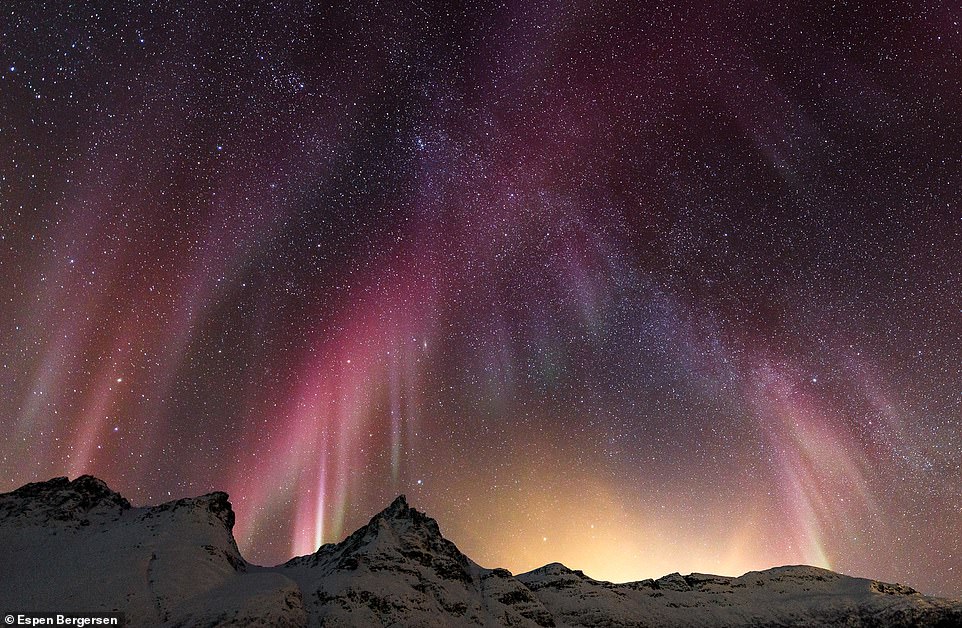 In this jaw-dropping shot, Espen caught the aurora blending in with the milky way. He says: ‘Red and violet colours are much rarer compared to the greens and they are also more difficult to see with the human eye. Modern cameras are more capable of capturing these colours but the images will never match what you witness in real life’

Luckily, the cameraman knew the best techniques to capture the lights in all their glory.

Espen has spent many years tracking the northern lights in Norway, venturing to remote spots with no light pollution.

Explaining how he captures his breathtaking images, he says: ‘Taking pictures of the Northern Lights is possible with most modern digital system cameras. I normally use a wide angle lens to cover a big portion of the sky.

‘Since the Northern Lights sometimes move very fast, I aim for the shortest exposure time possible. This allows me to get more structure in the moving light. A tripod is also a must in most cases.’

He added: ‘Nobody’s an expert from the beginning and I am constantly learning and improving.

‘If you know the basics, it’s quite easy to get a picture of the Northern Lights.

‘The difficult part is to get a technically good picture with a nice composition that stands out from the crowd.’ 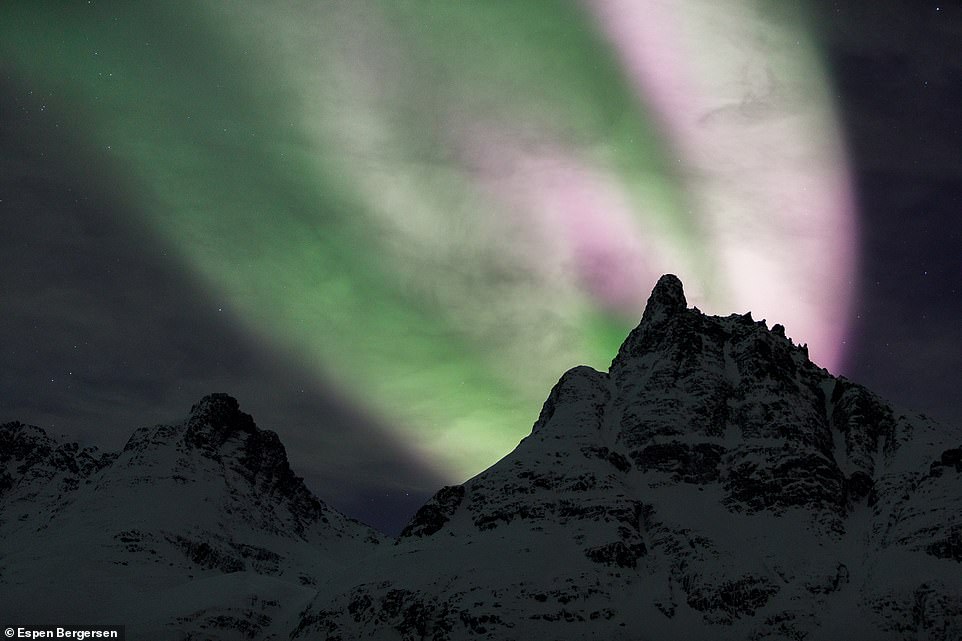 The northern lights look particularly bright in this striking image, taken on the mountain of Piggtinden in Troms 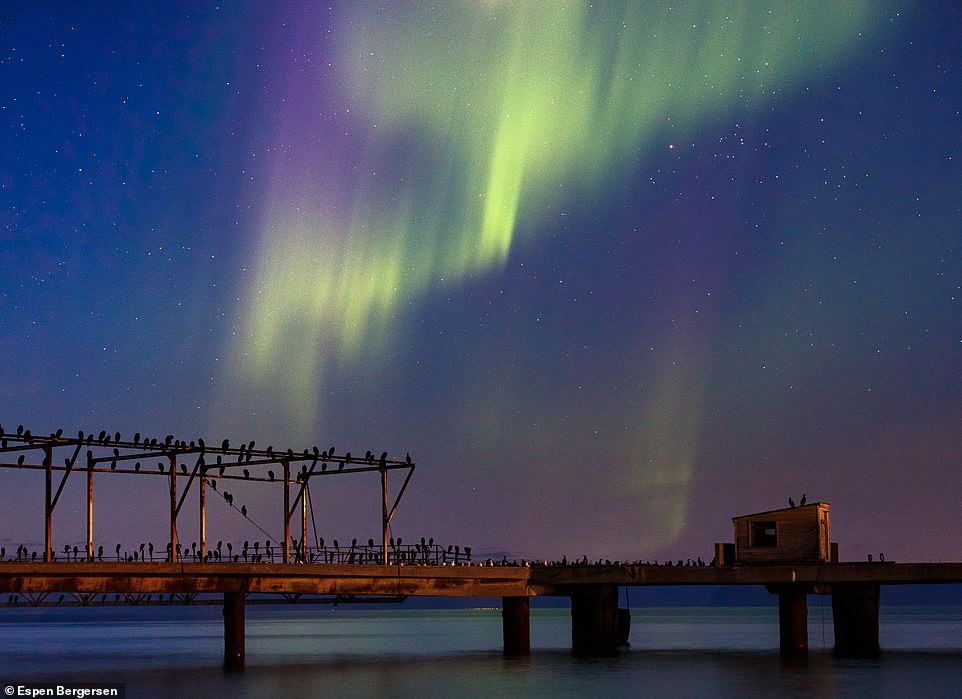 A group of cormorants perch on a quay while the aurora dances over their heads. This shot was taken in  Kvalnes, Andøya 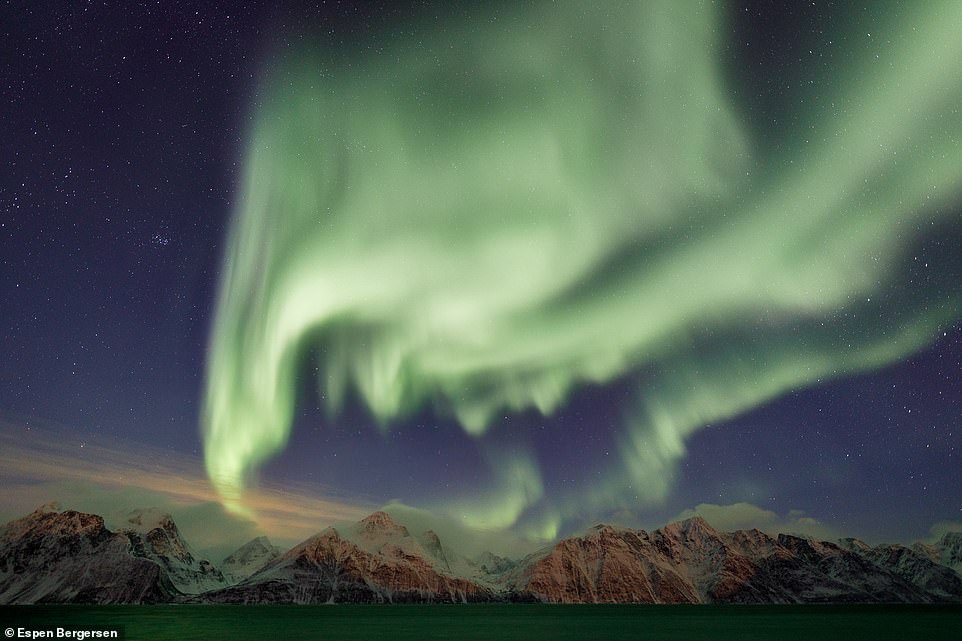 Espen says the reflections of the aurora makes the ocean appear green in this photograph. The mountain range in the  background is the Lyngen Alps, which is a popular place for alpine skiing 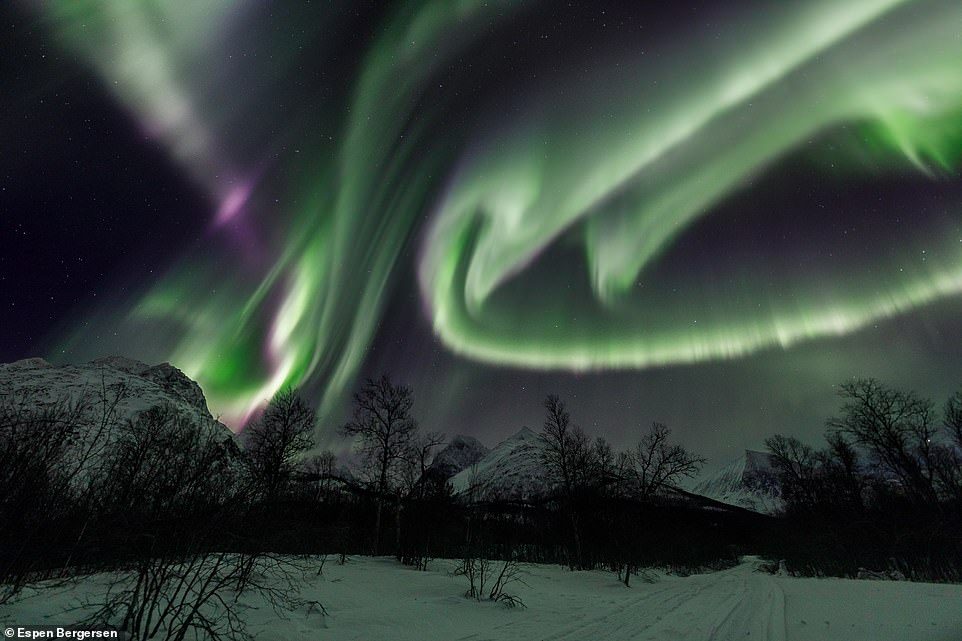 Espen said he took this image on January 31 this year outside the village of Lakselvbukt when earth was hit by a geomagnetic storm. He explained: ‘The most intense part of the northern lights lasted for 30 minutes and it was the most amazing display I have ever seen! I had goosebumps all over and a lot of ‘wow’ words came out of my mouth’ 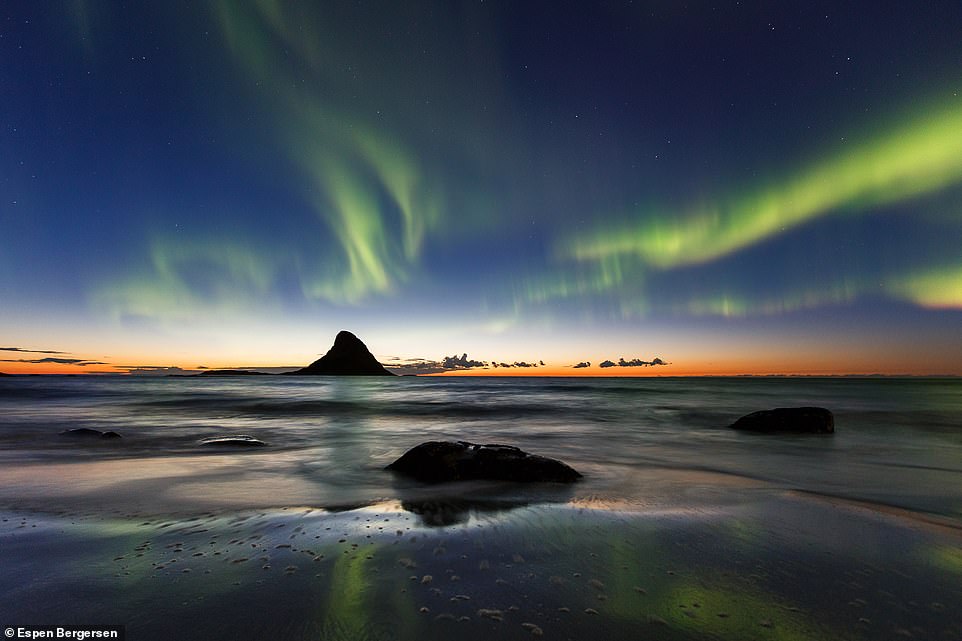 Espen says of this photo, taken on the island of Andøya in Norway: ‘If you are lucky, you might photograph the Aurora when you still have some orange light from the sunset’