Stunning landscape images show a 10-mile-long lake that formed after rare torrential downpours in Death Valley, California, which is one of North America’s hottest and driest locations.

Photographer Elliott McGucken was in Death Valley to photograph the storm and its aftermath on March 7, when he happened upon the temporary lake and began to take images of it.

Stunning images show a 10-mile-long lake, (pictured), that formed after torrential downpours last March in Death Valley, California, which is one of North America’s hottest and driest locations 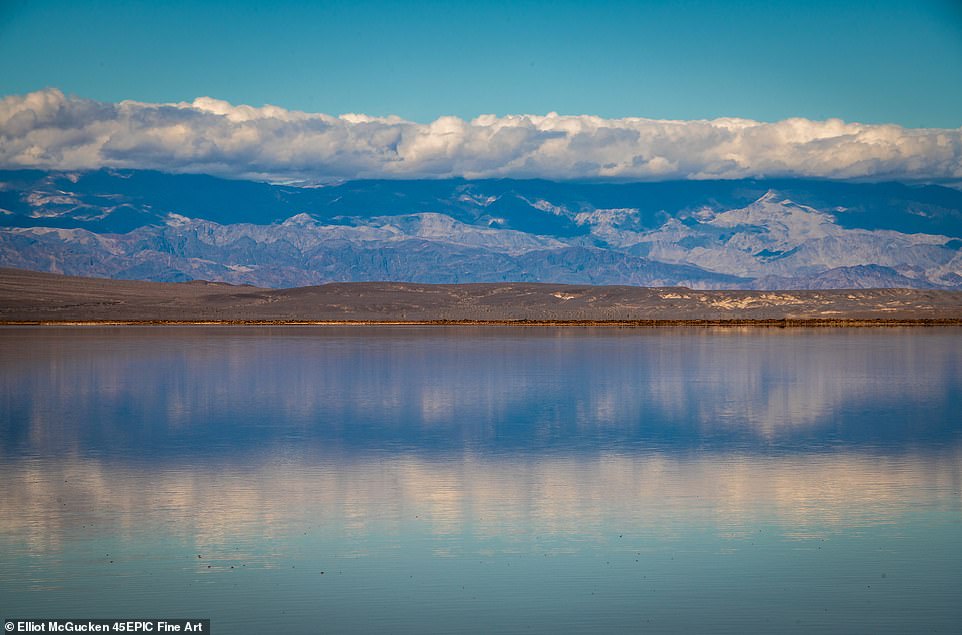 A huge lake has formed in near Salt Creek last week after a storm packed with tropical moisture affected Southern California, triggering flooding on several roads within the grounds of the national park

And the stunning series of otherworldly images have been picked up by several news outlets at home and aboard and have been widely shared on social media, with hundreds of users commenting on them since they were first published in March.

McGucken was planning to visit Badwater Basin to take some photos after the storm had passed through the area. However he could not reach that lake because the other, larger lake along Salt Creek blocked the way.

The National Park Service estimates that the picturesque lake, which has not yet been given a name, stretches about 10 miles.

‘It’s a surreal feeling seeing so much water in the world’s driest place,’ McGucken, who also writes books on physics told the San Francisco Gate. 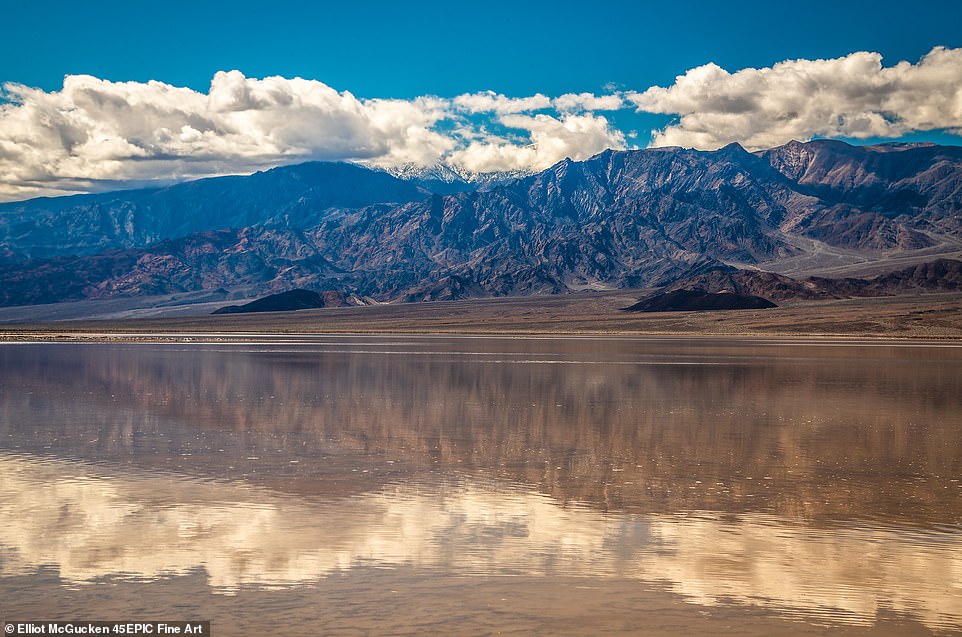 Photographer Elliott McGucken was in Death Valley to photograph the storm and its aftermath on March 7, when he took images of the temporary lake 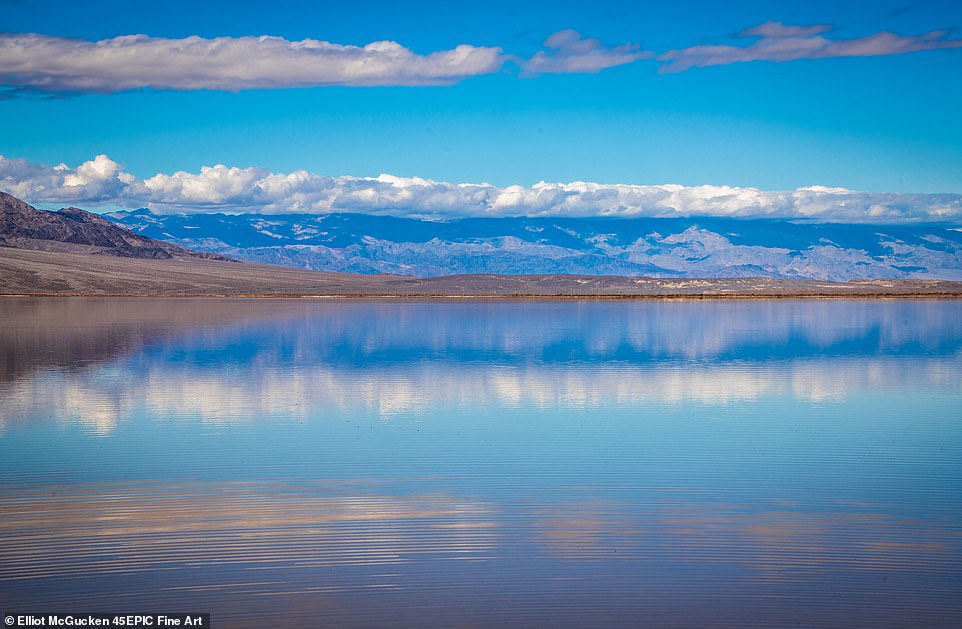 McGucken was hoping to photograph Badwater Basin where he thought water might have also accumulated, but he couldn’t access the area due to flooding and stumbled upon the ethereal lake

‘There’s an irony even though I couldn’t get down to Badwater Basin. Overall, I think these shots are probably more unique.’

McGucken said Death Valley is usually windy blustery conditions were creating ripples on the water when he first happened upon the lake. ‘Then, the wind died down and it got really calm,’ he said.

This enabled him to capture a selection of images as reflection of the rugged Panamint Range, its tallest Peak frosted in snow, can be seen in the crystal clear waters. 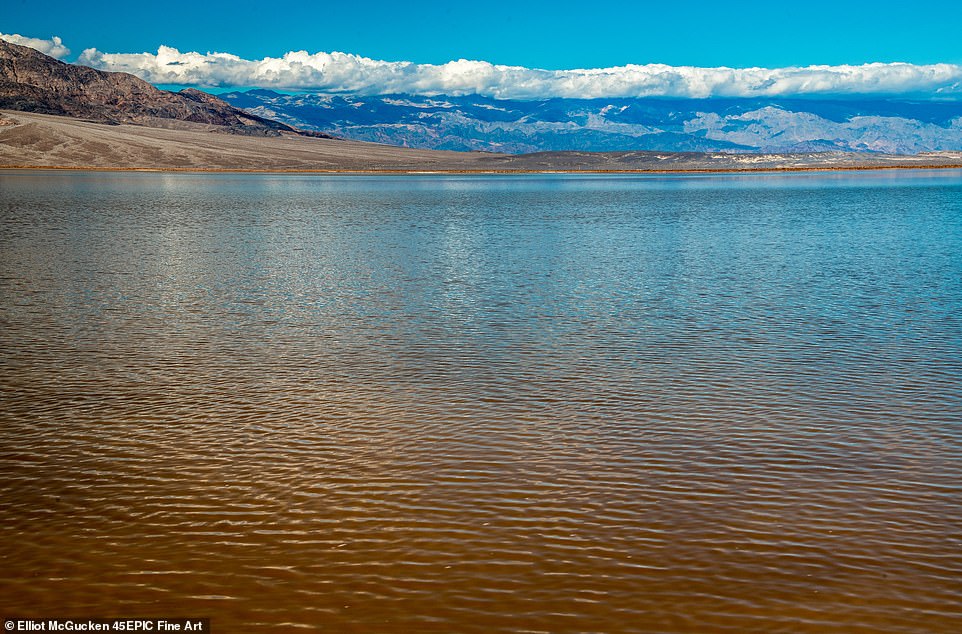 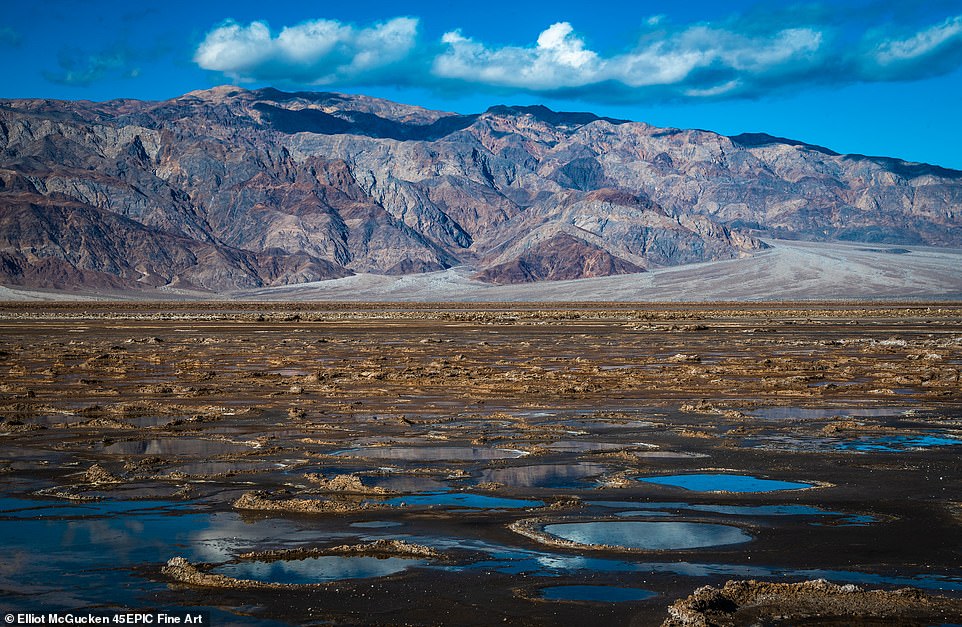 In composing the photograph, McGucken set the horizon at the golden cut in the height of the panorama and used a golden ratio in the composition, which is a classical technique in art oft referred to as the ‘divine proportion’

‘Nature presents this ephemeral beauty, and I think a lot of what photography is about is searching for it and then capturing it,’ he said.

The exact length of the lake is unknown, but the park emailed a statement to McGucken estimating it’s about 10 miles long.

The park said in an email: ‘I believe we would need aerial photos to accurately determine the size. From the road, it looks like it stretched from approximately Harmony Borax Works to Salt Creek right after the rain, which is a little less than 10 road miles. 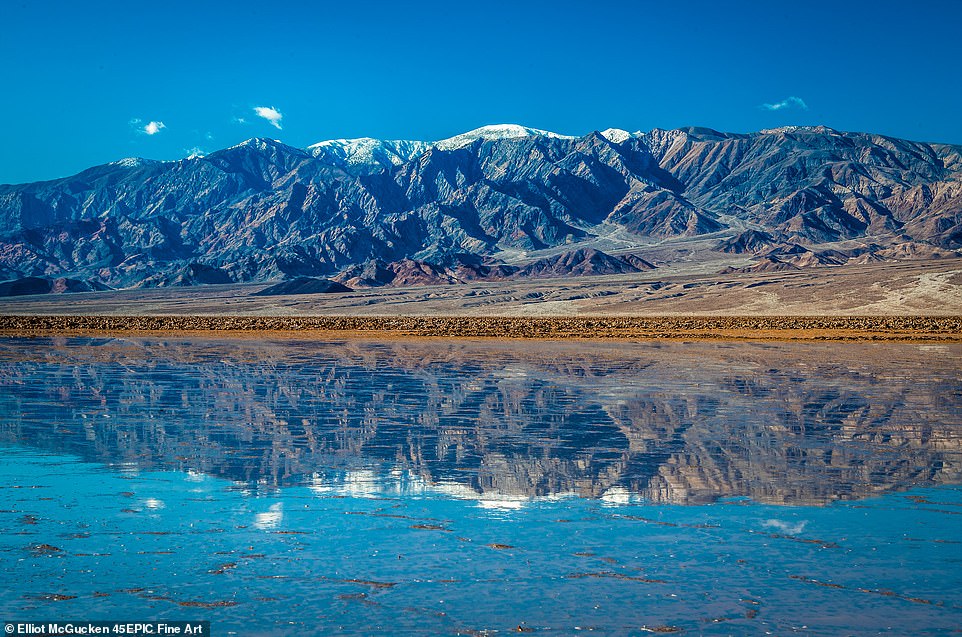 Patrick Taylor, chief of education and interpretation, claimed that he had never seen a lake of that size near Salt Creek in the six years he has worked in the park

The Park received .87 inches of rain over March 5 and 6, which is almost three times the average for that month in a given year

‘But, the road does curve a bit, so it’s not an entirely accurate guess.’

It is understood that flooding occurred because on March 5 and 6, the Park received .87 inches of rain, almost three times the average for March. The downfall represents about one-third of Death Valley’s total annual precipitation, Pam Wright of Weather.com told Smithsonian.com.

Because soil in the desert is completely sapped of moisture and due to its compacted nature, large amounts of water or rain cannot be absorbed quick enough.

‘Because water is not readily absorbed in the desert environment, even moderate rainfall can cause flooding in Death Valley,’ Weather.com meteorologist Chris Dolce explains. 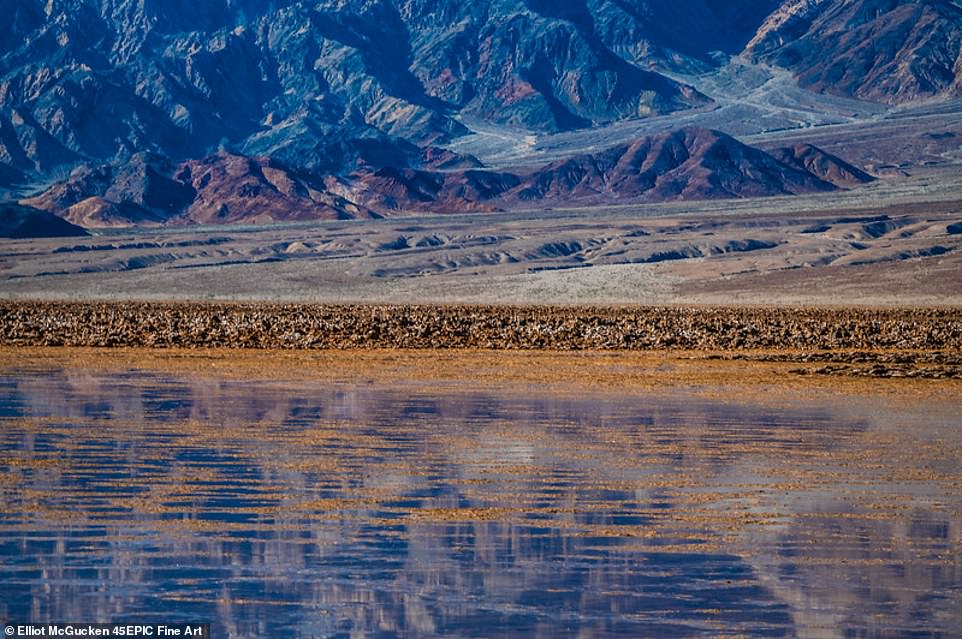 ‘Flash flooding can happen even where it is not raining. Normally dry creeks or arroyos can become flooded due to rainfall upstream.’

McCucken said of taking the images: ‘I was not too surprised that it took a couple hours to hike to the water’s edge, as the lake grew and grew, until it did indeed become quite vast.I had planned to visit and photograph Badwater Basin that day, but the flooding had closed the roads leading out that way.

‘In composing the photograph, I set the horizon at the golden cut in the height of the panorama, thusly using the golden ratio in the composition–a classical technique in art oft referred to as the ‘divine proportion.’