For most people of a certain age, being faced with recreating a photo 17 years after it was first taken is a bittersweet if not slightly daunting prospect.

Yet photographer Josephine Sittenfeld set out to do just that, snapping updated versions of portraits she took of her college classmates at Princeton University in 2000.

And despite the 17 year gap, almost every person ended up taking on an almost ageless persona —  including actress Ellie Kemper, who after graduating shot to fame on the hit TV show The Office. 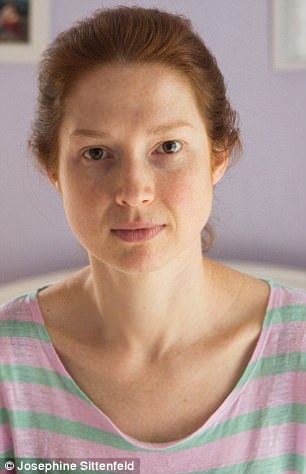 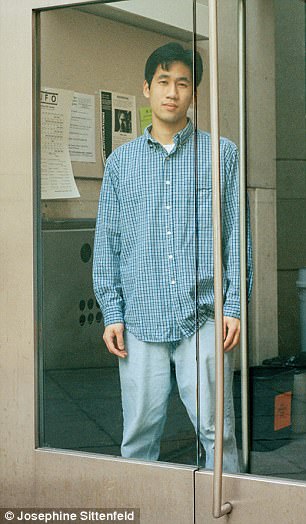 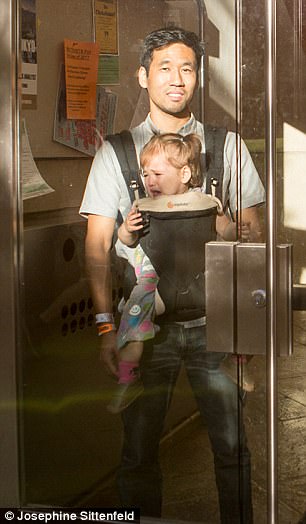 Mirror mirror: In the series, Sittenfeld has recreated photos originally taken in 2000 (pictured left, a classmate named Larry in 2000, and right, in 2017) 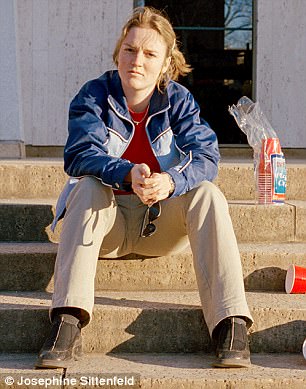 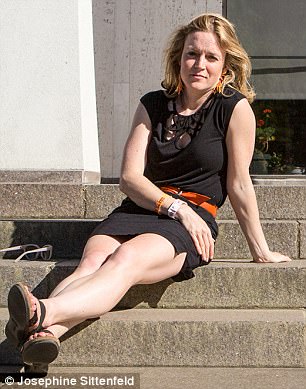 Old school: Sittenfeld captured her Princeton classmates on a medium format film in 2000, including Aili, pictured left in 2000 and again in 2017, right

Named ‘Reunion,’ the series first started when Sittenfeld and her subjects were juniors at Princeton University and has since appeared in The New Yorker.

In 2000, she photographed her friends on medium-format film and exhibited the finished results on campus.

But after college, the shots were largely forgotten about until Sittenfeld decided to dig them out last spring, ahead of her 15-year reunion.

It was at this point that she decided to experiment with each of her former subjects by asking them to mimic the exact pose of her earlier shots. 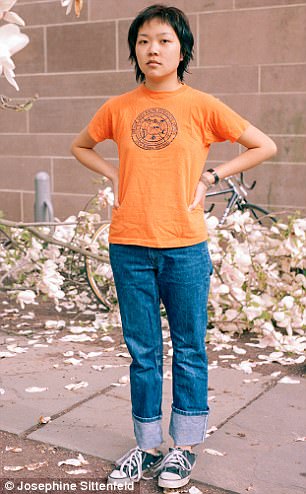 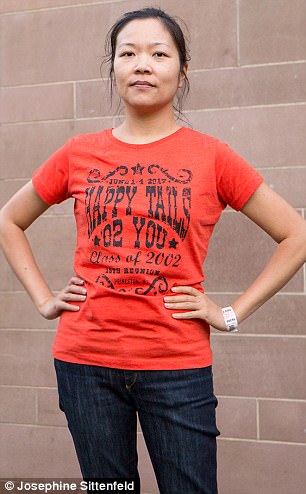 Flower power: Josephine says she forgot about the pictures until she was preparing to attend her 15 year reunion (Classmate Eveline pictured in 2000, left, and in 2017, right) 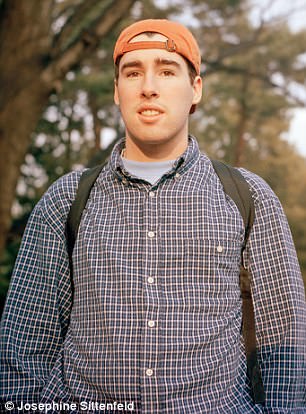 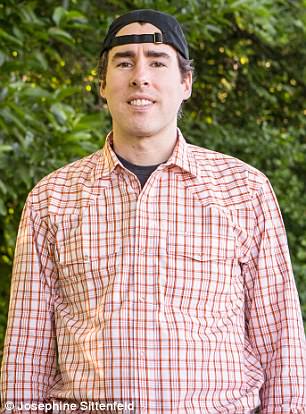 Happy camper: Chris, pictured left in 2000 and right in 2017, looks happier in his ‘after’ shot, much like each of the other subjects in the series 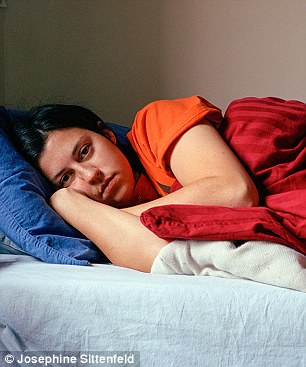 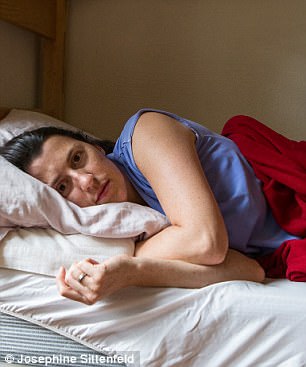 Selfie: Photographer Josephine also posed for self-portraits in both sets of snaps (left in 2000 and right in 2017)

Time after time: Despite nearly two decades passing, the modern versions of each scene somehow don’t look out of place (Ethan pictured in 2000, left, and 2017, right)

The ambitious project meant that not only did Sittenfeld have to hunt down each of her classmates, but she also had to find an undergraduate who would let her use the dormitory as a backdrop.

In the original shots, Sittenfeld’s subjects can be seen partaking in typical student pastimes — lying in their beds, lounging in their dorm rooms, and hanging out on campus.

But despite nearly two decades passing and book bags being replaced with baby slings, the modern-day versions of each scene somehow manage to not quite similar. 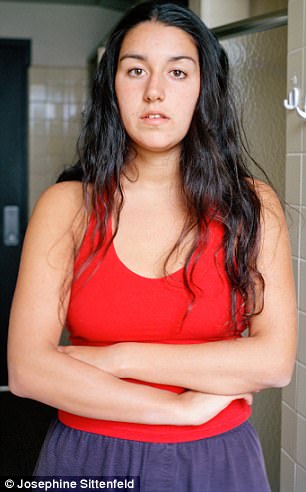 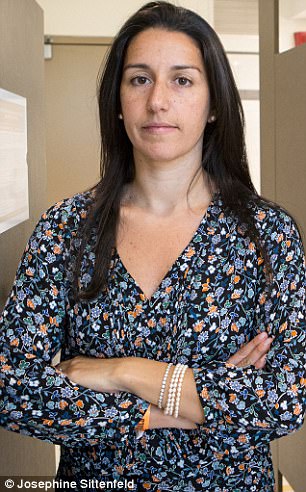 Bathroom break: Classmate Olympia posing in a bathroom in 2000 (left) and posing in the same space in 2017 (right) 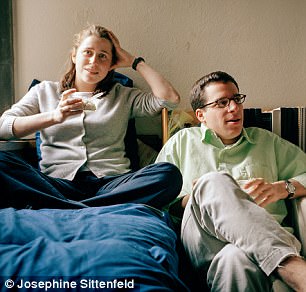 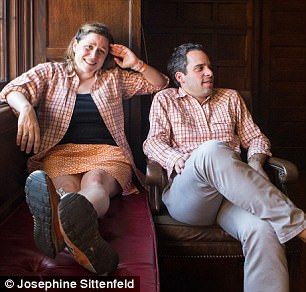 Coupled up: Tenley and Ryan photographed in 2000 left and in 2017 right 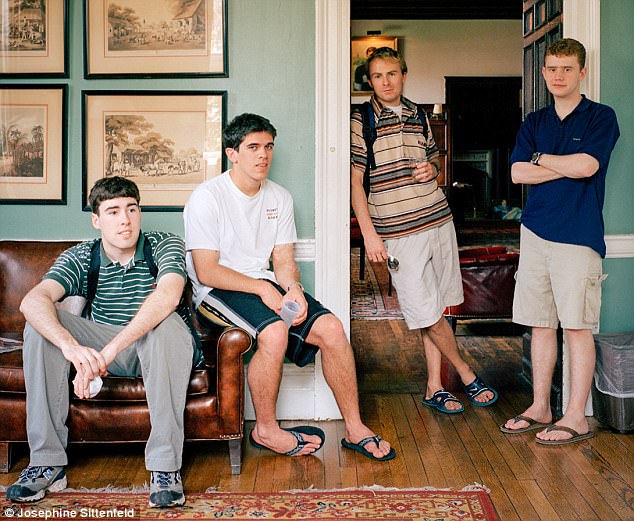 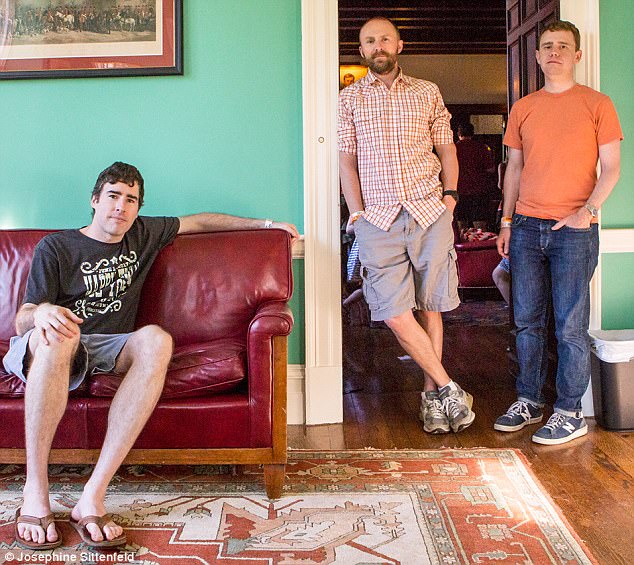 Missing link: Left to right, Chris, Sam and Seth (minus Connor) in 2017

Even Kemper, who did not attend the reunion and agreed to be photographed in Sittenfeld’s home in Providence instead, looks like she could pass for an undergrad in her 2017 snap.

However, the one glaringly obvious difference – apart from age – is how much happier each of Sittenfeld’s subjects seem.

‘At twenty, I felt something intangible, indescribable, full of energy,’ said one of Sittenfeld’s former roommates in an accompanying Q&A. ‘Only now am I able to describe it — the ultimate sensing of a life ahead.’