Photographer who verified Kate Upton’s claims is branded a hypocrite

The celebrity photographer who corroborated Kate Upton’s claim that Guess co-founder Paul Marciano sexually harassed her has been branded a ‘creep’ and a ‘hypocrite’ by a top male model, DailyMail.com can reveal.

Fashion photographer Yu Tsai said he was working with supermodel Upton on a photo shoot in 2010 during which he claims Marciano grabbed her breasts – allegations the designer has vehemently denied.

But a prominent male model who has worked with Tsai says the photographer is a ‘hypocrite’ for being the only person to say he can substantiate Upton’s claim when his own conduct is questionable.

The model, who has spoken on condition of anonymity through fear being named could jeopardize his career, claims Tsai sexually assaulted him in July 2012.

He says the photographer slapped him on the butt in an act of sexual aggression following a catwalk show for the 30th anniversary of Guess in Los Angeles.

This comes as emails seen by DailyMail.com reveal Tsai sent dozens of gushing messages to Marciano after the alleged incident with Upton. 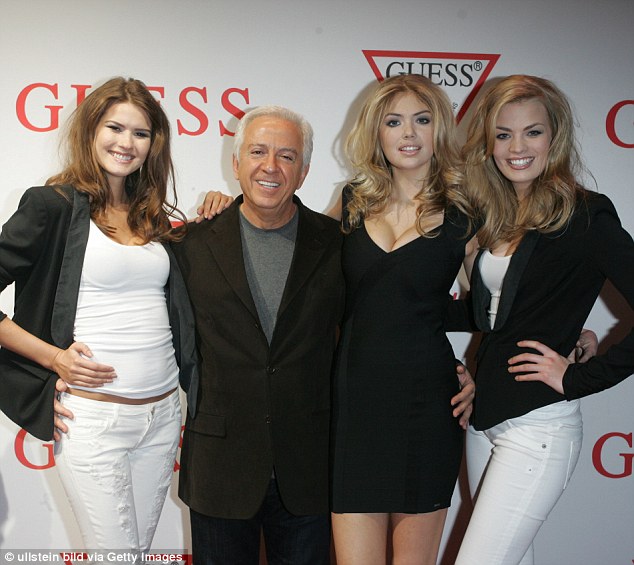 Allegations: The 25-year-old model, who has worked on numerous Guess campaigns, first publicly accused the fashion designer (center) on social media in January. She claimed Marciano groped her breasts during a photo shoot

In one email sent in July 2010, immediately after Upton alleges Marciano groped her, Tsai says Upton asked him for Marciano’s phone number so she could thank him for some Guess clothing she received.

In another email sent the following month, Tsai messages Marciano saying he’d ‘love’ to do another shoot with Upton.

‘I want every to know KATE is a GUESS girl…brand her..so we own her image.’

And in an email in May 2012 Tsai messages Marciano, saying: ‘I am so proud and so honor [sic] to have build this amazing relationship with you…I love and respect you greatly.’

His emails expressing admiration for Marciano and Guess continued right up until eight days before Upton made her claims on social media earlier this year.

His and Upton’s story is now coming under scrutiny.

The male model who claims Tsai is a ‘hypocrite’ told DailyMail.com: ‘It was the 30th anniversary of Guess and they had an event in downtown LA at the company headquarters.

‘There was a rehearsal thing with all the models present and we were all sitting around waiting when Yu Tsai came in.

‘He’s always been a little bit uncomfortable to be around, even on the campaigns, he’s very outlandish, flamboyant, but people can be that way in fashion.

‘All the models are there and he’s calling everyone b****es, giving it, ‘hey b****es, you better be nice to me if you want to be in the next campaign,’ things like that.

‘I wasn’t happy with what he was saying so I told him, “I don’t work for you, I work for Guess” and we exchanged a few words. 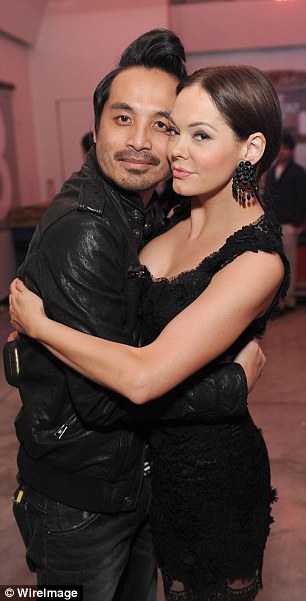 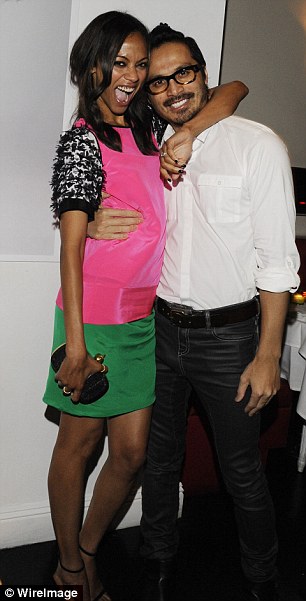 Celeb status: Tsai is a well-known photographer in the fashion world having shot some of the biggest names in modeling. Above he is pictured with Rose McGowan (left) and actress Zoe Saldana (right) 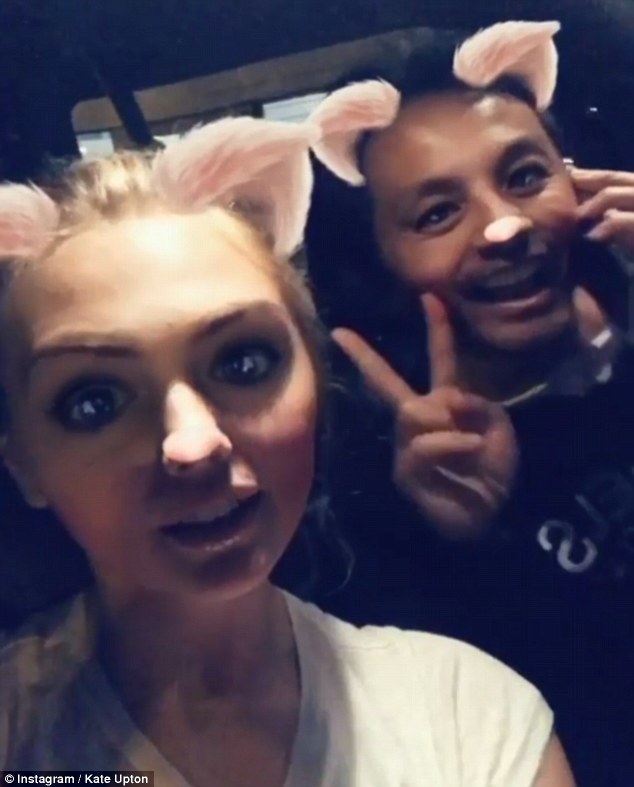 Friends: A male model has now come forward claiming Tsai slapped his backside during a Guess runway show. Tsai and Upton are seen together having fun with animal filters in an Instagram photo posted on her account.

‘Then later on, after the show, we were all having a few drinks and he came over and slapped me on the a**.’

The model, from Europe, said he was furious.

‘I was shocked, I turned around and grabbed him around the throat and said, “don’t f***ing touch me, don’t ever grab me again,” everyone was a bit shocked by my reaction,’ he recalls.

‘The next day I called the people at Guess and apologized for my reaction but told them I don’t appreciate people grabbing me sexually like that, especially a man.

‘The guy is creepy, I don’t like the guy, he was a bit of a pest. I’m not going to stand for someone slapping me on the a** and throwing their weight around just because they think I should be scared of them and it might get me in the next Guess campaign.’

The model – who has appeared in several Guess campaigns and represented other major brands on the catwalk – felt compelled to come forward after reading that Tsai had backed Upton’s claims of sexual misconduct against Marciano.

He said it was ‘rich’ given what he knew about Tsai – a prominent photographer who has shot some of the biggest names in fashion.

‘I’m not after publicity, I’m still working, I’m busy, but I just thought that out of all the people to be making accusations it was a bit rich coming from him,’ he said.

‘Yu Tsai is a hypocrite, the notion that someone calling out sexual harassment while being a sexual harasser themselves doesn’t sit right with me.’ 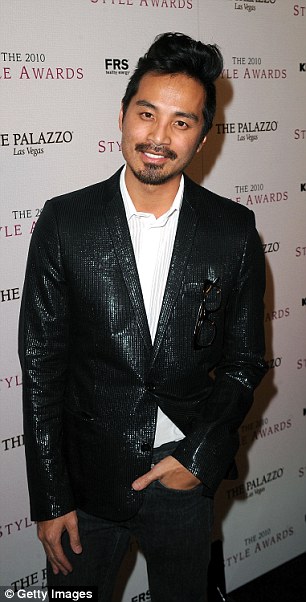 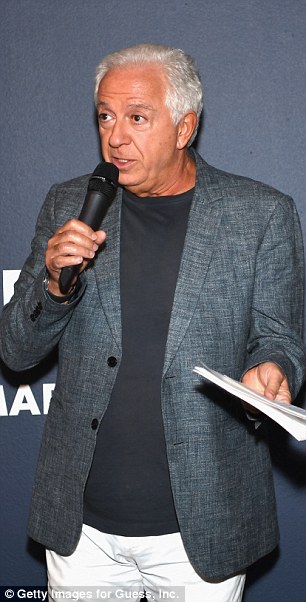 Emails obtained by DailyMail.com show the photographer had sent messages of admiration to Marciano, just days before the model went public with her claims. He then corroborated Upton’s story saying he witnessed the designer grope her

The model’s account was backed up to DailyMail.com by a witness who says they saw what happened that night.

The witness, another European male model who regularly works for Guess, said Tsai had behaved inappropriately.

‘I didn’t have any conflict with Yu Tsai at all, but I saw what happened that night,’ said the model who also asked to remain anonymous.

‘He grabbed another model on the ass in front of everyone, he touched him inappropriately, I believe it was after the show.

‘The guy said something, there was a whole scene and Yu said, ‘Okay, well I guess you’re not gonna be in the next campaign’, something like that.

‘Yu was trying to be a little pushy with every model, male and female, all day.

‘He was trying to be an entertainer to look good in the eyes of the management.’

Emails requesting comment from Yu Tsai and his representatives did not receive a response.

Supermodel Upton rocked the fashion world in January and February with disturbing allegations that Marciano had grabbed her breasts on a photo shoot and made a series of unwanted sexual advances.

She even claimed she was forced to walk away from a $400,000 Guess campaign in 2012 because she was reportedly wary of Marciano’s behaviour.

Marciano, 65, has fervently denied the allegations and in a statement he called Upton’s story ‘absolutely false’ and ‘preposterous’.

‘I have never been alone with Kate Upton. I have never touched her inappropriately. Nor would I ever refer to a Guess model in such a derogatory manner.

‘I fully support the #metoo movement. At the same time, I will not allow others to defame me and tarnish my reputation. ‘I have pledged to Guess and its Board of Directors my full support and cooperation with a fair and impartial investigation,’ Marciano said.

Upton first hinted at the allegations when she tweeted: ‘It’s disappointing that such an iconic women’s brand @GUESS is still empowering Paul Marciano as their creative director #metoo’.

She then expanded further on her comment in a TIME interview last month.

Upton claimed Marciano assaulted and started harassing her when she was 18 the first time he met her – the day after the shoot for her first professional modeling campaign.

She claimed that when she first met with Marciano for a Guess Lingerie campaign, he ‘forcibly grabbed my breasts and started feeling them – playing with them actually. After I pushed him away, he said: ‘I’m making sure they’re real.’

She shared: ‘At one point he forcibly grabbed the back of my head so that I could not move and started kissing my face and my neck.’

She says photographer Yu Tsai, who was on the shoot, has corroborated her story.

But according to a report in TMZ last week Tsai has gone radio silent over the claims.

They report that Tsai hasn’t returned multiple phone calls and emails asking him to talk to investigators for Guess.

Upton, who went on to become extremely successful because of her Sports Illustrated cover, said she got through the ordeal thanks to the support of family and friends.

The model married baseball star Justin Verlander in Tuscany this past November.

According to his website Tsai regularly shoots for fashion bibles Vogue and Harper’s Bazaar, has a long list of top advertising clients including Apple, Coca-Cola, and Emporio Armani and has shot some of the biggest names in modeling including Alessandra Ambrosio, Cindy Crawford, and Gigi Hadid.

He has also shot a host of big name celebrities including Leonardo DiCaprio, Angelina Jolie, Nicole Kidman, Sarah Jessica Parker, Ewan McGregor, Jessica Chastain, and Serena Williams and has 365,000 followers on Instagram, while his French bulldog Soy’s own Instagram has 20,000 followers.