Photographs capture moment man finds out he will be a dad

A mother-to-be enlisted a photographer to capture the heartwarming moment her husband learned he was going to become a dad for the first time.

Chelsie Morales’ husband Will was under they impression that they had won a photo session with Kara Fishbaugh of Kara Quinn Photography when they headed to Zorinsky Lake in Omaha, Nebraska, on June 22 — but he was in for quite the surprise.

The heartwarming images from the shoot see Will’s mouth gaping open in surprise as Chelsie happily shared the news that he is going to be a dad.

Magical moment: Chelsie Morales planned a photo shoot to surprise her husband Will with the news that she is pregnant 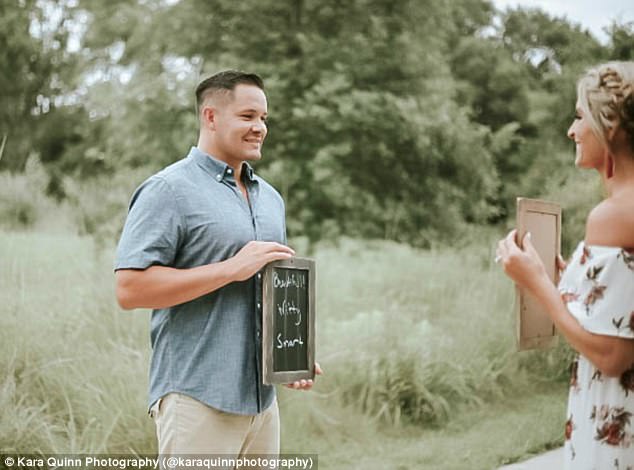 Sinking in: Kara Fishbaugh of Kara Quinn Photography captured the moment Will realized he is going to be a dad 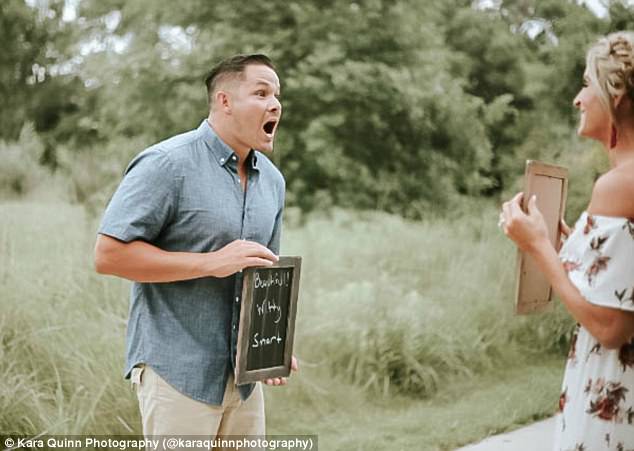 Say what? Images from the shoot see Will’s mouth gaping open in surprise the moment he learned that he is going to be a father 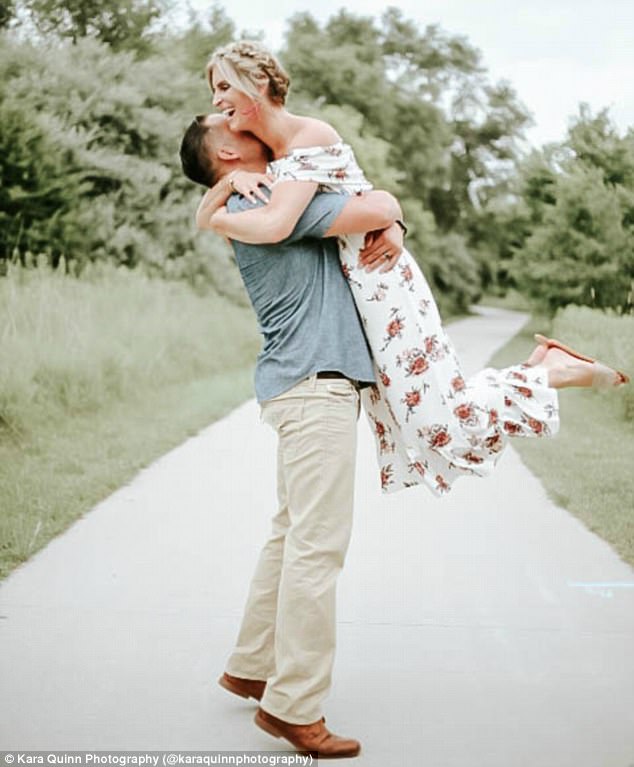 Overjoyed: Will  happily lifted his wife into the air after he learned the news

When posting some of the photos on her Instagram page, Kara explained that Chelsie had reached out to her after she learned she was pregnant with the hope of surprising Will with the news.

In order to pull off the surprise, Kara had them write three qualities they admire about each other on chalkboards at the start of the shoot

Images from the shoot see Will and Chelsie standing with their backs touching as they waited to turn around and show each other what they had written.

While Will wrote that his wife is ‘beautiful’, ‘witty’ and ‘smart’, he was  clearly stunned when he saw Chelsie holding a chalk a board that read: ‘You’re going to be a daddy.’ 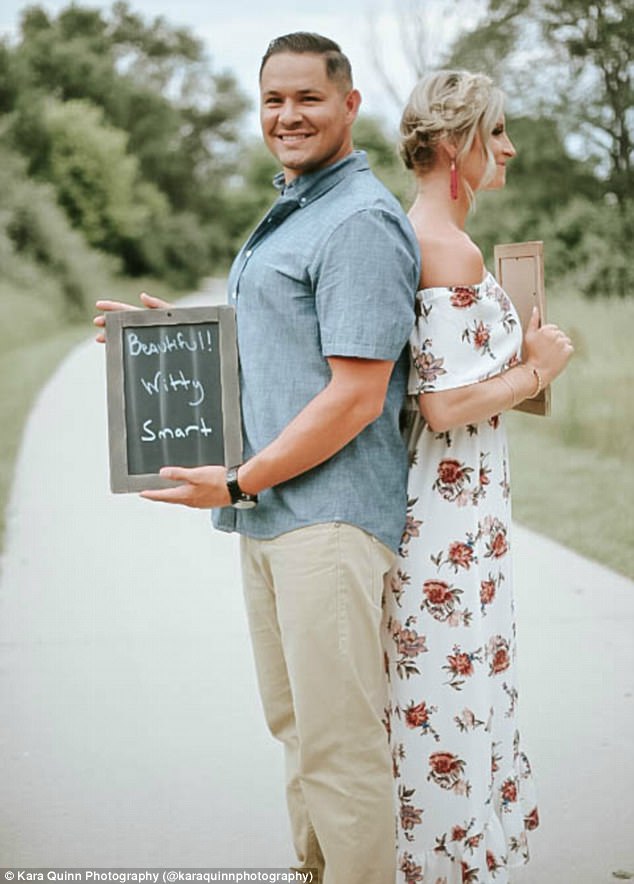 Clever idea: In order to pull off the surprise, Kara had them write three qualities they admire about each other on chalkboards 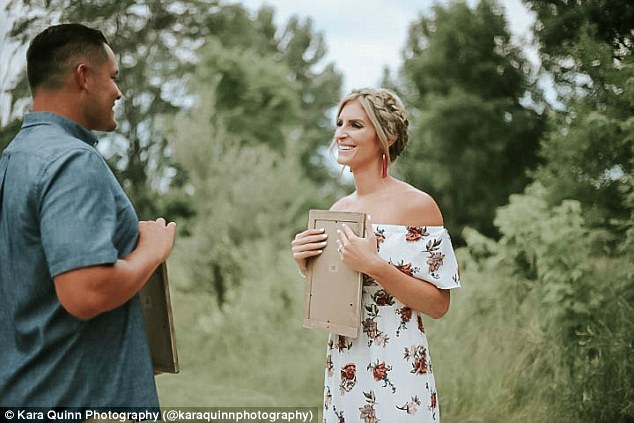 Look of love: Chelsie had a big smile on her face right before she showed Will her chalkboard, which read: ‘You’re going to be a daddy’ 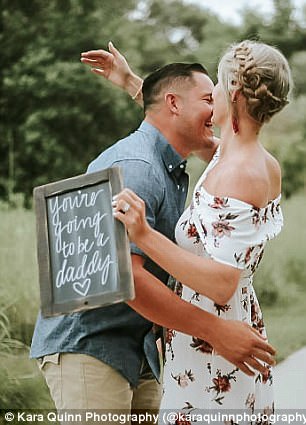 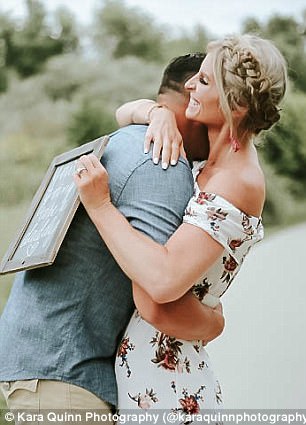 Happy as can be: After his initial shock passed, Will gave his wife a big hug 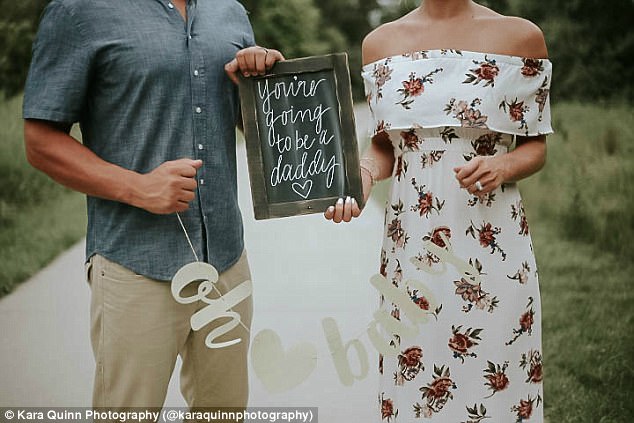 Oh baby: Chelsie said Will loves kids, so she knew he would be thrilled that they are now starting a family of their own 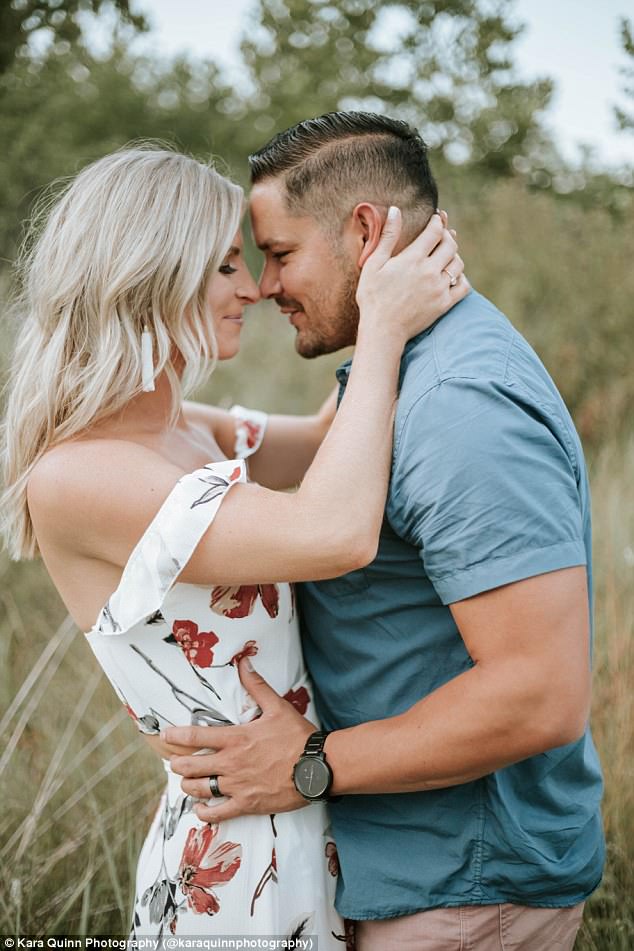 After the initial shock, Will grabbed his wife and gave her a big hug before lifting her up into the air.

‘If you ask anyone that knows him, he is just amazing with kids,’ Chelsie told the the HuffPost. ‘If there is a baby around, 100 percent guaranteed it will take him .01 seconds to find it and ask if he can hold it.

‘So I knew he would be more than thrilled once we were starting a family of our own.’

Chelsie, who who is due on February 23, found out she was pregnant four days before the shoot, and she had to patiently wait to tell her husband in order to pull off the unforgettable surprise. 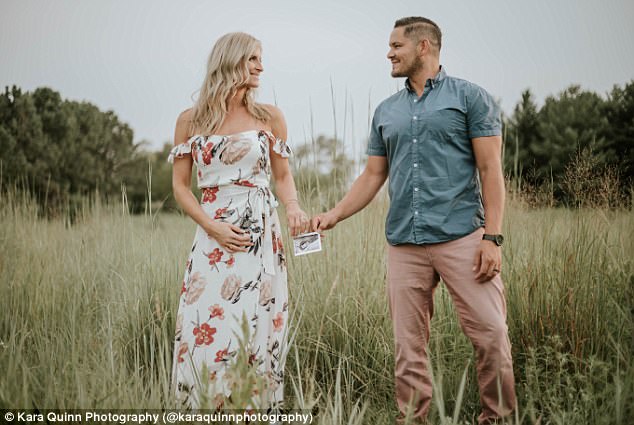 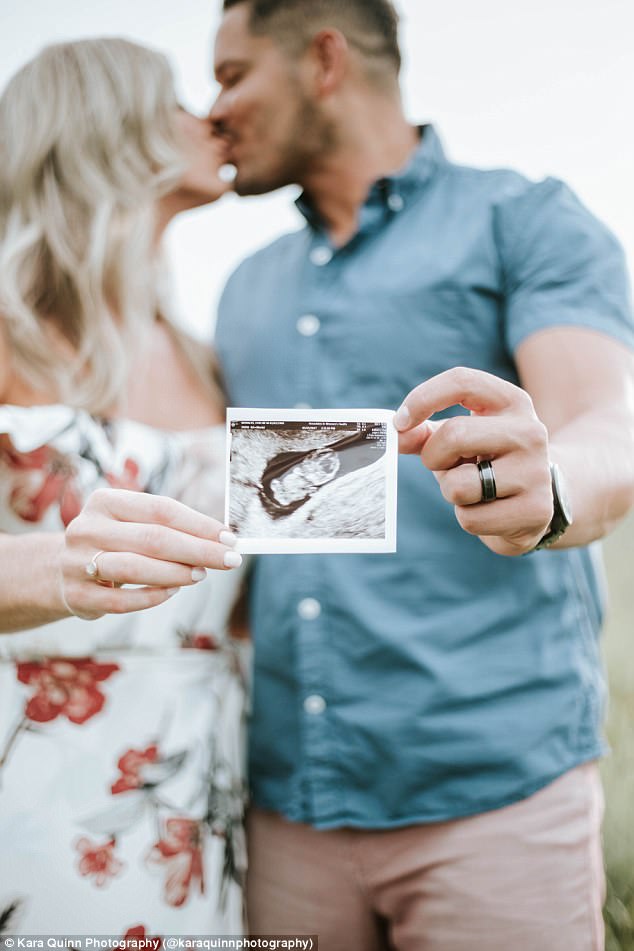 Baby on the way: Chelsie, who who is due on February 23, found out she was pregnant four days before the shoot 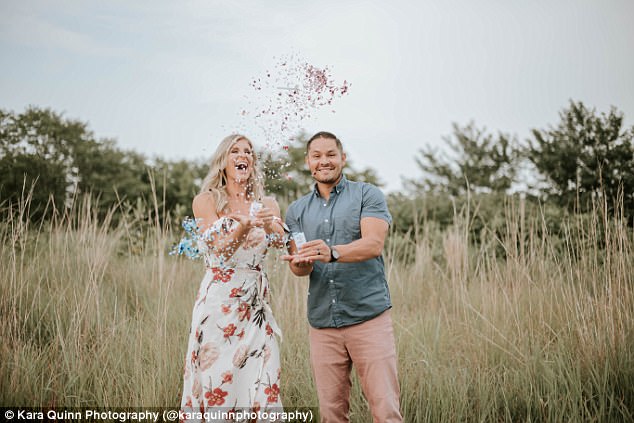 Party time: The couple also happily through confetti in a field as the celebrated together 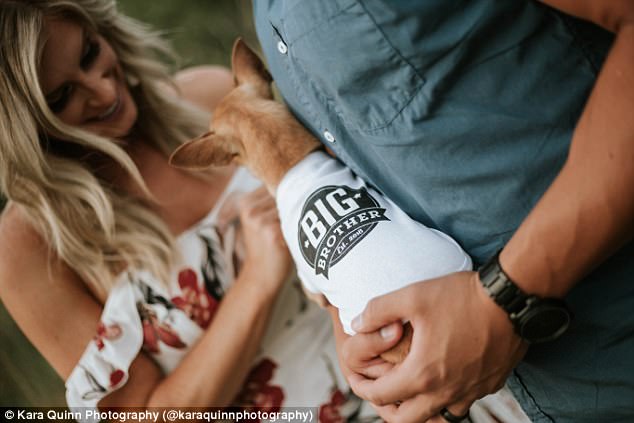 Growing family: Will and Chelsie’s Chihuahua was photographed as well 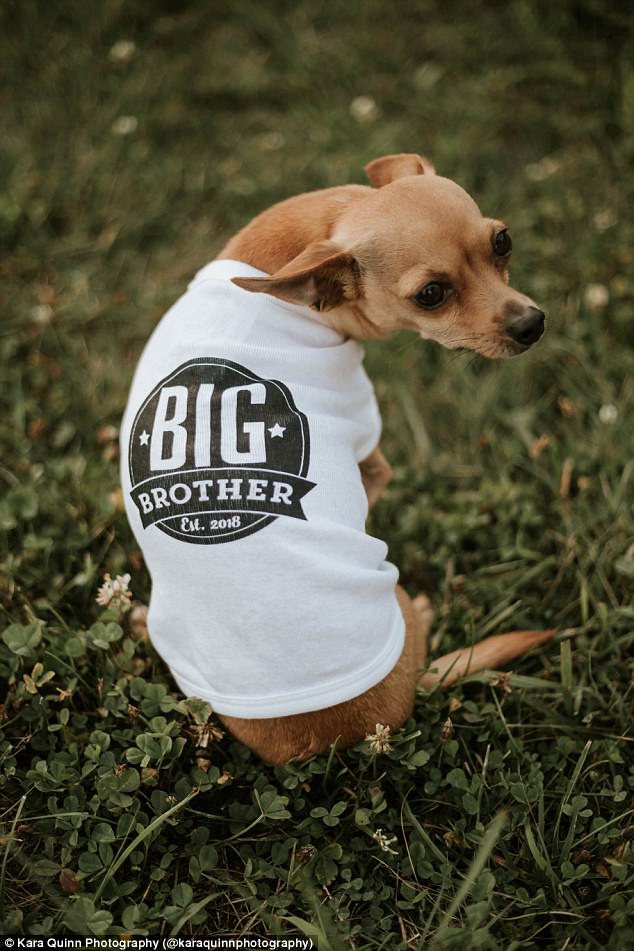 Too cute: The little pup was photographed wearing a T-shirt that reads: ‘Big brother Est. 2018’ 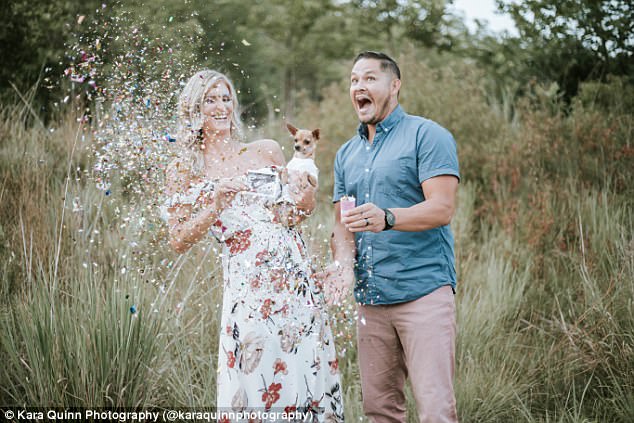 Surprise! After the shoot, the couple used the photos to share the news with their family

The mother-to-be told the outlet that Will ‘went from pure shock to being completely overjoyed with tears flowing’ — which undoubtedly made the wait well worth it.

Other images from the shoot see Chelsie and Will happily celebrating the news that she is expecting, and they made sure to bring their dog along as well.

In one photo, the little Chihuahua is seen wearing a T-shirt that reads: ‘Big brother Est. 2018’, and in another  Will is throwing confetti.

The couple also posed together while holding Chelsie’s first sonogram photo, and will is undoubtedly overjoyed by the news.

‘Not only will we have the photos to cherish forever and show our little babe someday, but we got to use them to tell our family the news as well,’ Chelsie told the HuffPost.