The Police Federation posted the pictures – some showing horrific facial injuries – online after brave male and female officers were attacked while on the job.

It comes after the Home Office published figures which suggest an officer is assaulted every 22 minutes after data showed there were 24,000 attacks last year.

One officer, Sergeant James Dowler, had his eye gouged and suffered a broken nose when he was set upon by a group after he tried to make an arrest in South Wales.

His left eye was left almost completely closed after the group surrounded him and started kicking him – including a woman who gouged at his eyes.

Speaking after the attack in 2015, he said: ‘As we were struggling on the ground four others got out of the car and surrounded me.

‘They were shouting and swearing, then started kicking and hitting me. The scariest part was that they threw my radio away so I had no idea if help was coming.’

Just last week PC Safia Finlow tweeted an image of her sitting in a hospital with her leg in plaster following an alleged assault in Torbay, Devon.

She was wearing her uniform in the image and wrote: ‘Vile assault and racial abuse on duty now have broken leg, upset children, postponed new role and cancelled course!’

Surrey Police officer PC Heather Caruana, 30, was unable to see out of one eye for five days and was left with a permanent scar after a young man attacked her. 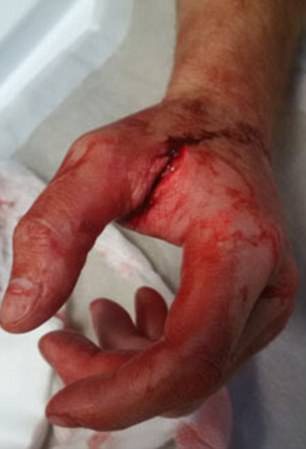 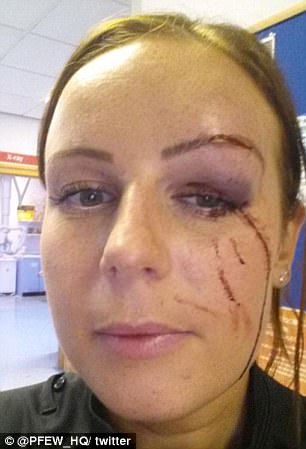 PC Heather Caruana, 30, (right) was unable to see out of one eye for five days after she was attacked by a man in Surrey. PC Ben Jeffries of Northamptonshire Police suffered a severe wound to his hand after being stabbed by a man who was self-harming (left)

The 18-year-old man head-butted PC Caruana above her left eye and she now feels let down by the courts after he was allowed to walk free.

Meanwhile, PC Ben Jeffries of Northamptonshire Police suffered a severe wound to his hand after being stabbed by a man who was self-harming.

And PC Karl Heath broke his collar bone when he attempted to arrest a man on his patch where he worked in West Yorkshire.

A woman claimed she was assaulted by her neighbour and PC Heath went to investigate but ended up being ‘slammed head first’ on to the ground by the man.

His collar bone needed a metal plate to repair the damage and his entire torso was bruised following the incident.

The offender was acquitted at court and PC Heath said: ‘For some reason, the jury didn’t think that we had proven beyond reasonable doubt that he had committed the crime. 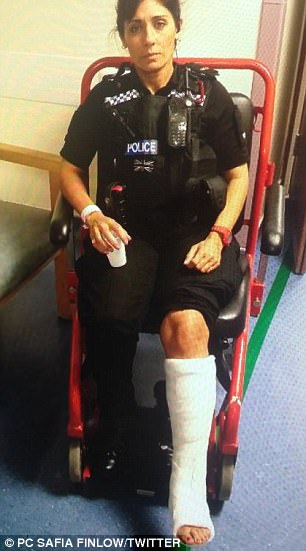 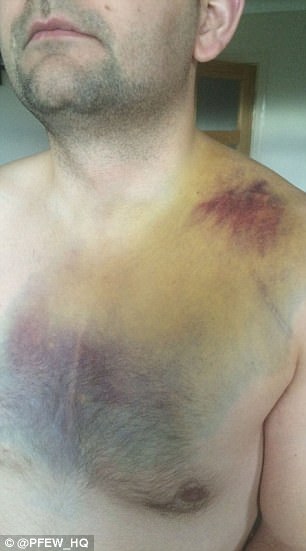 PC Safia Finlow tweeted an image of her sitting in a hospital with her leg in plaster following an alleged assault in Devon (left). Meanwhile, PC Karl Heath broke his collar bone in West Yorkshire (right)

‘Body worn video would have gone some considerable way to prove exactly what happened that day.’

It comes as Rhondda MP Chris Bryant’s Private Members’ Bill had its second reading on Friday.

The Bill seeks to make it an aggravated offence to assault an emergency service worker in the UK.

Labour MP and former firefighter, Bill Grant, said: ‘I’ve first-hand experience of people getting aggressive or throwing stones, but even if I hadn’t I would identify with this because they are serving the public 24-7 and should be treated with respect by society.’

Mr Bryant said: ‘Ministers have been telling me privately and they seem to be saying publicly that they are going to support the Bill, and if that is the case we should have a really strong united front on Friday morning.

‘I really hope that this will become law by next summer because an attack on the police or any of our emergency workers is an attack on all of us.’