Photos of Langside Cafe in Glasgow Southside unchanged in 50 years

Incredible pictures show how a Glaswegian cafe hasn’t changed a bit in 50 years.

The Langside Cafe opened its doors in 1920 but was taken over by an Italian family after they moved to Scotland in the 1960s.

Americo Rosso and his family served the residents of Southside for years before his daughter Sofia and her partner Domenic took it over.

Last year they decided to retire and when local buyer Isabell Graham took on the historic eatery, she vowed to keep everything just as it was when Americo was behind the counter.

From the menu, to the tables and the ice cream machine that is still going decades on, Isabell is determined to continue the Langside legacy. 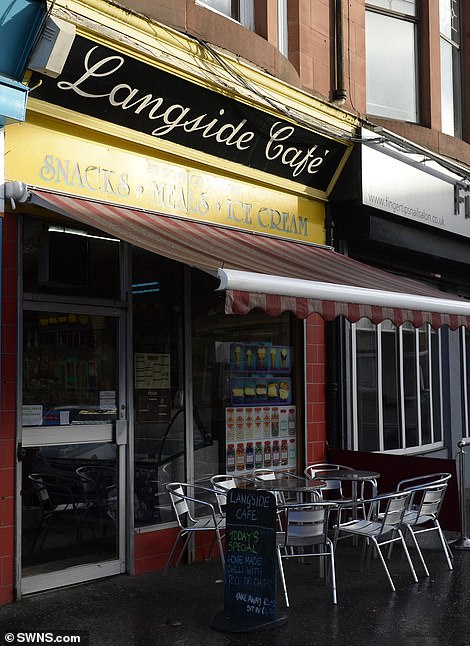 Frozen in time: The Langside Cafe in Glasgow’s Southside hasn’t changed a bit since it was taken over by an Italian family in the 1960s. The family decided to sell up last year handing it to Glasgow local Isabell Graham who wants to keep it as it is 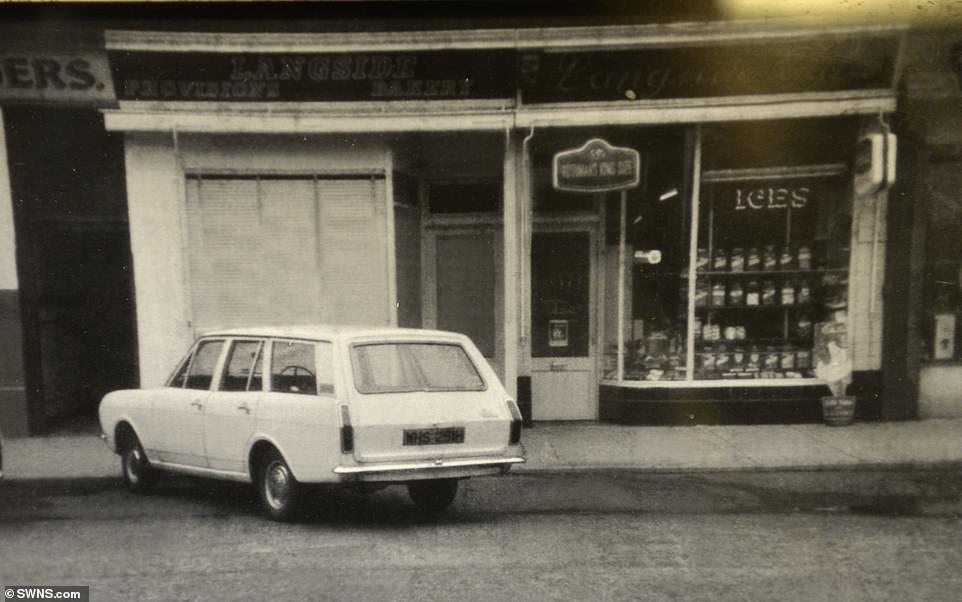 Nostalgic: The Langside Cafe is pictured in the 1960s when it was taken over by Americo Rosso and his family after they moved to Scotland from Italy. It prided itself on its ice creams, sweets and slap-up meals 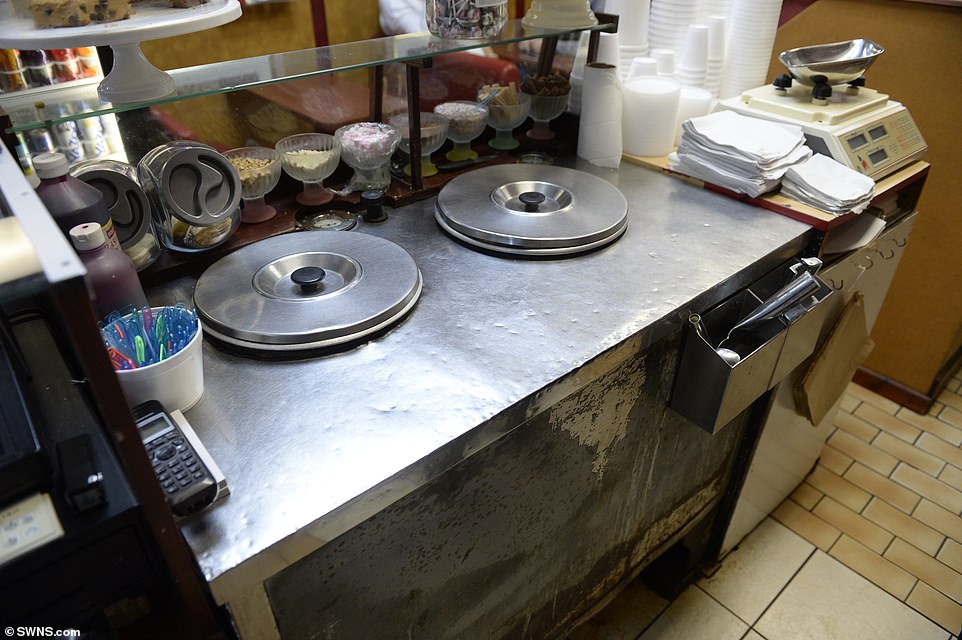 Customers at the Langside Cafe still get their ice cream from the same machine as they did 50 years ago (pictured). According to owner Isabell Graham it takes 20 minutes to make it work, but it’s worth the wait

She said: ‘People come in and tell me stories about the owner from 1968. We’ve got lots of customers who have come in since childhood, and now their children and grandchildren visit.

‘It is an institution in the community. The ice cream machine is 50 years old, it takes about 20 minutes.

‘The former owner, Sofia, grew up in this cafe – there are pictures on the wall of her as a baby.

‘Her father came over from Italy and couldn’t speak English, so you can imagine how important the cafe is to her.

‘I was a wee bit nervous being the new owner, but everything has settled down. The majority of the customers we know by name.’ 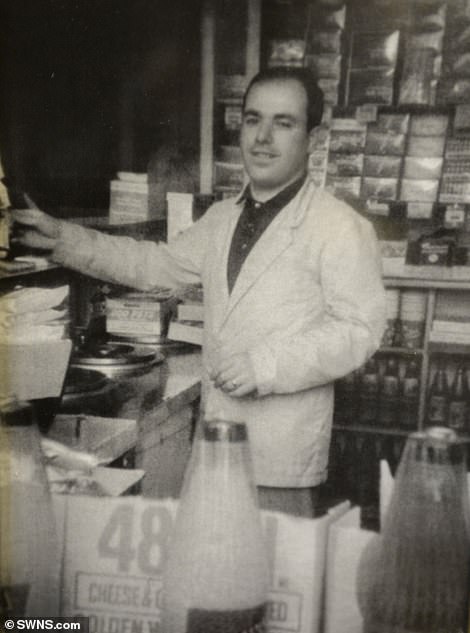 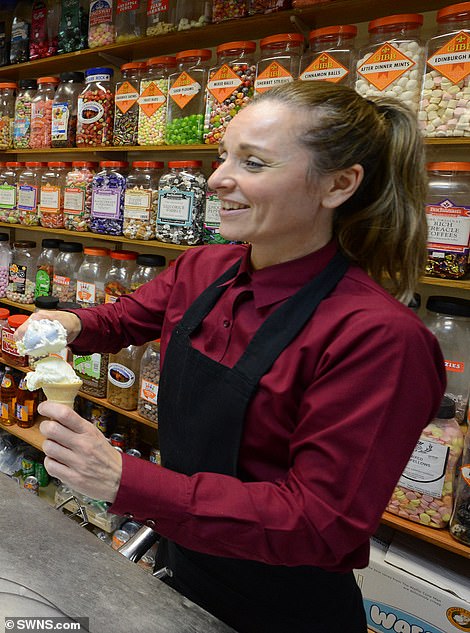 Then and now: Shop owner Americo Rosso is pictured (left) behind the counter at Langside Cafe in the 1960s. Today, it is Isabell Graham (right) who serves the ice cream, using the same machine as before – except it takes 20 minutes to get going 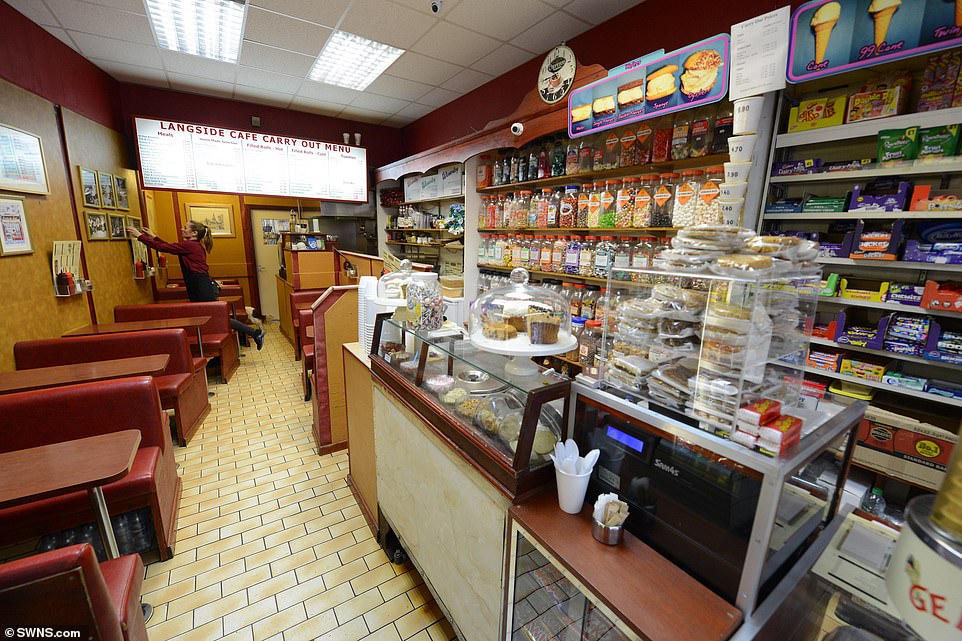 Today it is run by Glasgow local Isabell Graham, who bought the retro cafe from Rosso’s daughter Sofia Demarco and her partner Domenic in 2017 after keeping it in the family for 50 years. She has kept nearly everything the same inside (pictured) 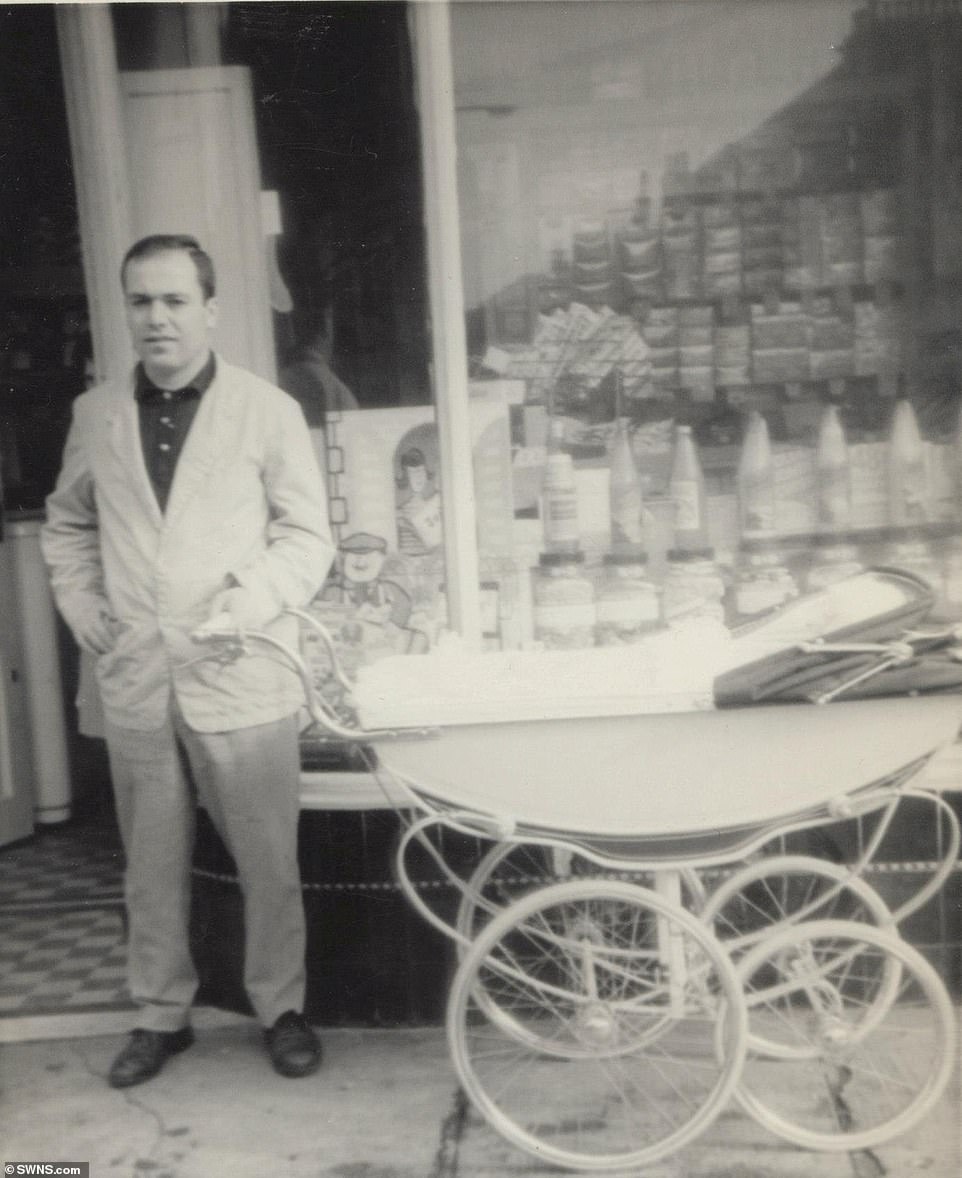 Italian immigrant Americo Rosso poses proudly outside his Langside Cafe in Glasgow’s Southside in 1963 after moving to Scotland with his family. He is pictured with his daughter Sofia’s pram, who went on to run the cafe after he retired 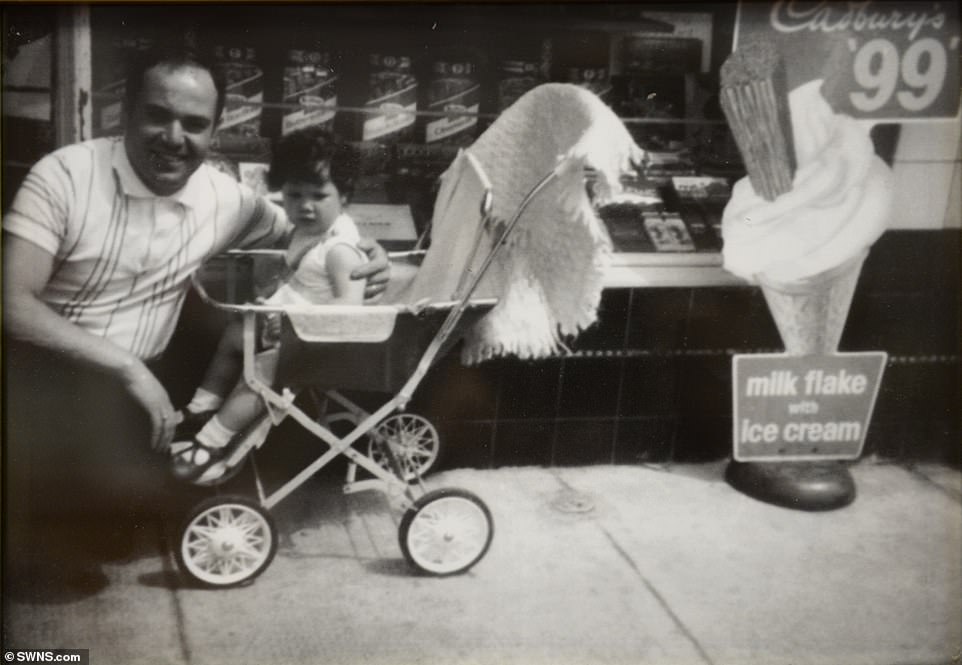 Two generations of Langside: Americo and Sofia are pictured outside the family cafe in the 1960s after he took it over 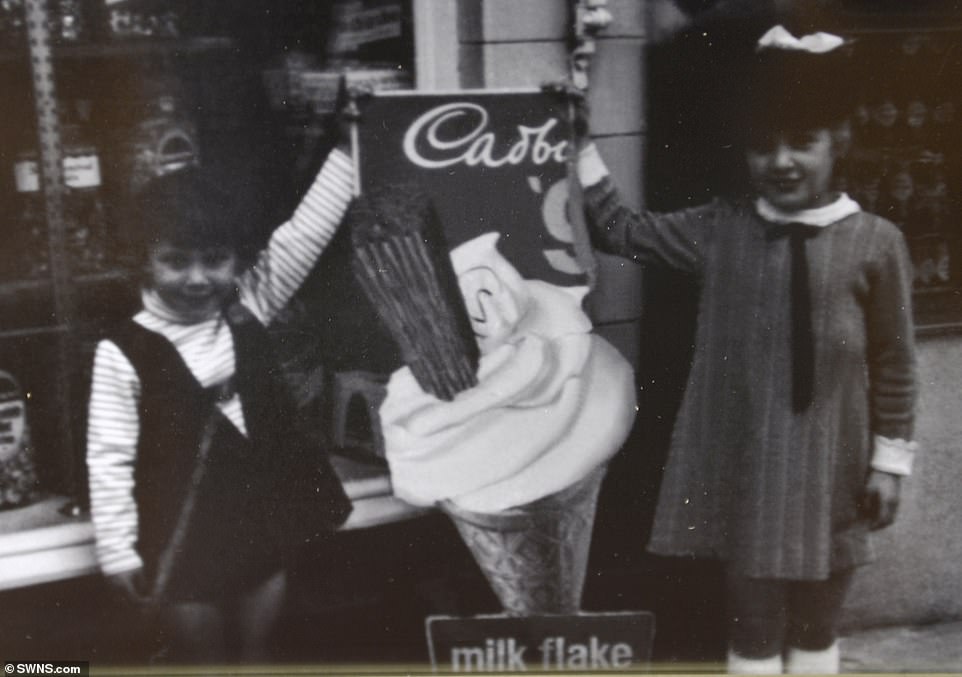 We all scream for ice cream! Sisters Sofia and Salvana Rosso are pictured clutching the ice cream sign outside their father’s cafe in Southside, Glasgow. Sofia and her partner Domenic put the shop up for sale in 2017 when they retired

The vinyl booths and vintage ice cream machine are just as they were all those years ago and the food offering is much of the same – fish and chips, macaroni and cheese and a wall lined with sweet treats in jars.

On the walls you can see pictures of the previous owners. Americo is seen with his daughter in a pram, in 1963 in one black-and-white photograph.

Langside doesn’t accept cards but has modernised just slightly with a website and Facebook page to promote the cafe.

Dogs are welcome and even sit in the vinyl booths happily eating homemade ice creams cones with their owners. 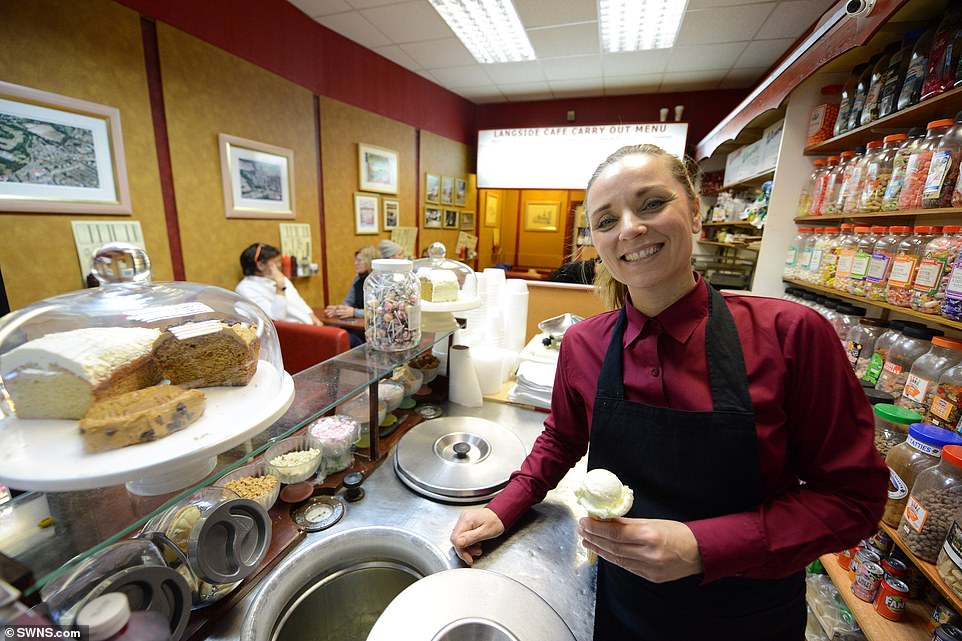 New owner Isabell Graham (pictured) took it over determined to keep the atmosphere the same as it was when her regular customers, many of whom are elderly, courted their spouses there or bought sweets from the counter as children 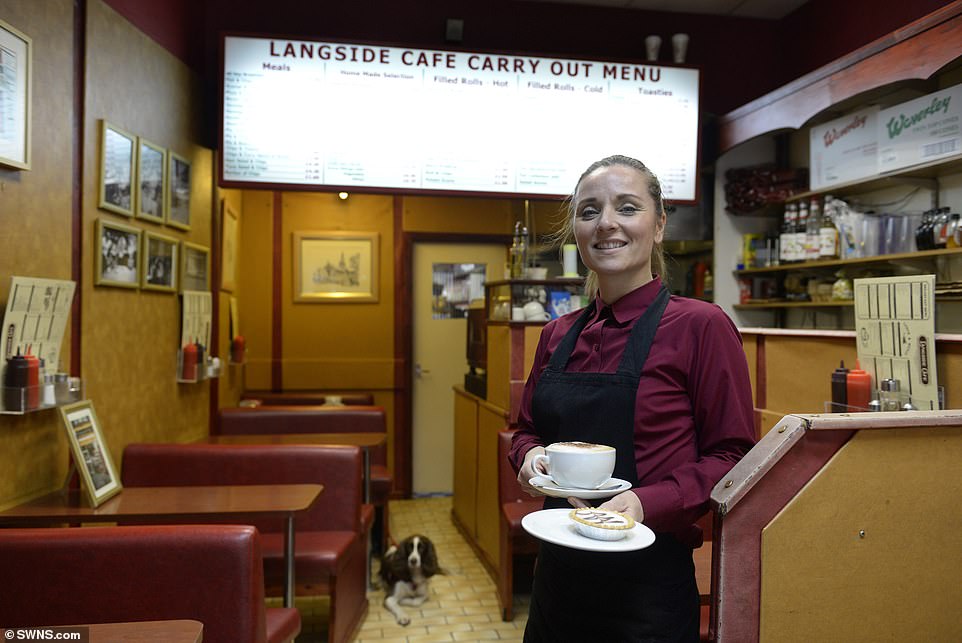 Isabell (pictured waiting tables at the Langside Cafe) had never been to the retro eatery before she decided to buy it, despite living locally. She says she is determined to uphold the previous owners’ legacy and keep things just how they were

Although she grew up in Southside, Isabell had never visited the cafe until she decided to buy it – and is joined each morning by her Springer Spaniel, Poppy.

Isabell added: ‘I think it was the heritage and the history that it stood for which attracted me.

‘It is 98 years old, and nothing much has changed. It has just got such a nice feel about it.

‘It is very retro – it is like a step back in time. There are places which open up of every style in Glasgow, but to have a piece of history is completely different.

‘You can’t just open it tomorrow. The glass jars used to be in the window, but we moved them inside as some of the sweets were going soft in the sun.’ 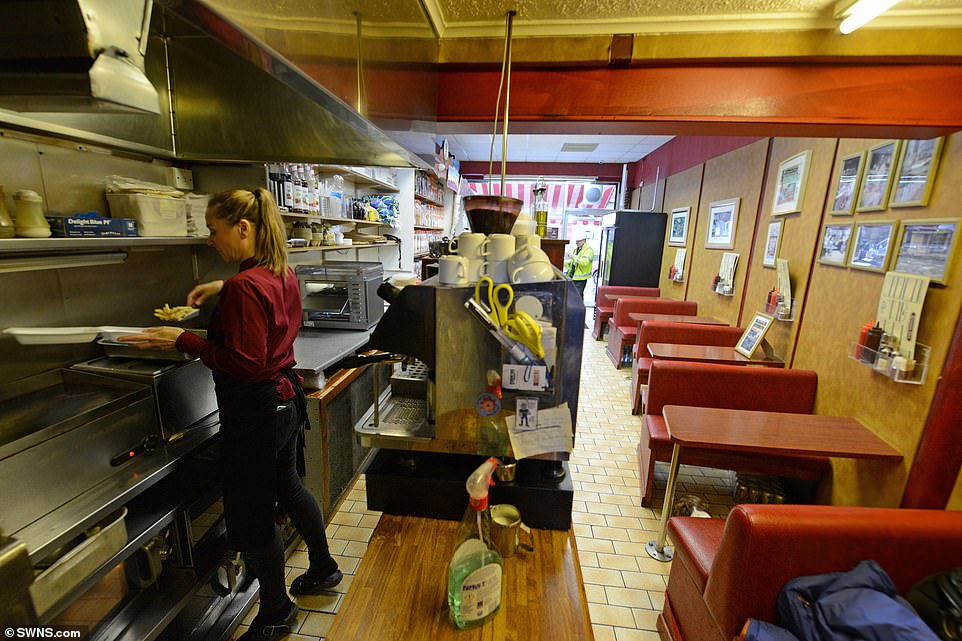 The kitchen (pictured, foreground), tables, and exterior have all been kept as they were in the 1960s to keep the original spirit of the cafe alive. Customers, their parents and their grandparents have been eating there for decades 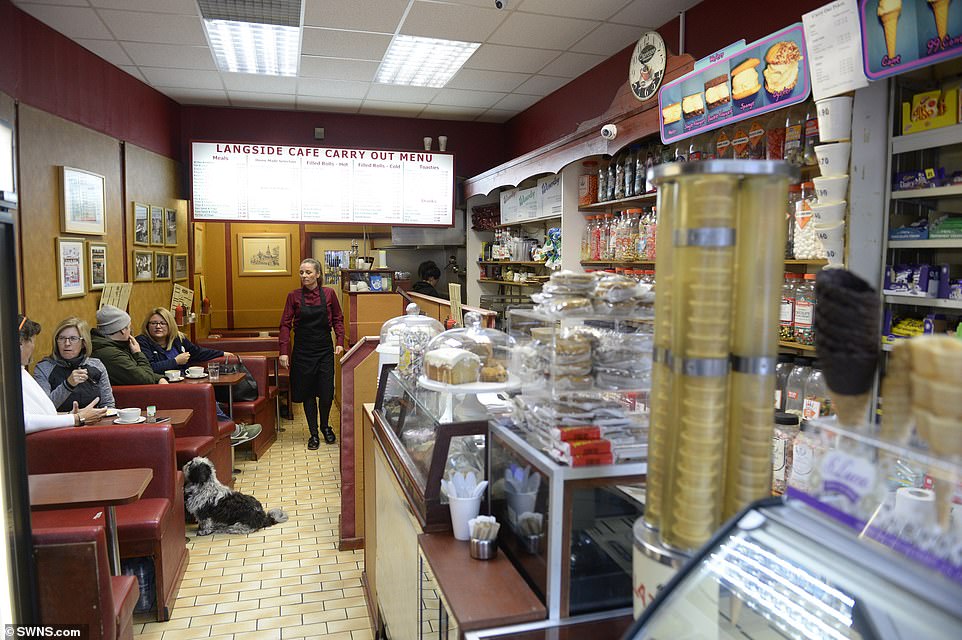 Isabell (pictured waiting tables inside the cafe) said: ‘People come in and tell me stories about the owner from 1968. We’ve got lots of customers who have come in since childhood, and now their children and grandchildren visit.’ 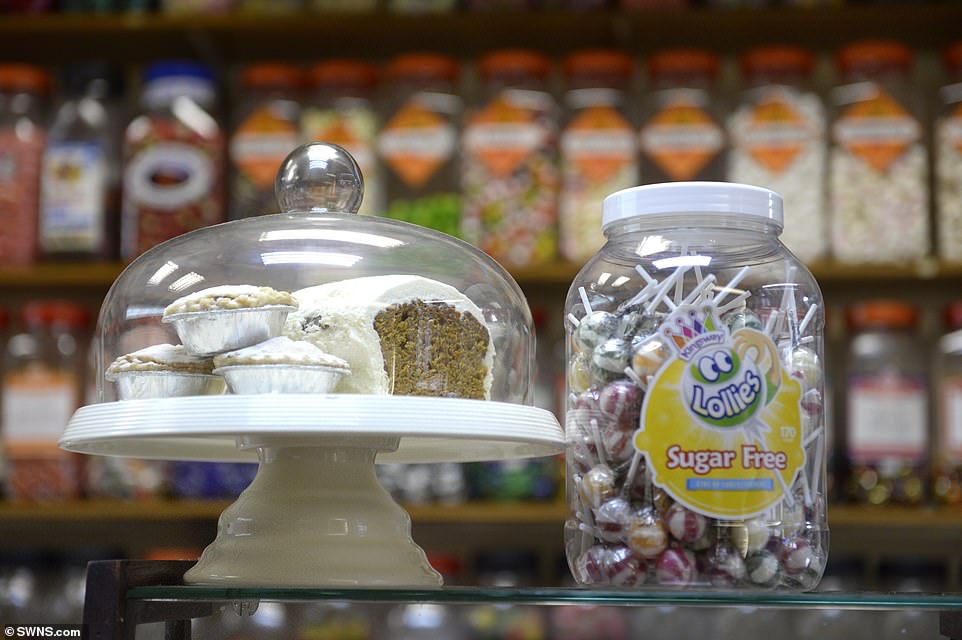 Jars of sweets line the walls of the Langside Cafe, where cakes, chips, ice cream and meals like macaroni cheese, fish and chips and curry and rice are all a hit on the menu, Pictured: The display counter inside