Photos of Muslim who taught Queen Victoria about Islam

A descendant of one of Queen Victoria’s most trusted confidants has told how his great-great-grandfather introduced the monarch to Indian culture.

Abdul Karim was handpicked to help Queen Victoria learn about her Indian territories in the late 19th century.

He served as her Royal servant for 15 years and their extraordinary friendship is the subject of a new movie, Victoria and Abdul, starring Dame Judi Dench as the lonely queen.

The British-American film portrays Victoria first meeting 24-year-old Abdul in 1887, when he presents her with a commemorative coin at a Golden Jubilee banquet when she is 60.

Nabeel Syed, 36, from Leicester is the great-great grandson of Abdul Karim 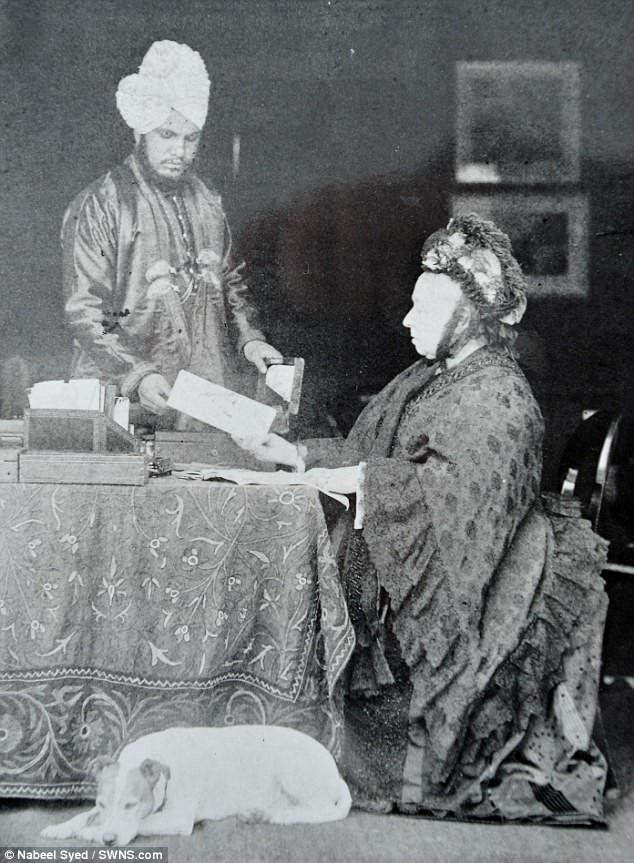 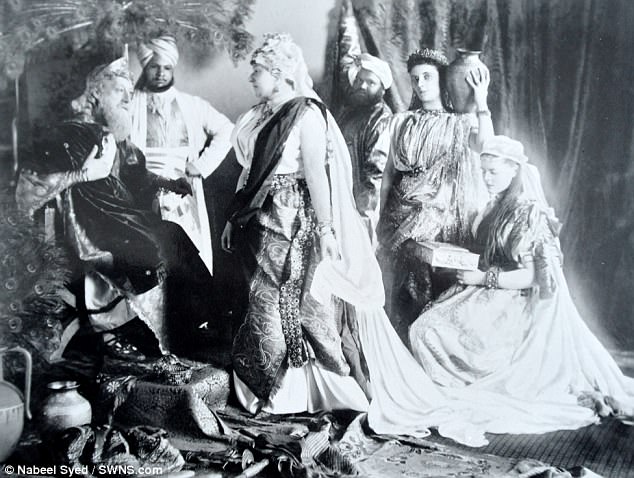 Born in 1863, Abdul Karim was one of two Indians selected to become a servant to the Queen in 1887 – the Queen’s Golden Jubilee year.

He was given the title of Munshi, which means clerk and teacher, by the Queen and later appointed Indian Secretary.

After Queen Victoria died on January 22, 1901, her successor, Edward VII, ordered that all the letters between Abdul and his mother be destroyed.

However, he did allow Abdul to be the last to view Victoria’s body before her casket was closed, and to be part of her funeral procession.

Abdul returned to India to live on the land near Agra that the Queen had granted him, but he died childless in 1909, aged just 46.

Despite their 36-year age gap the movie shows her becoming increasingly besotted with Abdul, who has been sent over as her ‘gift’.

Hundreds of letters sent to Abdul by Victoria, many signed ‘Your dearest friend’ were destroyed after her death in 1901.

His great-great-grandson Nabeel Syed, 36, inherited a remarkable collection of black-and-white photographs of Abdul and Queen Victoria after researching his family tree.

The financial advisor from Leicester, said: ‘I only really learned much about Abdul Karim in the past two or three years.

‘I’m honoured to have that connection because Queen Victoria left such a legacy and is one of our most famous monarchs.

‘He helped the Queen understand Indian culture, he taught her Urdu and introduced her to Indian curry and fruit and other foods.

‘Despite their age gap, their relationship was very close and it is suggested there may have been a romantic connection but we don’t know for sure. 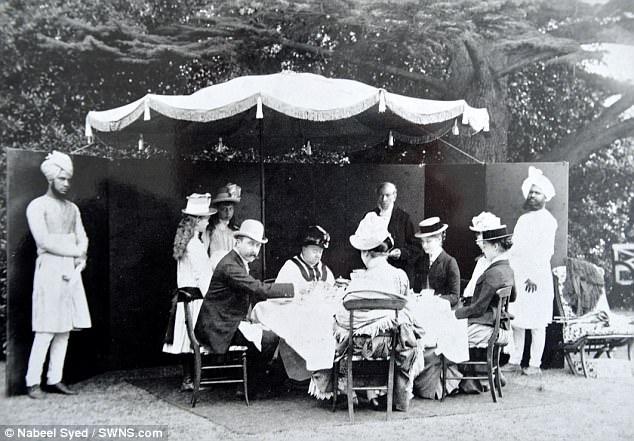 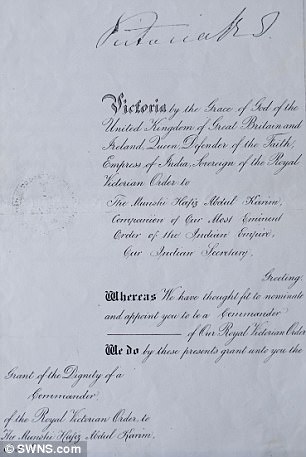 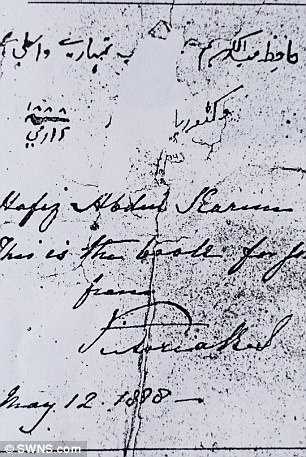 Left, A letter appointing Abdul Karim a Commander and right, A letter written in Urdu by Queen Victoria 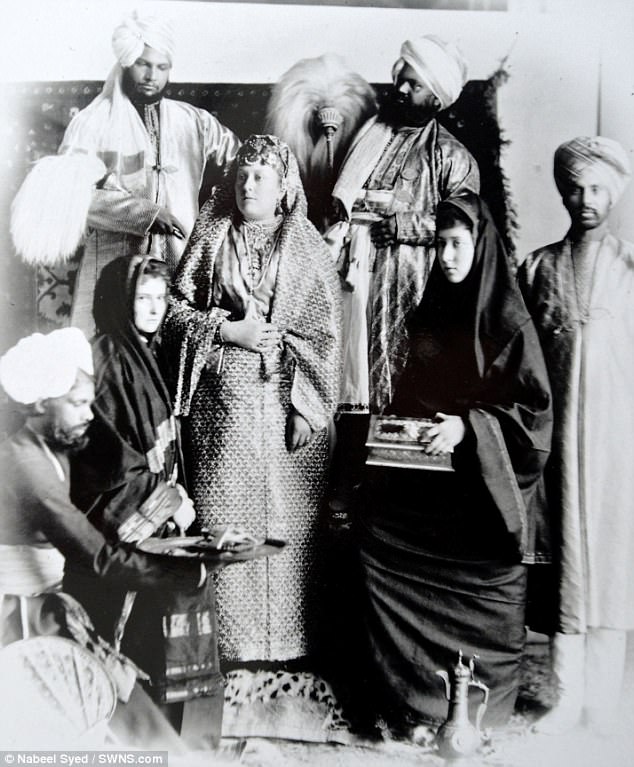 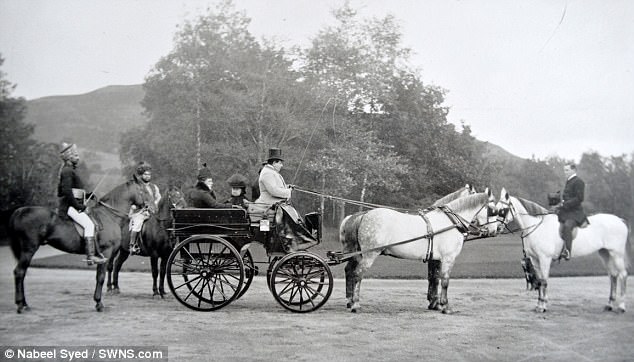 ‘He was teaching her about the culture and educated her in respect of the Koran and things like that, as well.

‘He was a teacher, he obviously went there as a servant to start off with but they got very close and Queen Victoria trusted him.

‘He taught her more about the Indian culture, the etiquette behind everything, started teaching her about the language Urdu.

‘She actually wrote him a little letter in Urdu and wrote in English underneath.

‘That was passed to him. I understand he was also teaching the Queen the Koran as well.

‘At the time not all the establishment were too happy about it, from what I’ve read, but among other things that’s what he was doing and helping the Queen.

‘He was actually made Commander of the Royal Victorian Order, to ‘Munshi Hafiz Abdul Karim.” 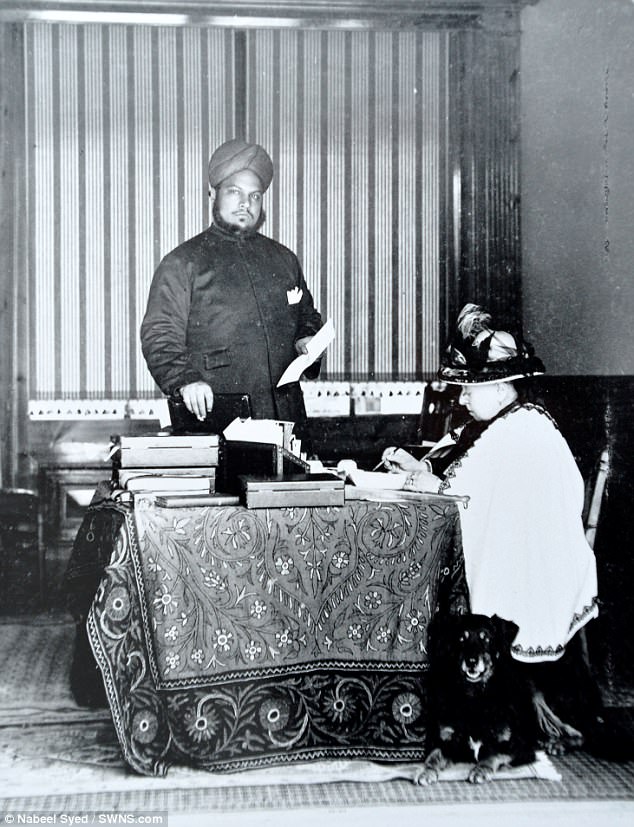 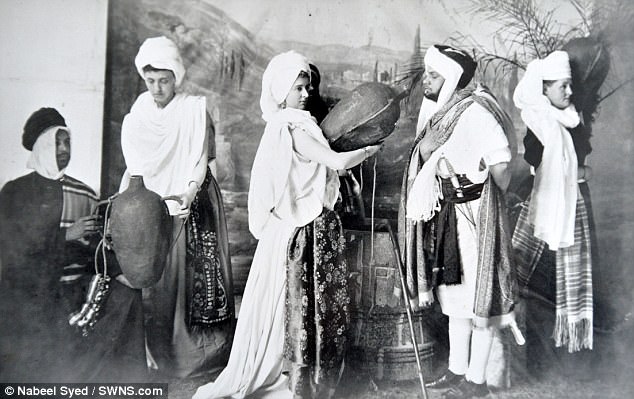 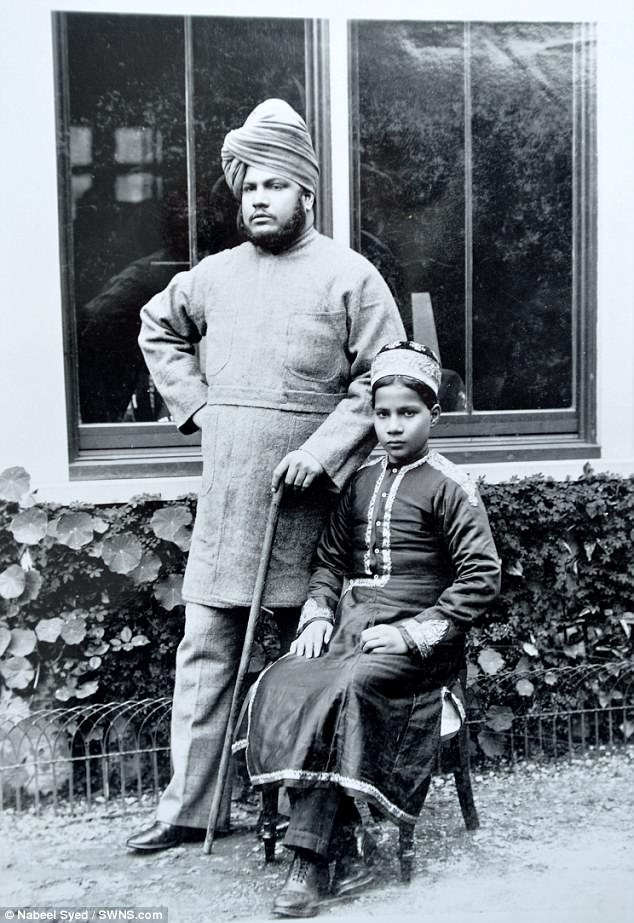 Abdul Karim with his nephew Mohammed Abdul Raschid, pictured together in 1897 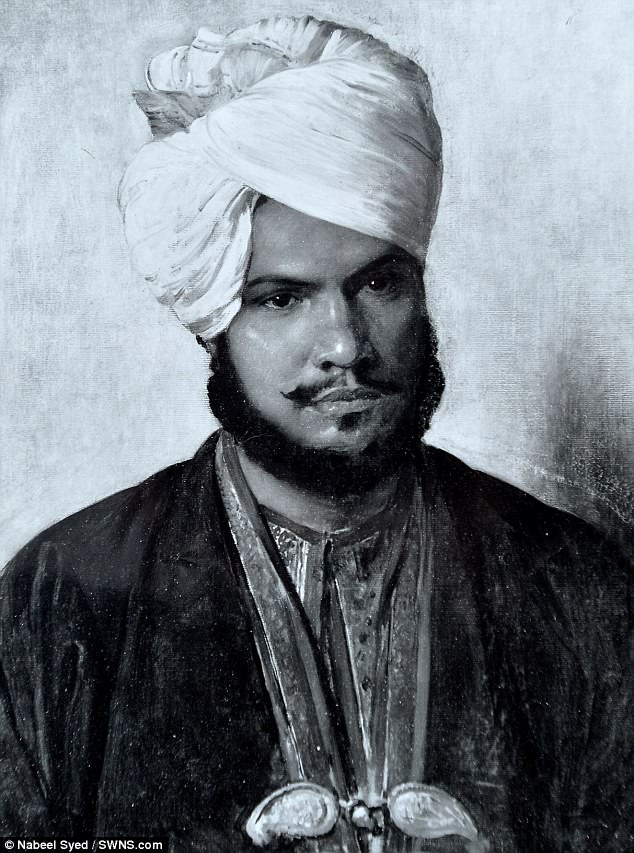 Nabeel’s parents Sultana and Ijaz Syed, who live in Nottingham, travelled to Windsor Castle several years ago to view the collection of photographs of Abdul with Victoria.

Nabeel said: ‘There are pictures of Queen Victoria and Abdul Karim dressed up in very elaborate clothes and also the Queen signing documents while Abdul Karim stands at her side.

‘I’m told that after they became good friends, the Queen ordered that all the pictures that showed him serving tea, and things like that, be destroyed.’

Nabeel is going to view the movie, which comes out in UK cinemas on Friday, September 15. 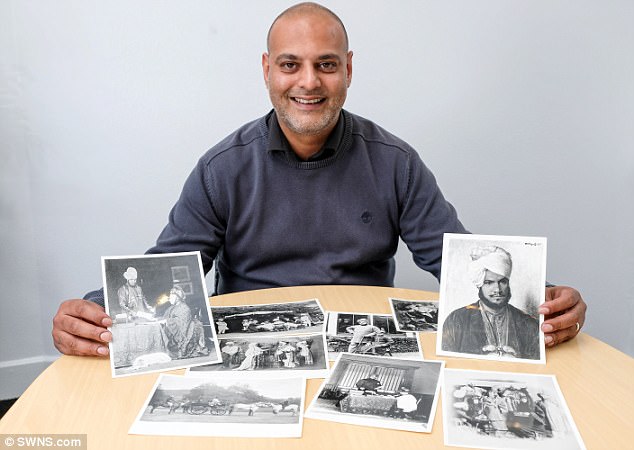 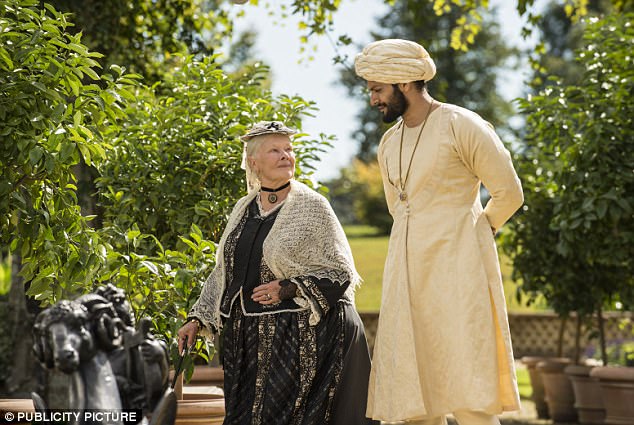 Dame Judi Dench as the lonely queen and Ali Fazal in the movie, Victoria and Abdul 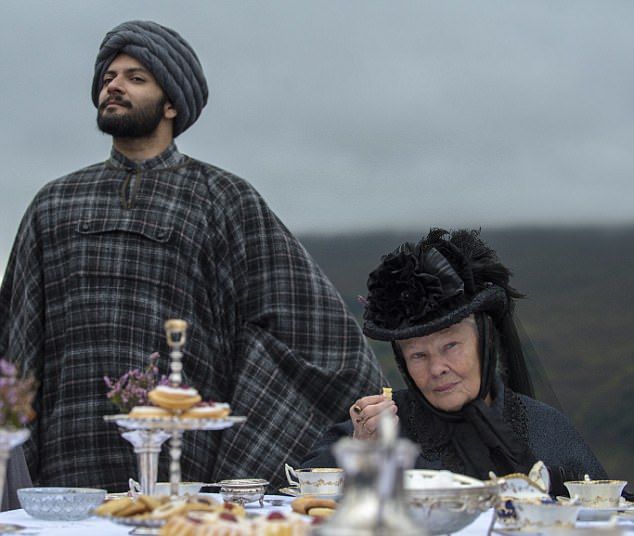 The British-American film portrays Victoria first meeting 24-year-old Abdul in 1887, when he presents her with a commemorative coin at a Golden Jubilee banquet when she is 60

He said: ‘I’m definitely looking forward to watching the film.

‘When I saw the trailer online I shared it on Facebook and let everyone know that was my great-great-granddad so that got quite a lot of attention, which was nice.

‘It would have been nice to get tickets to the premiere but I don’t think that will happen so we will go down in our own time and watch it – but I am definitely looking forward to it.’