Photos of a couple delivering dolls to patients with Alzheimer’s in nursing homes have reignited a debate into the effectiveness of doll therapy.

Sandy Cambron, 69, watched her mother-in-law Pearl deteriorate from Alzheimer’s disease and saw that one of the few things that comforted her in her final days was a baby doll.

The practice of using dolls to treat symptoms such as anxiety and agitation in patients with dementia has been the subject of controversy across care facilities for the past several years.

A viral Facebook post with photos of Cambron delivering dolls to patients at a nursing home in Louisville, Kentucky, has brought the yearslong debate back into the spotlight. 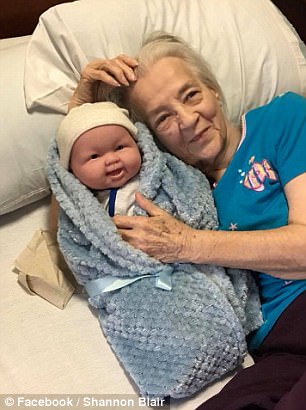 ‘Pearl’s Memory Babies’ is a project based in Louisville, Kentucky, that delivers baby dolls to patients with dementia and Alzheimer’s disease 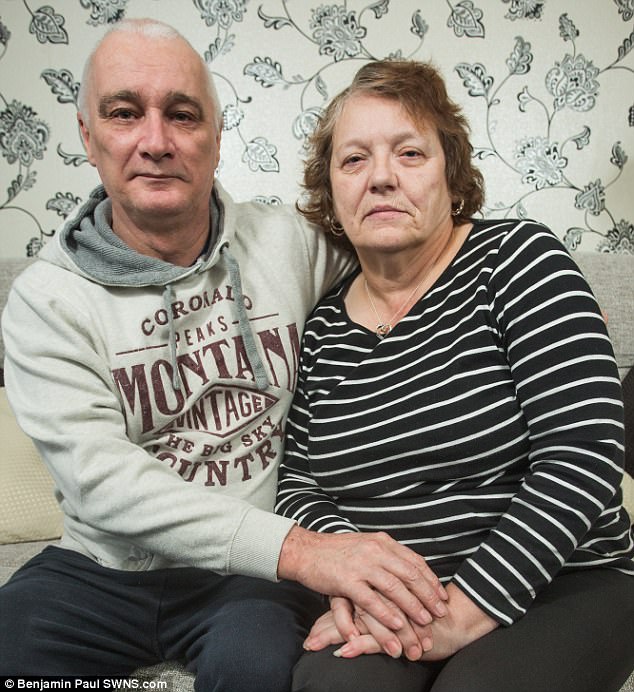 Sandy Cambron, 69, lost her mother-in-law Pearl to Alzheimer’s in 2008. For the past decade, she and her husband Wayne have delivered more than 200 dolls to homes in their community

Research on the doll therapy is limited, and one of the most comprehensive sources is a 2014 review of 11 studies by health organizations in the UK.

The review found that the use of dolls could be therapeutic for some people living with dementia by reporting increased levels of engagement, communication and reduction in episodes of distress.

Care providers that advocate for the practice say that it helps patients engage with something when they have trouble getting involved in activities.

‘Having the doll … offers them an anchor or a sense of attachment in a time of uncertainty,’ Gary Mitchell, author of a new book: Doll Therapy in Dementia Care: Evidence and Practice told NPR.

Critics, however, say that it’s better to engage patients with activities that require critical thinking, and that using dolls infantalizes the patients.

‘They are adults and we want to treat them like adults,’ says Stephanie Zeverino, a caretaker at a Los Angeles nursing home told NPR. ‘We want to provide a sense of dignity.’

For Cambron, the proof of the dolls’ effectiveness shows on the patients’ faces every time she stops by a nursing home with a delivery.

‘It makes me happy to see them, to know that I can’t make them well, but I could just try to comfort them,’ Cambron told People. 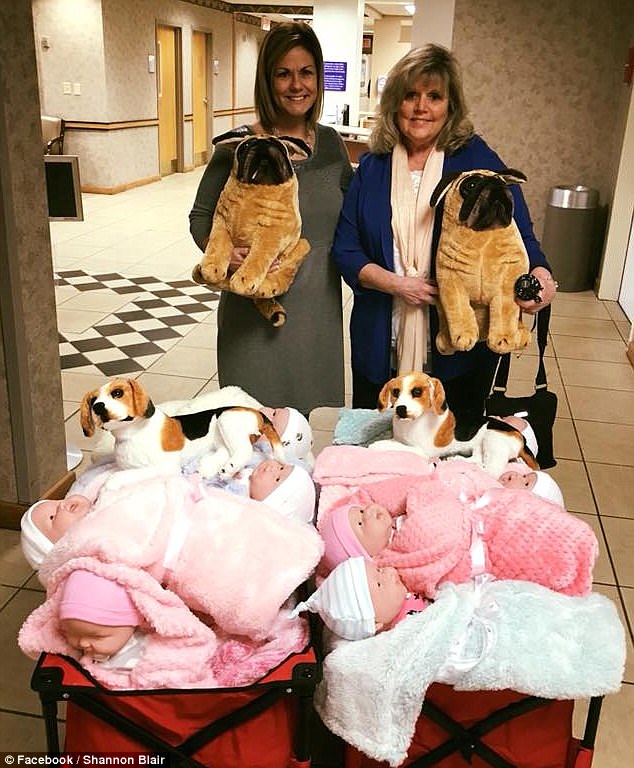 On Valentines Day ‘Pearl’s Memory Babies’ stopped by a home to deliver dolls to the women and stuffed animal puppies to the men. Photos of the event have gone viral on Facebook 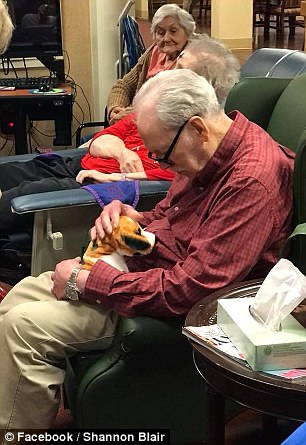 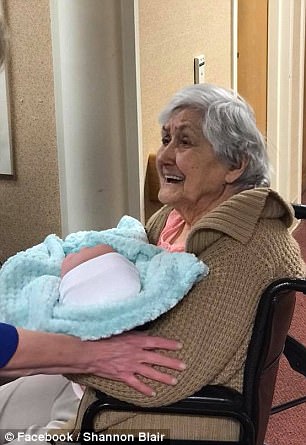 Left: One of the men at Park Terrace health campus pets his new stuffed animal puppy dog. Right: A woman looks up at Cambron with gratitude as she holds her baby doll

In the decade since Pearl died, Cambron and her husband Wayne have delivered more than 200 baby dolls to nursing homes all across the Louisville, Kentucky, area.

The GoFundMe page for ‘Pearl’s Memory Babies’ has raised almost $12,000.

‘We decided to do this in memory of [Pearl]. Her baby was her little buddy and her companion, it gave her lots of comfort,’ Cambron said. ‘We knew how much it meant to her and we realized what she was going through.

‘We saw the other Alzheimer’s patients and they just became so precious to us, we want to try to make their last days as pleasant as we can.’

On Valentines Day, the couple stopped by Park Terrace Health Campus with baby dolls for the women and stuffed animal puppies for the men.

Photos from the event were shared on Facebook and have gone viral. 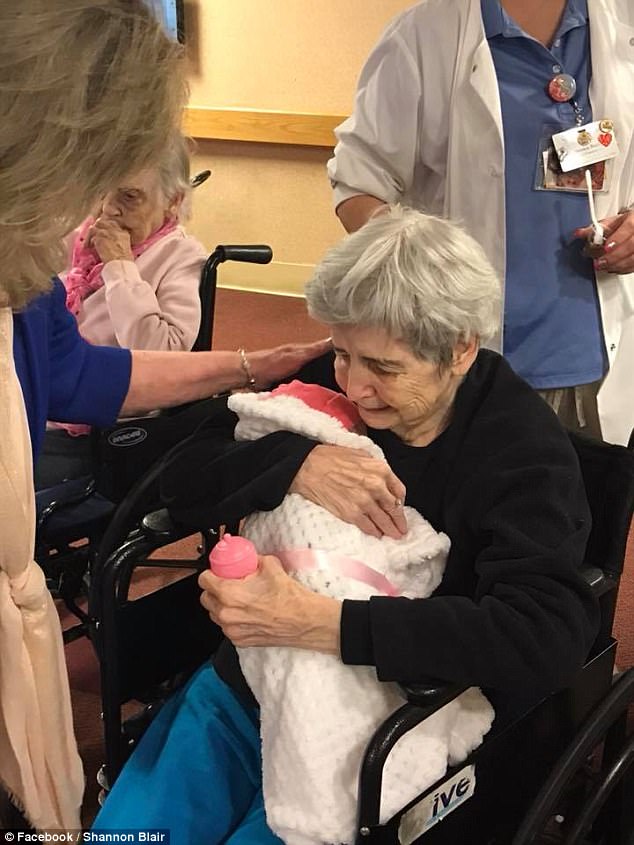 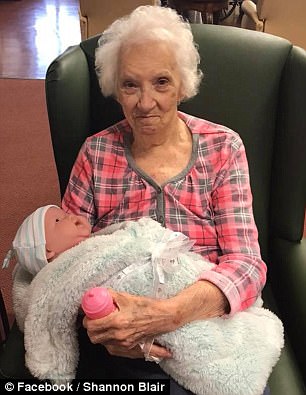 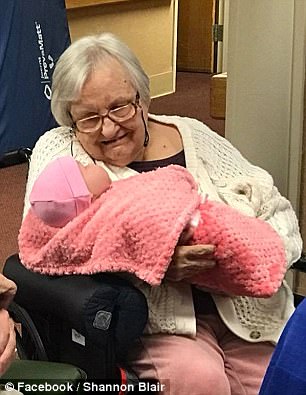 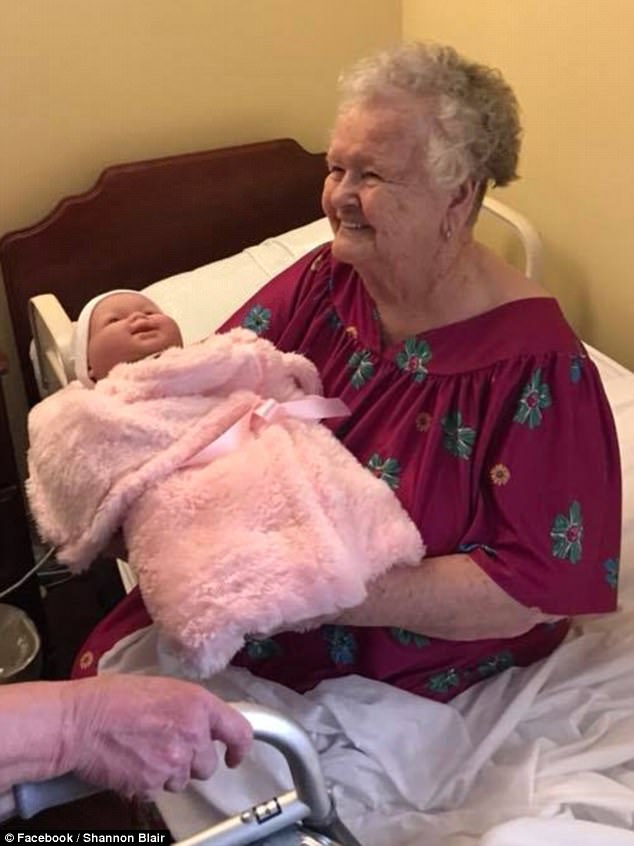 ‘By time we left the nursing home, there were several of them in a circle all in wheelchairs and you could tell they were having a little baby party, comparing each other’s babies,’ Cambron said.

‘It even gets some of them out of their rooms now. It’s just unbelievable.’

In the future, the couple hopes to deliver the gifts to places beyond just nursing homes. 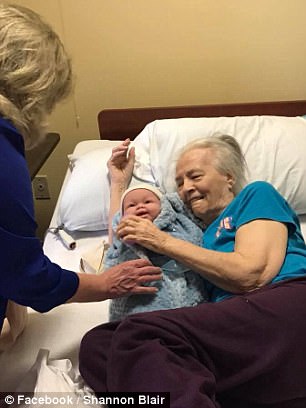 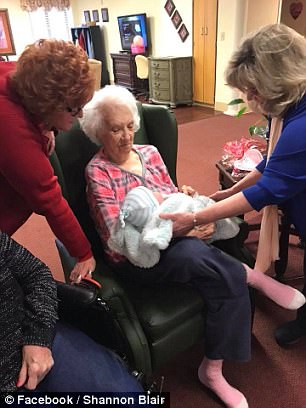 ‘It makes me happy to see them, to know that I can’t make them well, but I could just try to comfort them,’ Cambron said 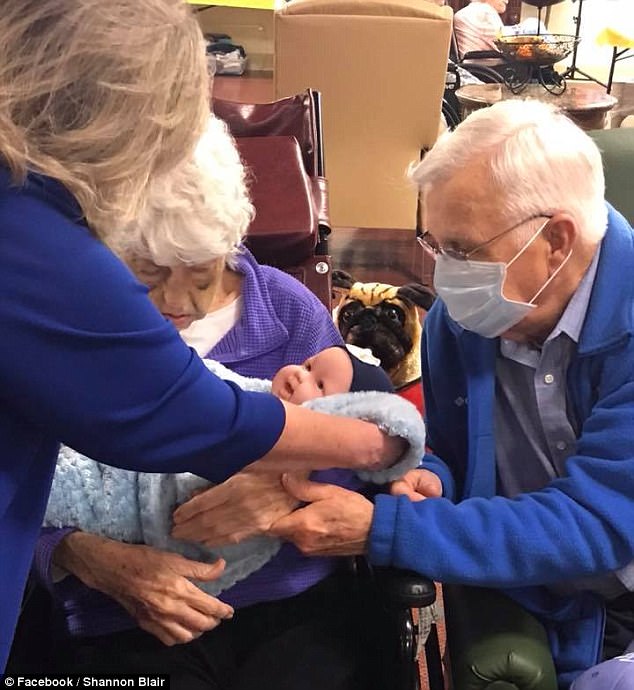 Cambron said that many of the men at Park Terrace Health Campus wanted to hold the babies as well, and some ended up leaving with a baby and a puppy 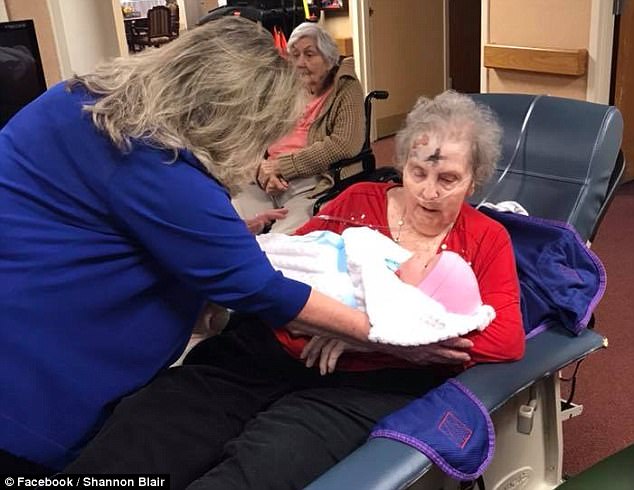 In the future, the couple hopes to deliver the gifts to places beyond just nursing homes