The streets of Bali that were once bustling with tourists are now empty as Indonesia struggles during the coronavirus pandemic.

Thousands of Bali residents have been left jobless after the Indonesian government declared a total state of emergency banning all non-citizens from entering the country.

Last year, more than one million Australians visited the island with many holidaying at hot spots like Kuta, Seminyak and Canggu.

But since no more tourists are flooding in, Bali has become a ghost town with tour guides, hotel workers and shop owners struggling to grapple with the hit to the economy.

The streets of Bali that were once bustling with tourists are now unrecognisable as Indonesia struggles to keep afloat amid the outbreak of the deadly coronavirus (pictured: empty street in Bali) 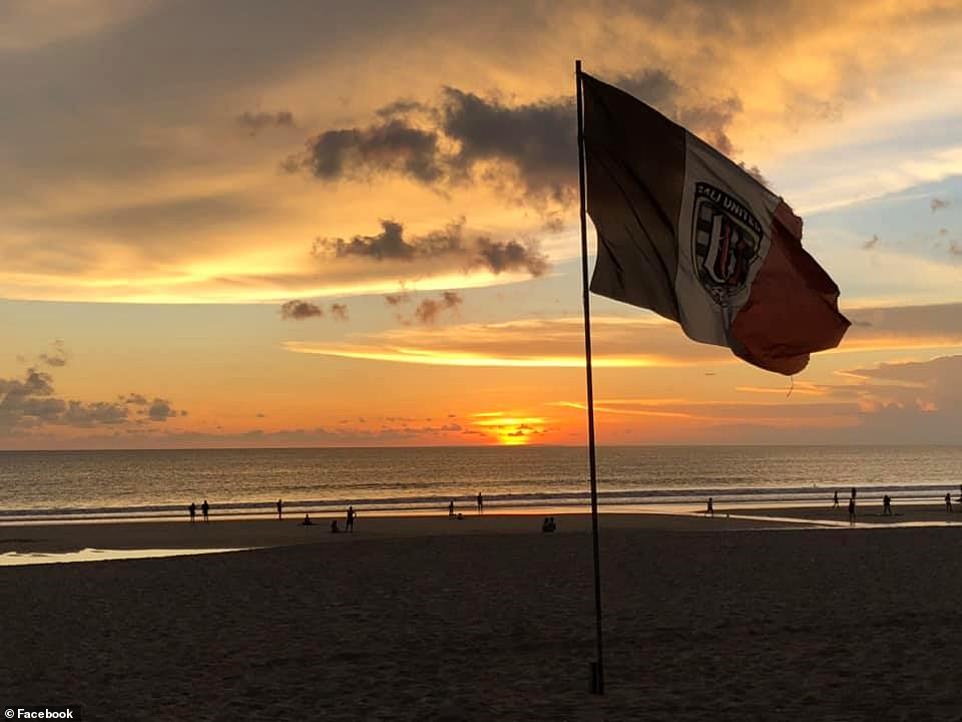 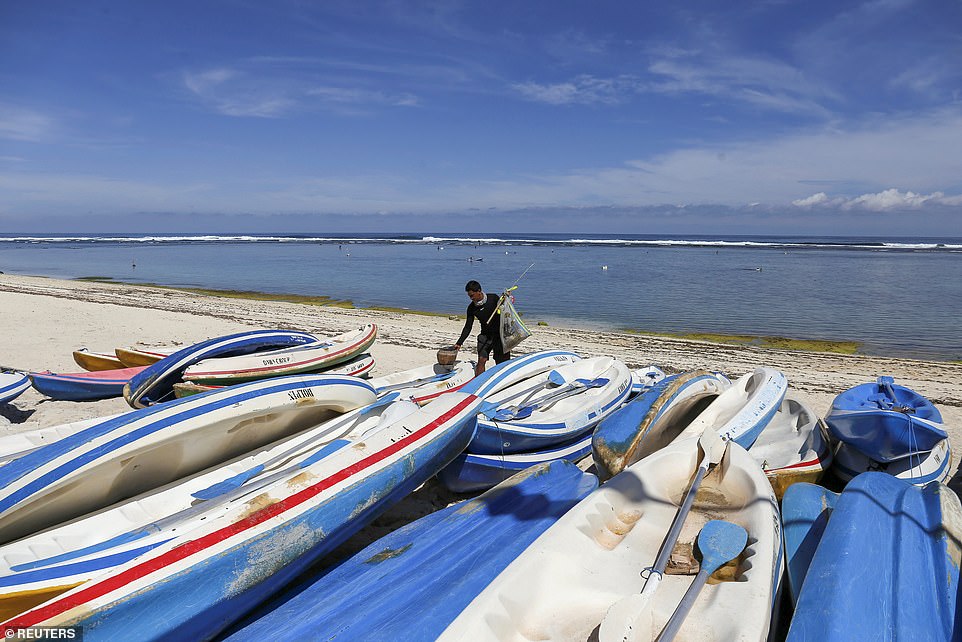 Mangku Nyoman Kandia has run tours on the island for more than 35 years and said the outbreak of the virus has been worse for the economy than the Bali Bombings.

‘The coronavirus has collapsed the Balinese economy … it’s been a steep drop since [mid-March] when social-distancing measures were put in place,’ Mr Kandia told the ABC.

Mr Kandia has now been forced to take up odd jobs like construction and driving, and has been digging into his savings to survive.

He said he was just one in 7,000 tour guides that had to stop work.

Harrowing photos have shown the busy streets of Seminyak almost empty and beaches in Kuta deserted.

Wedding photographer, Govinda Rumi, said it was unlikely he would have anymore weddings to shoot this year.

‘There’s zero income … I cannot see another wedding for me this year, because even if it gets better, people aren’t really spending that much money,’ Mr Rumi said. 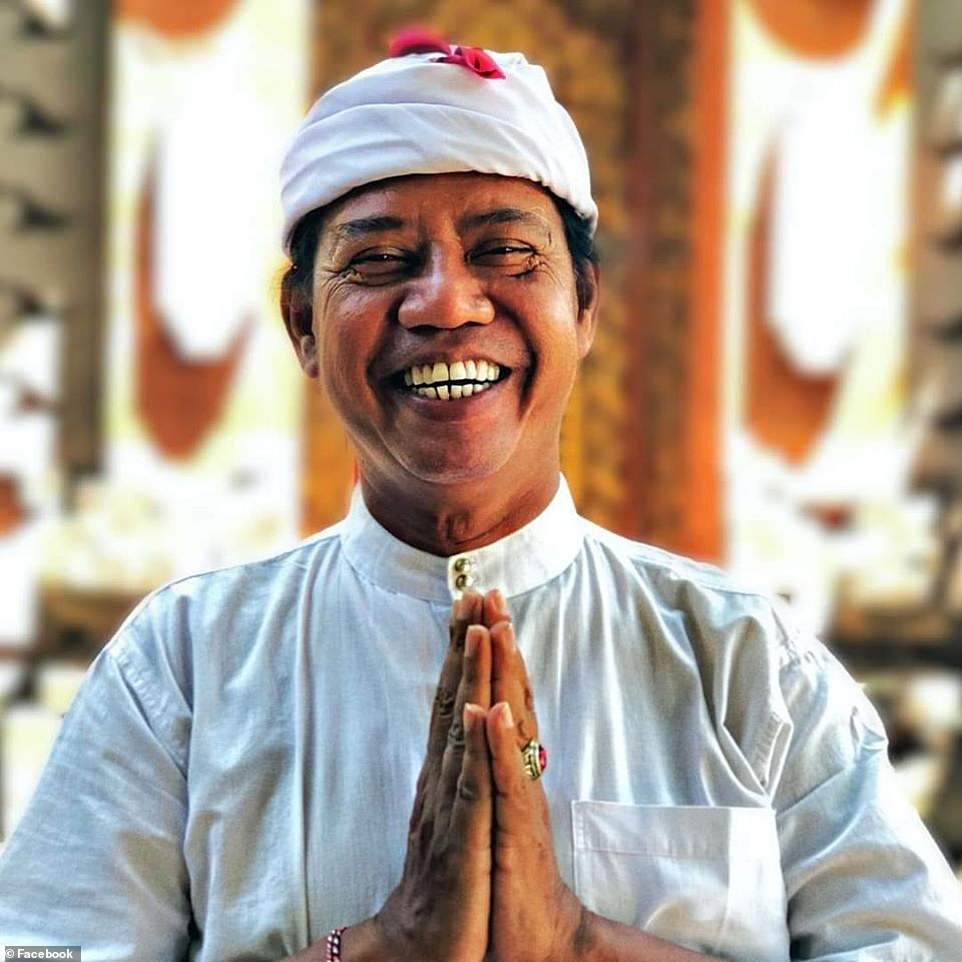 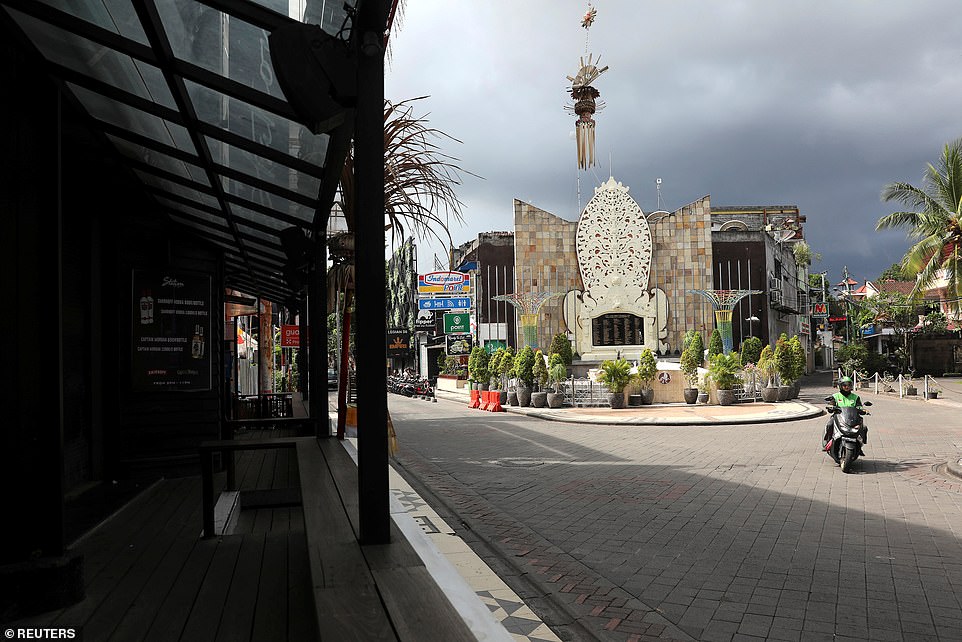 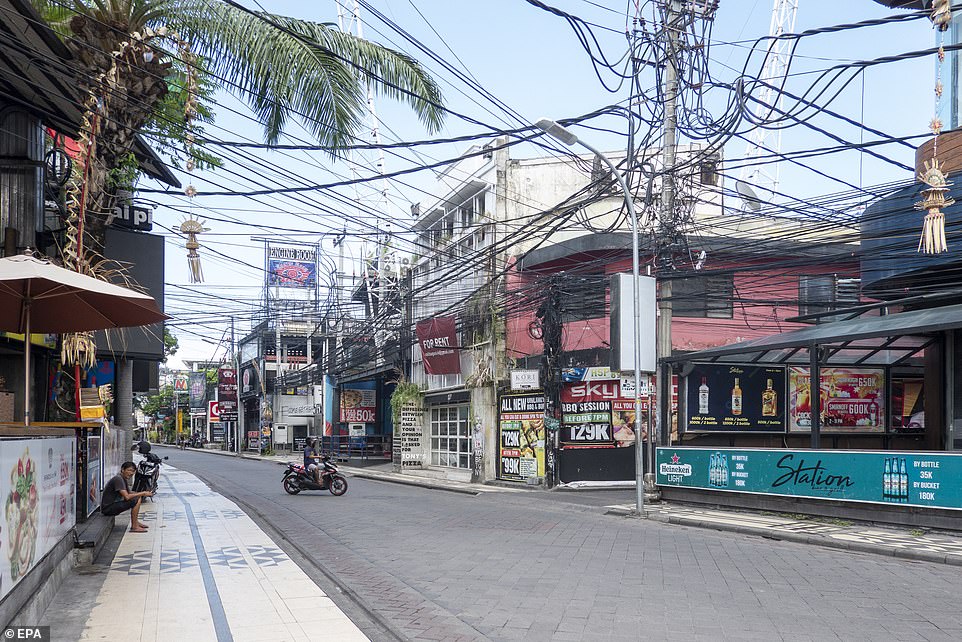 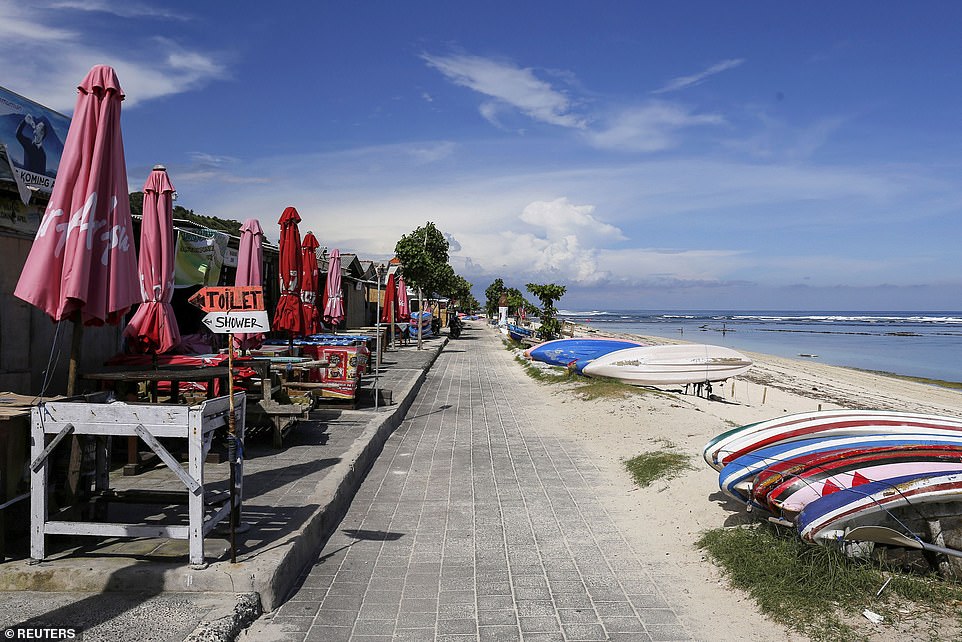 The boardwalk of Pandawa Beach is empty in the wake of coronavirus in South Kuta, Bali at the end of March

‘Photographers are staying alive by setting up home kitchens, or delivering food… so it’s time to get creative to survive.’

Some tourists were lucky enough to holiday in Bali before the travel ban kicked in.

Jean Louise Courtney shared a photo of a sunset in Bali at the end of March and said she saw staff with tears in their eyes as the last herd of tourists left the country.

‘We were quite possibly the last people to use our nanny, our driver and the last in our resort as they closed business when we left,’ she wrote on the Facebook.

‘I just wanted to say our last encounter with our Bali helpers (nanny & driver) we left them behind both standing watching us and they had tears in their eyes as we would be likely their last job for quite some time. 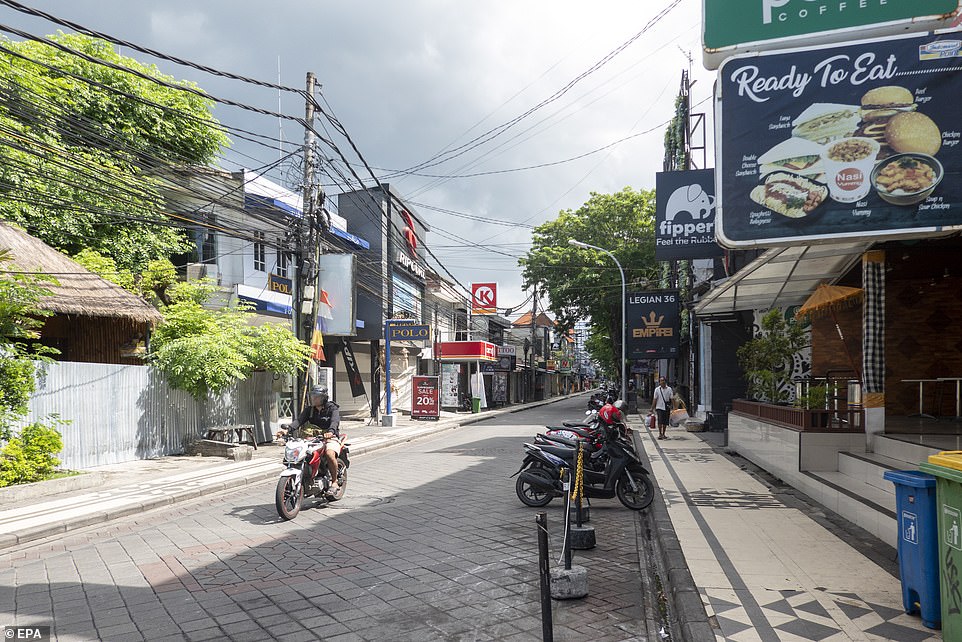 Shops are seen closed in streets of Kuta, Bali after tourists were banned from entering into Indonesia 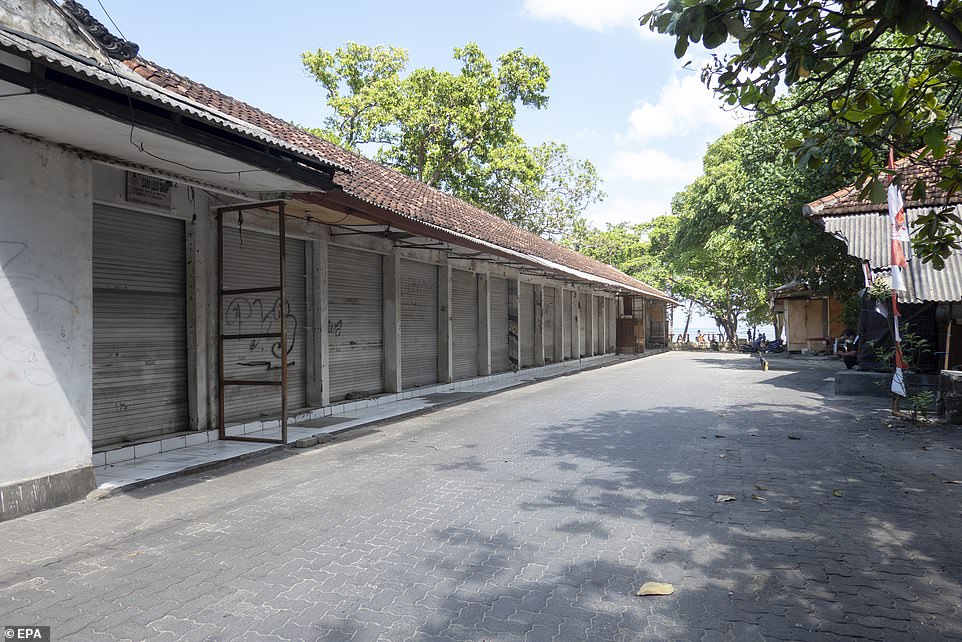 Closed souvenir shops are seen in Kuta, a hot spot for tourists in the Indonesian city. The city has since been left scarce of any tourists 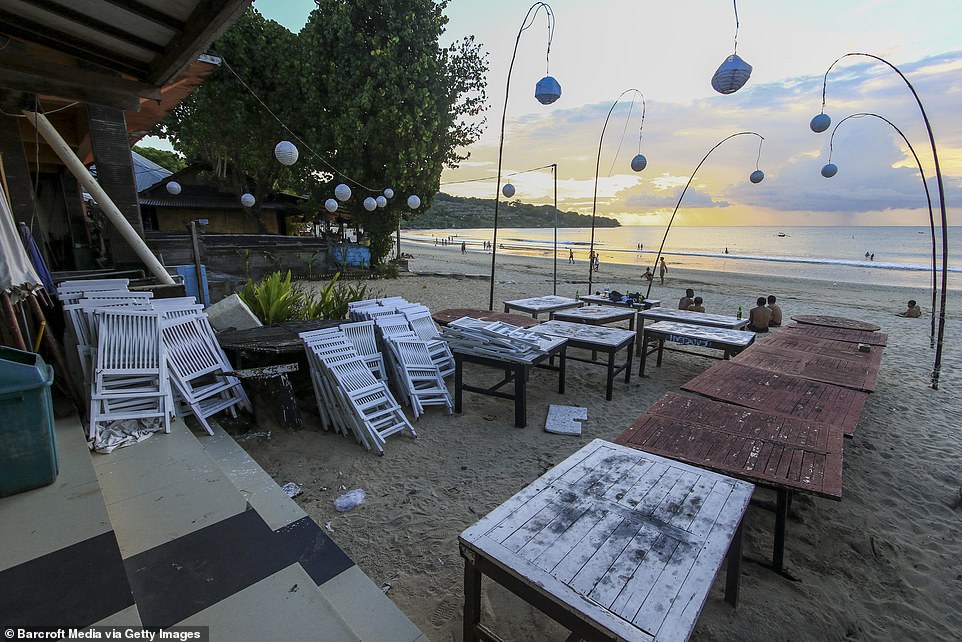 ‘Neither knew each other but both spoke to us about how Bali survived the bombings and grew again but think it is going to be much harder this time. Both had families to feed and I could feel their sadness and anxiety.’

Around 12 million people in Indonesia work in tourism based roles.

The government announced a total of $40billion would be used to help the Indonesian economy in three different stimulus packages.

It includes tax breaks and subsidies for individuals and businesses, along with an online upskill and training programs that can help out those financially impacted from coronavirus

But not everyone can access these programs and are forced to instead rely on their own councils to provide food and support. 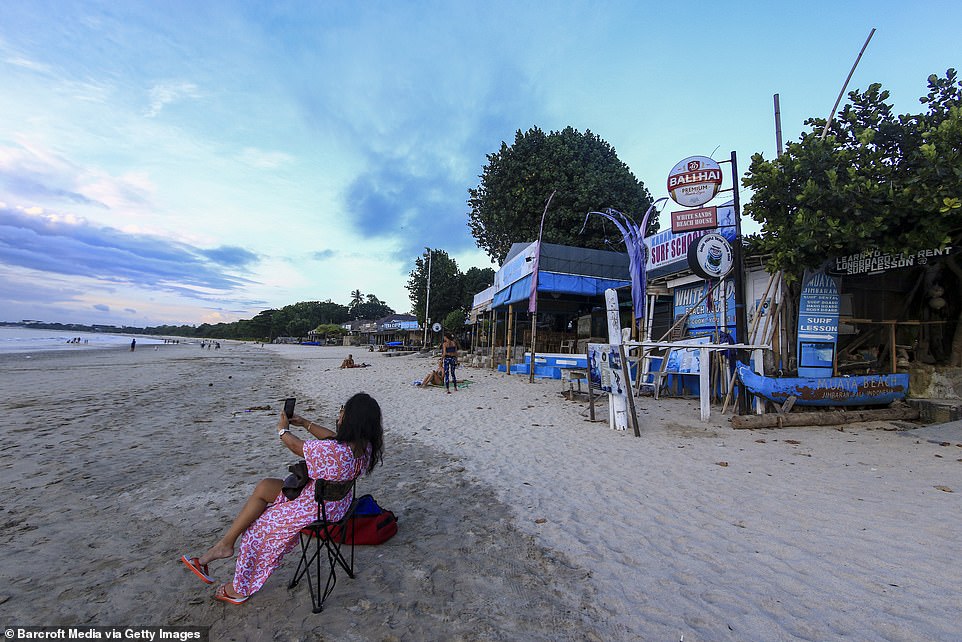 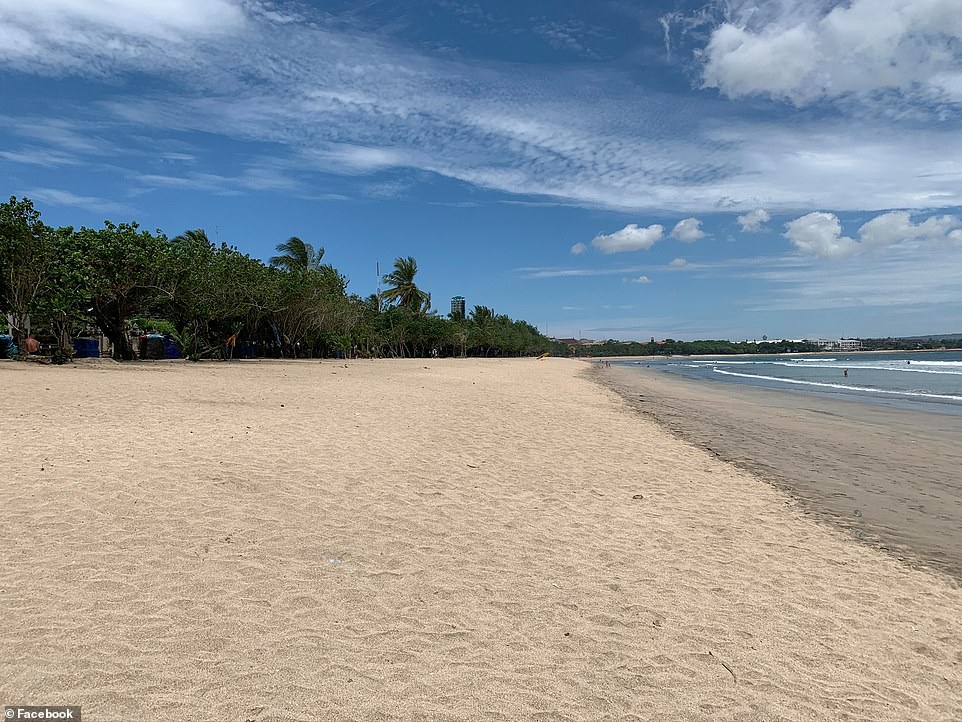 A deserted beach in Bali. Thousands of workers have been left jobless after tourists were banned from entering Indonesia 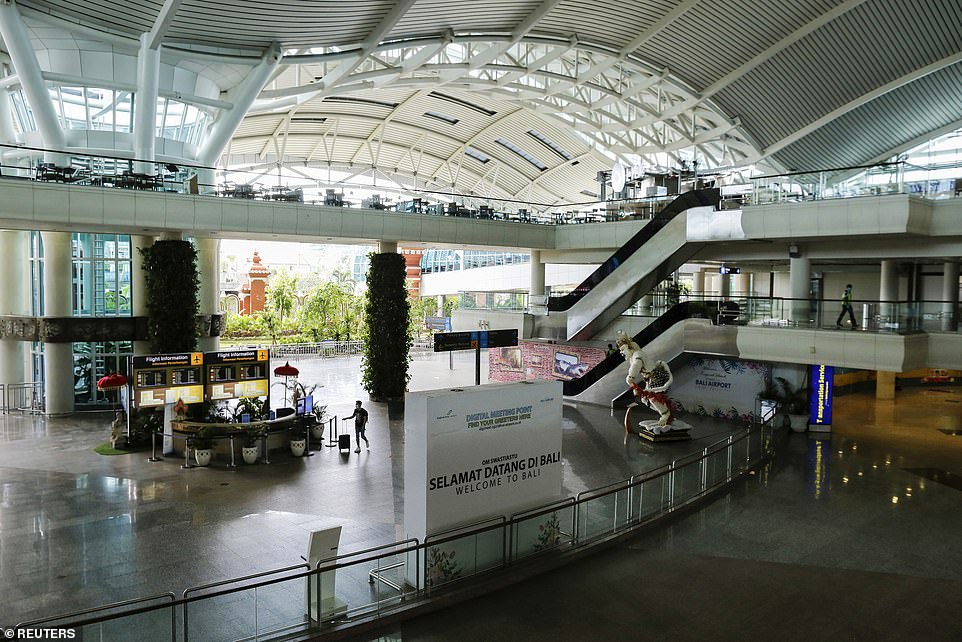 The Gusti Ngurah Rai Airport is almost empty after the virus spread throughout Indonesia, infecting more than 2,400 people 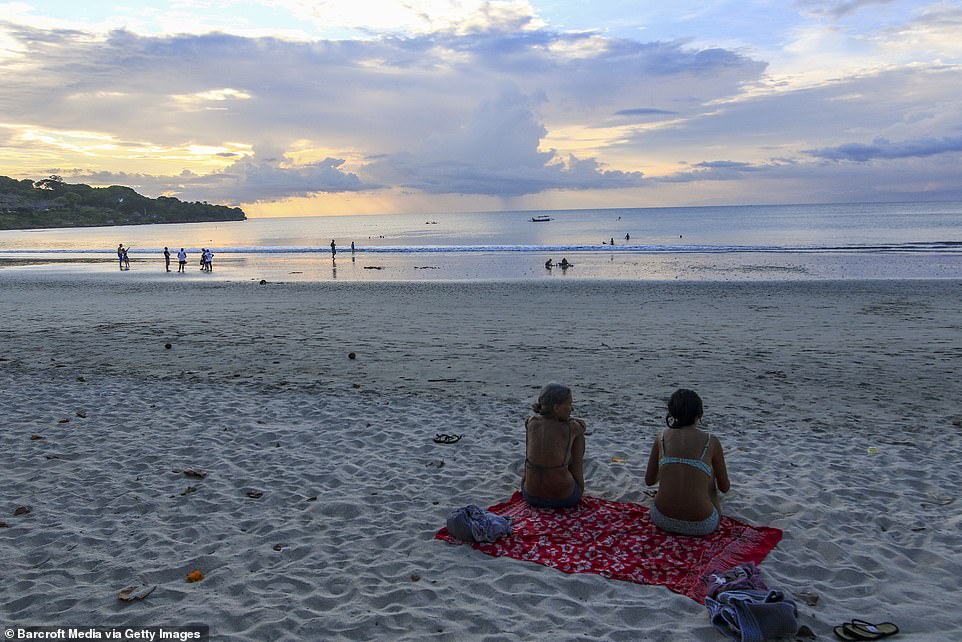