What a difference a week makes.

Photos taken just a eight days apart show Houston beginning to recover after the devastation of Harvey’s floods that left homes and roads under several feet of water.

The first set of images, taken on August 28, reveal a city underwater as roads turned into rivers, homes were surrounded by five foot high floodwater and desperate residents loaded their belongings onto boats and sailed or waded through the rising waters to safety.

Yet, the second set of pictures, taken on September 5, could be of a different place altogether. 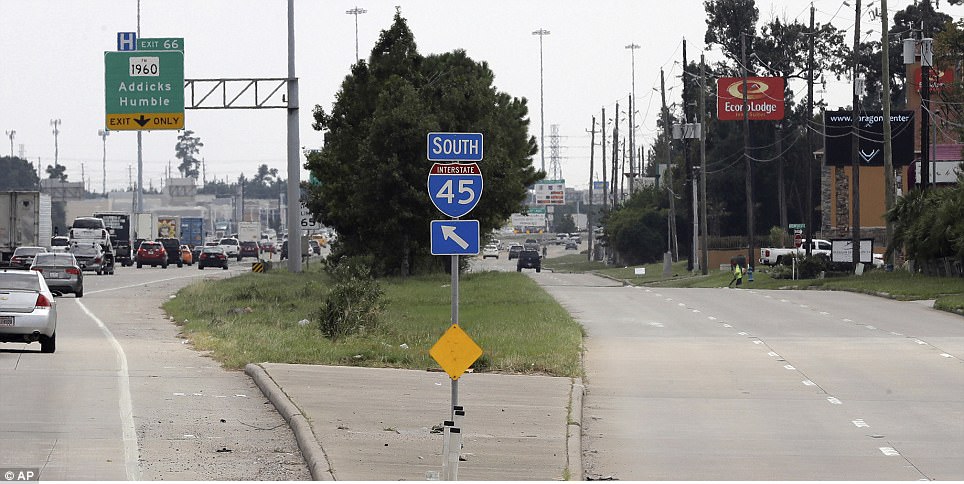 During floods, left: Volunteers pilot their rescue boats into a flooded neighborhood in Spring, Texas, to help rescue stranded residents from rising floodwaters following Hurricane Harvey on August 28. Just over one week later, right: Cars drive down the same street on September 5 after the floodwaters receded

During the flood, August 28, left: Five-foot-high floodwater surround homes in Spring, Texas. After, September 5: Damaged goods are piled up around the same homes after the water receded

Roads in Houston that a week ago were swamped with waist-deep water packed with boats ferrying drenched and terrified residents to safety, are now dry and busy with regular traffic – cars and trucks.

Meanwhile, huge piles of trash are left outside a formerly flooded home as families are forced to throw out their ruined possessions.

Houston area residents have picked up the pace of their recovery from Hurricane Harvey, jamming roads as they returned to offices and schools to help get the nation’s fourth largest city and its vital shipping and oil industries back on track.

The region is getting a boost from Mexico, which sent volunteers to shelters and is preparing to send relief supplies in the next few day. Mexican Red Cross workers were staffing shelters in three Texas cities. ‘We are more than glad to be helpful,’ said Gustavo Santillan.

During the floods, on August 28, left: Dozens of people flee their homes in rescue boats along the flooded street in Houston. On September 5: Traffic returns down the same street after the floodwaters receded 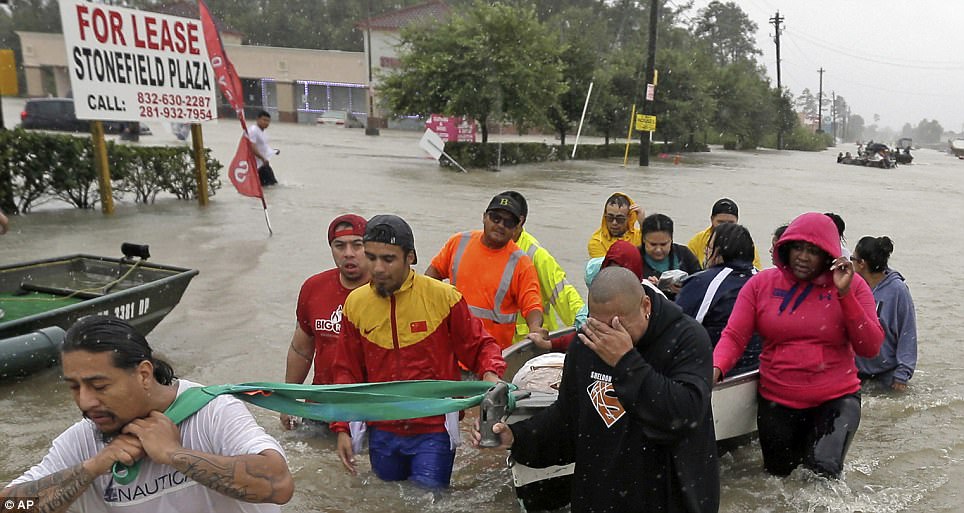 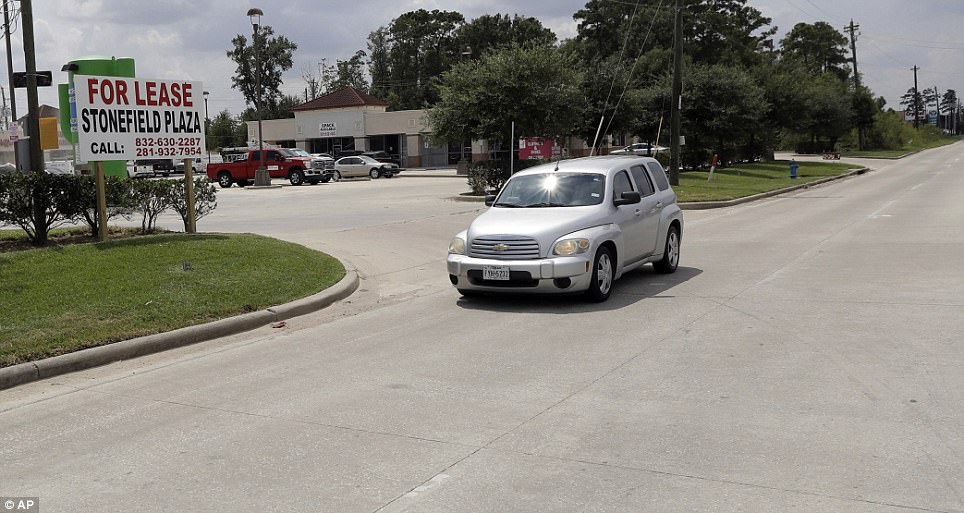 During the floods, on August 28, left: Evacuees wade down Tidwell Road in Houston as floodwaters from Harvey rise. After, on September 5, right: A car drives down the now dry and empty street

Large employers, universities and transit services reopened or began full schedules yesterday, with floodwaters receded and the Labor Day weekend behind them. But not all of the Houston-area’s 6.6 million residents were in position to go back to work and were dealing with home repairs and waterlogged possessions.

‘It feels surreal to be back at work,’ said Hannah Smith, 31, who spent part of her day putting office furniture moved ahead of the storm back in place ‘It is one step in the direction of whatever the new normal is.’ Harvey tore through Corpus Christi in southern Texas on August 25 before churning up the coast and hitting the Houston area especially hard.

The storm killed as many as 60 people, dumped more than 50 inches of rain and caused damages estimated as high as $180 billion, including to 203,000 homes.

Oil refineries, pipelines and shipping channels in the nation’s energy center have begun a gradual return to operations. Exxon Mobil on Tuesday said its fuel terminals in the Houston area were supplying gasoline and it continues to work on reopening a shuttered Baytown oil refinery. 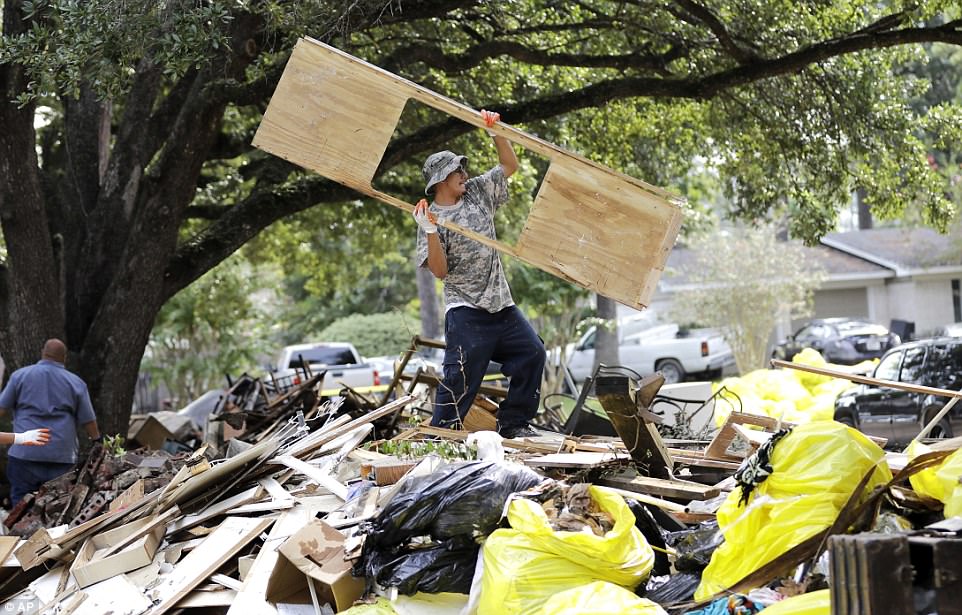 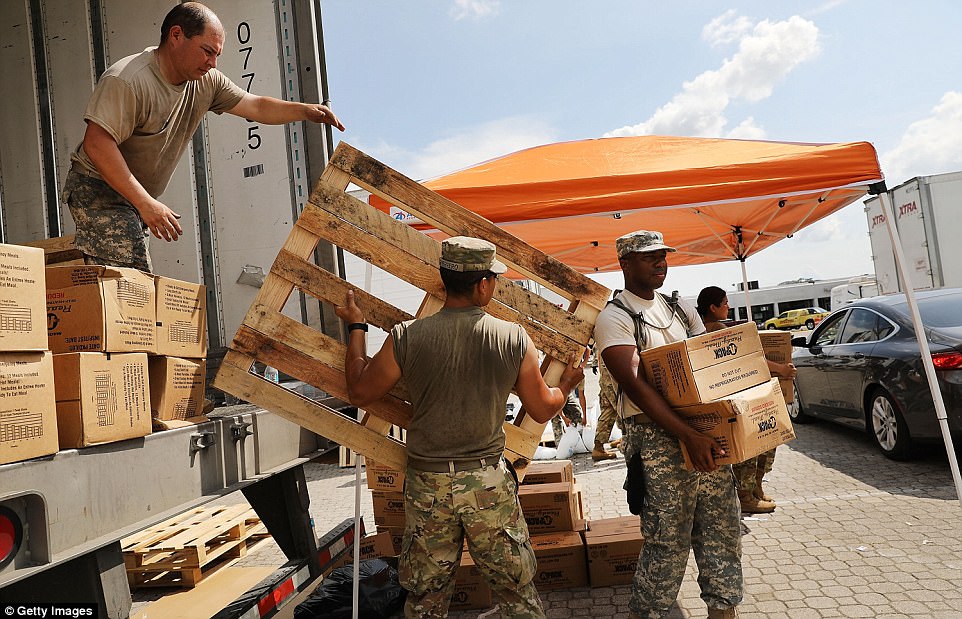 Members of the Texas National Guard distribute emergency meals and water as Texas slowly moves toward recovery from the devastation of Hurricane Harvey on September 5, 2017 in Orange, Texas 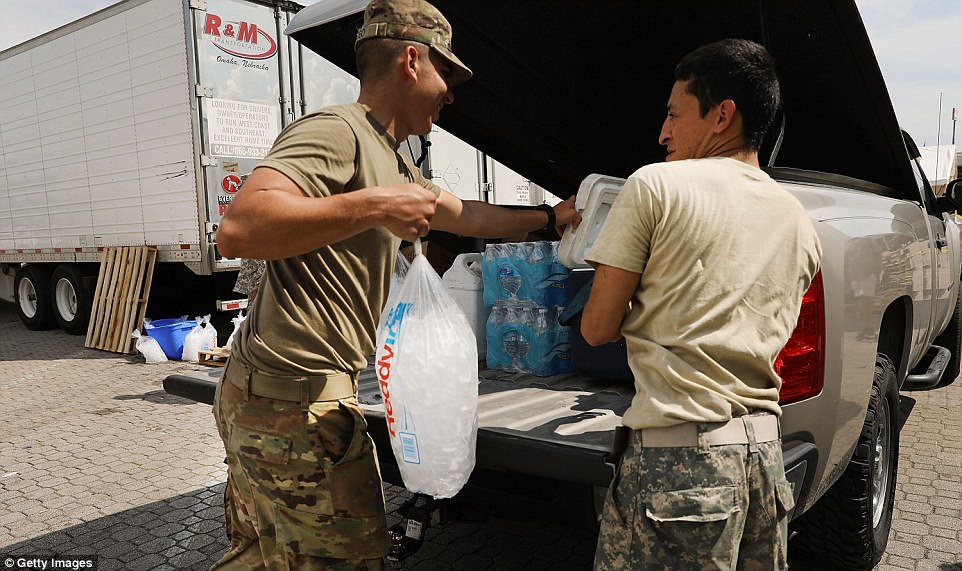 Almost a week after Hurricane Harvey, downtown Houston is returning to business, as roads begin to dry out, and floodwater recede 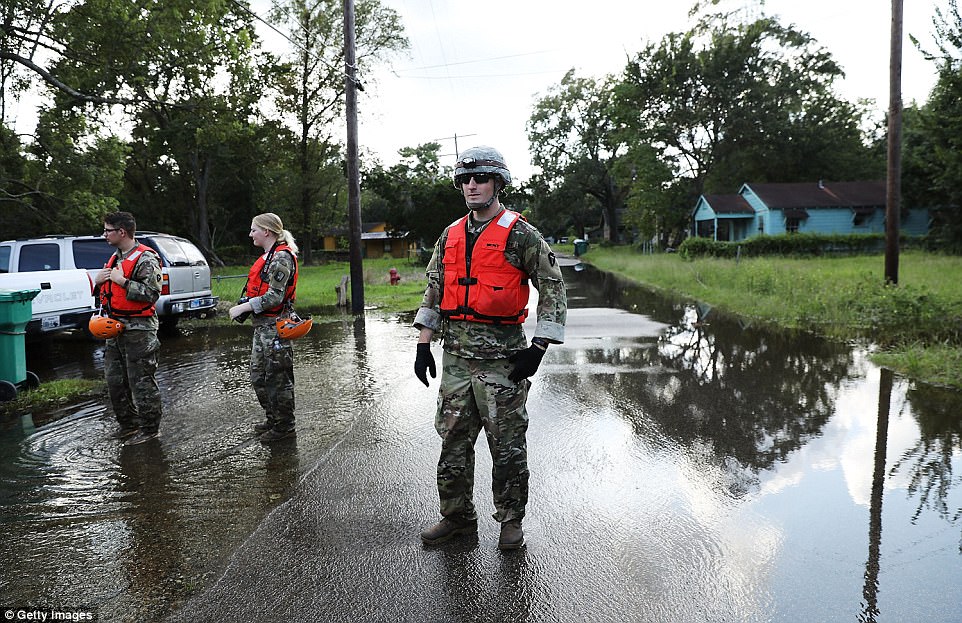 Members of the Texas National Guard walk the streets of Orange as Texas. Some neighborhoods still remained flooded and without electricity after the flooding last week 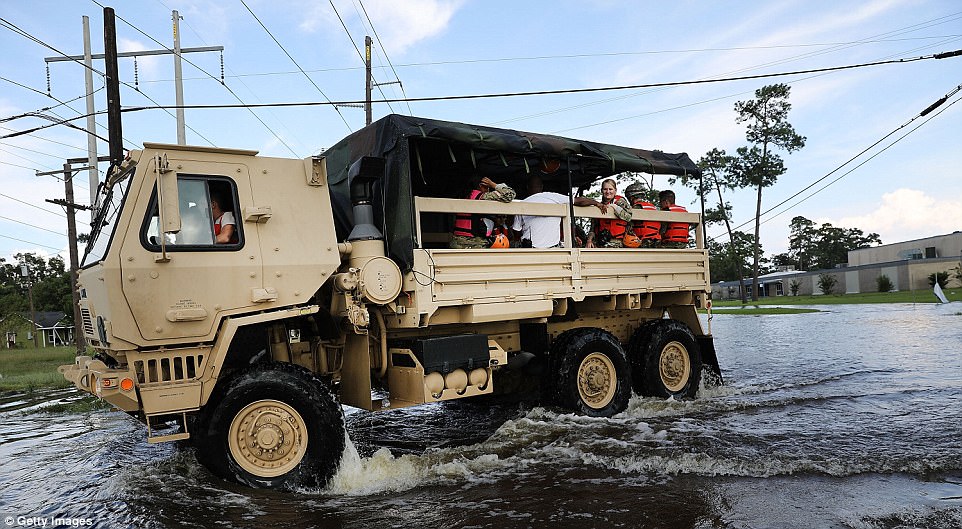 While downtown Houston is returning to business, thousands continue to live in shelters, hotels and other accommodations as they contemplate their future. Pictured: Members of the Texas National Guard drive through the still flooded streets of Orange

Motiva Enterprises, operator of the nation’s largest refinery, said it is in the process of restarting operations at its Port Arthur, Texas, plant.

Some industry stalwarts were still out of commission though. ConocoPhillips closed its Houston headquarters through September 11. BP’s Houston campus suffered severe flooding and remained closed. Portions may be out of use until December, Chief Executive Bob Dudley told Reuters.

About 650 of BP’s more than 5,000 Houston area full-time staff reported damage to their homes.

‘I´ve got to get work done but I don´t think it´ll be a productive day,’ said Daniel Semetko, 60, a Houston energy company worker, citing the number of people who were out of their homes due to storm damage. Matt Murray, a volunteer with an animal rescue organization, carries a small dog he found abandoned beside a flooded home on September 5 in Orange, Texas. Thousands of pets and livestock have either run away or been left to fend for themselves after Hurricane Harvey ravaged parts of the state of Texas 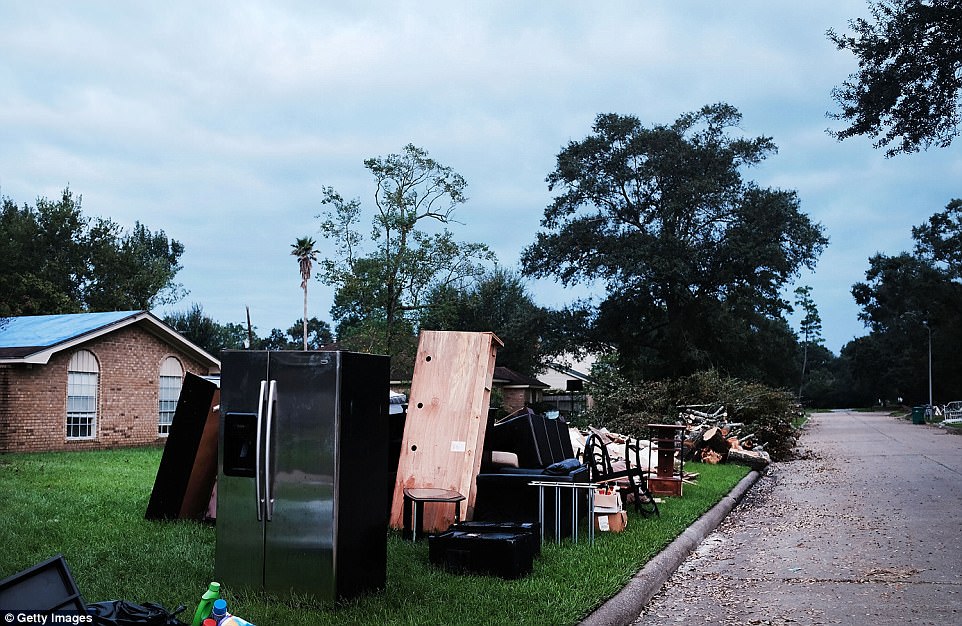 Discarded items sit outside of a flooded home in Orange as Texas slowly moves toward recovery from the devastation of Hurricane Harvey on September 6, 2017 in Orange, Texas 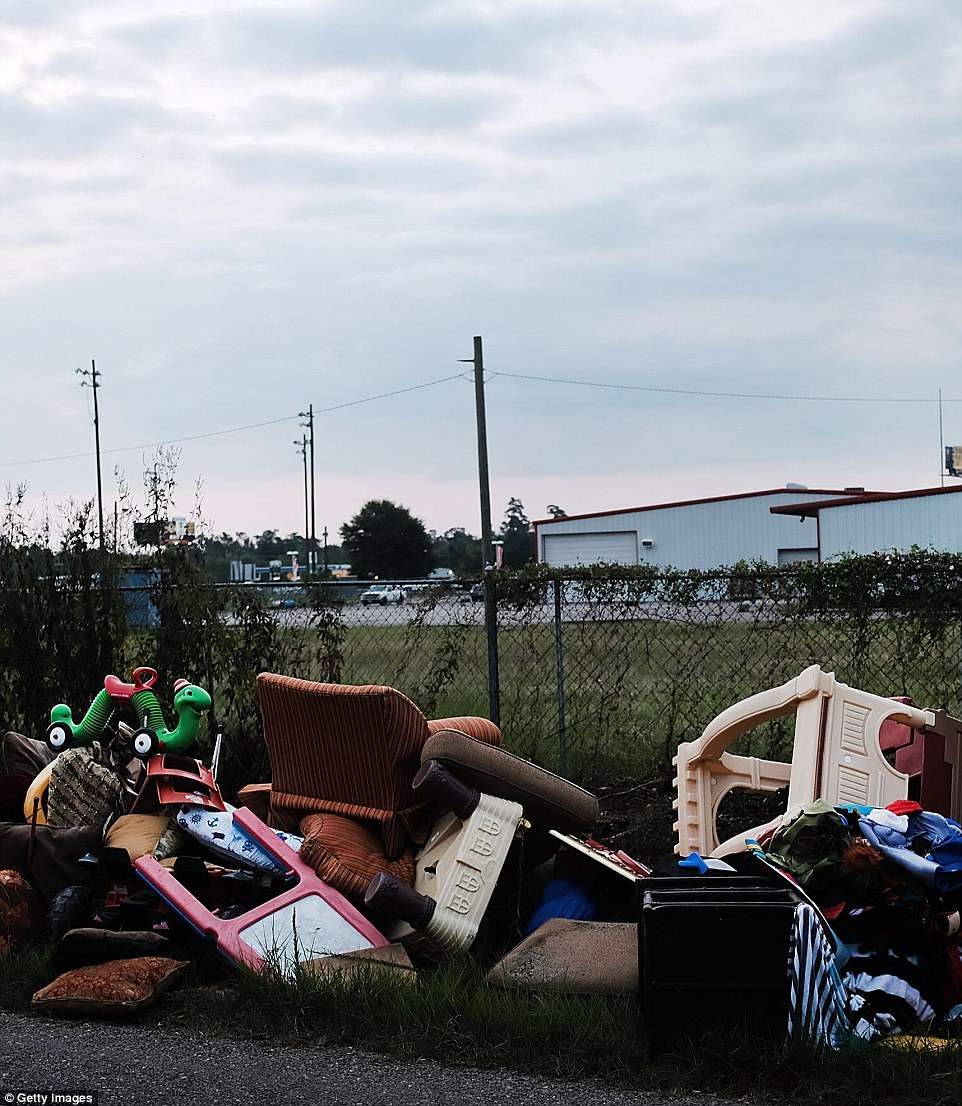 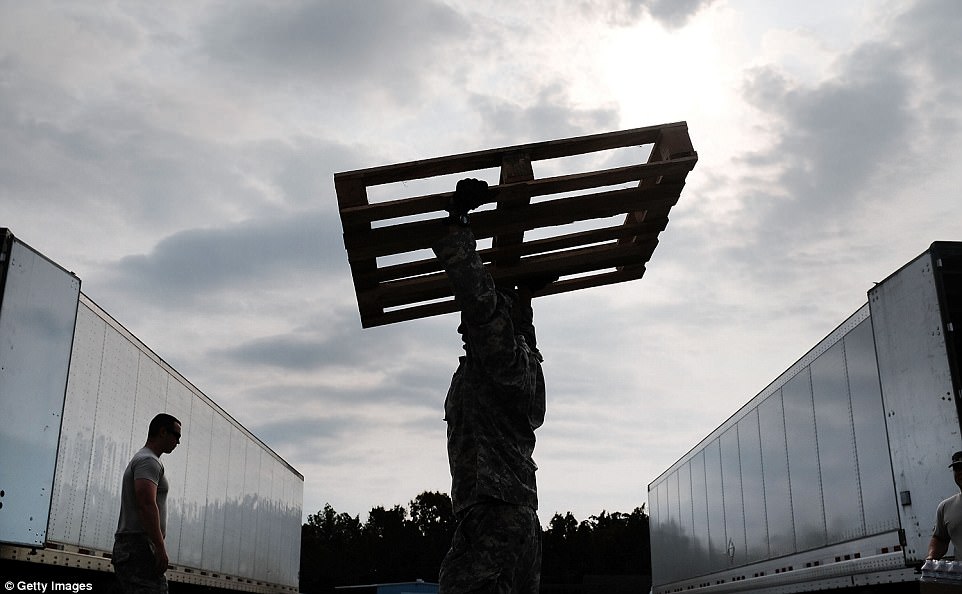 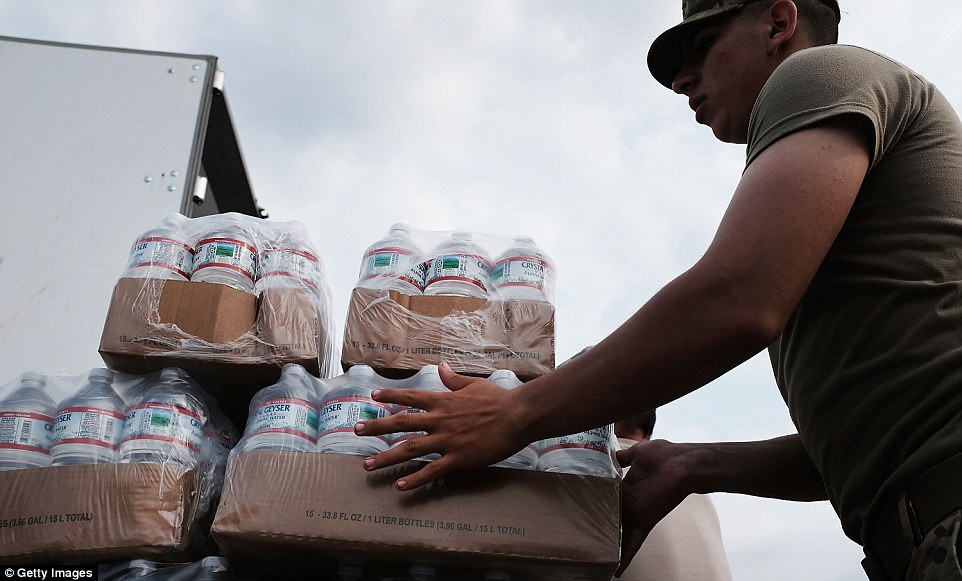 Almost a week after Hurricane Harvey ravaged parts of the state, some neighborhoods still remained flooded and without electricity. While downtown Houston is returning to business, thousands continue to live in shelters, hotels and other accommodations as they contemplate their future 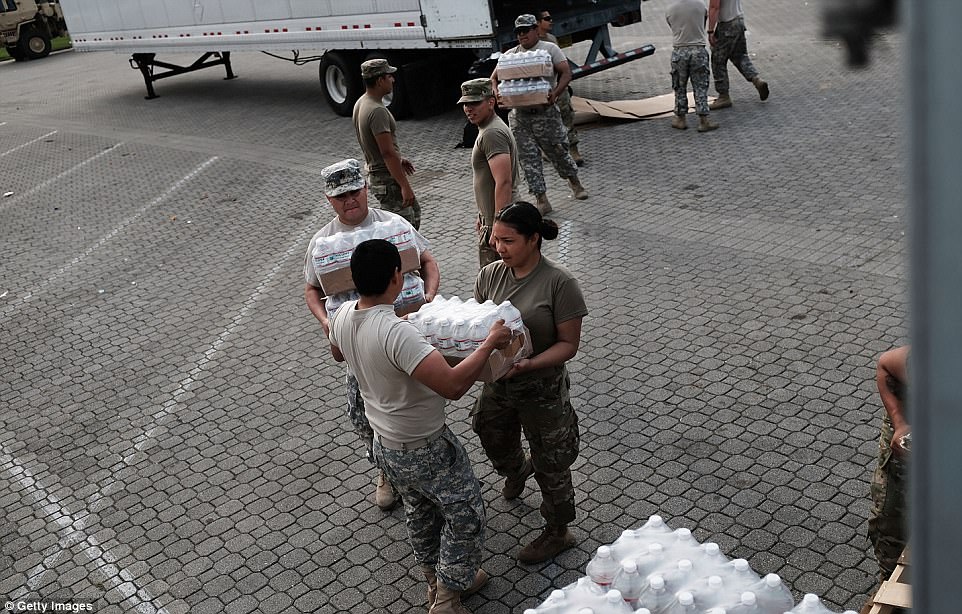 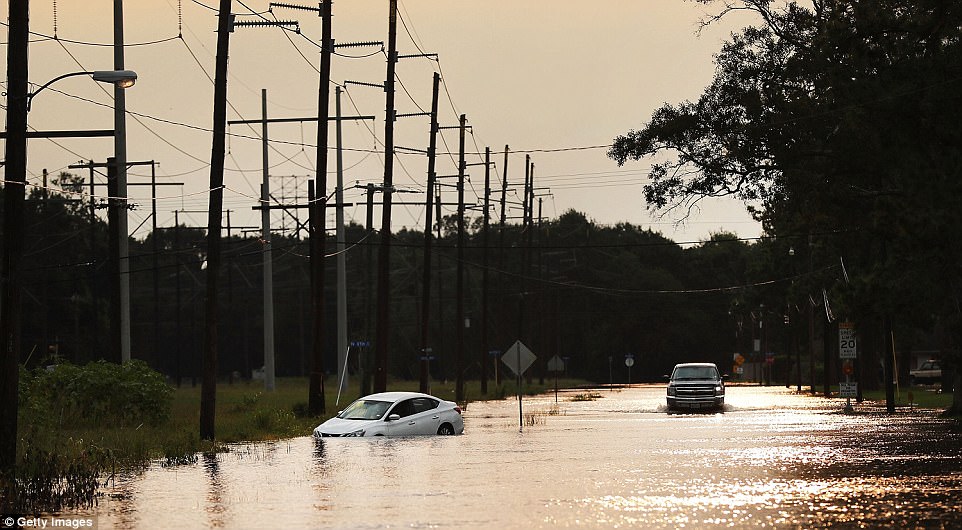 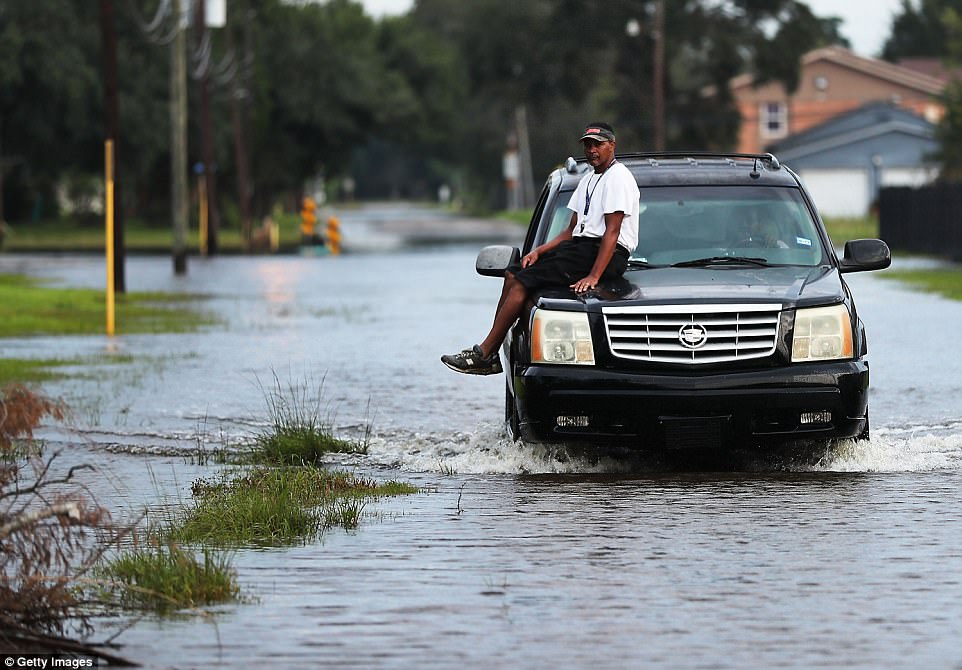 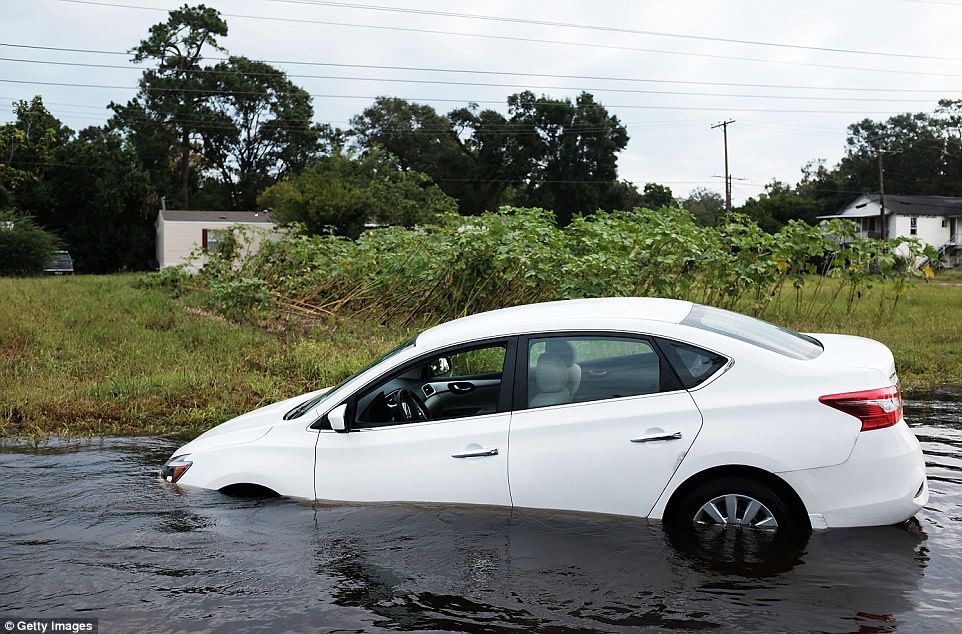 With extensive property damage across the region, local and federal prosecutors formed a task force to investigate reports of home repair fraud and people posing as police to facilitate theft and other crimes, officials said. About 80 investigations into complaints were underway, said David Green, a Department of Homeland Security special agent.

Houston’s school district, the nation’s seventh largest, remains closed this week to repair flooded schools. The district has said about 75 of its 275 schools suffered major or extensive flood damage, but other school districts in the area and major universities were open for class.

The U.S. House of Representatives on Wednesday approved roughly $8 billion in initial emergency aid for Harvey relief and rebuilding. A Senate vote is expected later this week.

As Houston picked up the pieces from the devastation of Harvey, a new and even more powerful hurricane Irma, which has been upgraded to a ‘potentially catastrophic’ Category 5 storm, hit the US today.