PIC EXC: Katy Perry and Orlando Bloom can’t keep their hands off each other during Capri yacht day

They have been spending time exploring Europe over the last few months.

And on Sunday, Katy Perry and shirtless Orlando Bloom couldn’t keep their hands off each other during a luxury yacht day in Capri, Italy, taking every opportunity to kiss and cuddle.

The swimsuit clad popstar, 36, and her actor beau, 44, showed off their tanned bodies while enjoying their time with family and friends. 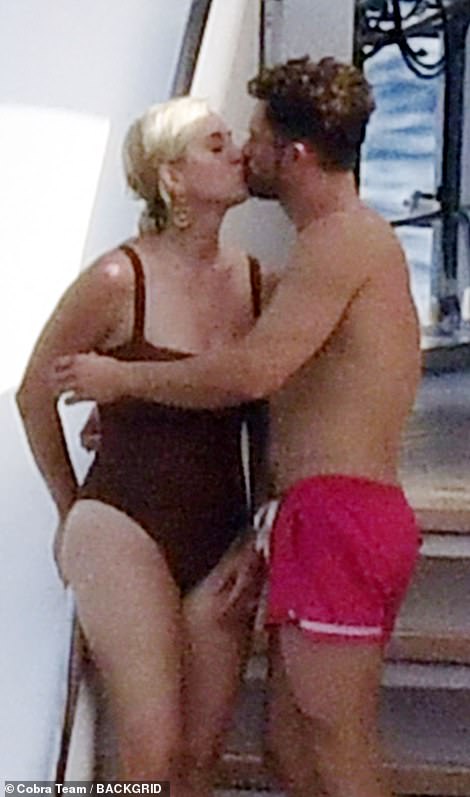 Loved-up! On Sunday, Katy Perry, 36, and shirtless Orlando Bloom, 44, couldn’t keep their hands off each other during a luxury yacht day in Capri, Italy

Orlando wore his red trunks as he dived off the yacht and into the warm blue sea for a swim, and joked about as he tried to balance on a surfboard.

As the sun continued to blaze down on the couple, Katy changed into a long summery floral patterned dress.

The doting mother held her adorable baby Daisy while out on their fun-filled Italian family holiday. 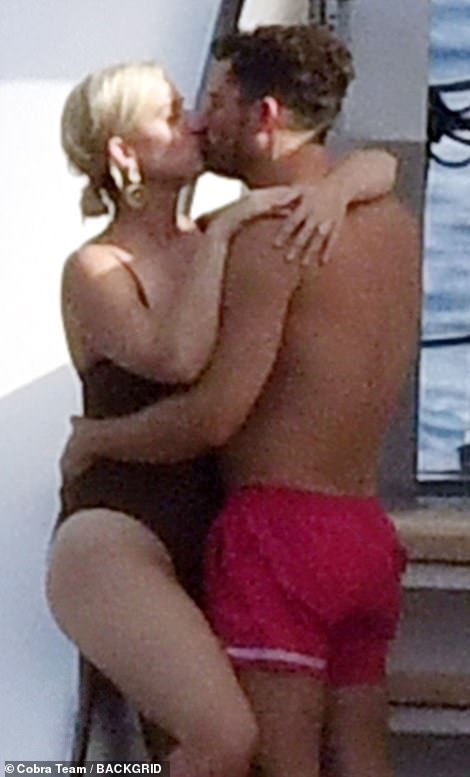 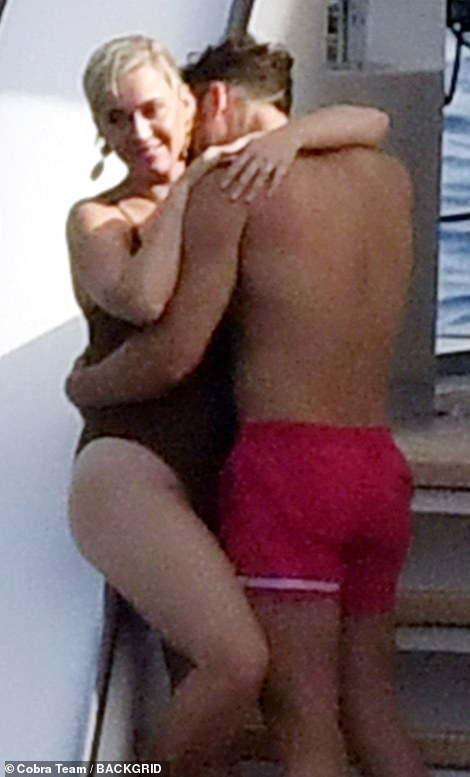 Sizzling: The couple sent temperatures soaring as they enjoyed some alone time

Katy and Orlando began dating in 2016 and split up the following year before they reunited in February 2018.

The couple got engaged the following February and welcomed their daughter Daisy Dove in August 2020.

Speaking to the latest edition of L’Officiel USA, Katy gushed about her other half for not only the way he treats their daughter but also how he acts as a dad to his son Flynn, from a previous relationship.

Katy gushed about Orlando’s relationship with the 10-year-old he shares with model Miranda Kerr as she said: ‘I was able to witness him and his fatherhood.

‘The way that he showed up for him and continues to show up for him, and the efforts that he makes and the distance he goes, I think that’s one of the reasons I made that conscious decision.

‘I was like, “Here’s the father of my future children.” I could see his kindness, empathy, care, and tenderness. I courted that. I was like, ‘Okay, this is different.’

‘And this is his first girl, so it’s a totally different feeling for him. I’m really, really grateful to have him. And he really shows up in a huge emotional way, which is unique for me.’

Orlando proposed on Valentine’s Day 2019 and in an interview with Vogue India last year Katy gushed about their ‘spiritual journey’ and called him ‘a saint.’

The Roar singer also said that her relationship with her child has brought her the unconditional love she had always been searching for.

She explained: ‘As a performer I’ve always relied on the love and acceptance and validation of the outside world and that ultimately can waver at times. 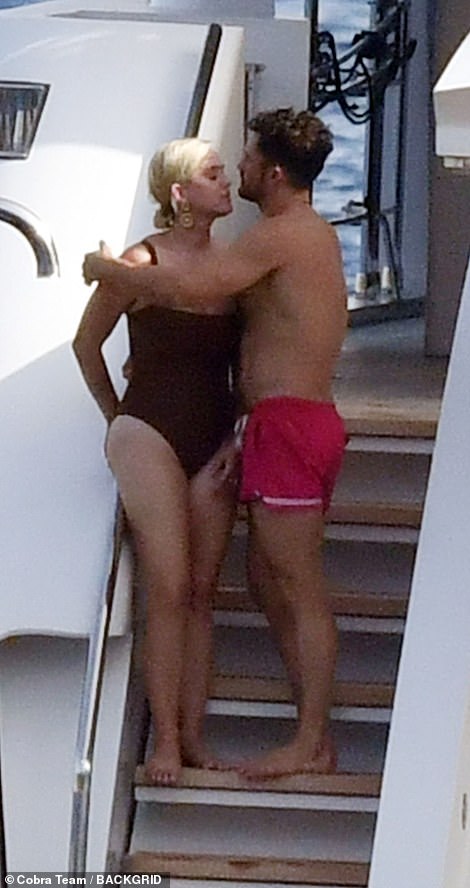 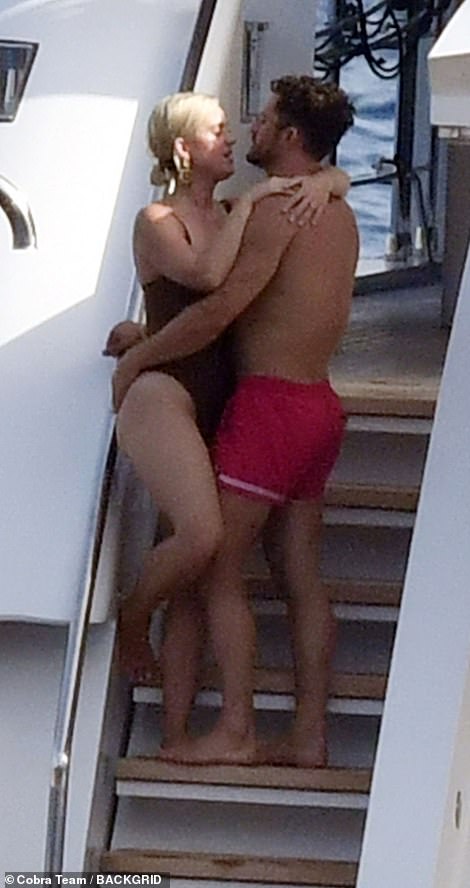 Pucker up! Orlando pulled his lady in for a kiss with Katy hitching her leg up onto the actor’s side 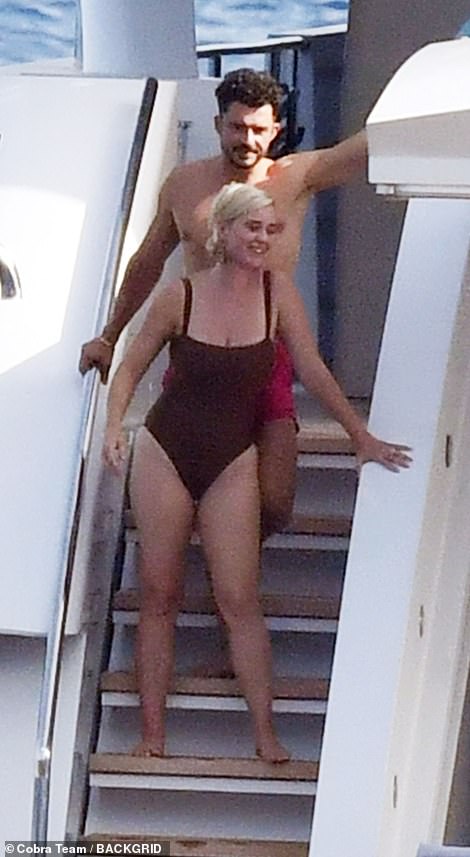 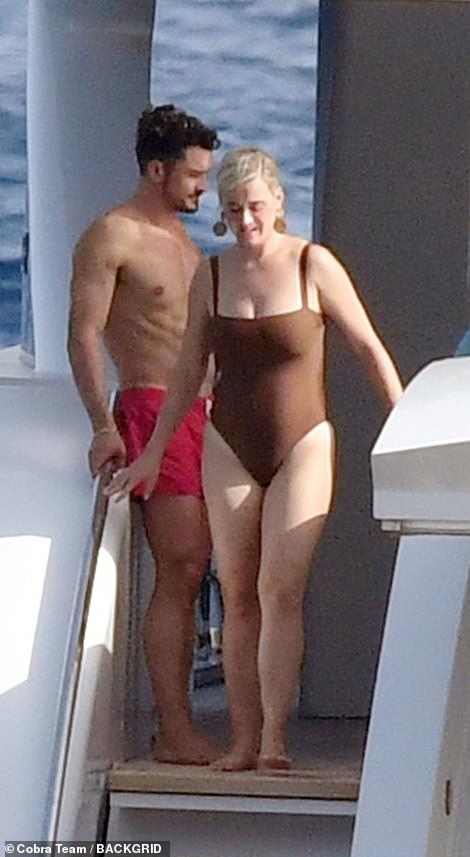 Easy does it: The A-list couple made their way down the boat’s stairs to the water’s edge 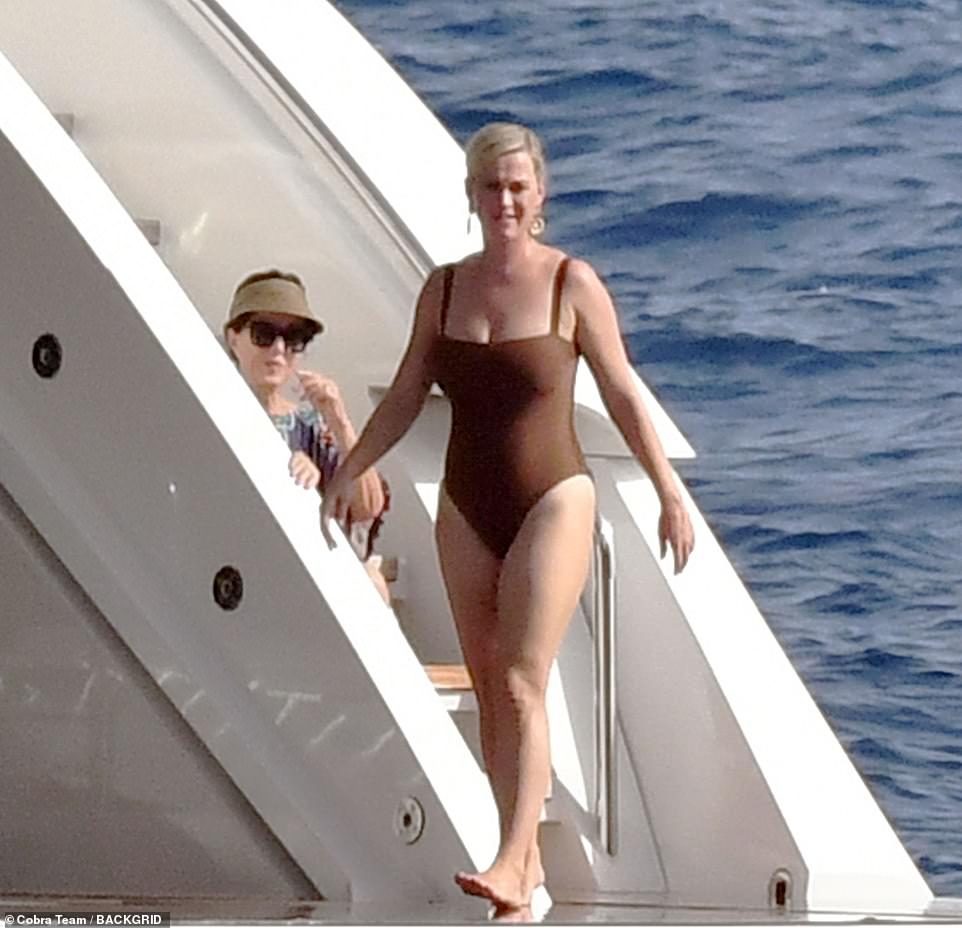 Radiant: The hit-maker looked radiant as she lapped up the sunshine make-up free 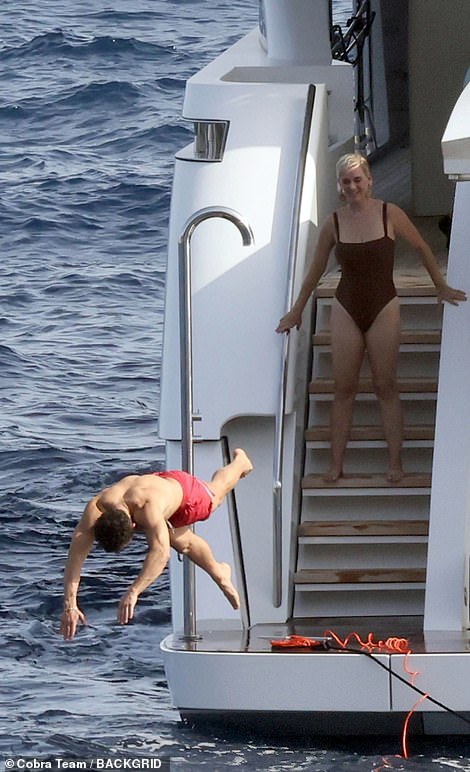 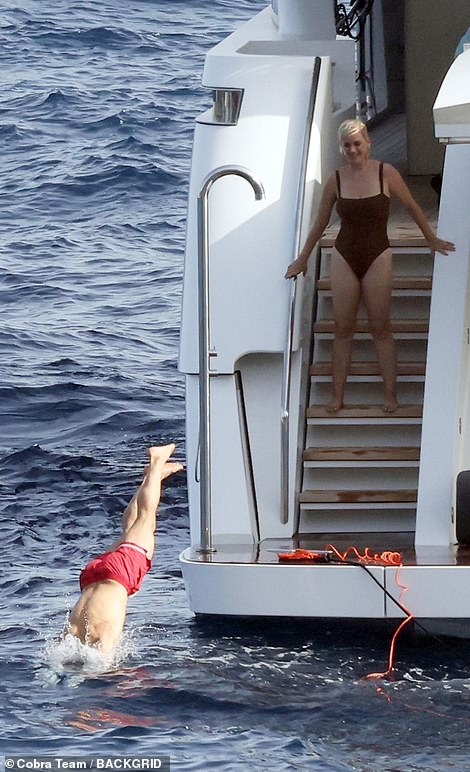 In he goes! Katy watched on as Orlando dived head first into the blue waters 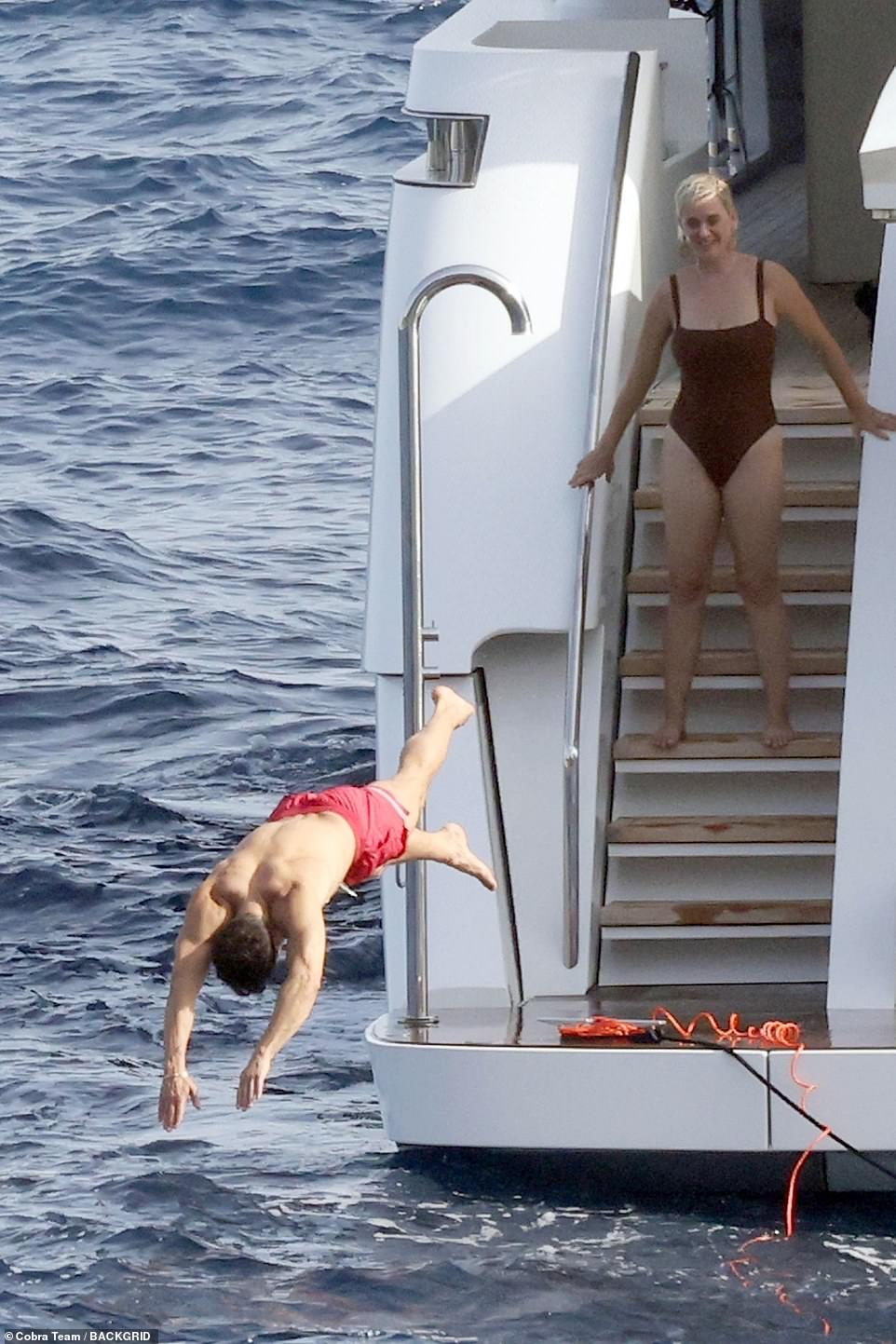 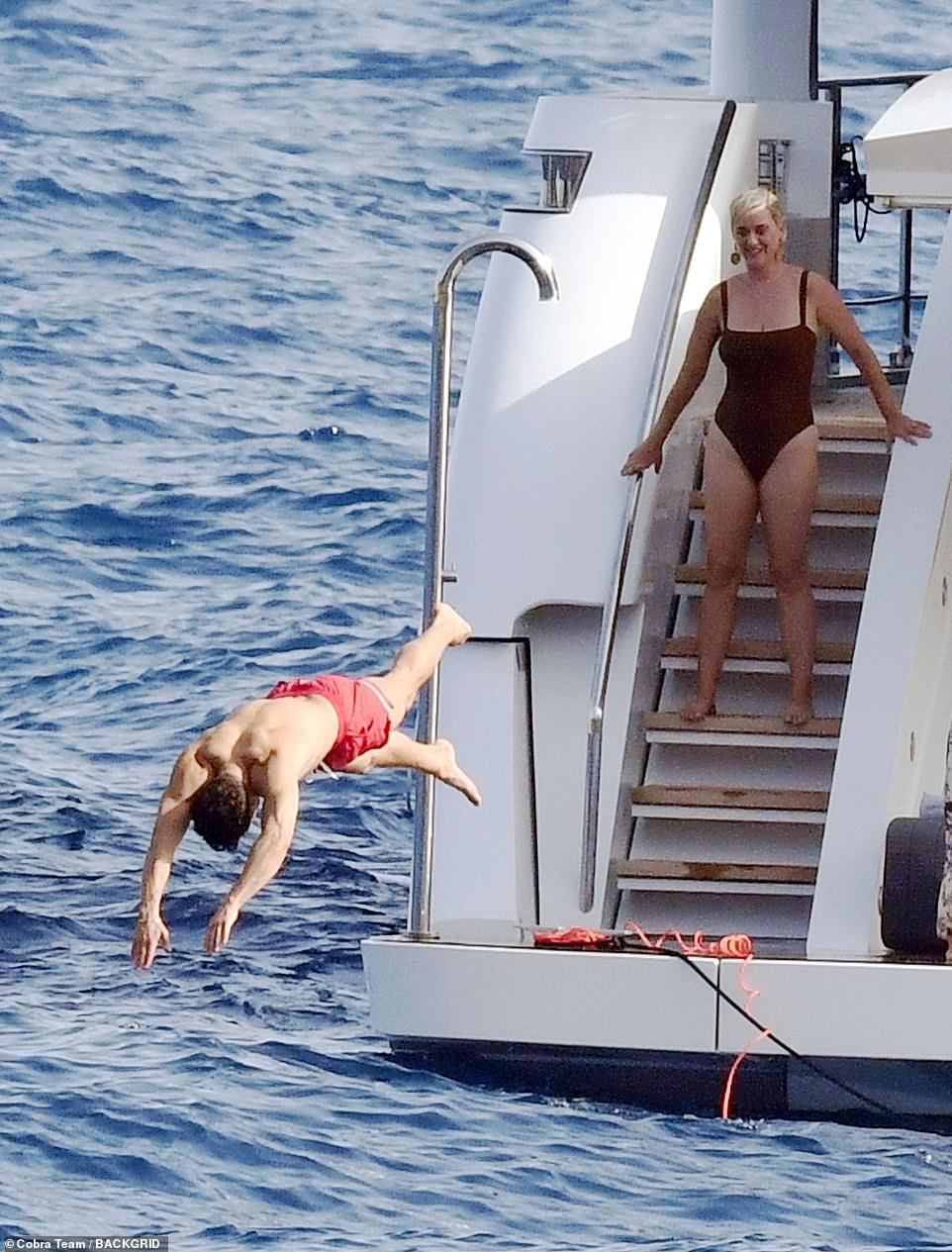 Getting air: Orlando got some serious air as he leapt off of the enormous vessel

Katy – who has previously had high-profile relationships with Russell Brand and John Mayer – even said that the birth of her daughter and relationship with Lord Of The Rings star Orlando even healed wounds she gained from past relationships.

She said: ‘I always felt like I was walking around with a little bit of pain in my heart concerning love.

‘And my fiancee has done a great job at really helping to mend that. But this just went underneath all that and got so deep. It’s just there, that love is there.

‘I’d heard about unconditional love, but now I’m really experiencing it. There’s a wholeness that has happened.’ 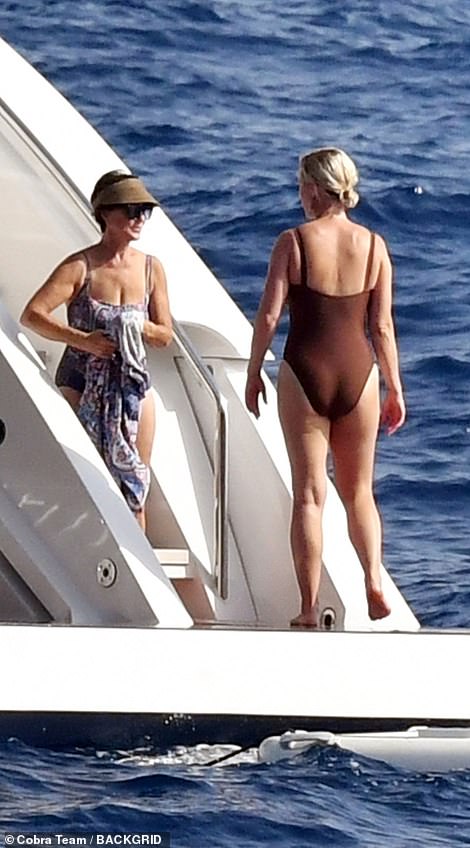 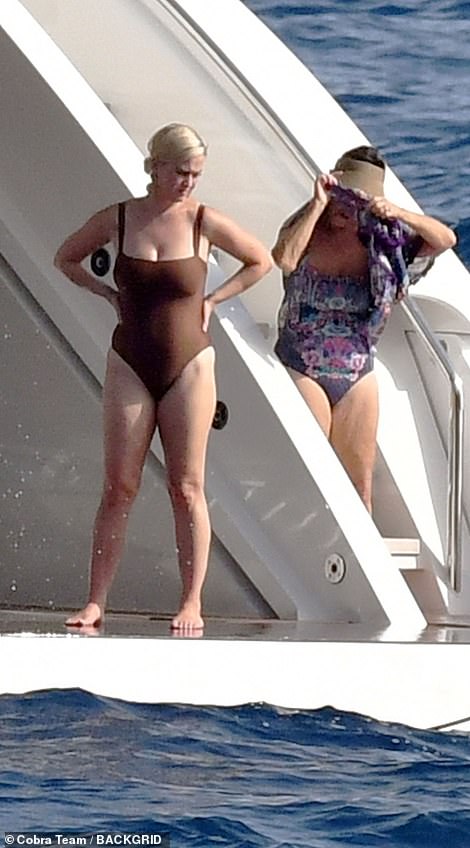 Chatting away: Doting mother Katy chatted away to her mother Mary as Orlando enjoyed a dip 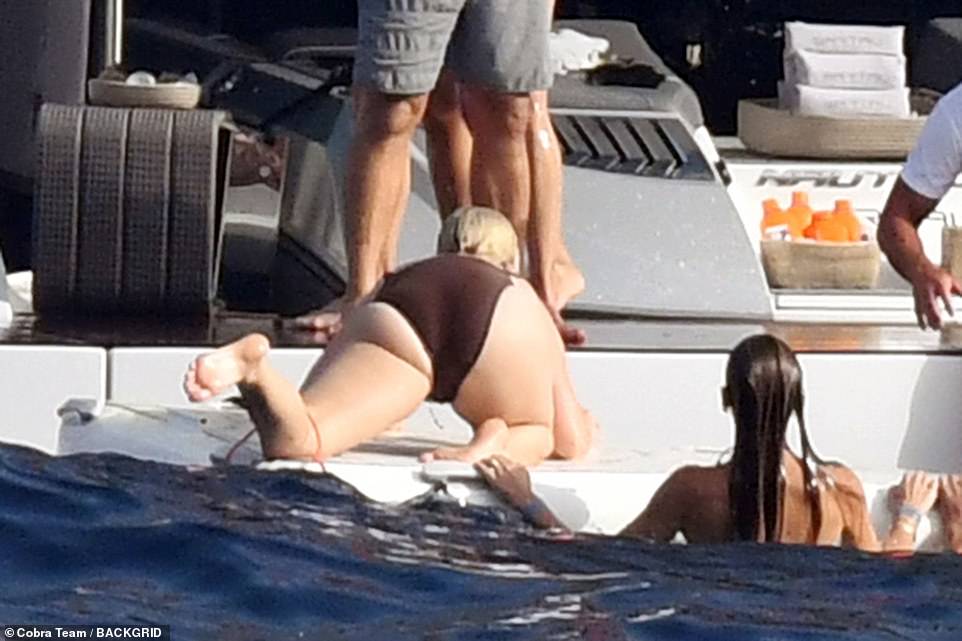 In she goes! Katy eased herself into the water, opting not to dive in head first like her partner 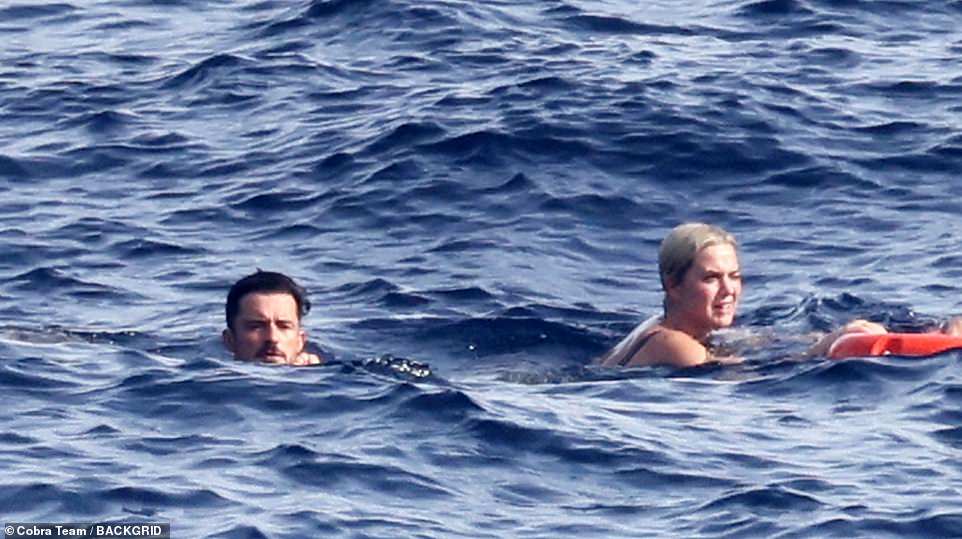 How’s the water? The water appeared to be the perfect temperature as Katy joined her fiancé 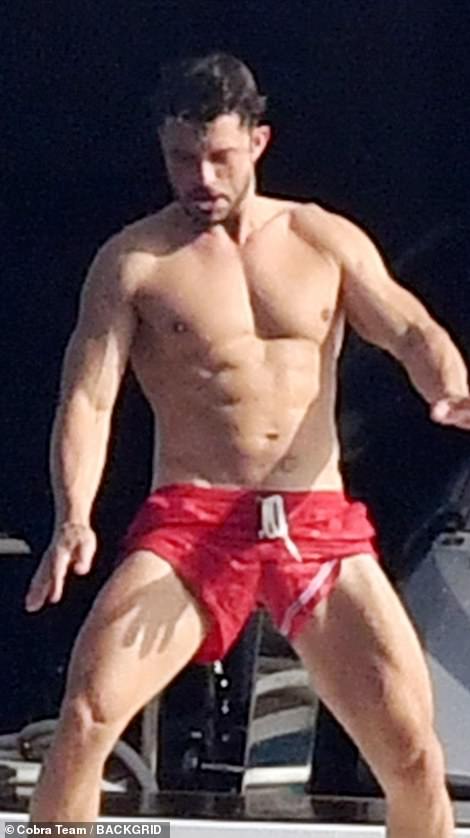 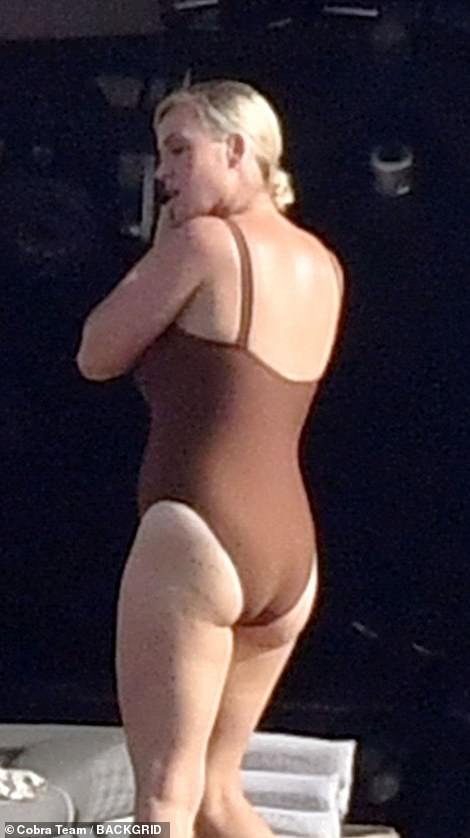 Steady on! Orlando appeared to loose his balance while standing over the water 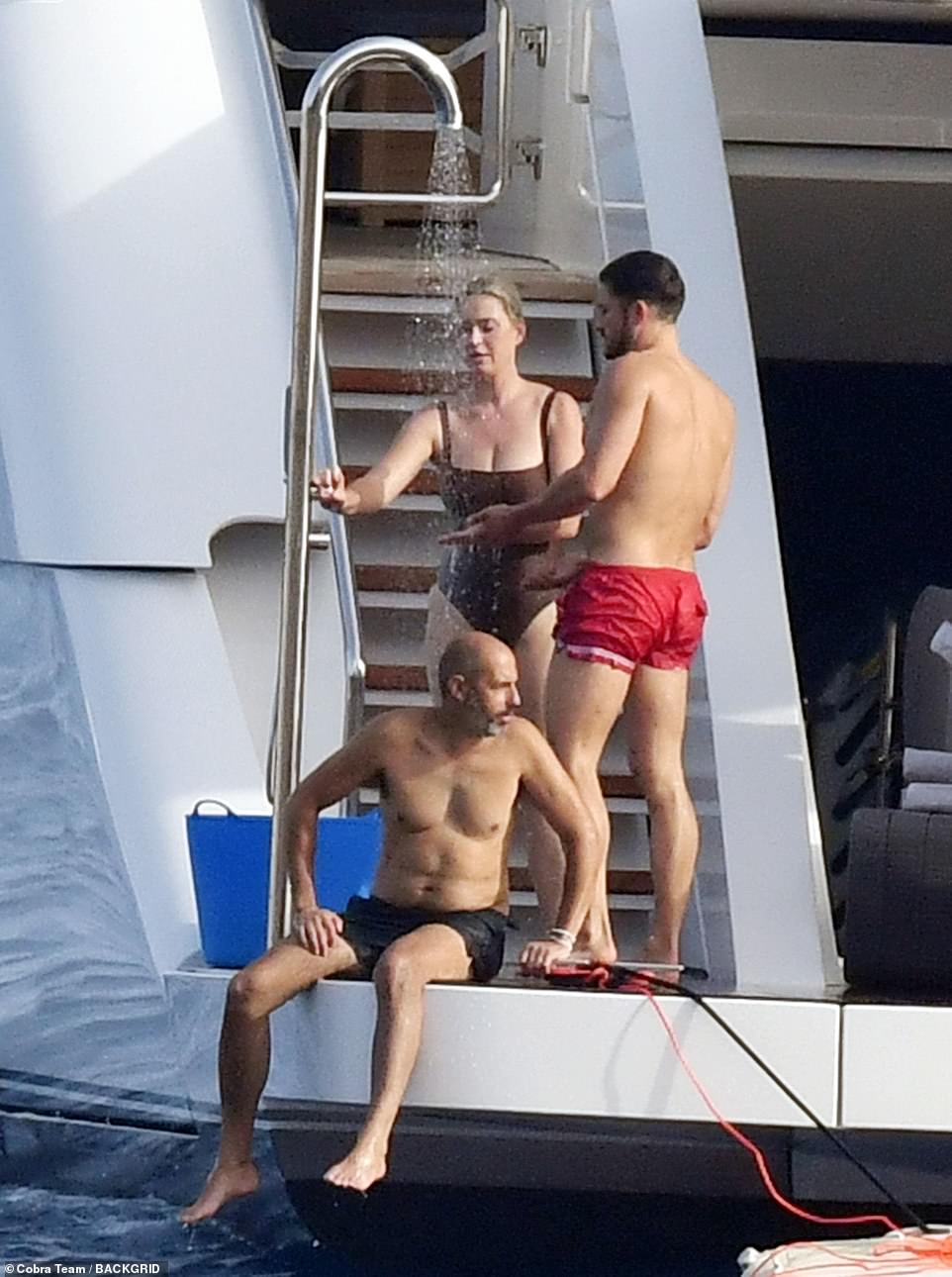 Shower time: The happy couple showered off after their dip 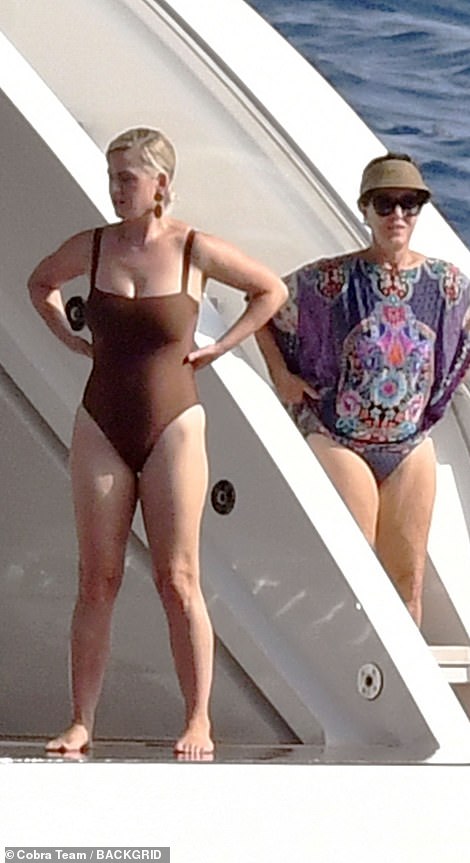 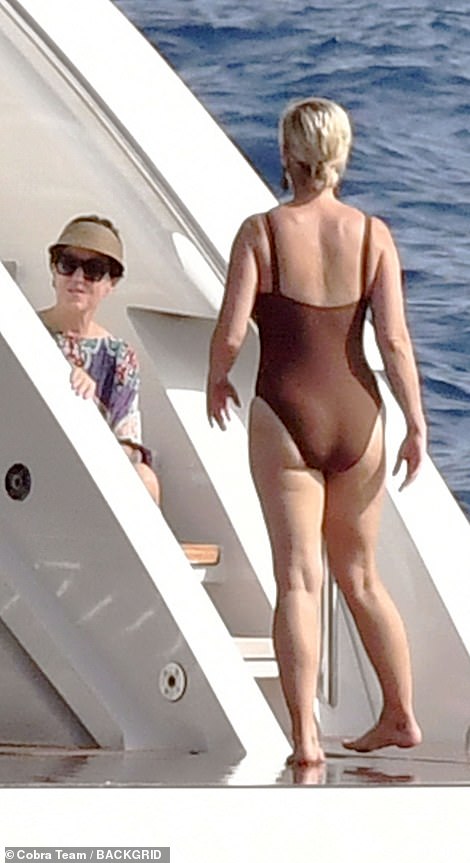 Sun protection: One of Katy and Orlando’s friends made sure to protect from the sun in sunglasses and a hat 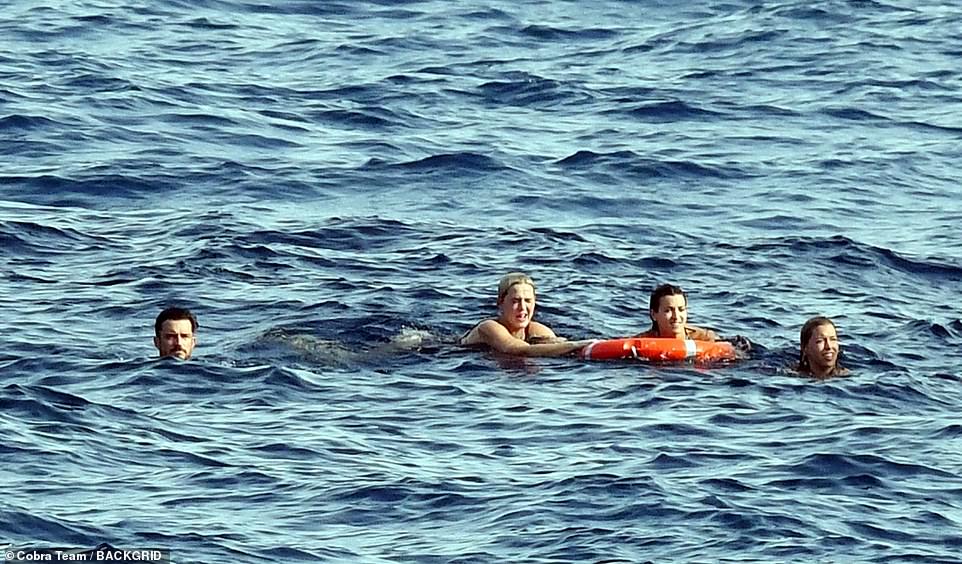 Heaps of fun: Katy, Orlando and their friends had a blast while splashing about