‘Picked up and DUMPED’: Brutal moment a women’s rugby league player is SMASHED in a huge tackle

‘Picked up and DUMPED’: Brutal moment a women’s rugby league player is SMASHED in a huge tackle

An women’s rugby player has been smashed in a brutal tackle during the NRL Nines tournament.

The big hit came in the second half of the Sydney Roosters clash with the Brisbane Broncos during day two of NRL Nines at HBF Park in Perth on Saturday.

Courtney Hill – a former Big Bash cricketer – grabbed her opponent by the waist as she attempted to side-step past.

Hill lifted the ball-carrier into the air and then slammed her onto her back, where she was briefly held on the grass.

‘Picked up and dumped,’ one of the commentators could be heard saying after the explosive tackle.

Hill was praised for her bone-crunching manoeuvre, with many fans arguing she deserving of more game time.

‘How good is this hit! Great player Courtney killed it in Super League too, would’ve loved seeing her get more field time,’ one said.

‘They didn’t give her enough game time, she’s way more creative than her teammates,’ added another.

A third viewer said: ‘Woah. I’m clutching my own ribs after that.’

Despite the impressive tackle, the Roosters struggled to find the same power across the field and succumbed to the Broncos 16-0. 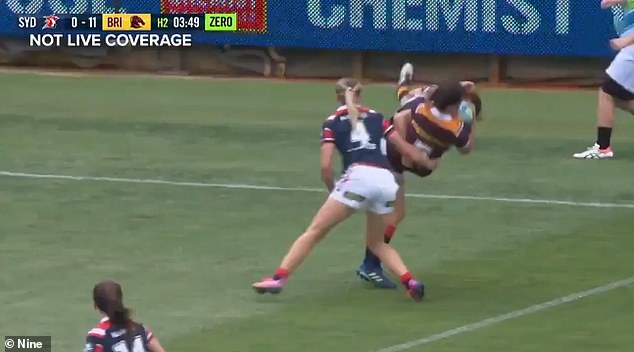