PICTURE EXCLUSIVE: John Barrowman is seen for the first time since Dancing On Ice axe

John Barrowman has been pictured for the first time since it was announced he would not return for the new series on Dancing On Ice.

The actor, 54, was picked up by his husband Scott Gill from Palm Springs airport on Sunday.

It comes as ITV revealed John will not form part of the judging panel for the upcoming series, five months after he apologised for exposing himself on Doctor Who sets in historic incidents.

Picture Exclusive: John Barrowman has been pictured for the first time since it was announced he would not return for the new series on Dancing On Ice

Despite being axed from the show, John appeared in high spirits as he loaded bags into the boot of his husband Scott’s dark blue Tesla.

The television personality, who joined Dancing On Ice last year and appeared in two seasons, previously admitted to ‘tomfoolery’ on the sets of Doctor Who. 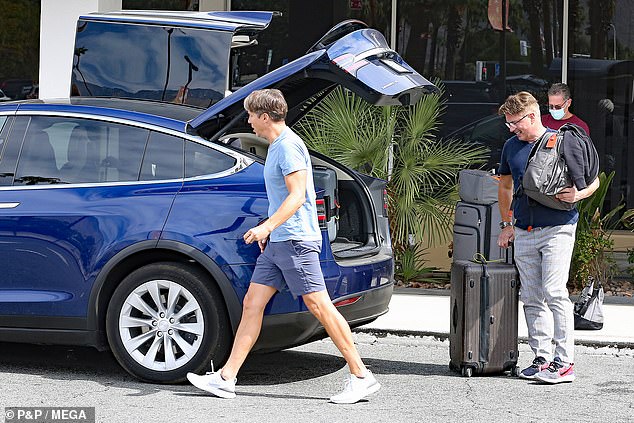 Jet-setter: The actor, 54, was picked up by his husband Scott Gill from Palm Springs airport on Sunday 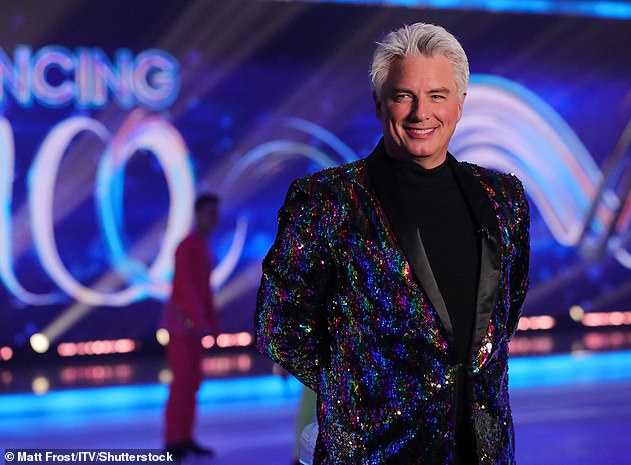 Axe: It comes as ITV revealed John be on the judging panel for the new series, five months after he apologised for exposing himself on Doctor Who sets  (pictured in January 2021)

Of the axing, a source told The Sun: ‘This will be devastating for him. Clearly ITV feel it’s not a good look to have someone like John centre-stage on a family­-friendly show.’

An ITV spokesperson told MailOnline John will not return to the dancing show but will be seen on the channel again when he returns to host All Star Musicals.

Representatives for the channel said: ‘We thank John Barrowman for two brilliant years on the Dancing on Ice panel and are pleased to be working with him again as host of the forthcoming All Star Musicals specials.’

A show insider added ‘John has not been “sacked” from Dancing on Ice and we continue to work with him at ITV’.

John’s team said: ‘John is thrilled to be returning to work for ITV as host on the new All Star Musicals’ but declined to comment on his departure from the skating show.’

Former Strictly judge Arlene Phillips, 78, has been tipped to be his replacement. 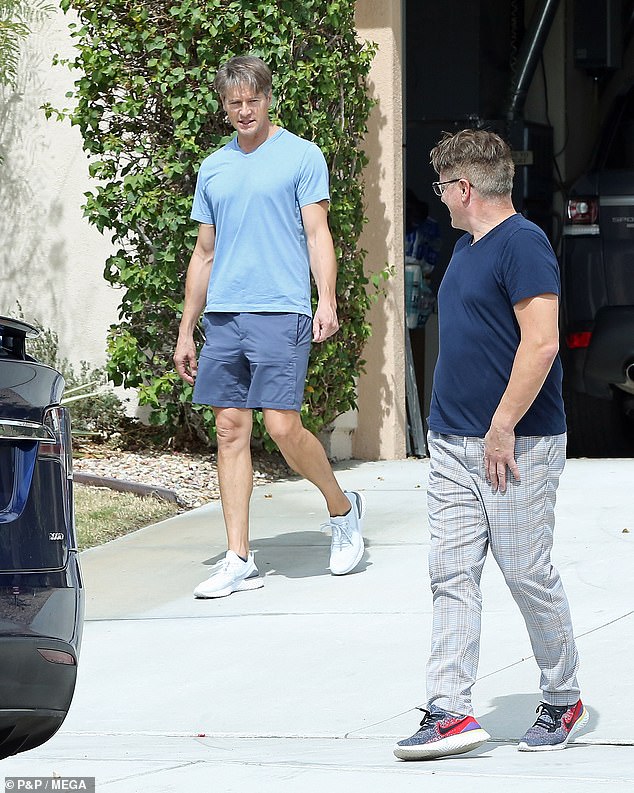 Brushing it off: Despite being axed from the show, John appeared in high spirits as he loaded bags into the boot of his husband Scott’s dark blue Tesla 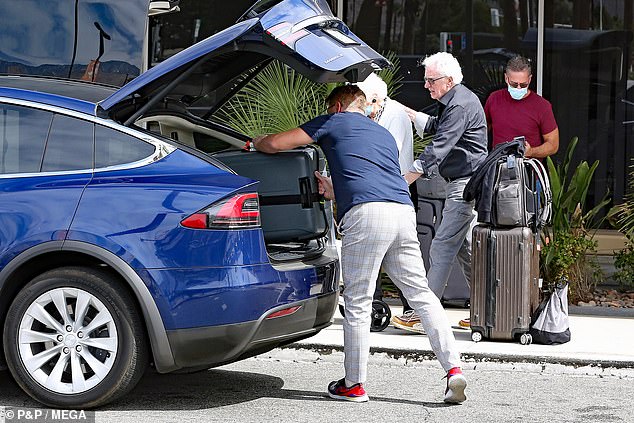 Packing up: John put his suitcases in the boot of the car

No charges were brought against the media personality after allegations about him exposing himself were revealed in May following more serious allegations of sexual harassment against his Doctor Who co-star Noel Clarke.

The incidents came to light in a resurfaced video on YouTube from 2014 and filmed at sci-fi convention, Chicago Tardis.

It was released by The Guardian newspaper which had investigated Clarke’s behaviour on the Doctor Who set. 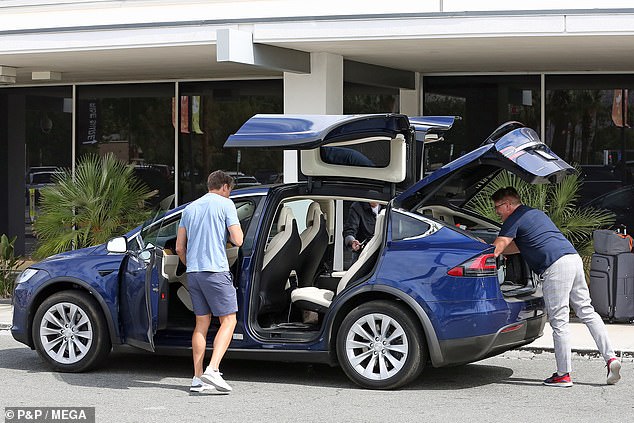 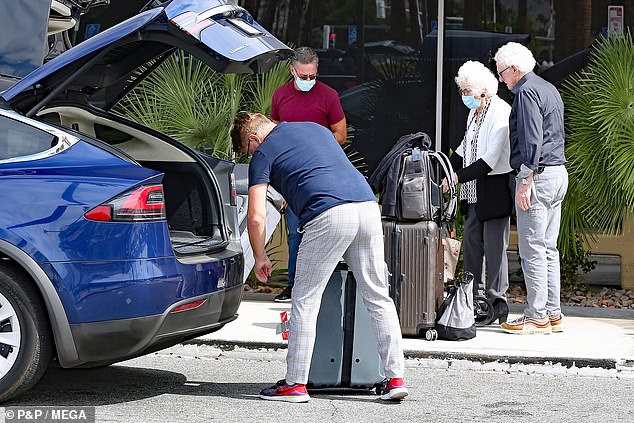 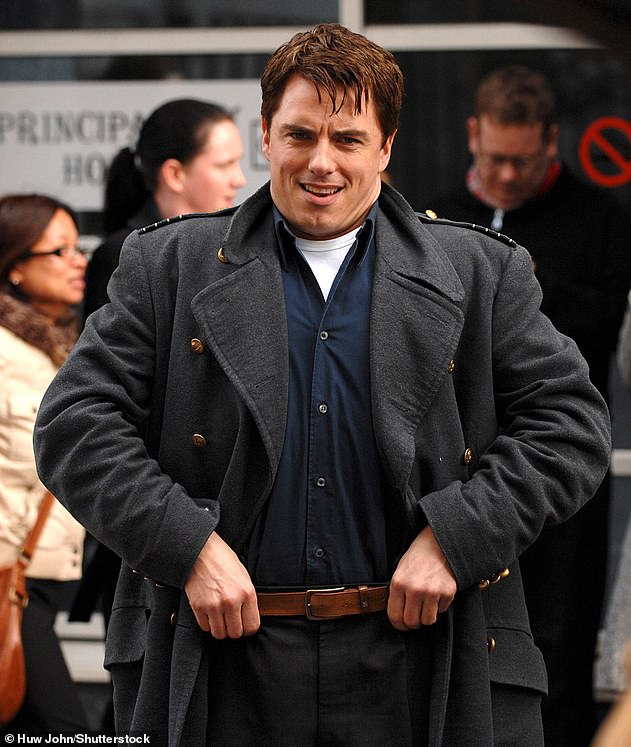 Explanation: John said his ‘high-spirited behaviour’ was ‘only ever intended in good humour’ to entertain colleagues on set and backstage – and not sexual harassment (pictured filming Doctor Who in 2007)

In an interview in front of a live audience, Clarke is seen regaling fellow cast members Annette Badland and Camille Coduri with tales of John’s behaviour on the set of Doctor Who, exposing himself ‘every five seconds’.

Clarke then joked with the audience not to do this at their workplace or they might go to prison in the shocking unearthed clip.

Clarke apologised ‘deeply’ for his actions and said he will be seeking professional help, but has ‘vehemently’ denied sexual misconduct or criminal behaviour.

In an interview with Weekend magazine, John said his behaviour on set was to ‘defuse awkwardness’ whenever he was filming a sex scene in Torchwood.

He said: ‘As Captain Jack Harkness I was the star of Torchwood, so I felt it was down to me to lead the company and keep them entertained. When I was doing a nude scene or a love scene it was clear in the script I’d be naked and everyone would have known about that at least 48 hours in advance.

‘So I’d be waiting in my trailer wearing just a robe with a sock over my “parts”. Then, if I were standing waiting to film a scene where I needed to be nude and someone came into view, I’d make a joke to put them and myself at ease. 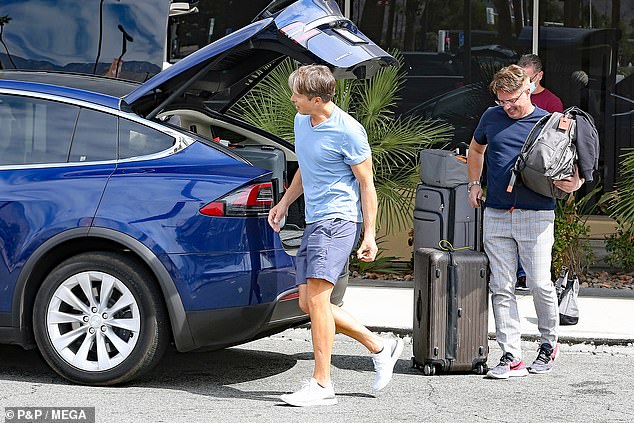 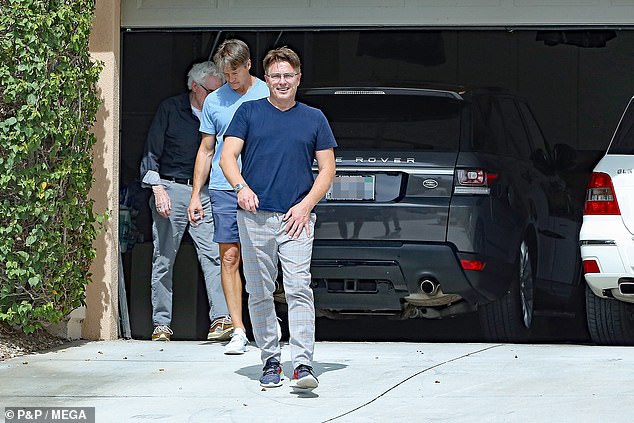 ‘My actions were simply designed to defuse any potential awkwardness among the cast and crew.’

He added: ‘I’ve never been someone who’s embarrassed about his body so it didn’t bother me if anyone saw me naked. The motivation for what I’d call my “tomfoolery” was to maintain a jokey atmosphere. There was absolutely nothing sexual about my actions and nor have I ever been accused of that.’

John revealed he was called for a meeting with Doctor Who and Torchwood executive producer Julie Gardner who told him to reign in his behaviour.

The actor added he can now see his behaviour was ‘juvenile’ and it would not be something he would do today.

It comes after John told The Guardian his ‘high-spirited behaviour’ was ‘only ever intended in good humour’ to entertain colleagues on set and backstage – and not sexual harassment as he apologised for his past behaviour.

‘With the benefit of hindsight, I understand that upset may have been caused by my exuberant behaviour and I have apologised for this previously,’ he said. ‘Since my apology in November 2008, my understanding and behaviour have also changed.’ 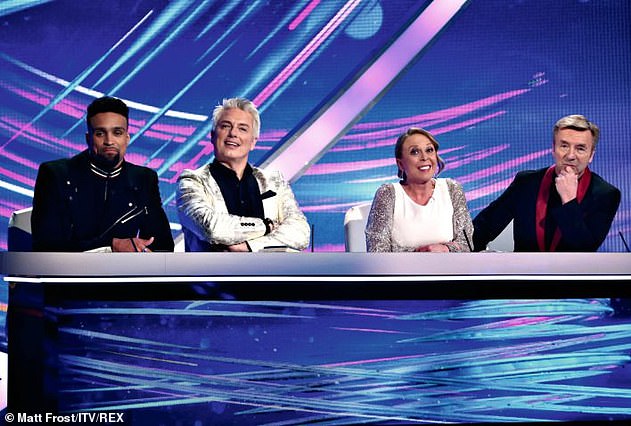 He won’t be back: John appeared on the judging panel alongside Ashley Banjo, Jayne Torvill and Christopher Dean (pictured February 2020)