Amid mounting criticism of his handling of the crisis, the Home Secretary announced he was taking personal control of borders.

However he is still on holiday with his family in South Africa – 6,000 miles away. Aides refused to say whether he would curtail his Christmas break.

Following a conference call with police and senior officials, Mr Javid appointed a ‘gold commander’ to oversee the response and asked for talks with his French counterpart. In other developments:

The Home Secretary resisted pressure from Conservative MPs to reinforce Border Force operations in the Channel, where only one cutter is on patrol; 12 more migrants were rescued from boats off the English coast and taken to Dover yesterday; It emerged that 121 have tried to cross since December 23 – 90 of them reaching Britain.

Politicians from all parties lined up to criticise Mr Javid’s handling of the migrant crisis yesterday as he faced accusations of sleeping on the job’. Ed Davey, Lib Dem home affairs spokesman, said: ‘It is time the Home Secretary stopped sleeping on the job and woke up to the reality of what is happening at our borders.’

A ministerial source said Mr Javid must ‘get a grip on the situation’ while Tory MP Charlie Elphicke, who represents Dover, said the Home Office had not taken the issue seriously enough. ‘The crisis has continued to escalate to unprecedented levels,’ he said. 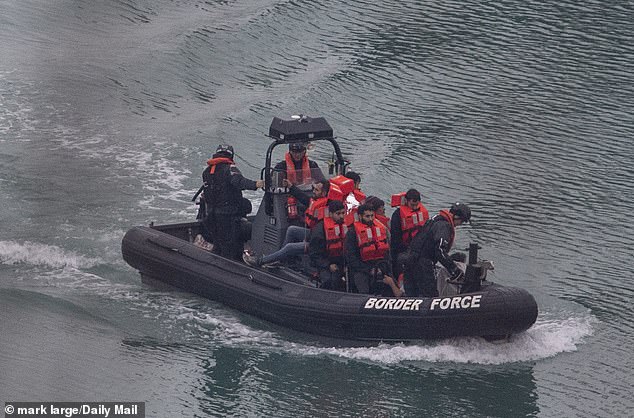 He welcomed Mr Javid’s intervention but added: ‘We need a clear strategy to defeat the traffickers. Let’s start by bringing back our cutters to the English Channel.’

It is not the first time Mr Javid has faced criticism for being absent during political crises. Last year, as communities secretary, he came under fire for staying on holiday amid uproar over a planned increase in business rates.

A year earlier he was forced to return from a trip to Australia when the future of the Port Talbot steel works was in the balance.

The Home Office released a detailed statement yesterday outlining the steps Mr Javid is taking after the conference call with officials in Border Force, Immigration Enforcement and the National Crime Agency. 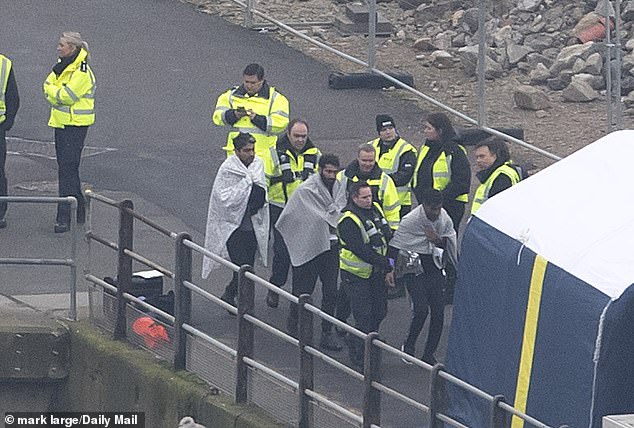 Mr Javid is thought to be resisting pressure to deploy one of the Border Force’s four other cutters because it could encourage more migrants to make the crossing in the hope they would be picked up. Another Tory backbencher, Damian Collins, who represents Folkestone, called for a closer watch to be kept on small vessels leaving the French coast. He said: ‘If we spotted them when they were closer to the French coast, under maritime law they should be returned to the nearest safe port.’

‘For families and children to end up in small boats in the Channel in the middle of winter is incredibly dangerous. There is a real risk of tragedy if urgent action isn’t taken.’

The most senior politician in northern France yesterday called on Britain to provide a permanent maritime surveillance brigade.

Xavier Bertrand, president of the Hauts-de-France regional council, said the British should stop leaving all the work to the French. ‘When will there be proper surveillance of the Channel?’ he demanded. ‘When will truly firm action be taken against people smugglers on the British side?’

Around 150 migrants are living in squalid conditions on an industrial estate close to the Calais ferry port. The makeshift camp is being raided by police at least every two days. Hundreds more migrants live in small camps dotted nearby.

One Iranian, who gave his name as Tariq, said: ‘We know how dangerous it is to go out in a boat. But we would rather die at sea then stay here any longer.

‘Times are hard, the nights are freezing and getting colder and French police are destroying our homes. They don’t care about us. This is all we have – anything is better than this.

‘I have tried getting on to a boat before. One time I got a boat but tried to fill it up with petrol which spilled on my body and burnt me.

‘It’s hard to get on the ferry now because the police dogs will catch you, so smaller boats are the better option. But you need a lot of money to pay the people smugglers.’

In the first incident yesterday, three Iranian men and a Syrian were found in the early hours in a rigid inflatable boat off the coast of Dover. And at 9am eight Iranian men were rescued from another small vessel and taken to the same port to be processed.