PICTURED: College student, 20, who was one of two victims of Baltimore gas explosion

A 20-year-old college student has been identified as the second victim who was killed in the Baltimore gas explosion on Monday.

Joseph Graham Jr, who was a student at Morgan State University, a historically black university in Baltimore, was identified by family members as being the second victim pulled from the rubble early Tuesday morning.

According to the Baltimore Sun, Graham’s uncle, Isaac, said that his nephew had attended a party with one of his best friends on Sunday and decided to spend the night at a home on Labyrinth Road.

That home was one of three residences that were completely flattened during the blast, which sparked a massive rescue operation that involved bringing in more than 200 emergency personnel in a desperate search for survivors.

The explosion occurred just before 10am Monday morning and caused severe damage to other home on the block.

Graham’s uncle described him as a ‘good kid’ who was a rising junior at Morgan State.

Joseph Graham Jr, who was a student at Morgan State University, a historically black university in Baltimore, was identified by family members as being the second victim pulled from the rubble early Tuesday morning 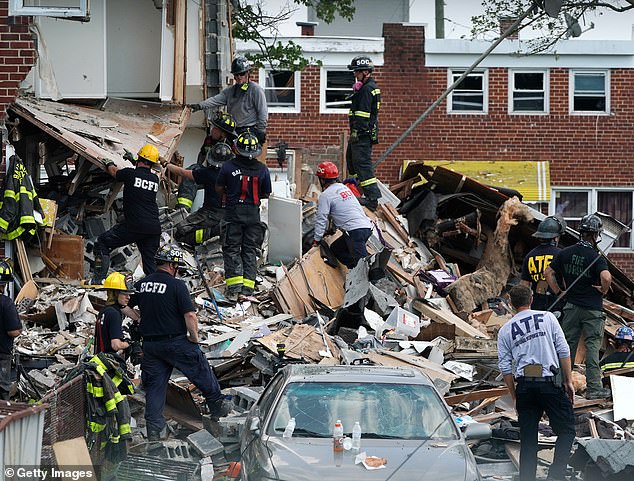 Rescuers pulled Graham’s body from the rubble just before 1am Tuesday morning, bringing the death toll to two

Maryland Gov Larry Hogan tweeted about Graham’s death on Tuesday: ‘We are deeply saddened that another Marylander lost his life in yesterday’s horrific explosion in northwest Baltimore’

He had also recently launched his own clothing line called Chase a Plate and was a YouTuber who had more than 7,000 subscribers.

Graham’s friend, Ty’lor Schnella, said he was always smiling, and was always the happy one among their group of friends at Baltimore City College high school.

Schnella told the Baltimore Sun that Graham ‘was always the one that kept everyone uplifted, kept your spirits high’.

Maryland Gov Larry Hogan tweeted about Graham’s death on Tuesday: ‘We are deeply saddened that another Marylander lost his life in yesterday’s horrific explosion in northwest Baltimore.

‘We continue to pray for the families of the victims and for all those injured and displaced by this terrible tragedy.’

Rescuers pulled Graham’s body from the rubble just before 1am Tuesday morning, bringing the death toll to two.

One woman was found dead and seven were seriously injured in the hours after the gas explosion that rocked the neighborhood at Labyrinth and Reisterstown Road.

Authorities have not publicly identified Graham or the second victim. 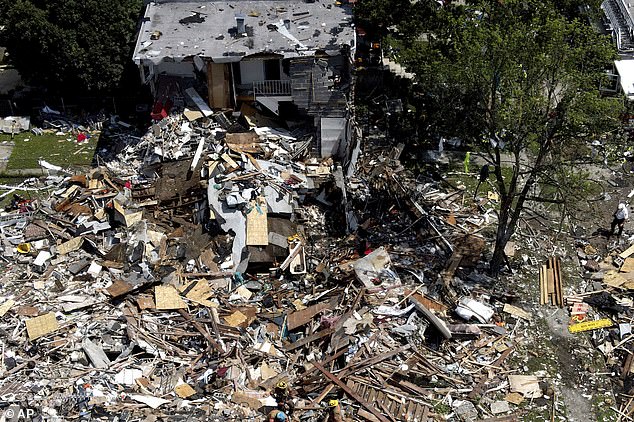 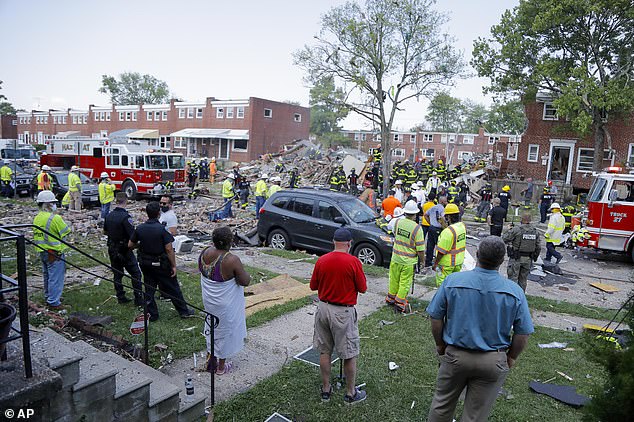 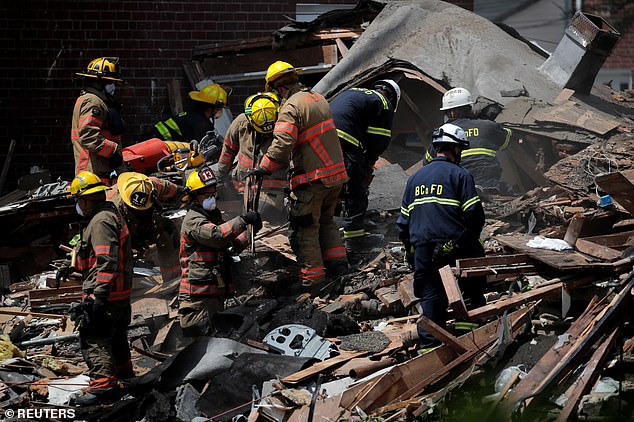 Emergency responders pictured combing through the rubble of the three homes to look for survivors Monday. One woman was found dead and seven seriously injured in the hours after the gas explosion that rocked the neighborhood at Labyrinth and Reisterstown Road Monday morning – and the body of another victim was found early Tuesday 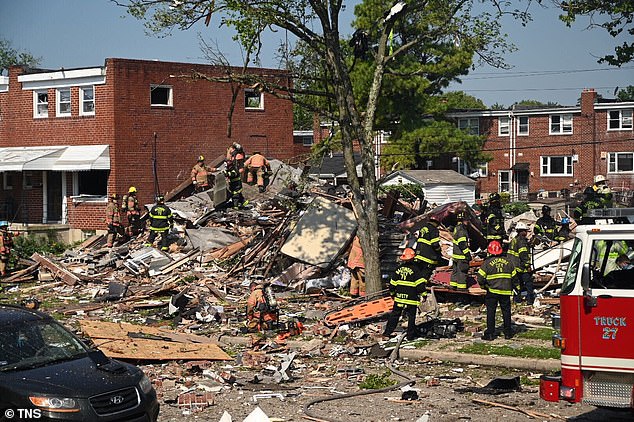 The shock blast ripped through and completely flattened three row homes, sparking a massive rescue operation that involved drafting in more than 200 emergency personnel in a desperate search for survivors

Fire Department spokesperson Blair Adams said at a press conference Tuesday morning that there are no other reports of missing persons.

‘This was a really tough time for the community, for the residents of this neighborhood and the fire department.’

Of the seven surviving victims, five remain in a critical condition at local hospitals, she said.

The ages and genders of the seven people who have been hospitalized have not been released.

Graham’s aunt Sunshine Evans told ABC 2 WMAR Baltimore that her nephew was one of three relatives who had been inside one of the collapsed homes.

The other two – her other nephew Damon Evans and his mother – had been rescued and taken to a hospital, she said.

Horrifying images of the aftermath showed bricks and rubble were all that remained where the homes once stood.

The windows in more than a dozen nearby properties were blown out from the force of the explosion and residents reported hearing the blast several blocks away.

Initial reports said five people, including children, were trapped under the flattened homes. 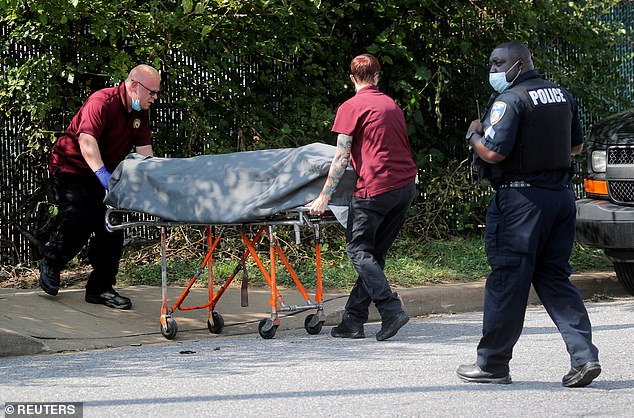 Health workers transport a body at the scene of the blast Monday. Fire Department spokesperson Blair Adams said at a press conference Tuesday morning there are no other reports of missing persons 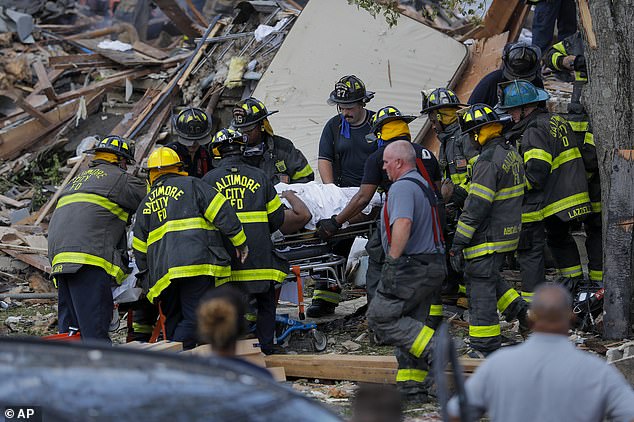 Firefighters transport an injured person on a stretcher at the scene of the explosion in the residential area Monday. It is now a recovery – not a rescue – mission, officials said Tuesday 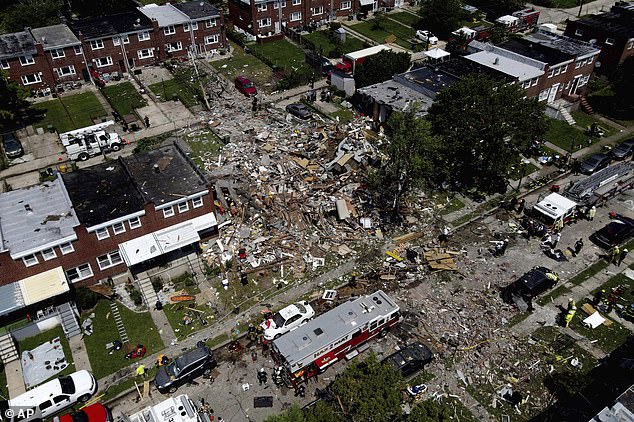 More than 200 emergency responders combed the scene for survivors throughout the day, finding four other survivors during the intense mission and Graham’s body early Tuesday.

At one point, firefighters were seen using a chainsaw to cut through the roof of a collapsed building and search dogs were brought in to look for signs of life.

One eyewitness Kevin Matthews, who has lived on Labyrinth Road for 28 years, told the Chicago Tribune that he rushed to the scene of the explosion and could hear the cries of children trapped under the homes.

‘Come get us! We’re stuck!’ he heard children screaming from the rubble before the emergency services arrived.

He said he ran from his home barefoot after hearing the blast and could smell gas and smoke. 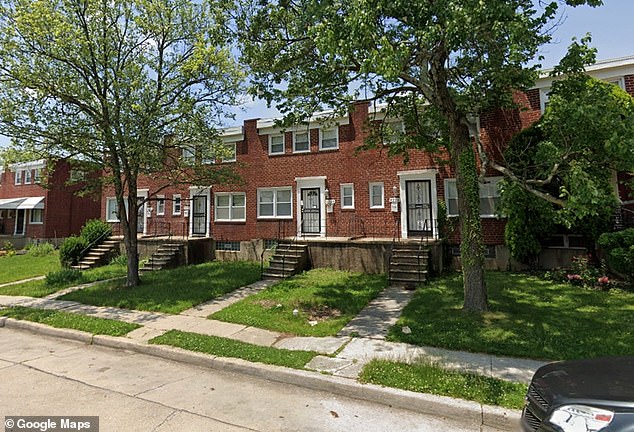 ‘It was like watching that in real life. Telephone poles split, I mean, houses down the block, broken glass.

‘When I initially got there, I could hear a voice just saying help. It’s crazy. It’s something I don’t ever wanna see ever again – I don’t want to relive it ever again.’

Another survivor Major Watkins Jr, an 88-year-old army veteran whose home was completely destroyed in the explosion, told The Baltimore Sun the blast ‘sounded like Korea’.

Around 30 residents were given temporarily shelter Monday night and would not be able to return to their homes Tuesday, amid fears the neighboring properties could also be in danger of collapse.

Nearly 200 people in the surrounding area were affected by the explosion.

An investigation into the cause of the blast is ongoing. Baltimore Fire confirmed it was a gas explosion Monday but the details remain unclear. 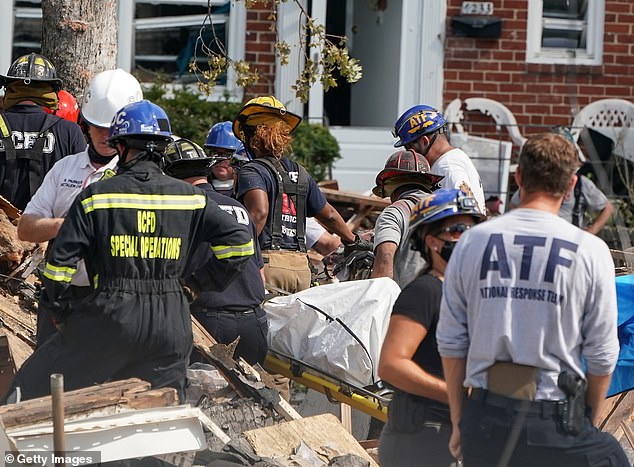 The identities of the two people killed have not been released, but they have been confirmed as an adult male and adult female

Baltimore Gas and Electric reported that no gas leaks have been found on Labyrinth Road or any surrounding buildings.

The gas system infrastructure in the area dates back to the early 1960s, and BGE asked the Maryland Public Service Commission in 2018 to approve a new infrastructure and a cost recovery mechanism to pay for upgrades needed to close the system’s many leaks.

‘Founded in 1816, BGE is the oldest gas distribution company in the nation. Like many older gas systems, a larger portion of its gas main and services infrastructure consists of cast iron and bare steel – materials that are obsolete and susceptible to failure with age,’ BGE said at the time.

The blast comes after a series of other gas leaks in Maryland in recent years amid ongoing complaints that the infrastructure is in need of repair.

Last year, a gas explosion ripped the front off an office complex in Columbia, housing more than 20 businesses.

The explosion occurred on a Sunday morning, meaning no one was in the building at the time and there were no victims.