Pictured: Coward Detroit cop who did nothing as ‘hero officer’ was killed

The ‘coward’ Detroit cop who hid in his patrol car a block away as a colleague was shot dead has been pictured as police bosses investigate how he was reinstated to the force after standing by and doing nothing in 2014 when he watched another officer get beaten.

Sergeant Ron Kidd was suspended this week after it emerged he stayed in his patrol car as Rasheen McClain, a 16-year veteran of the police force, was killed in a deadly shooting a block away on Wednesday night.

He may now face criminal charges for not doing anything as McClain and four other cops stormed the home. His excuse, when questioned by police, was that he was waiting in his car in case the suspect ‘ran away’.

Kidd is currently suspended with pay but bosses say they are moving ‘swiftly’ and are under pressure to fire him.

It was the second incident of cowardice in his career.

Police chiefs have revealed that in 2014, he watched and did nothing as a female cop was beaten by a mentally ill inmate in a detention center.

He was fired for the incident but was reinstated after brokering an agreement which saw him take a 65-day suspension instead.

Sergeant Ron Kidd was suspended this week after it emerged he stayed in his patrol car as another officer was shot dead a block away and cries of ‘officer down!’ rang out on his dispatch radio

The agreement had Police Chief James Craig’s signature on it but on Tuesday, he revealed he never signed it personally and said it must have been forged.

Now, the department is investigating who may have signed it on his behalf.

Craig said he knows it was not his own signature because it both didn’t like his and was signed in purple ink, when he only ever uses green ink.

‘I hate to use the word “forged,” because that constitutes a crime,. I would just say that someone signed my name and it was not my signature.

‘I wouldn’t have entered into that kind of deal, and when I looked at the agreement, someone signed my name agreeing to this.

‘Someone scrawled a signature, but that absolutely is not my signature. So I’m trying to find out what happened. 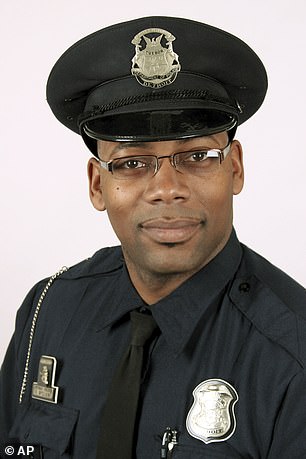 ‘I remember vividly the video of the female officer getting beat up. There’s no way I’d have signed that agreement,’ he said.

The video he referred to was surveillance camera footage of Kidd’s female partner being assaulted by a mentally ill inmate as he did nothing.

They had just arrested the man when he attacked Kidd’s unnamed female partner in a correctional facility.

She struggled against him but Kidd did nothing then walked away without even calling for help let alone intervening, according to the department.

He was meant to be fired for cowardice but instead took a 65-day suspension and came back to work.

Chief Craig now says he does not know he was back on the force until McClain’s death on Wednesday.

Kidd, he said, ‘sat in his scout car a block away while you could hear people screaming “officer down” on the radio.’. 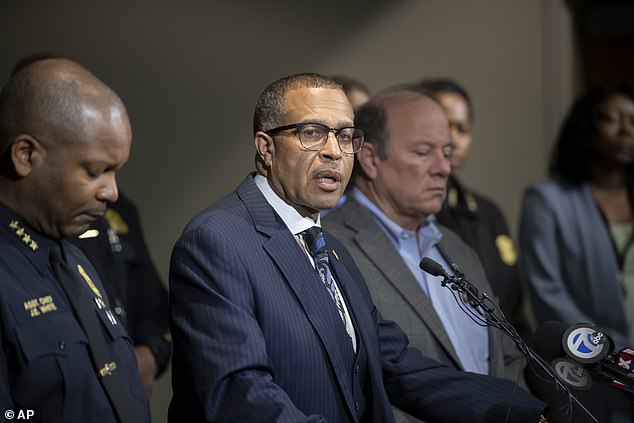 When questioned, he said he decided to stay in his car a block away ‘in case the suspect ran away’.

‘That’s not acceptable when there’s an officer down,’ Chief Craig said.

Unlike Kidd, McClain, he said, was a ‘hero and a leader’.

McClain and his partner, Phillippe Batoum-Bisse, arrived first on the scene at 7:20pm, where they were greeted by ‘frantic’ occupants fleeing from a house where they said a man was armed with a rifle.

The two men summoned for back up, and when two additional officers arrived they all entered the home through the front door.

The 28-year-old man, who has not been named, ambushed McClain in the basement where he had turned all the lights off and lay in wait for them.

‘It was very clear this suspect was trying to bait the officers and had a presence of mind.

‘He wanted suicide by cop.’

He had gone to the house looking for his girlfriend but will not be  named until his arraignment, the police officers said. He has a lengthy criminal record.