PICTURED: Diver who lost his arm when he was struck by a boat in Florida is identified

The young diver who lost his arm and is in critical condition after being struck by a boat in Florida has been identified as 25-year-old Carter Viss.

On Thursday, Viss was just offshore of the Atlantic Ocean in Palm Beach when he was hit by a 2008 36-foot Yellowfin vessel around noon.

A Good Samaritan recovered his severed arm floating in the water near Palm Beach Island and gave it to the US Coast Guard.

Pictured: Carter Viss, 25, has been identified as the young man who was hit by a boat in Palm Beach and lost a limb

‘It’s with heavy hearts that Chuck and I share the news that our son Carter was struck by a boat while diving just off the coast of West Palm Beach, Florida,’ she wrote.

She continued to say that Viss is in critical, yet stable condition and that all of his limbs suffered severe damage from the accident.

This includes extensive injuries to his legs and a broken left wrist.

Leila J. Viss, Viss’ mother, shared a post of Facebook to update loved ones and friends about her son’s current condition 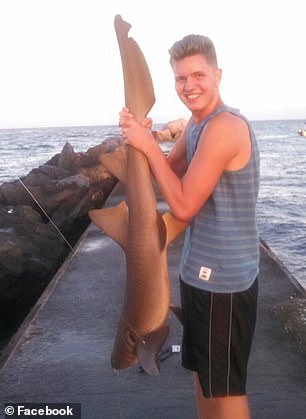 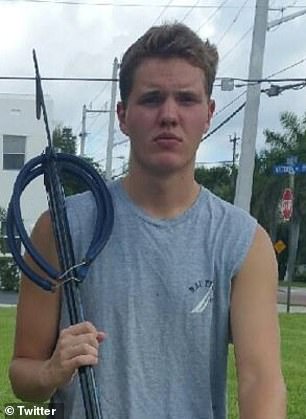 After the incident, Viss was transported to St. Mary’s Medical Center in West Palm Beach, where he is in receiving medical care

Leila said: ‘The enormous grief of our entire family is carried by the prayers and support of the community in Florida and Denver and around the world,’

She gave a special thanks to Loggerhead Marine Life Center, Viss’ place of employment, because, ‘they are the reason he is still with us today.’

According to his Facebook, Viss studied at Palm Beach Atlantic University towards a degree in marine biology and is listed as maintenance technician for Loggerhead Marinelife Center.

Public photos of Viss show him swimming in the ocean, spearfishing and holding marine animals.

On Thanksgiving around 12.40pm, Daniel Stanton, 30, was operating a boat while heading southbound in the Atlantic Ocean near Breakers Hotel, the Florida Fish and Wildlife Commission told The Sun Sentinel.

Stanton spotted designated diving flags and divers, including Viss, in the distance before immediately throttling down the vessel.

Unfortunately, it came into contact with Viss as it was decelerating and caused immediate damage. 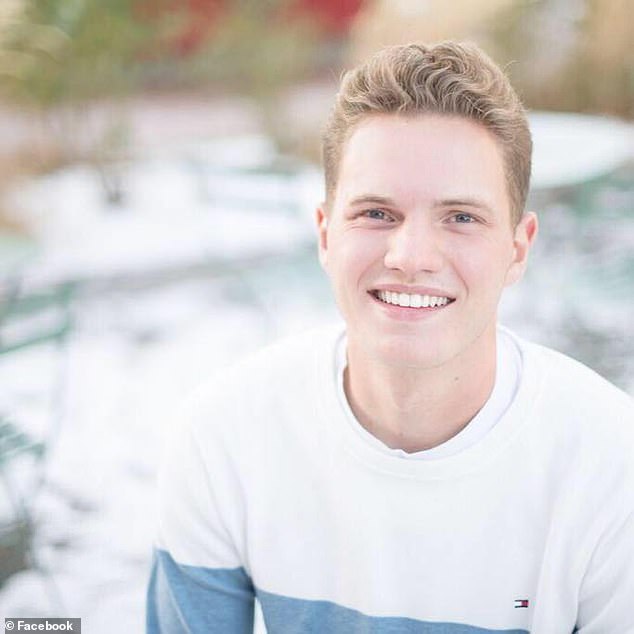 Leila J. Viss: ‘While Carter is sedated we have the luxury of being as weak as we need to be. We know that when Carter is slowly taken off the sedation, we will need to be strong for him’

Samantha Marulli told WPTV: ‘A boat came along and went right over them. When they pulled him out of the water, he didn’t have an arm.’

‘The fireman used a paddle board to go out with a bag to get the arm.’

Marulli further explained that people on the boat helped bring Viss to shore where emergency crews were waiting.

‘Everybody was hugging each other and crying it was a very catastrophic scene,’ she said.

Viss, who was conscious throughout the ordeal, sustained life threatening injuries and was transported to St. Mary’s Medical Center in West Palm Beach.

Viss was being helped by a nearby friend who was diving with him at the time of the incident.

‘Chuck and I are asking why. We take turns losing it, sobbing, and comforting each other,’ Leila wrote in a blog post on Caring Bridge.

‘While Carter is sedated we have the luxury of being as weak as we need to be. We know that when Carter is slowly taken off the sedation, we will need to be strong for him.’