It’s opening in two days’ time and now, finally, Disneyland has revealed a picture of its finished $1billion Star Wars: Galaxy’s Edge attraction, complete with the cast that’ll entertain guests during their visit.

The picture was posted to Instagram by Josh D’Amaro, the president of Disneyland Resort, with the caption: ‘So proud to introduce you to the inhabitants of Batuu! I want to thank this amazing team for their incredible dedication and passion. Yesterday’s Star Wars: Galaxy’s Edge cast rally was unforgettable. This photo is one for the ages!’

He promised that the ‘amazing cast’ are ‘ready to give the fans all around the world the most immersive Star Wars experience!’

The eagerly awaited 14-acre attraction will have rides, shops selling personal droids and lightsabers and ‘Star Wars-appropriate food and drink’.

The California resort is expecting massive crowds when it opens and has revealed detailed plans on how Stormtroopers will help to accommodate guests.

For the first three weeks, guests must have a reservation to enter and will be limited to four hours inside the immersive new land, the largest single-themed land inside a Disney park. 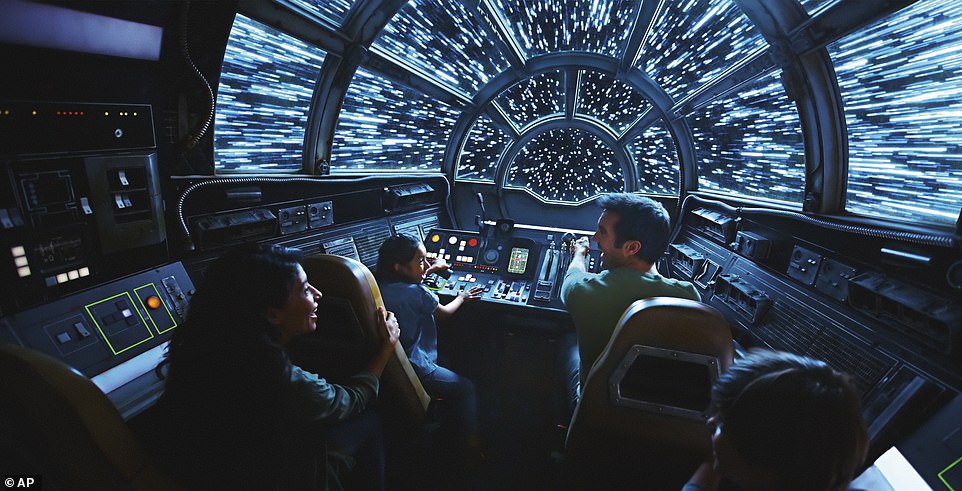 A rendering showing the Millennium Falcon: Smugglers Run attraction where guests can roam the ship’s halls and engage in a dogfight with Tie Fighters 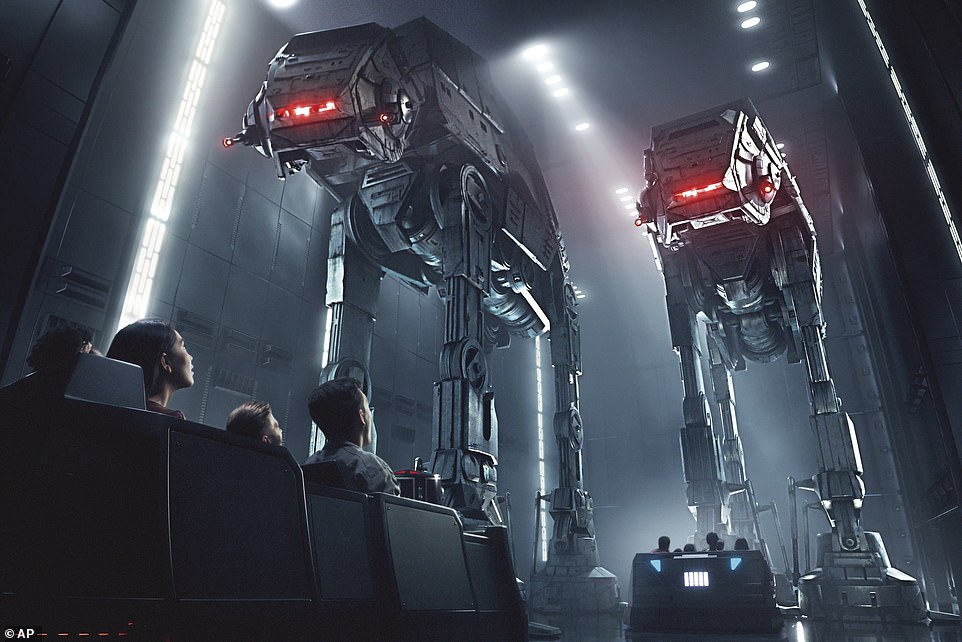 Later in the year, Star Wars: Galaxy’s Edge will open another ride called Star Wars: Rise of the Resistance. Pictured is a rendering of this attraction

A special wristband will identify a visitor’s time window, and once it expires, Disney said it will shut off access to key attractions and merchandise locations.

Park employees dressed as Star Wars characters will ultimately ask visitors to make their way toward one of the three exits so a new group can enter.

Kris Theiler, vice president of Disneyland park, said: ‘There might be some First Order officers out there helping us or maybe some Stormtroopers asking people to move along.

‘We’ll employ the First Order maybe later in the reservation period if we need to.’

The park has plenty of other, more subtle ways to manage crowd flow. Theiler said walkways were widened from three to about six feet in different areas, and stroller parking is available.

Around 7,500 new parking spaces along with new parking lot entrances and toll booths were added. A new pedestrian bridge was also built to help avoid jams.

Disneyland declined to share the capacity limit for Galaxy’s Edge.

Disney has made Galaxy’s Edge look and feel like part of the Star Wars universe. It’s designed as a grungy outpost on a distant planet.

The marquee attraction is a massive replica of the Millennium Falcon, where guests can roam the ship’s halls and engage in a dogfight with Tie Fighters. Another ride called Star Wars: Rise of the Resistance is set to open later in the year.