A nine-year-old boy who died after being struck by lightning on a football field in Blackpool was a fundraising hero who was praised by Liverpool star James Milner.

Locals paid tribute to inspirational Jordan Banks today after he died on the sports pitch on School Road at 5.05pm last night after a storm suddenly hit without warning.

Officers said enquiries are ongoing but it was believed the youngster was hit by a lightning bolt.

Liverpool fan Jordan, played as number 7 for the Clifton Rangers Bees Under 9s side, and was having one-on-one coaching at the time.

His stepfather was watching from the car when the tragedy struck and today a family member sank to his knees and sobbed at the spot where the lad was hit before leaving a bouquet of flowers.

His mother, father, stepfather and other family members hugged each other as they left the tributes left.

A spokesperson for Clifton Rangers JFC said: “Jordan of our U9 Bees, tragically passed away yesterday evening doing what he loved. Jordan was a shining light and an inspiration to everyone that he met.

‘A strong, determined and courageous young man, who will be missed by everyone.

“The world has truly lost an extraordinary young man, who had done so much good in his community.’

Jordan’s best friend CJ Campbell, nine, paid tribute to his pal by leaving a football and flowers. He was travelling home from the Lake District when he heard.

He said: ‘I am very sad about what happened. Jordan was my best friend and I’m going to miss him. I’ve known him since reception class.

‘We played football against each other. He was very funny and caring and had raised money for charity. He was in my class at school.’

Jordan, nine, was a charity hero who raised money for a mental health cause in honour of uncle 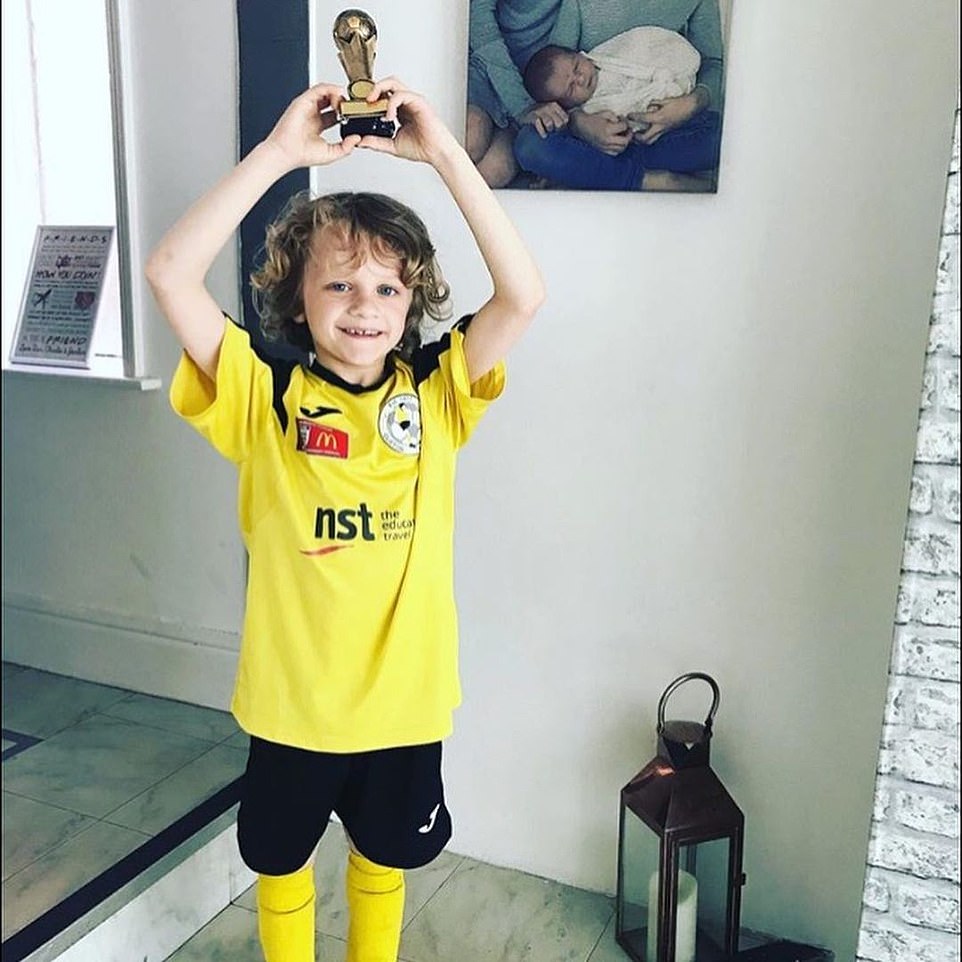 Liverpool fan Jordan, played as number 7 for the Clifton Rangers Bees Under 9s side 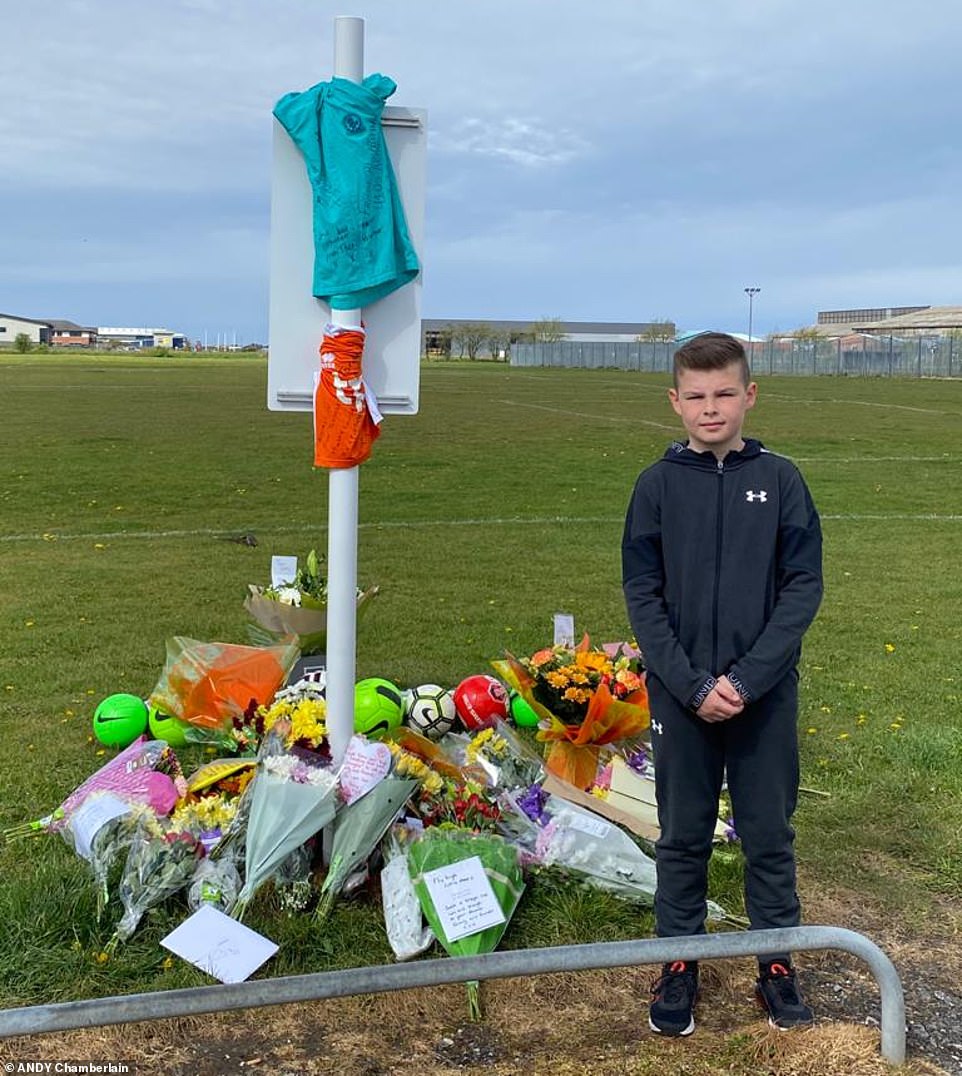 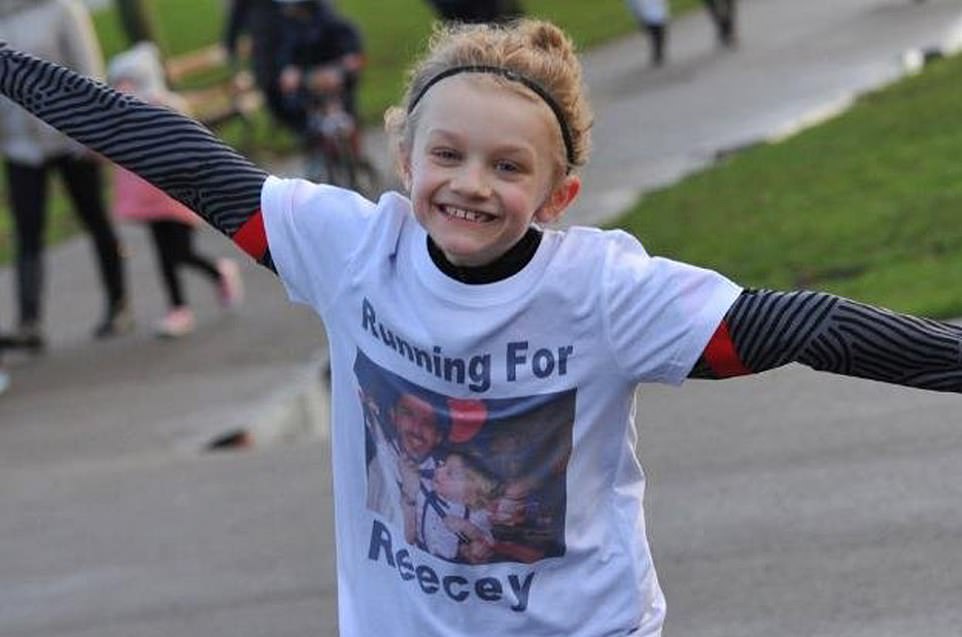 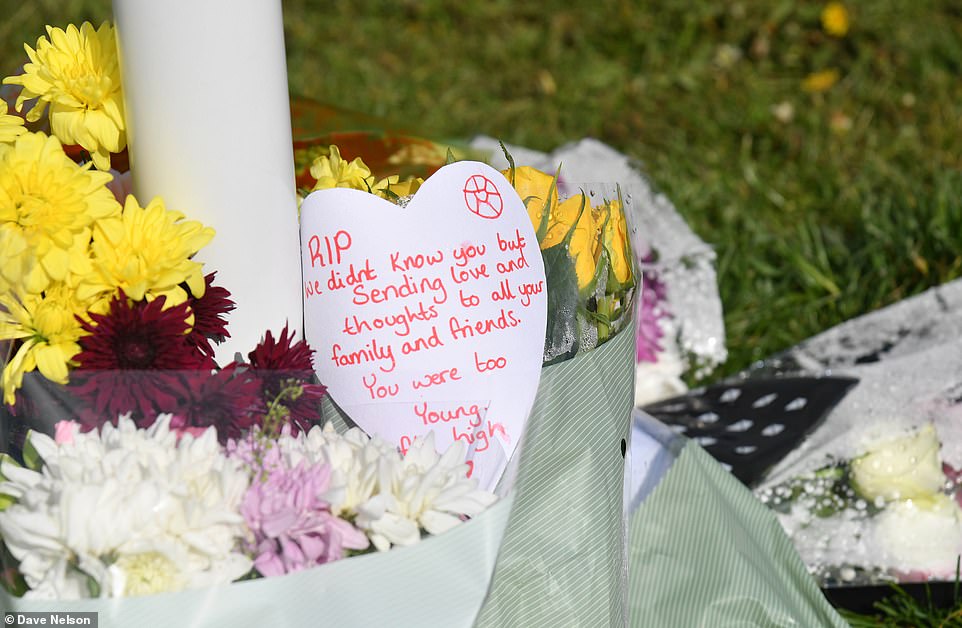 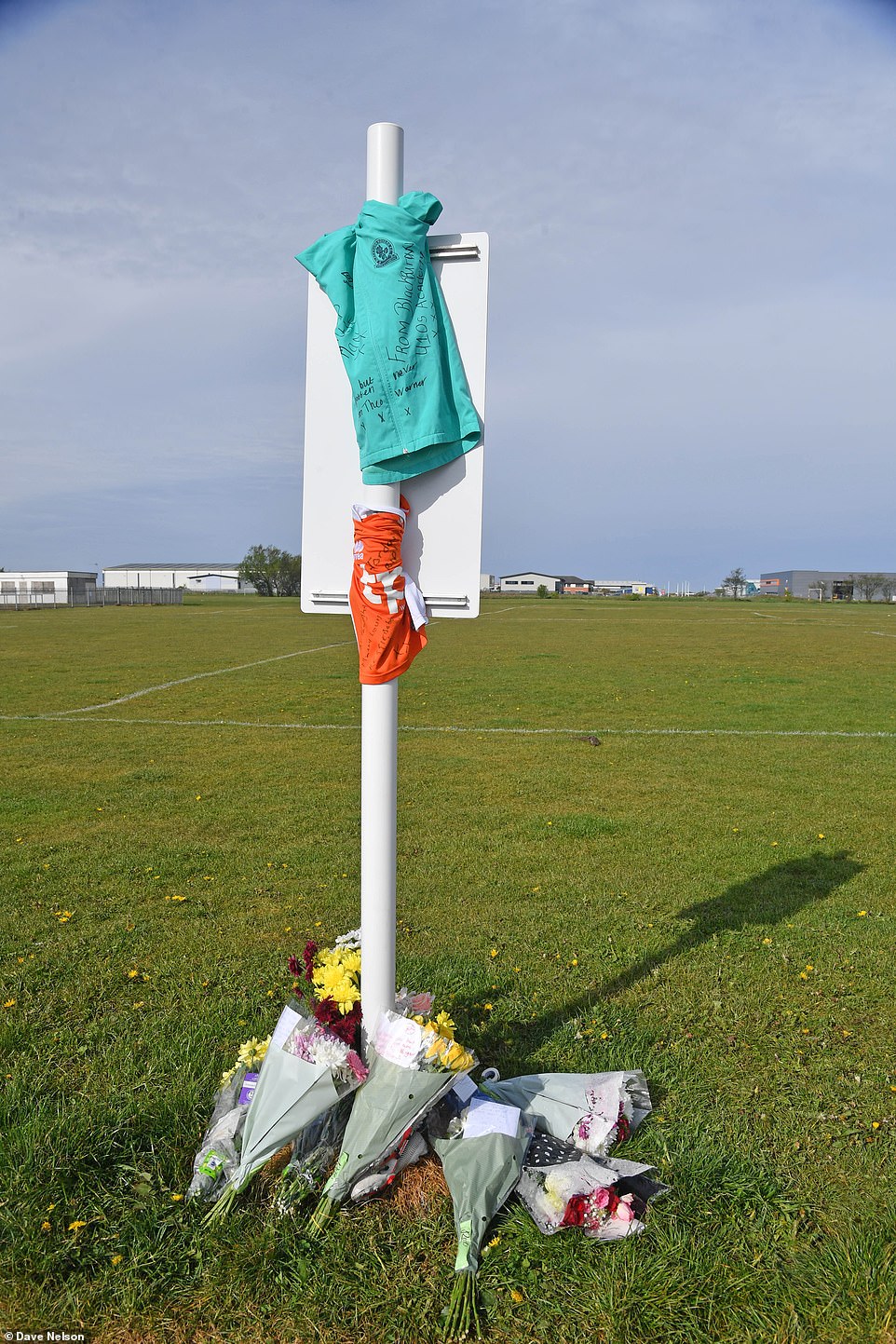 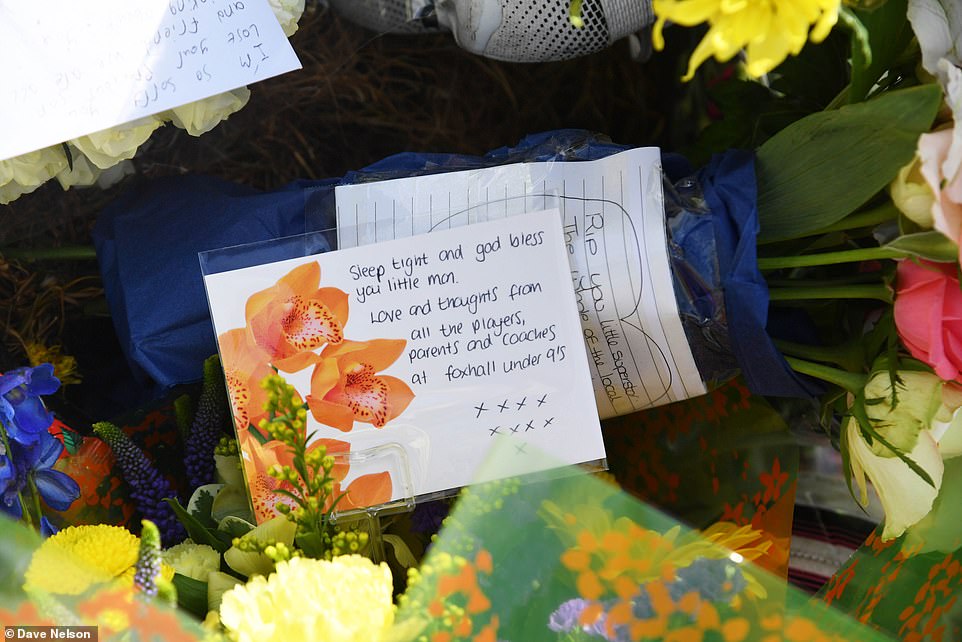 Pictured: One of the hundreds of supportive messages, flowers and tributes left by well wishers at Common Edge playing fields in Blackpool

CJ’s dad, Chris, a landscaper, said: ‘Jordan was having a one-to-one coaching session.

‘His step-dad was in the car at the time. It is awful.

‘He was having a coaching session at the time to help improve his game.

‘I feel so sorry for his family and what they are going through.’

Just months ago Jordan had been hailed a hero by Milner, 35, after he heard he ran 30 miles to raise over £2,500 for a local mental health organization.

The young lad decided to do it in honour of his Uncle Reece, who took his own life in 2018 and would have turned 30 this year.

Milner told him: ‘Hi Jordan, how’s it going? I’ve heard that you’re doing an amazing thing in raising funds for counselling in honour of your uncle Reece. I think running a marathon is an incredible feat, and it’s difficult with people doing it with legs a lot bigger than yours, but to do 30 miles is incredible.

‘I heard you get called Mini-Milner because you’re very determined, so that’s an amazing skill to have. Never ever give up and I hear you’ve been out in all weather fighting in the cold and the rain, so you keep going, and keep doing what you’re doing mate.

‘Just remember you’ll never walk alone. All the boys are behind you and I’ll send you a couple of shirts – one for yourself for doing an amazing thing and another that you can hopefully raise a bit of money from and put it towards all the money you’re raising. Well done bud, it’s an amazing achievement and you should be very proud.’

Jordan was found with serious injuries before being rushed to hospital but he later died.

The boy is believed to have been at a training session at grounds used by Spirit of Youth FC when it happened, but is not a member of the club.

Club secretary Daniel Pack said: ‘Unfortunately, we don’t know much at the moment. We extend our sincerest condolences to the family involved.’

He added: ‘We are all very upset and saddened by this whole thing. The whole club is shocked.’

The club posted: ‘It is with deepest regret that we have to report the news that the young boy who was struck by lightning earlier this evening has sadly passed away. 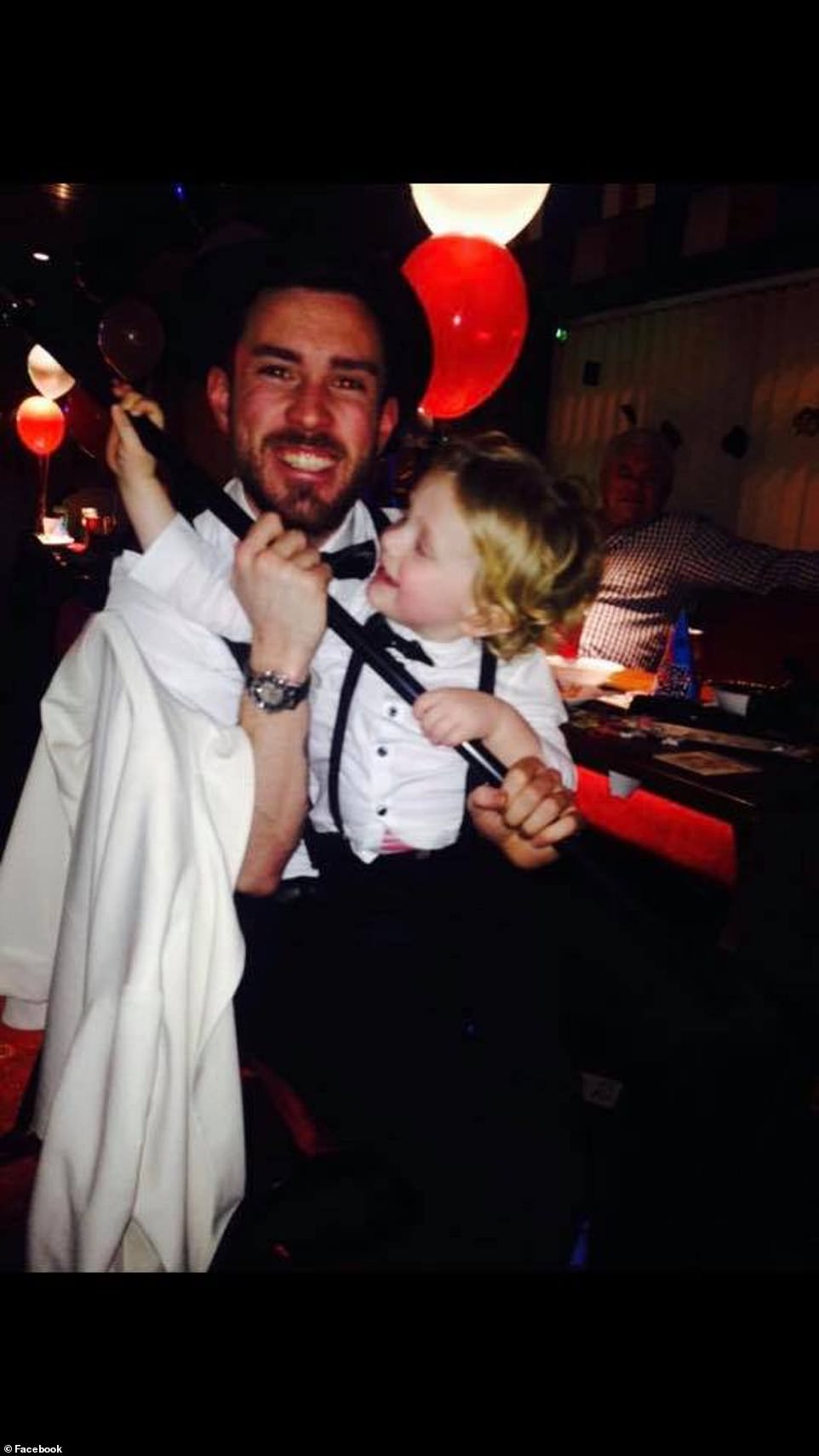 Jordan Banks with his late uncle Reece, who he started his fundraising drive in his memory after he took his own life 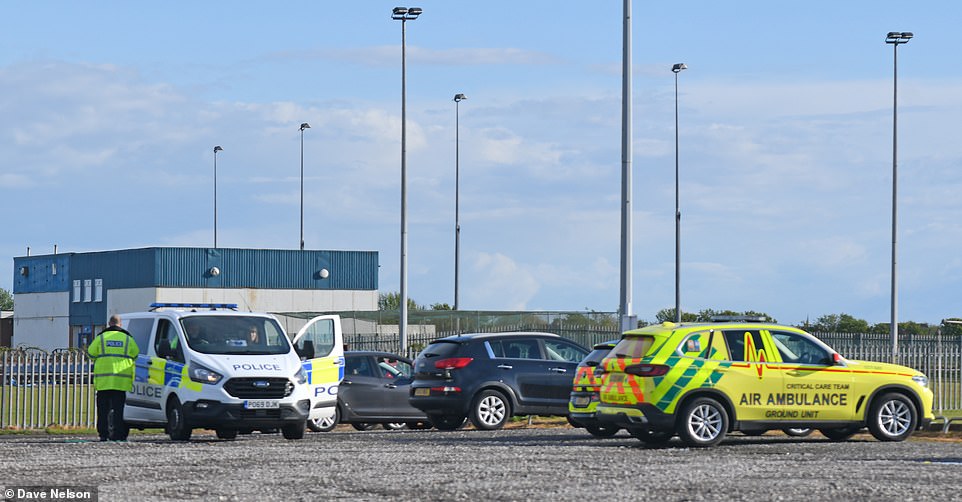 Police were called to the sports pitch on School Road at 5.05pm following reports a child had been injured 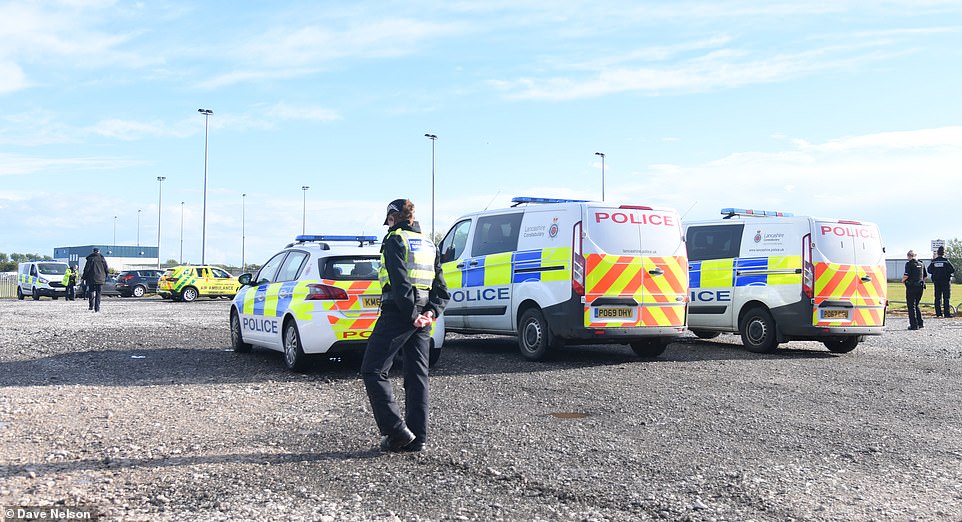 Fatal lightning strikes are exceptionally rare in the UK and account for an average of two deaths a year.

Between 30 and 60 people are hit by lightning every year in the UK, according to figures from the Royal Society for the Prevention of Accidents.

Experts recommend that if the conditions approach, people should take cover inside or in a car with the windows wound up.

If you are in the house all non-essential appliances, including the television, should be unplugged to protect against power surges.

‘The tragic incident happened on our home ground at Common Edge playing fields but it was not during a club training session.

‘As a club, we are heartbroken and we offer our deepest condolences to the boy’s family.

‘Spirit of Youth is a family and we are entrenched in the local community, and we will give whatever support is required to both the family and to those that were with him at the time.

‘We would ask that people respect the privacy of the family at this most tragic of times. Rest In Peace young man.’

Detective Superintendent Nick Connaughton of Lancashire Police said: ‘This is a truly devastating incident and our thoughts are wholeheartedly with the family and friends of the young boy, who has passed away, at this very sad and distressing time.’

A police spokesman said: A nine-year-old boy has sadly died following an incident on a football field shortly after 5.05pm today.

‘Although enquiries are still ongoing, we believe the boy was struck by lightning. Our thoughts are with the boy’s family at this sad time. School Road has reopened.’

Police officers and an air ambulance were seen on the football pitches, shortly after a sudden thunderstorm hit the area.

A rapid response vehicle, an air ambulance van and four police vans were still at the scene around 6.30pm.