Oneil Din, 27, was among a group of three men who got into difficulty while swimming at a beach in Newquay, Cornwall

Tributes have been paid to a holidaymaker who drowned after being caught in a rip tide and swept out to sea at a popular tourist beach.

Oneil Din, 27, was among a group of three men who got into difficulty while swimming at Crantock Beach in Newquay, Cornwall.

Emergency services were sent to the scene around 7.30pm on Tuesday and trio were rescued from the water by two local surfers.

The patients were then airlifted to Treliske Hospital by the Coastguard helicopter but Mr Din was pronounced dead a short time later.

The other two swimmers, aged 17 and 18, remain at Treliske Hospital but are not believed to be seriously injured.

Tributes have since poured in on social media to Mr Din, also known as Kenny, who lived in Coventry and was a budding musician.

‘Kenny was well-known to the Filipino community of Coventry and was an inspiration to a number of our youths. We are all saddened with his untimely demise.

‘He will be remembered as a loving son and brother to us all. Our prayers and thoughts are with you and the whole Din family.’

A post read: ‘We mourn for the untimely demise of our dear brother Kenny Oneil Din who has now gone home to our Father in heaven.

‘You will always be in our hearts whom you have touched. We thank you for your smiles and laughter. 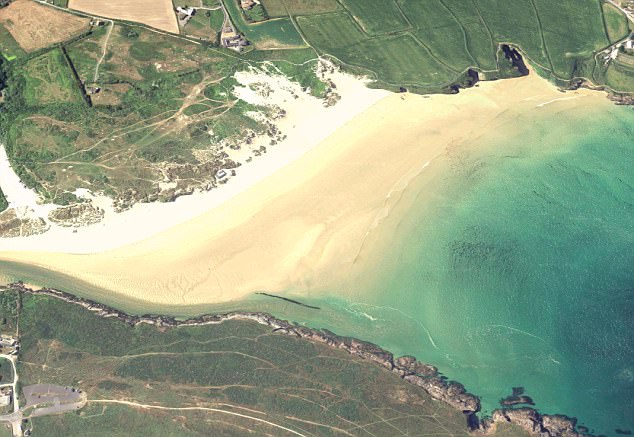 Emergency services were sent to the scene around 7.30pm on Tuesday and trio were rescued from the water off Crantock Beach, pictured, by two local surfers

In one heartfelt message, Maria Rayco said: ‘I’m so lost for words…our deepest condolence and prayers to you and your family.

‘He’s a great boy with an amazing talent and he’ll surely be missed.’

Peter Voicu said: ‘I can’t fathom that he is gone..Surreal..Rip little bro.’

Leigh Hallam, from Newquay, saw the tragedy unfold. He said: ‘I was watching them when they started getting dragged out.

‘Four of them scrambled on the rocks but three of them kept getting dragged out. I called 999 and they kept me on the phone.

‘The paddleboarders and surfers got to them. All three was unresponsive as they got to shore.’

RNLI Lifeguard Supervisor John Steadman said after that incident: ‘Crantock beach has some unpredictable currents at the moment due to the topography of the beach constantly changing.

‘The river is still running across the length of the beach which causes lateral currents at certain stages of the tide.’

Police say his death is not being treated as suspicious and a file has been opened for the coroner.