This is the community champion given a ‘golden ticket’ by Harry and Meghan to see them marry who then sold her free goodie bag on eBay for more than £21,000, MailOnline can reveal today.

Claire Oliver, 31, was one of the 1,200 non-VIPs invited to spend the day outside St George’s Chapel on Saturday and given the enviable chance to see the newlyweds and their famous guests up close.

Miss Oliver, who is from Cambridge but lives in south-east London, works in HR for Troup Bywaters, an engineering group heavily involved in offering apprenticeships to get more young people in work – a cause close to Harry’s heart.

On the day of the wedding she tweeted: ‘I got to watch the royal wedding right outside Windsor Castle in this amazing setting. Such an amazing day #Golden ticket #Royal connections’ and filmed herself twirling with joy in the grounds.

But hours later she had posted her free commemorative gift bag on eBay, which has now sold for £21,400.

The canvas bags inscribed with the couple’s initials contained a souvenir wedding order of service and welcome letter from Meghan and Harry, other freebies included a bottle of Windsor Castle water, a giant chocolate coin, a tin of shortbread and a voucher for 20 per cent off in the castle shop.

Last night MailOnline spoke to Miss Oliver about her auction she said she didn’t want to discuss it and she is among more than 25 other guests who offered their bags to the highest bidder. 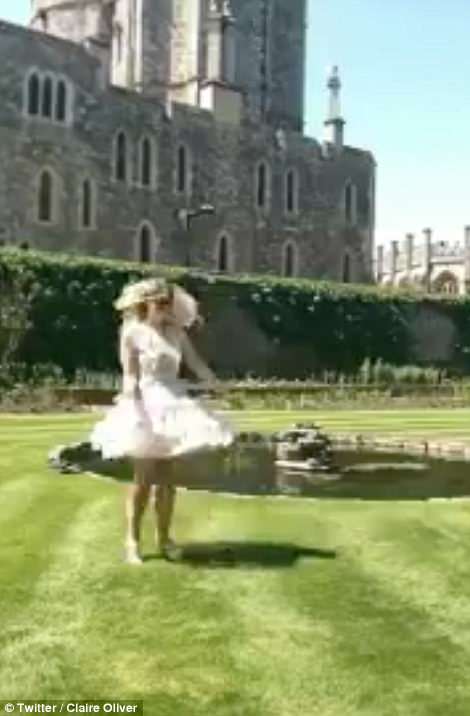 Claire Oliver, 31, (left) was one of the 1,200 non-VIPs invited to spend the day outside St George’s Chapel on Saturday and given the enviable chance to see the newlyweds and their famous guests up close and filmed herself in the grounds of Windsor Castle (right)

Hours after the event she had posted her free commemorative gift bag on eBay , which has now sold for £21,400. 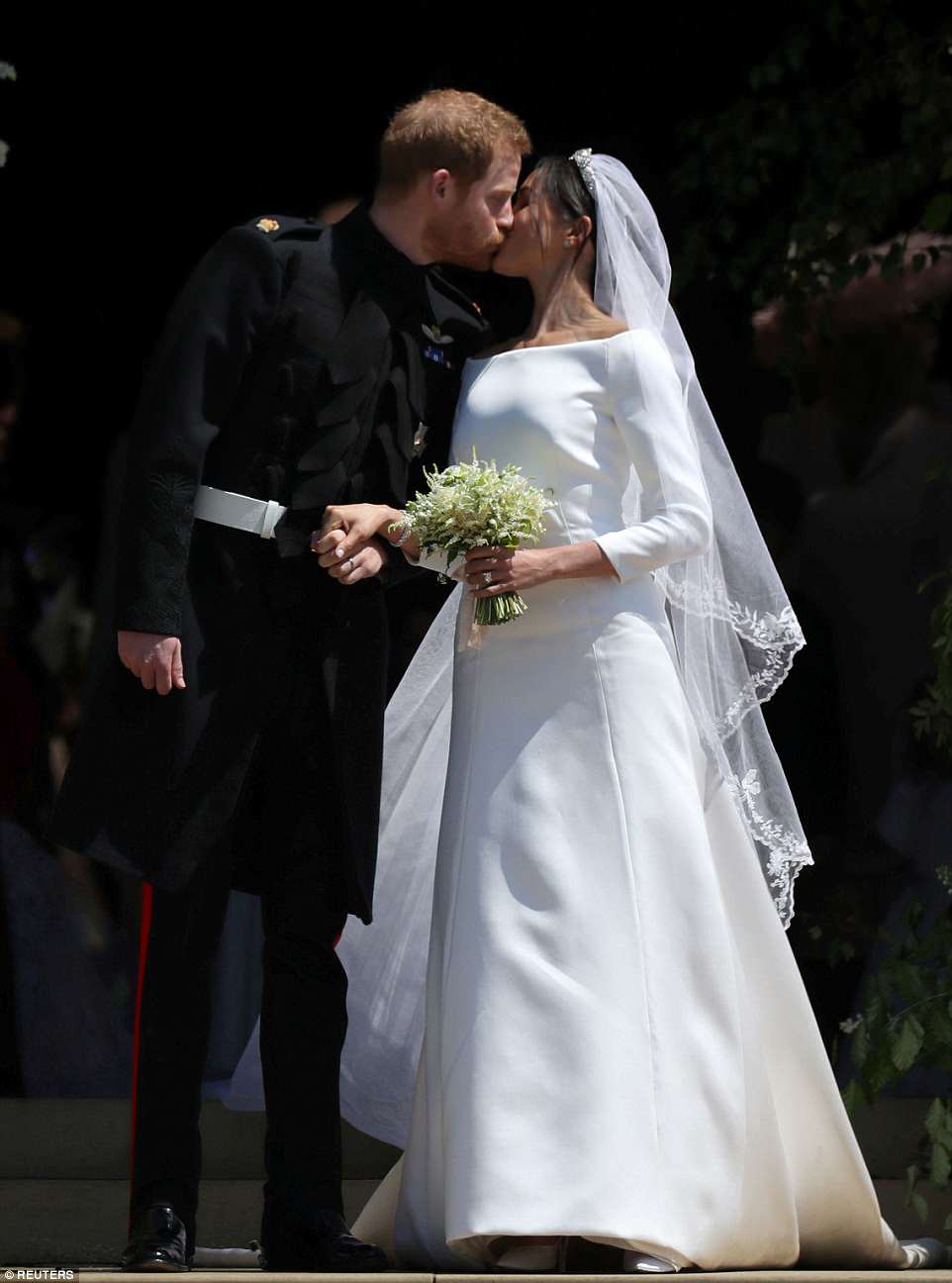 Harry and Meghan had wanted a ‘people’s wedding’ and 1,200 people were given a free goodie bag – but some have started to flog them off 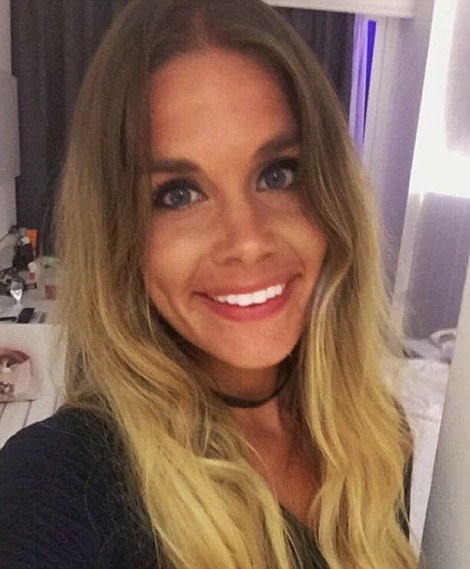 The 1,200 Community Champion guests arrived at 9am to see 600 VIPs including the Queen, Prince Philip and Prince Charles as well as the Clooneys, the Beckhams, Elton John and Oprah Winfrey turn up for the A-list wedding of the decade.

And as 120,000 well-wishers fought for space outside the castle these privileged 1,200 were able to get great views of the newlyweds as they kissed outside the chapel and paraded past in the royal Ascot Landau carriage.

But within hours of the event finishing dozens of their free hessian gift bags were being auctioned off to the highest bidder.

Many of the sellers had clearly planned to do it in advance because they photographed the items outside St George’s Chapel to ensure they looked genuine on eBay.

And fierce bidding saw offers for bags reach five-figures but those trying to cash in have been heavily criticised.

One seller said: ‘Buy a piece of history and memorabilia to celebrate a momentous special day for Britain’s and the royal family’.

Another hoping to cash in on the international market said: ‘I’m happy to send the gift bag internationally if your happy to cover the postage’.

One later claimed they would donate the cash to charity but had initially ‘forgotten’ to mention it on their eBay posting. 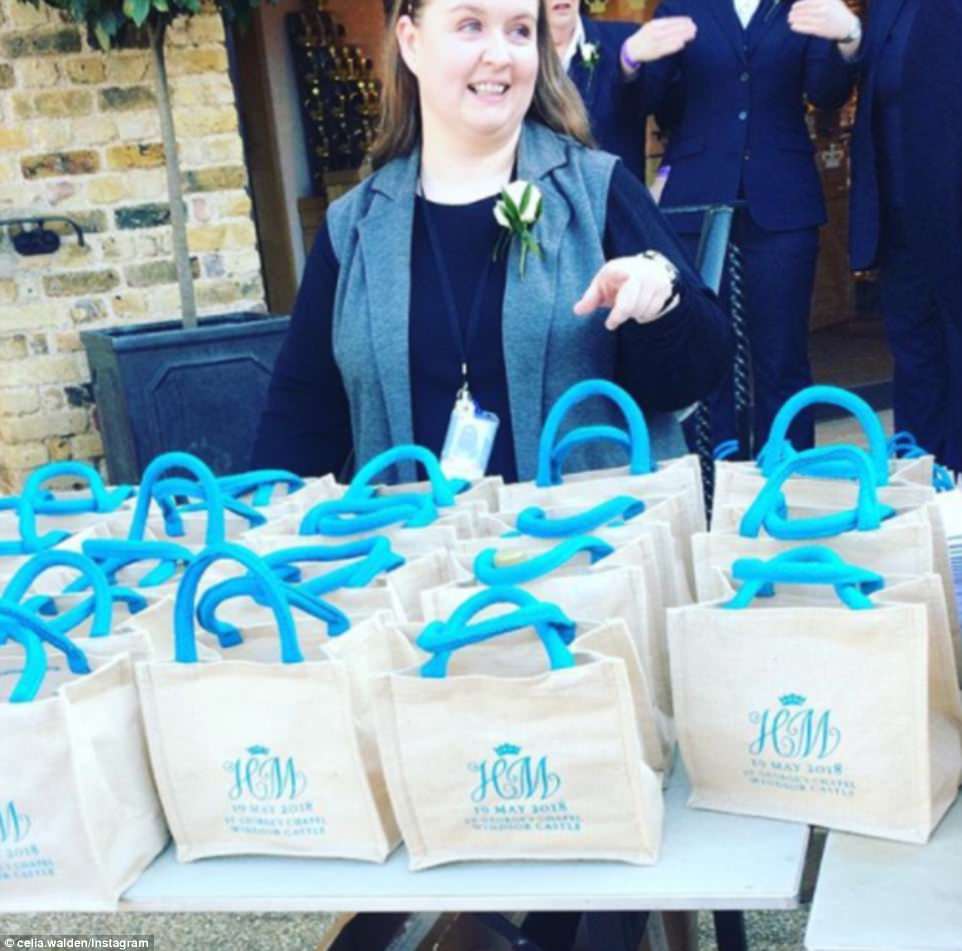 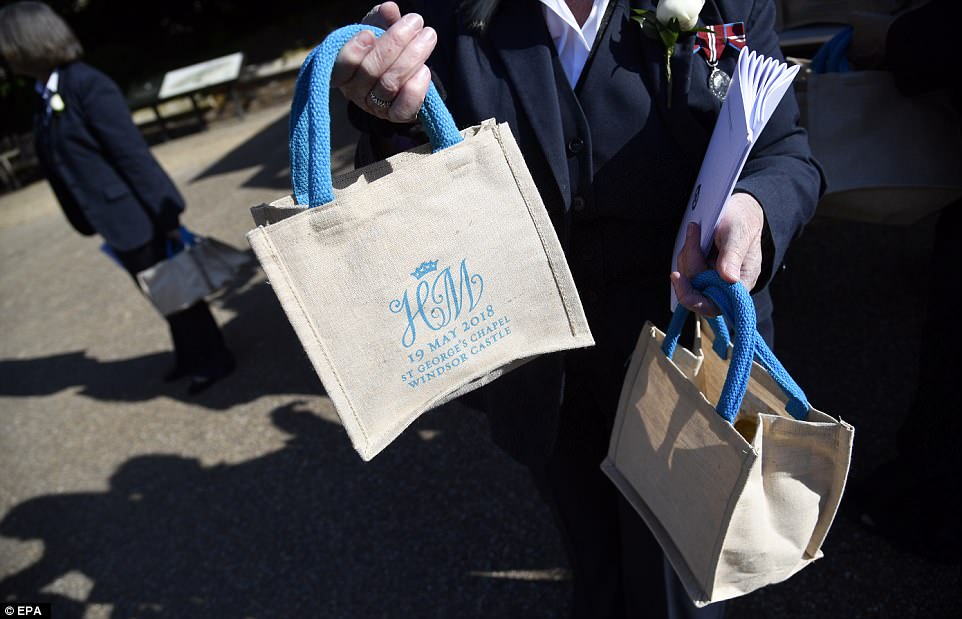 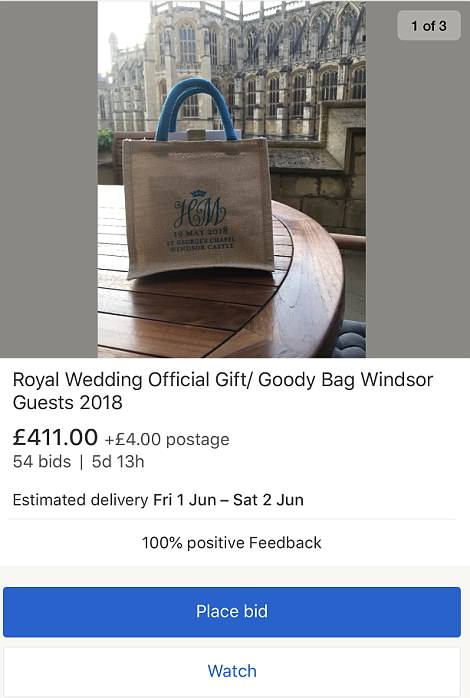 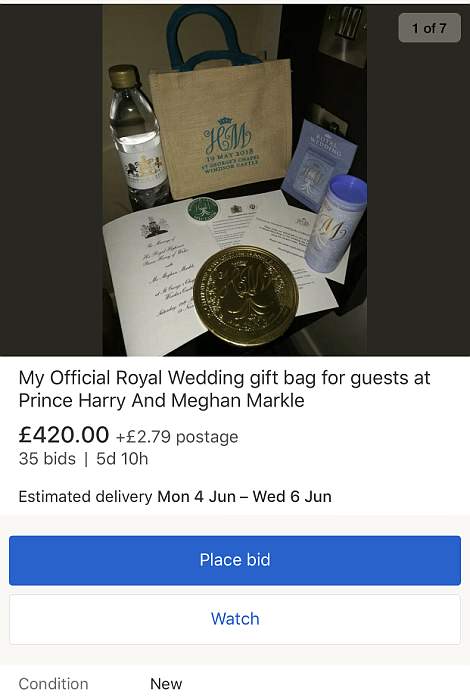 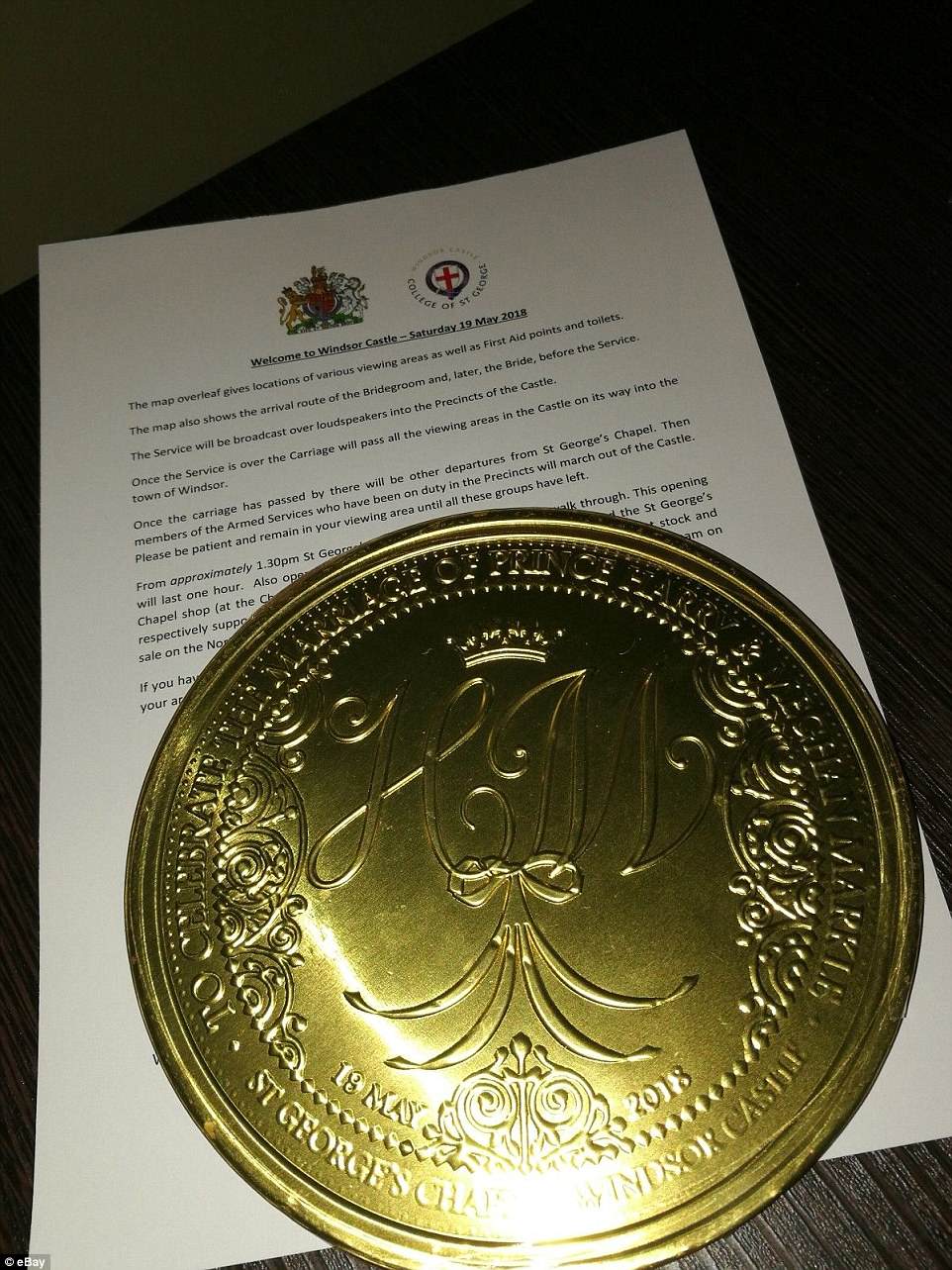 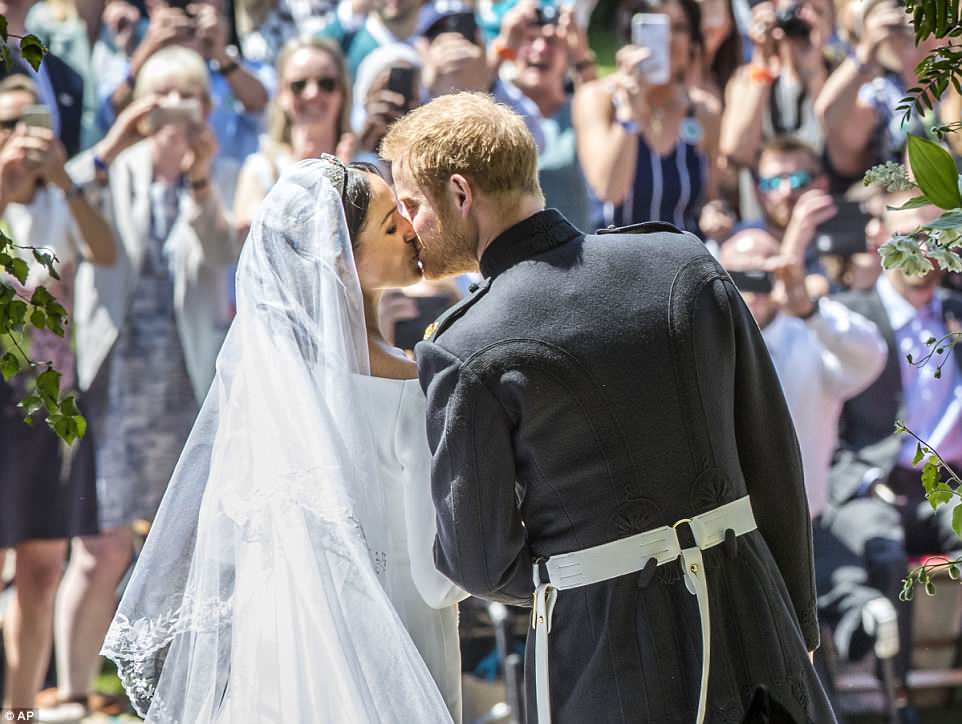 MailOnline has found at least 25 listings ranging from between £25 and £420 put up by 1,200 invited to share the big day inside the castle grounds (pictured)

It also emerged that an eBay seller is auctioning off PDFs of the royal wedding order of service and incredibly more than ten people have bought them for a £5 each.

‘It will be sent direct to your email address once payment is received for you to view or print off to make your own copy’. 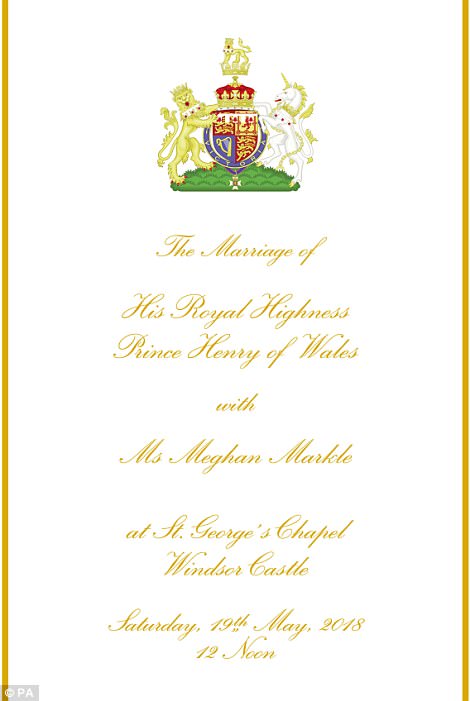 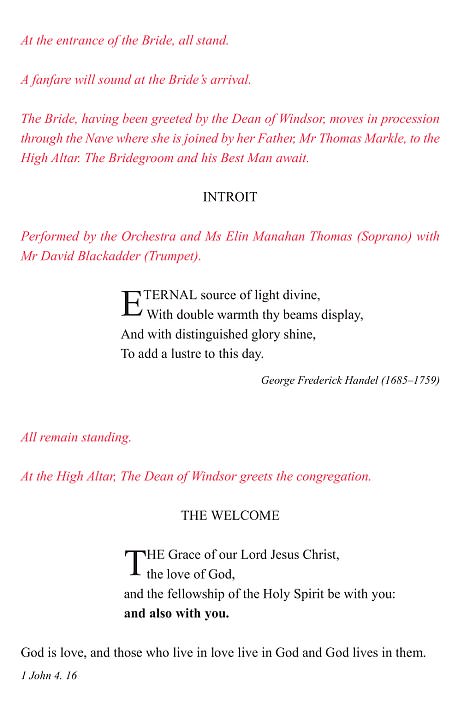 One seller is selling PDFs of the order of service for £5 when you can still get it for free via the royal family’s website. It contains the page saying Thomas Markle would give away his daughter that could not be changed in time for the wedding

Inviting 1,200 guests to get close to them was all part of Meghan and Harry’s most diverse and royal rule breaking wedding ever seen.

The newlyweds shared tears, laughter and a passionate kiss in front of their hundreds of VIP guests dominated by Hollywood stars including the Clooneys, the Beckhams, Idris Elba, Oprah Winfrey, Tom Hardy and James Corden.

Meghan is the first mixed-race member of the royal family in an extraordinary journey for a girl born in LA to a white father and African-American mother who fought her way through the tough world of showbusiness to land a plum role in the TV series Suits.

Harry and Meghan’s big day couldn’t have been more different than royal weddings of the past, especially because the prince was visibly emotional throughout – and guests suggested it was the most diverse major event in the Queen’s 66-year reign.

The prince had looked tearful when he saw his bride for the first time, grabbing her hand telling her: ‘You look amazing – I missed you’ before tenderly lifting her veil.

The new Duke of Sussex also said ‘thank you, pa’ after his father Prince Charles walked the now Duchess of Sussex down the aisle of St George’s Chapel, Windsor, having stepped in at the last moment for Meghan’s father Thomas. 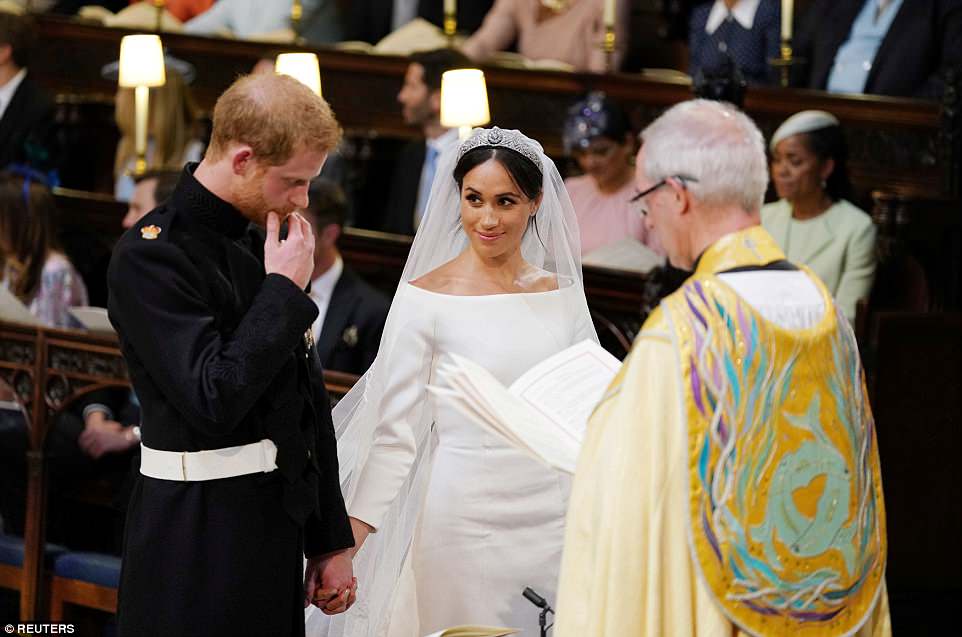 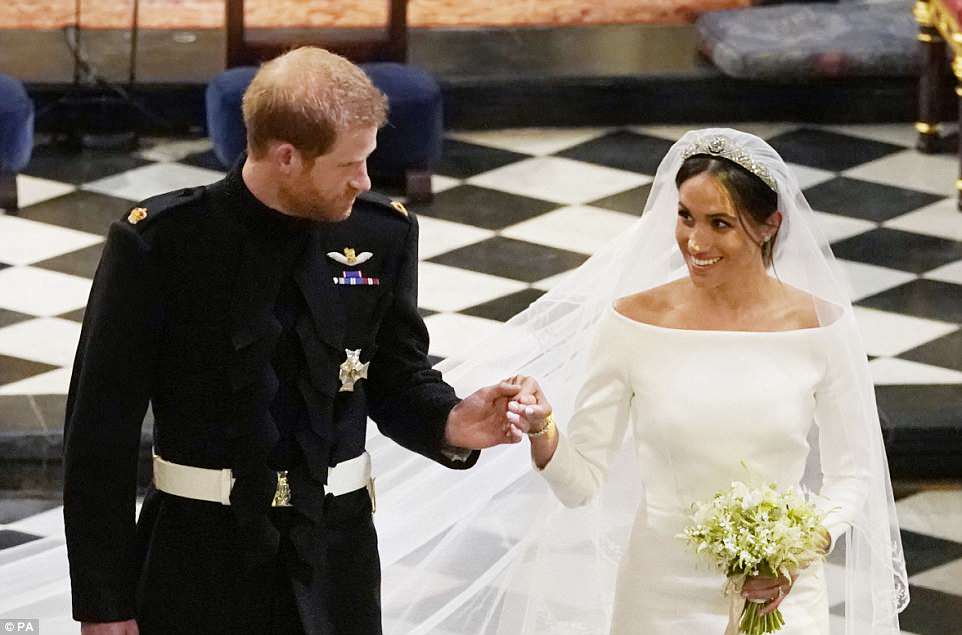 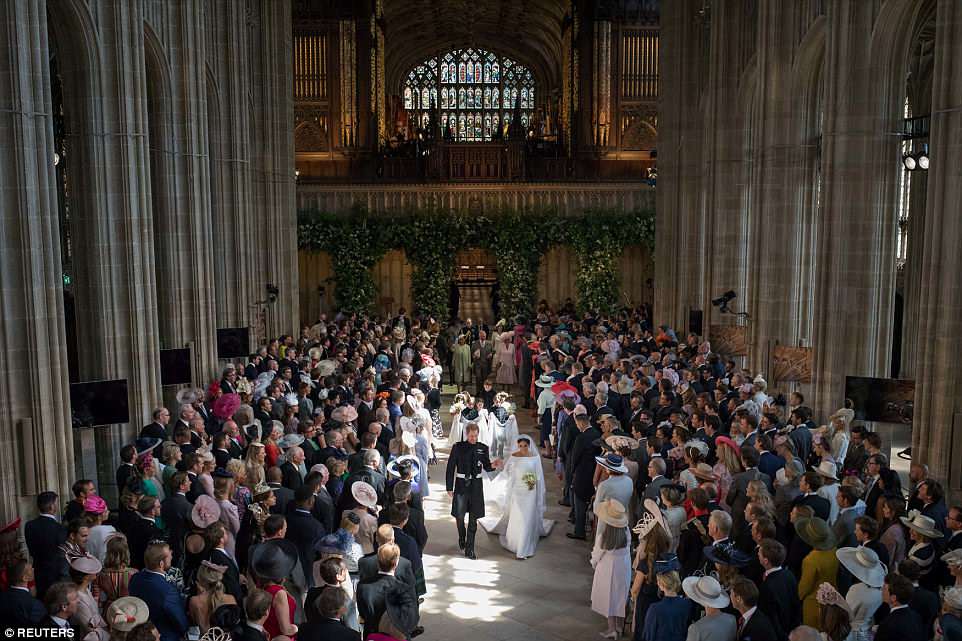 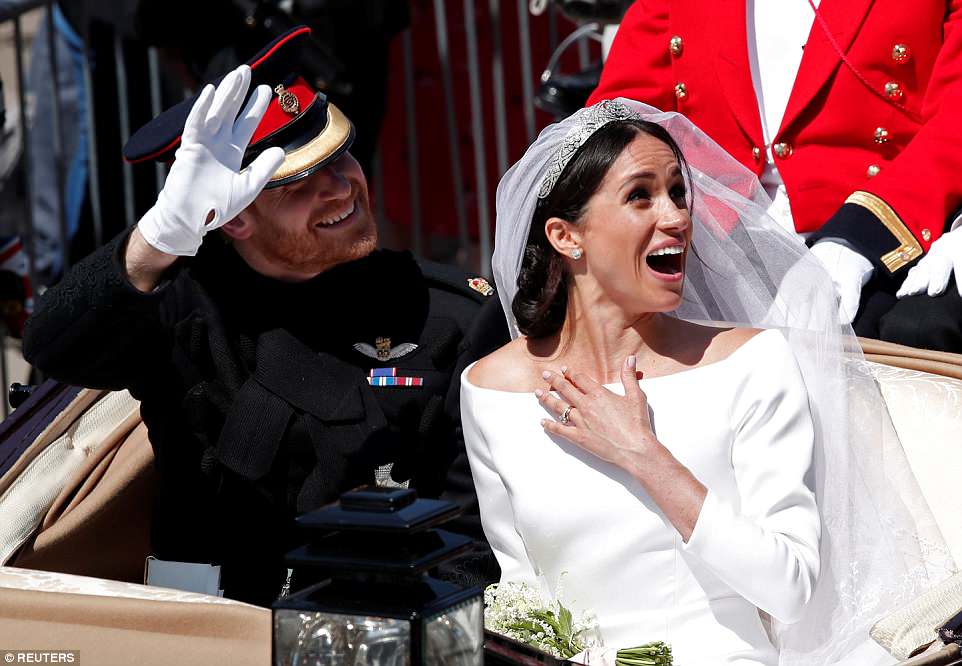 Laughter: One of the well-wishers in the crowds makes Meghan laugh and Prince Harry smile as they continue with their 25-minute tour of the royal market town

Meghan Markle told wedding guests: ‘I’ve found my prince’ in an emotional speech after her ecstatic new husband said the support of his ‘far better half’ meant he could finally be ‘me’, it was revealed today.

The new Duchess of Sussex also thanked the Queen, Prince Charles and other senior royals for welcoming her so warmly to the royal family ‘firm’.

Meghan’s short speech was yet another part of her modernising mini-revolution of the royal family because royal brides usually leave it to the groom to address guests.

The 36-year-old, who wore an aquamarine ring which belonged to Harry’s mother beloved mother Princess Diana, ended her short address by declaring her deep love for Harry and said: ‘I have found my prince’, according to the Daily Mirror.

Before she spoke Harry said his wife, brother, father and friends ‘are the people that make ‘me’, me, in my Harry life’ before adding: ‘Now I’m going to hand over to my far better half’.

Earlier he is also believed to have told his bride: ‘I can’t wait to spend the rest of my life with you.’

One source described how Meghan also expressed her gratitude at how welcoming the prince had been to both herself and her mother, Doria Ragland. 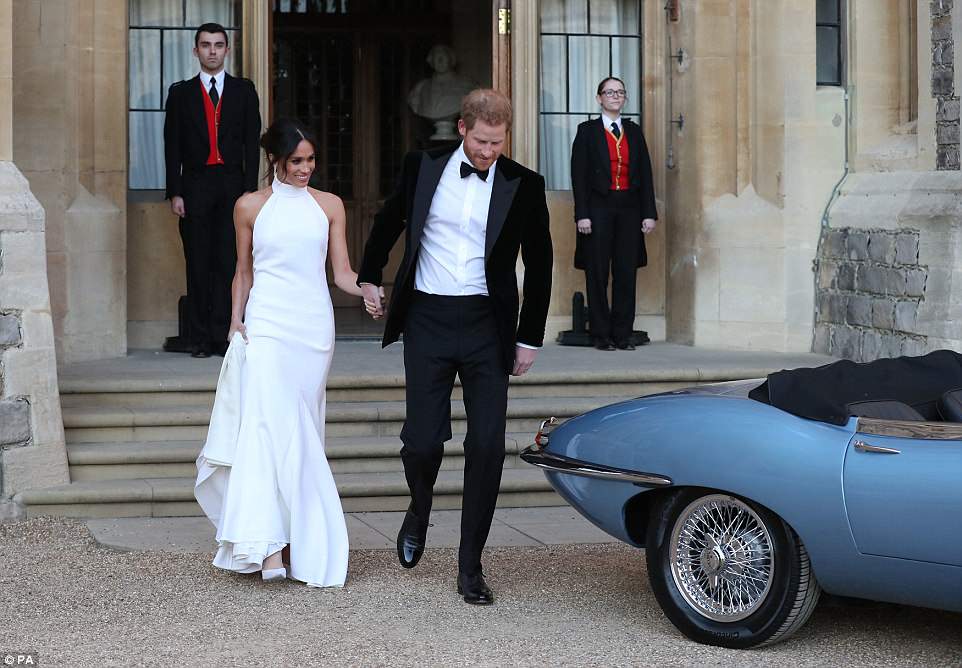 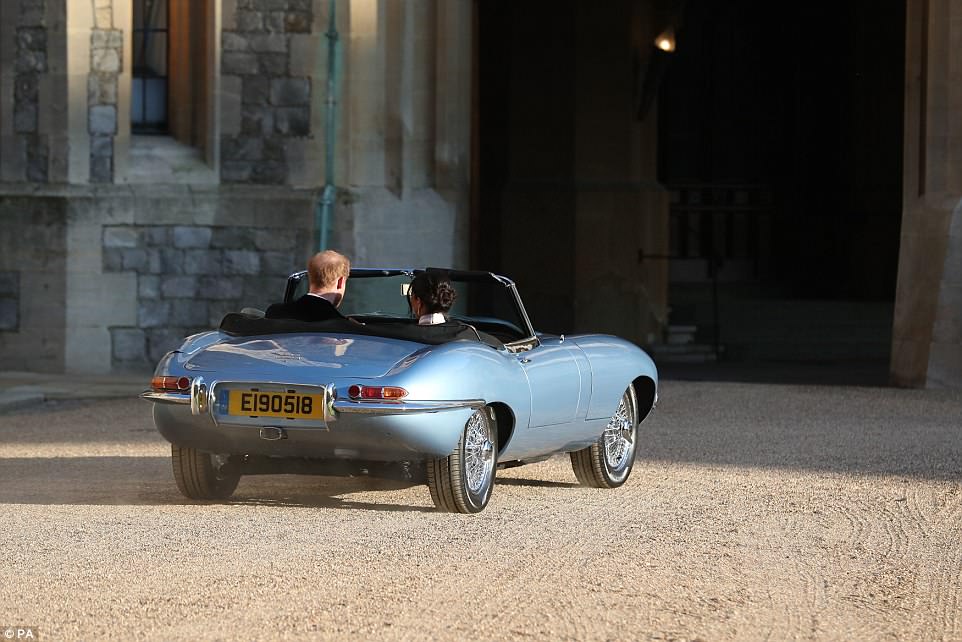 Harry and Meghan travelled in a Jaguar converted to electric power, which had a numberplate with Saturday’s date

Prince Charles had also paid tribute to his ‘darling old Harry’ in an emotional speech that is said to have left the 600 guests, including Hollywood stars, in tears.

Speaking at the afternoon reception at St George’s Hall in Windsor Castle shortly after they married he Charles told of how moving it was to watch youngest son get married.

Charles, who walked Meghan to the altar, finishing by saying: ‘My darling old Harry, I’m so happy for you.’

Harry, 33, is also said to have given an ‘off the cuff’ speech about how happy he was.

He is also said to have turned to his guests and asked: ‘Can anyone play the piano’ – before Sir Elton John played a medley of Your Song, Tiny Dancer, Circle Of Life and I’m Still Standing.

Harry also said Meghan had ‘navigated everything with such grace’, adding: ‘We make such a great team’. According to the Sunday Times.

Wedding guest Peter Fearnhead, co-founder of African Parks, told the Sunday Telegraph: ‘When Harry and Meghan came in they stood on the podium and Prince William introduced them.

‘Prince Charles made a really gracious speech, it was amazingly endearing. He’s got a wonderfully dry sense of humour. Prince Harry was charming about Meghan, they are so clearly in love. We all had a tear in our eye.’

Later he whisked his bride away in an open-top Jaguar to head for a star-studded, champagne-fuelled, black-tie reception for the bride and groom at the opulent Frogmore House in Windsor Great Park on Saturday night.

The newlyweds were cheered wildly as they took to the floor with the funky soul classic Land of a Thousand Dances for their first dance at the spectacular royal wedding reception.

Comedian James Corden is reported to have launched a dance routine with Harry, his brother William and his father Charles, apparently refereeing a ‘dance-off’, while George Clooney danced with both Meghan and Kate.

After a very modern take on the traditional royal wedding, the late-night revelry followed suit – and those fortunate enough to bag a place on the ultra-exclusive guest list were treated to a night of risque speeches, wild dancing and plenty of stodge to soak up the alcohol. 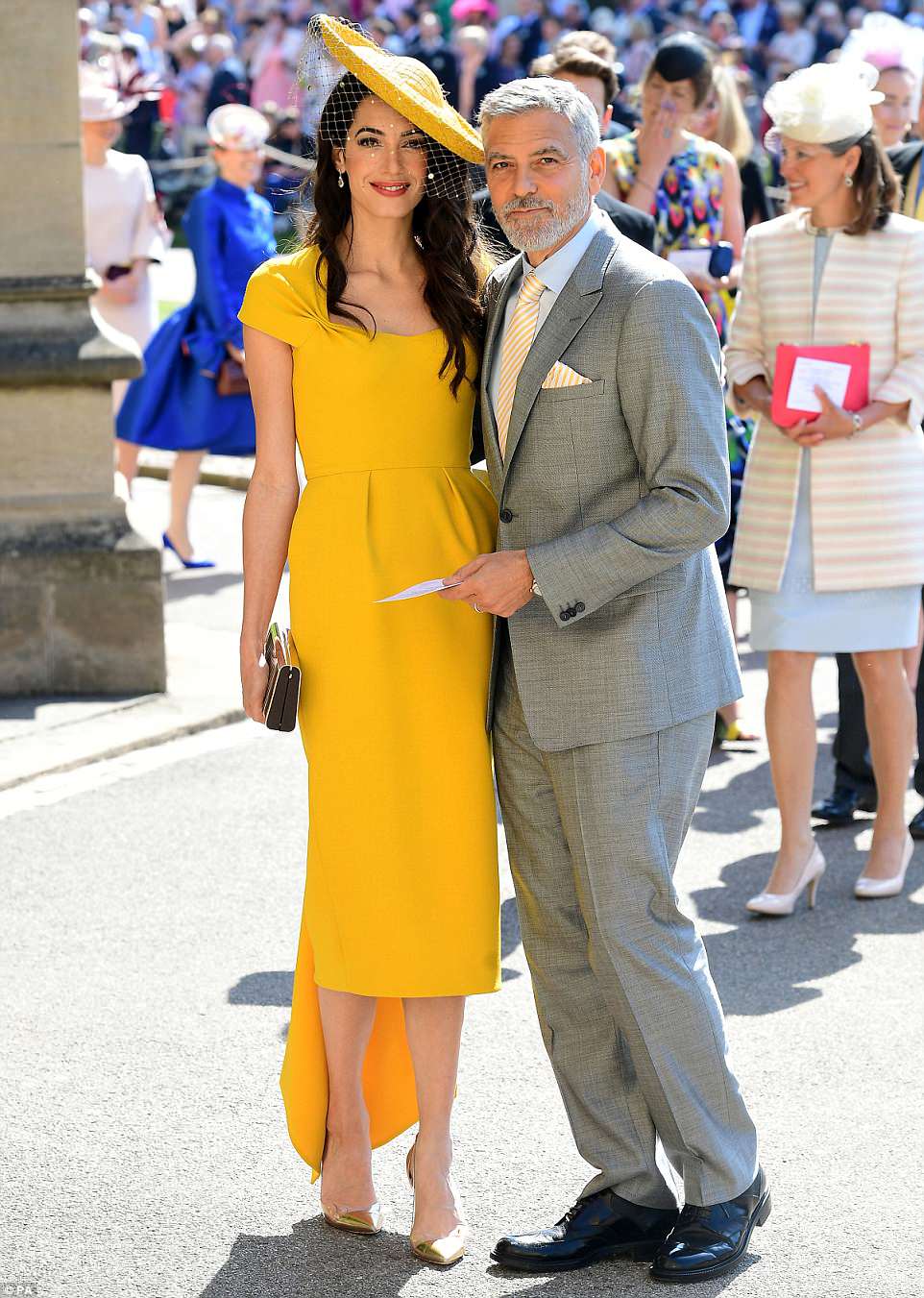 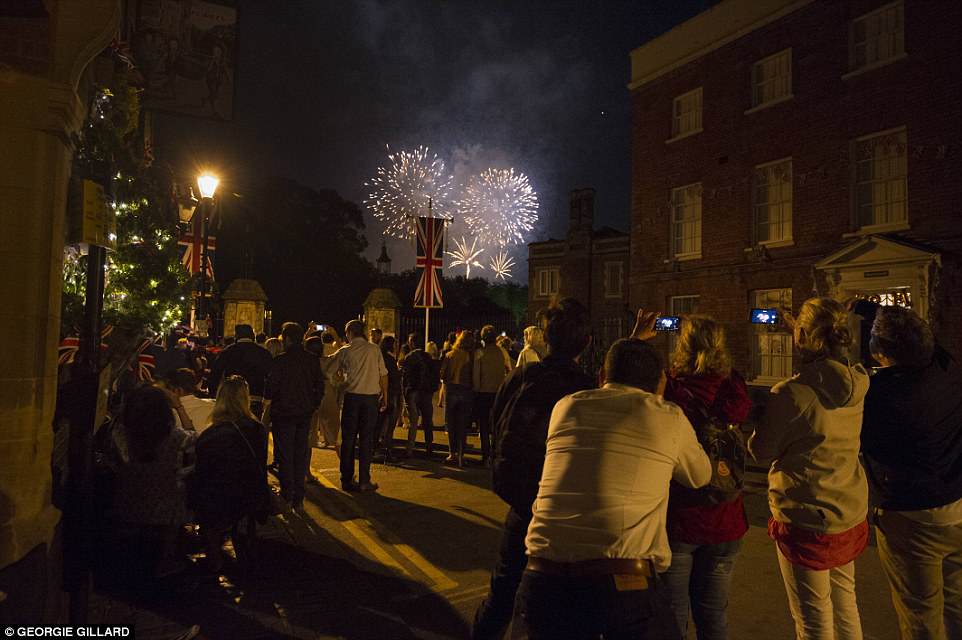 Exclusive details from inside the evening celebrations reveal that guests – including George and Amal Clooney, Sir Elton John and David Furnish and more glitzy actresses than an Oscars after-party – spent the evening sipping bespoke cocktails, tucking into ‘dirty burgers’ and candyfloss from outdoor stalls and dancing to a trendy DJ.

It was, insiders say, ‘the party to end all parties’, with a carnival atmosphere in the grounds of the 230-year-old stately home, which once belonged to George III.

Record viewing figures made Harry and Meghan’s wedding the TV event of the year so far.

It was watched by a peak of 13.1million just after 1pm on BBC1, making it the biggest peak figure so far in 2018, the broadcaster said. ITV’s coverage peaked at 3.6million.

The combined average audience for BBC and ITV was around 11million. But this was lower than the figure for the Duke and Duchess of Cambridge’s wedding in 2011, which had a combined audience of 17.6million – although this included people watching on catch-up. Charles and Diana’s wedding was watched by more than 28million in 1981.