Jeremy Kyle looked smitten with his new wife Vicky Burton on Saturday as the couple were pictured after marrying in a romantic church ceremony in Windsor.

The presenter, 56, and his former nanny, 38, sweetly linked arms as they made their way out of the church, with Vicky wowing in a high-necked bridal gown with a flared waist.

She added sparkle to her ensemble with a bejewelled tiara paired with a veil as she smiled at her new husband.

Newlyweds: Jeremy Kyle looked smitten with his new wife Vicky Burton on Saturday as the couple were pictured after marrying in a romantic church ceremony in Windsor

The couple exchanged vows in a romantic church ceremony in Windsor on Saturday, with the broadcaster praising his third wife for being his ‘rock’ during his battle with anxiety following his show’s cancellation.

Speaking to The Sun after tying the knot, Jeremy said: ‘Thankfully, at what is our sixth attempt after all the Covid cancellations and postponements, we got to enjoy the big day we’d both longed for.’

Jeremy, who returned to work earlier this year as a presenter of the drivetime slot on TalkRadio, added: ‘Vick’s been my rock in my darkest times. So to see her today, having such fun enjoying the wedding of her dreams, was perfect.’

It comes after Jeremy credited his fiancée with saving him after sinking to ‘his lowest’ when his ITV show was cancelled following a guest’s suicide.

Speaking to The Sun, he praised Vicky for her assistance during his dark days, which peaked when he turned to anxiety medication to alleviate his depression.

He said: ‘She’s seen me at my best, and at my lowest ever ebb, and still wants to marry me. She is the love of my life and I’m a very lucky man.’

Jeremy, who has four children from two previous marriage and a son with Vicky, has been dating Vicky – his children’s former nanny – since 2017 and became engaged the following February.

Jeremy revealed that he spiralled into depression and had to take pills for anxiety after his show was cancelled following a guest’s death.

The former daytime TV host said he couldn’t leave the house ‘or even open the curtains’ after being left ‘completely devastated’ at losing his job.

The show was axed in May 2019 after Steven Dymond, 63, is believed to have killed himself less than a week after failing a lie detector test while filming an episode of the show. That show was not broadcast.

Breaking his silence on the axing, Kyle said he felt ‘awful’ at being ‘scapegoated’ over the death, saying that accusations ‘often seemed to be levelled only at me’.

Speaking about Vicky’s role in helping his recovery, he said: ‘I could not have done it without her — she’s just been so ­balanced and grounded and supportive…

‘She’s not from that TV world and her advice has really helped me find perspective. I would give Vic massive, massive credit for getting me back on my feet…

‘She’s seen me at my best, and at my lowest ever ebb, and still wants to marry me. She is the love of my life and I’m a very lucky man.’

Speaking about the aftermath and how he was treated by fans and the public, he said: ‘I’ve felt hunted and made out to be responsible for everything that ever took place around that show. But I was just the face of it’

After losing his job on The Jeremy Kyle Show, which had been running since 2005, the star became depressed and ‘completely demotivated’.

‘Every ounce of energy seemed to have gone and I just couldn’t bring myself to leave the house or even open the curtains.

‘I used to think ‘get a grip’ when some celebrities talked about those sort of problems. But suddenly I realised first-hand you can’t always do that, I never thought they would affect me like they did.’

Prior to the show’s cancellation Kyle had already suffered a series of professional and personal setbacks.

In 2012 he was diagnosed with testicular cancer, before a year later losing his US version of the show.

He had also gone through a very public divorce from wife Carla in 2016, something which was often picked upon by guests looking to hit back at Kyle’s personal questioning.

Jeremy shares a daughter Harriet, 30, with his first wife Kirsty Rowley, who the now father-of-five married in 1989 before divorcing in 1991. Harriet made Jeremy a grandfather in 2018 with the birth of her child.

It was however, he says, his fiancée Vicky who encouraged him to see a doctor after the axing and he was diagnosed with anxiety disorder.

The diagnosis, Kyle believes, is what helped him to get back up and ‘start to rebuild things’.

Kyle, who is believed to be planning a return to television with a new series, gave his sympathies to Mr Dymond’s family, describing his death as a ‘terrible tragedy’.

Mr Dymond, a construction worker, died from a morphine overdose days after filming his episode on the show. He had also been suffering from an underlying heart problem.

He applied to be on the show to prove he had not cheated on his ex — but failed a lie-detector test.

Family members have said that the events on the show were too much for him to cope with.

An inquest into the death is still ongoing.

Kyle added that he would not comment at the moment on the death and circumstances surrounding it but that ‘When the time is right and it is appropriate to do so, I will have my say.’

For confidential support, call the Samaritans on 116123, or go to www.samaritans.org 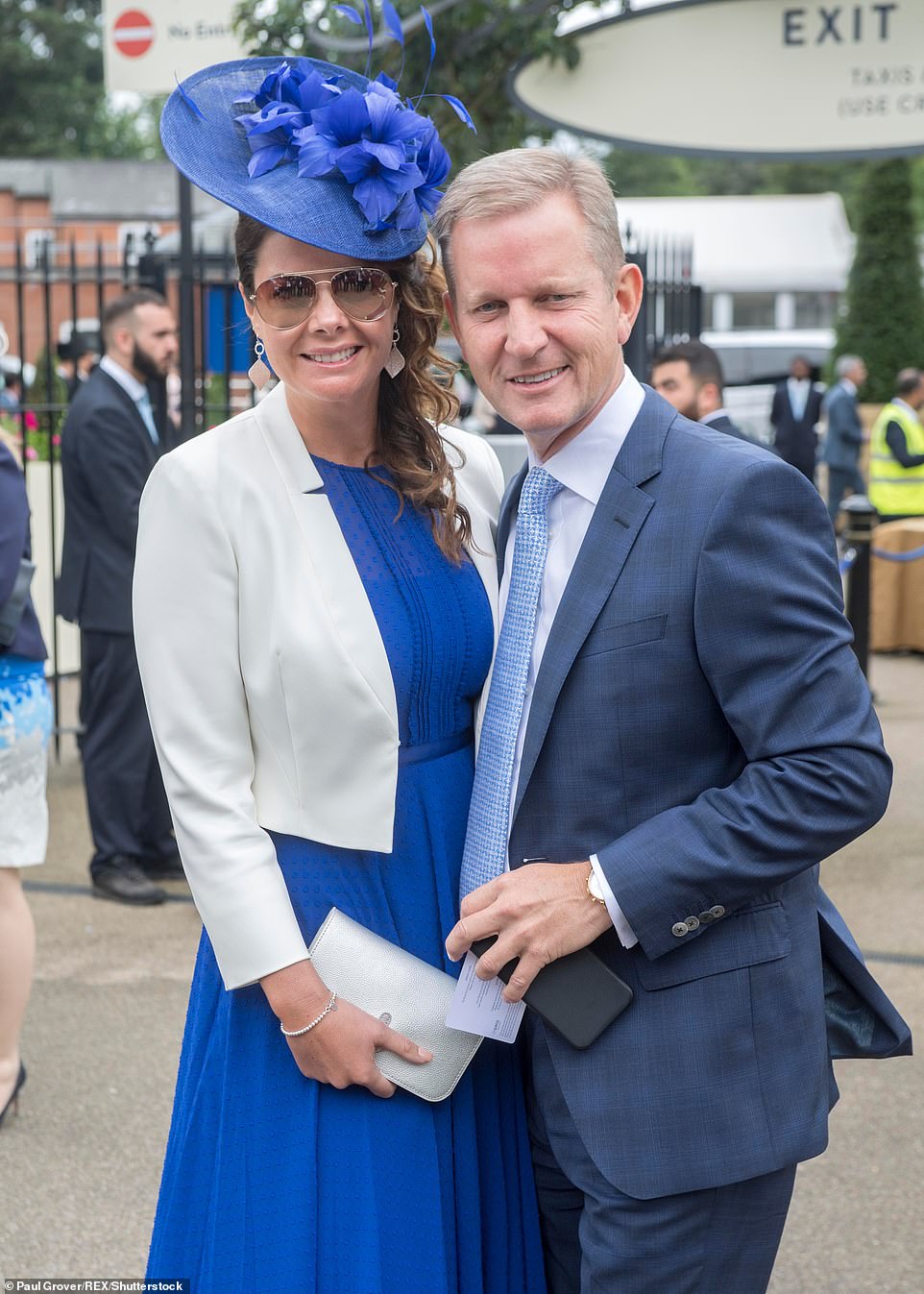 Support: Jeremy has been dating Vicky – his children’s former nanny – since 2017 and became engaged the following February