The family of a ‘loyal and caring’ woman killed when a crane collapsed onto their house in east London said they have been left ‘beyond devastated’.

June Harvey, 85, was killed and at least four others injured in the incident on Wednesday last week, including a construction worker who was taken to hospital in a critical condition.

Ms Harvey’s family said she was a ‘true Eastender’, who loved gardening and bingo, as they demanded answers on how the 20-metre crane crashed through the roof of their terraced house in Compton Close, Bow.

June Harvey, 85, (pictured) was killed and at least four others injured when a 20-foot crane collapsed through her roof in Bow

Her niece Jacqueline Atkinson, 63, who also lived in the house with her 28-year-old son Sam Atkinson and dog, Teddy, was just metres away from Ms Harvey when the crane hit their home.

‘I was upstairs in the same room as June when the crane hit,’ she said.

‘My son managed to help me escape by pushing a ladder up to the bedroom window and helping me climb down. 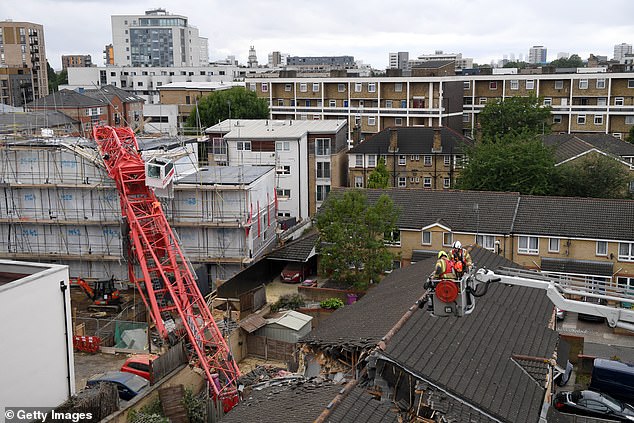 Ms Harvey’s family said she was a ‘true Eastender’, who loved gardening and bingo

‘I couldn’t believe it when I saw the crane had smashed into the house leaving it like a pile of rubble.

‘There was dust everywhere and Sam and I were both taken to hospital but sadly June didn’t make it.’

Her son, a chef in Canary Wharf, last week said the noise was so loud he thought it was a ‘plane crash’ and told of his and his mother’s ‘miracle’ survival. 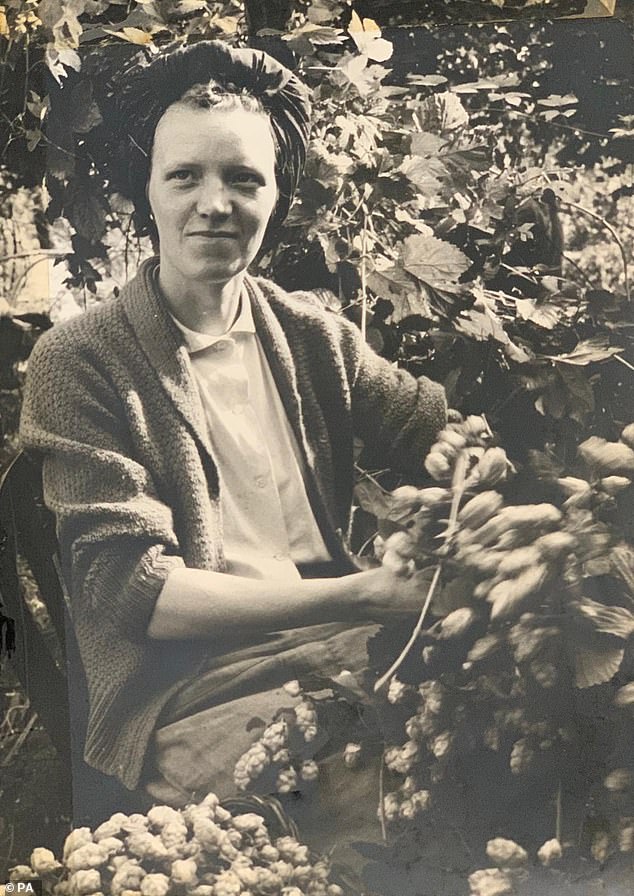 The family of Ms Harvey (pictured) are now demanding answers on how the 20-metre crane crashed through the roof of their terraced house in Compton Close, Bow

Mr Atkinson said on Tuesday: ‘We need answers about how this happened. We have lost everything and now we have a funeral to arrange and respectfully ask that we are given space to grieve.’

His mother said Ms Harvey, who had worked as a sewing machinist, moved into their house last year so she and her son could help look after her.

‘She was loyal and caring a true Eastender,’ she said.

Her niece Jacqueline Atkinson, 63, who also lived in the house with her 28-year-old son Sam Atkinson and dog, Teddy, was just metres away from Ms Harvey (pictured) when the crane hit their home

‘She was a wonderful woman, and a talented seamstress who was totally dedicated to her family. We are beyond devastated by what has happened.

‘June loved gardening and spent much of her younger life outdoors in the garden and had a huge knowledge of plants and flowers.

‘She also loved bingo and used to go almost every night. She was a bingo caller for many years at a local hall.’ 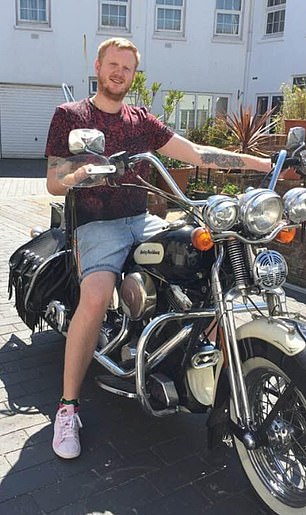 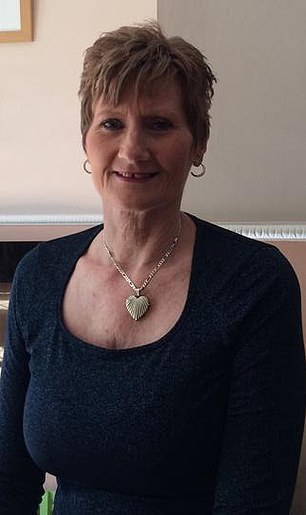 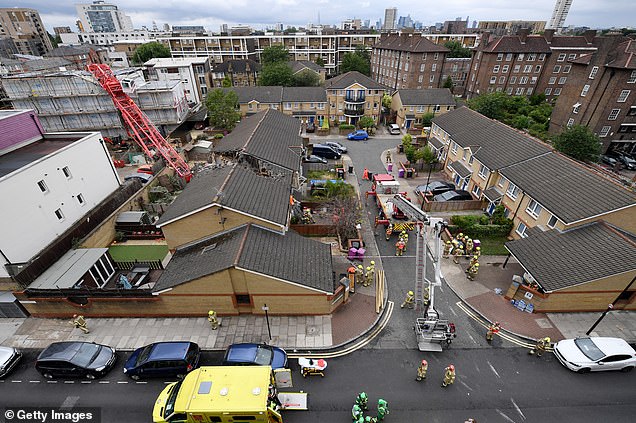 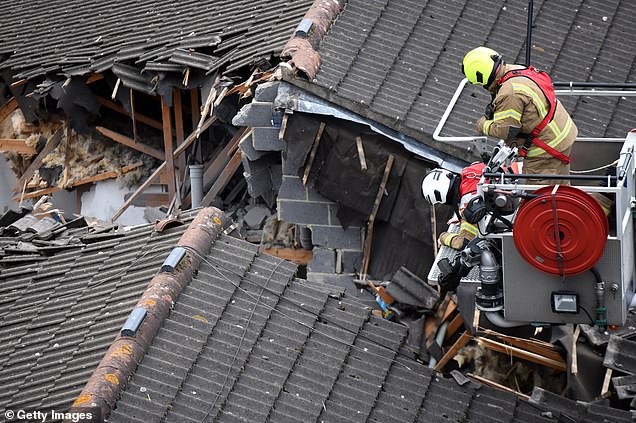 Her family have set up a GoFundMe page to help pay for the costs of Ms Harvey’s funeral, which has so far raised more than £2,000.

The crane that collapsed was being used by Swan Housing Association and NU living on a site in Watts Grove.

The Metropolitan Police have launched a joint investigation with London Fire Brigade and the Health and Safety Executive.

Detective Chief Inspector Mark Wrigley said on Friday: ‘The investigation into how this crane came to collapse is still in its very early stages but I am appealing to the public to assist us in building a picture of how these events unfolded.

‘I am looking for anyone who witnessed the incident, or the moments prior to the crane collapsing to get in contact.’

Mr Atkinson said last week: ‘The noise was indescribable. It was just so loud. I thought it was a plane crash or the bath had fallen through. 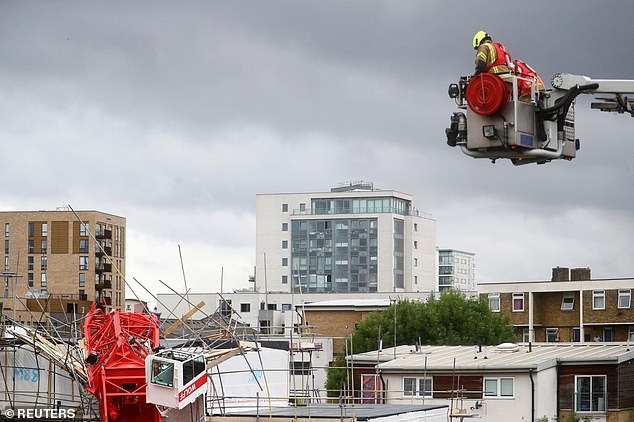 Rescue personnel work at the area where a crane collapsed in Bow, east London

‘As I looked around, the whole house was destroyed and crumbling around me. I was screaming for my mum to check she was OK and my great aunt.

‘As I tried to get up the whole stairs were completely blocked off with rubble. I tried to push through it, but it was just impossible.’

Mr Atkinson said he ran out of the house, before rescuing his mother.

He said: ‘The neighbours called me to the front, where she was at the front window. I grabbed a ladder and a neighbour grabbed another ladder to get her down. It’s just a miracle that we’re alive.

‘It was lucky it didn’t come straight through and crush me, crush my mum. She was about a metre away from where my aunt was. They were sorting out clothes in one of the bedrooms. They were really close.

‘We were extremely lucky to get out alive and be here now. It’s a true miracle we are but it’s devastating my aunt had to go in such tragic circumstances.’ Janet Bennett, 64, a retired cleaner for Morgan & Stanley, said: ‘In consideration they should not be working on the site with that crane so close to what’s happened.

‘It’s a disgrace. It should have been put on hold before the body is recovered. It’s a big flipping crane. If it comes down here, it’ll come down right on where these houses are. It’s a total lack of respect. It’s disrespectful to her memory.’

One witness said she saw a ‘shivering and shaking’ woman being led to safety after she was rescued from the second floor by firemen who had scaled up ladders to the window.

Sahana Begum, who lives a few streets away, rushed outside when she hard the crash. She said: ‘I saw someone yelling that a crane had fallen but then I could also hear someone saying ”help, help, help”.’

At this point a few of the local people from the community tried to help the woman get down – including two men with ladders.

Ms Begum said: ‘As she was coming down the ladder you could see that she was shivering. She was shivering so much that she could have fallen over because she looked like she was going to miss her step.’ 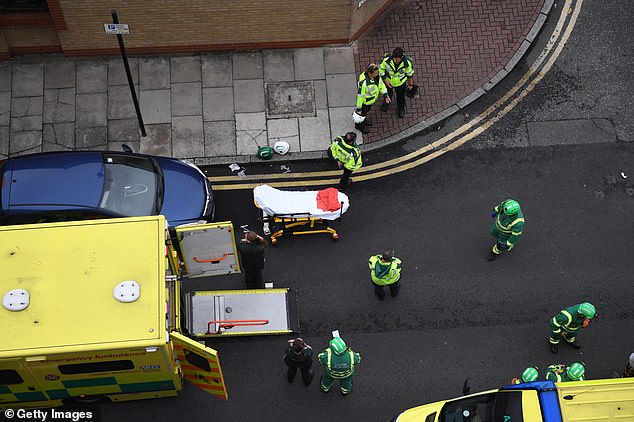 Emergency services at the scene yesterday. One woman died in the collapse and another four were injured – two of them rushed to hospital with head injuries

She said she noticed the woman was barefoot and a man gave her a pair of sandals, adding: ‘She was really shaking.’

A woman whose home was damaged by the crane said her family are lucky to be alive. In a shaking voice, the woman who did not want to give her name, said the structure’s impact felt ‘like an earthquake’.

She continued: ‘I came out of the bathroom and if I had come out a second later, the attic door which is above could have fallen on me and that would have knocked me out.

‘The way that everything fell – if my brother or sister had been in their rooms which is where it hit directly, I just cannot bear to think about it. If you could see the state of our garden.

‘My dad was walking back into the house to tell everyone ”move, there is a crane coming down”. 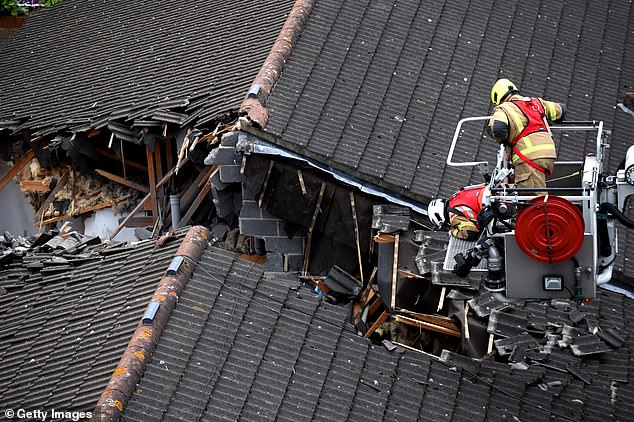 A firefighter looks down through the collapsed roof of a terraced house, after a crane collapsed onto it on July 8, 2020 in Bow, England

Describing the devastation left in her home, she said: ‘There was just rubble and stuff in the doorway. There was smoke and just bits and bobs around.

‘My mum was shouting for me because she thought it had hit me. She was screaming. I was screaming back. I then realised my brother was downstairs and I need to grab whatever I can and just go. I am not sure how I managed to run downstairs because there was stuff everywhere.

‘All the smoke alarms were going off. I went to the sitting room. It sounded to me like an earthquake or almost like a stone that someone had chucked into our home. We are all just so lucky to be alive – that is all I can really say.’

John Biggs, Mayor of Tower Hamlets, said he was ‘extremely worried’ by the incident, adding: ‘Council teams are on site supporting emergency services and setting up a rest centre for affected residents in the area.

‘Our thoughts are with everyone affected. Priority is to ensure safety but need answers as to how this happened.’

Unite national officer Jerry Swain said there must be ‘an urgent, full and complete investigation into the circumstances that led to this accident’.

He added: ‘The preliminary findings of which must be released in weeks, rather than months or years, in order to ensure that similar accidents are avoided in the future.’

Work on the Watts Grove site began in 2018 where the one, two and three-bed shared ownership apartments are replacing an electrical substation building, according to the NU living website.

Swan Housing Association Chair Valerie Owen and Chief Executive John Synnuck said in a statement: ‘We would like to extend our deepest condolences to the family who have lost their loved one as a result of the incident. Your loss is a personal tragedy.

‘We recognise that whilst understanding how this happened will not ease your pain, we would like to reassure you on behalf of our organisation that we will fully support the Health and Safety Executive and the authorities in their investigation so that you can receive a full, transparent answer to how this incident took place.’

A Health and Safety Executive spokesman said: ‘HSE is aware of the incident and is in contact with the emergency services.’

Neil Marney, chief executive of Marney Construction, said his company was working on another site and he could see the crane being erected on Tuesday.

He said: ‘My project manager on the site called me immediately and said the crane you were looking at yesterday being erected has just collapsed.

‘So all I could see yesterday was the mast and the cab was on, and then I believe they started to add sections of the boom.’

The crane that collapsed was not one of Marney Construction’s cranes nor was it a crane on one of its sites.

A spokesman for Gateway Housing Association, which owns the house in which Ms Harvey was killed in, said: ‘Everyone at Gateway is shocked and saddened by this terrible accident.

‘Our thoughts and condolences are with the family and friends of the deceased. We very much hope those injured make a speedy and full recovery.’