PICTURED: Mike Pence in a secure location under the Capitol after telling Secret Service he didn’t want rioters to see him ‘fleeing’ – as Proud Boys say they would have killed him if they found him

The House select committee on January 6 showed images for the first time of Vice President Mike Pence waiting out the Capitol attack from a secure location within the U.S. Capitol complex.

The former counsel to the vice president Greg Jacob testified to lawmakers that Pence refused to get into his car once Secret Service moved him from his ceremonial office outside the Senate chamber to a garage-like structure.

Rep. Pete Aguilar, a committee member leading some of the questioning Thursday, informed Jacob that the mob was ‘approximately 40 feet’ from Pence’s escape path.

’40 feet is the distance from you to me roughly,’ the Democrat, seated on the dais, informed the witness, testifying from the well.

‘Make no mistake about the fact that the vice president’s life was in danger. A recent court filing from the Department of Justice explains that a confidential informant from the Proud Boys told the FBI that the Proud Boys would have killed Mike Pence if given the chance,’ Aguilar also offered.

The House select committee on January 6 showed images for the first time of Vice President Mike Pence waiting out the Capitol attack from a secure location within the U.S. Capitol complex 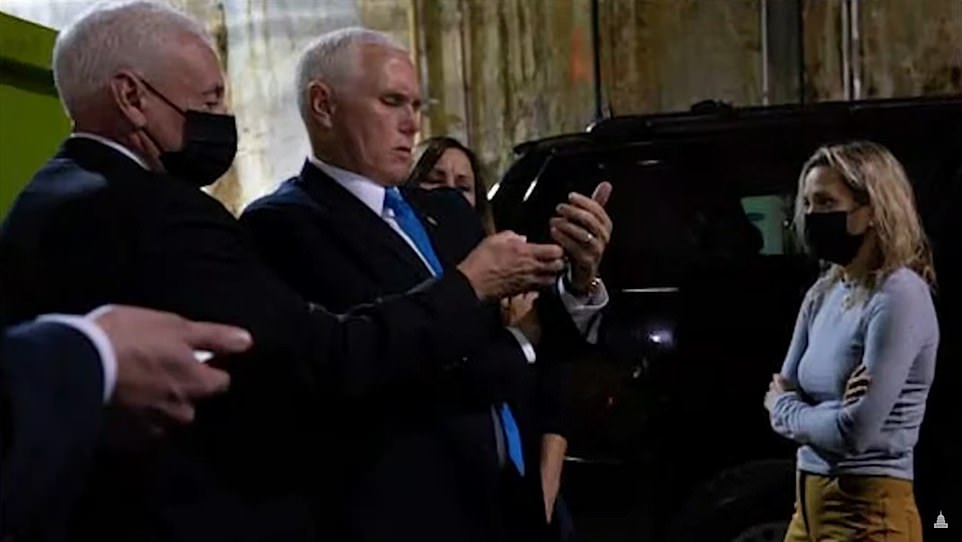 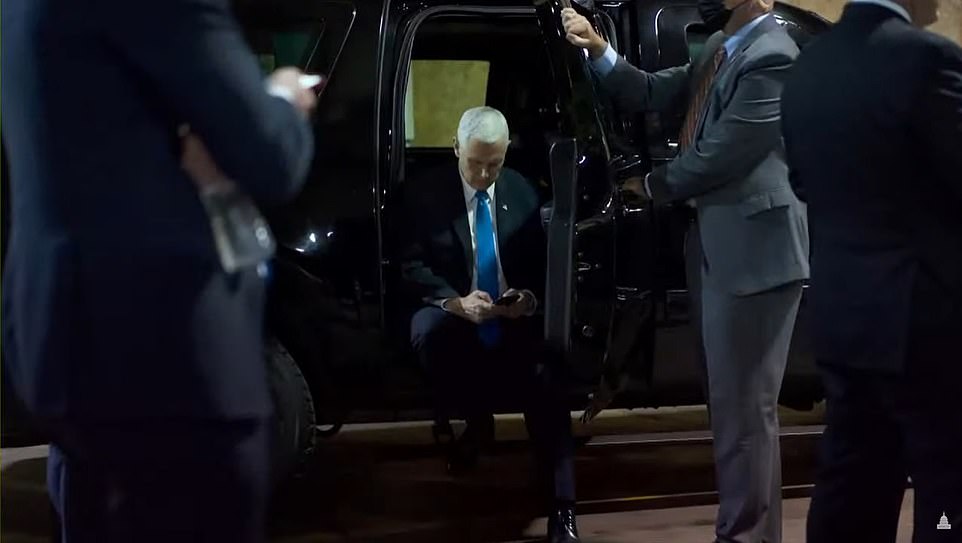 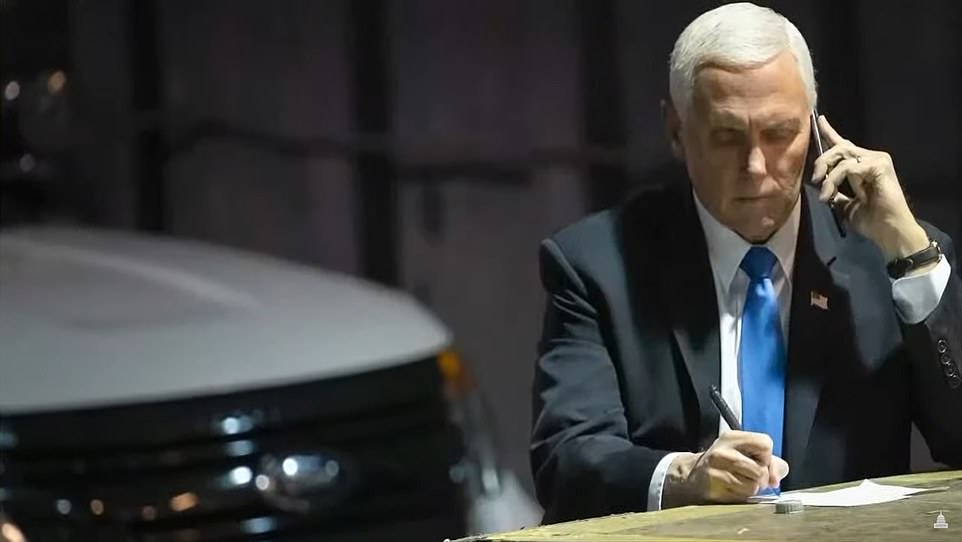 Another image of Vice President Mike Pence on the phone in a secure location in the U.S. Capitol complex on January 6 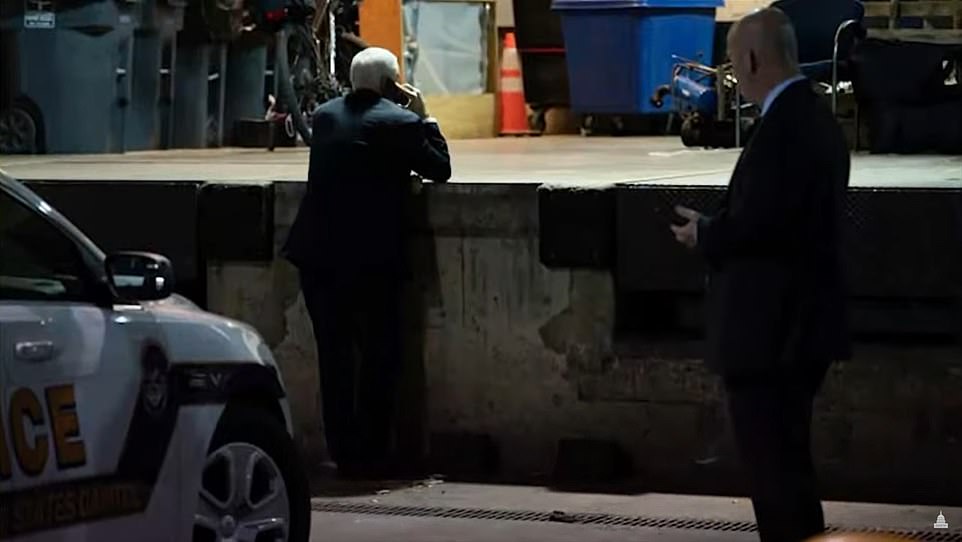 A police car is seen in the secure location where Vice President Mike Pence was kept hidden during the January 6 attack on the U.S. Capitol

But Jacob testified that Pence was resistant when pressed to leave.

Instead he, his wife Second Lady Karen Pence and aides spent 4.5 hours in the secure locale.

‘He was determined that we would complete the work that we had set out to do that day – that it was his constitutional duty to see through,’ Jacob continued.

‘And that the rioters who had breached the Capitol would not have the satisfaction of disrupting the proceedings beyond the day on which they were supposed to be completed,’ the lawyer said.

Thursday afternoon’s hearing was dedicated to former President Donald Trump’s pressure campaign to have Pence overturn the election on January 6, when he was chairing a joint session of Congress to count the electoral ballots. 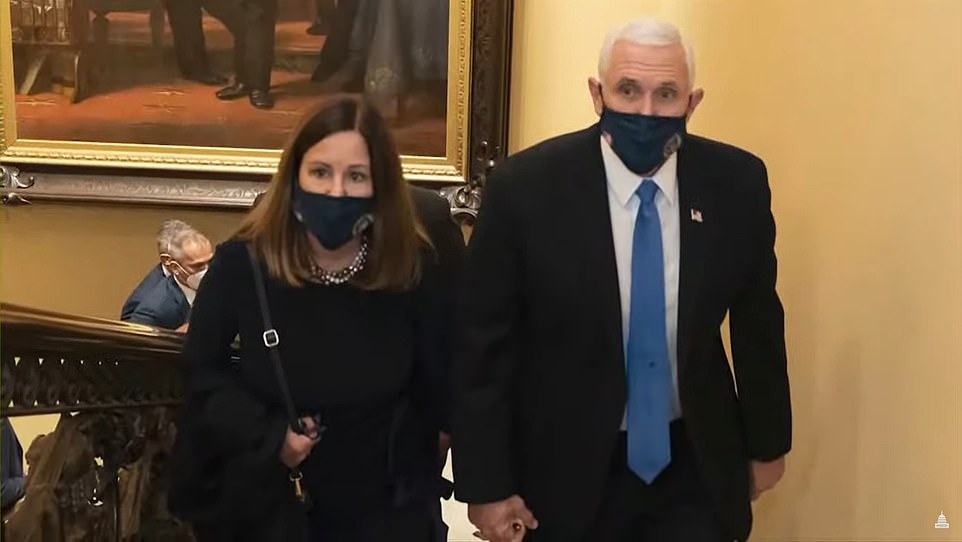 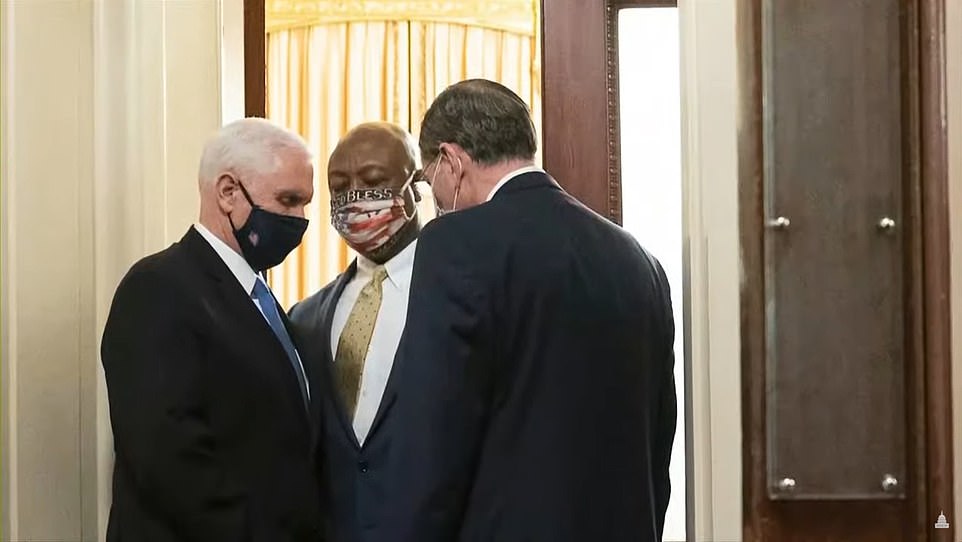 Vice President Mike Pence (left) and Sen. Tim Scott (center) pray with another individual after Pence spent 4.5 hours hiding out in a secure location during the January 6 Capitol attack

The never-before-seen images from the National Archives of the then-vice president, show a pensive Pence working through the hours while the MAGA mob ransacked the Capitol.

In one, he’s looking at an image on one phone, while talking on another. A blonde female aide is in the frame.

A similar image shows Karen Pence is at his side.

Another image shows him on the phone while writing something down on a piece of paper.

He has a half-finished Diet Coke opened next to him.

And another shows him seated in the door of his black SUV, which he refused to use as a getaway vehicle from the Capitol.

At 4:19 p.m., Aguilar said that Pence was captured looking at a tweet sent out by the president, finally asking rioters to leave the Capitol.

Another photo shows the Pences, holding hands, after leaving the secure location.

The next image shows the vice president, Sen. Tim Scott and another man, and they appear to be praying.

The committee’s Democrats commended Pence’s actions on January 6, as he refused to do Trump’s bidding and certified now President Joe Biden’s election win.