Pictured: NHS worker, 42, who was stabbed by patient in Ayr

The hospital worker stabbed in the car park of a drug rehabilitation unit yesterday has been named locally as 42-year-old Donna Maxwell.

The community support worker was attacked outside Ailsa Hospital in Ayr before she staggered back inside the building to raise the alarm.

Police closed off the hospital as officers searched for the female attacker. Dog handlers and a police helicopter were called to the scene to assist in the hunt.

Ms Maxwell was taken to Ayr Hospital where her condition was last night described as serious but stable. 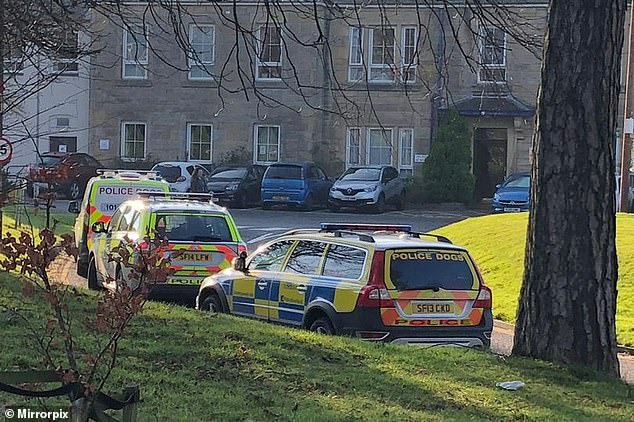 Patients and staff at Ailsa Hospital (pictured today) in North Ayrshire, Scotland, were told to stay in their rooms, while a police helicopter circulated overhead

A former employee who lives nearby said: ‘I was walking through the woods behind the hospital when the stabbing happened. I didn’t know what was going on at the time until a policeman came up to me and asked if I’d seen anyone in the grounds around the time it happened.

‘He told me there had been someone stabbed in the car park and that the place was on lockdown. The police helicopter suddenly appeared overhead and the dog unit also arrived.

‘I heard it was something to do with the addiction services clinic. They have a drop-in service at around 10am so it’s likely something happened there.

‘Police were crawling all over the place all morning and in the afternoon.’ Police Scotland said it increased patrols in the area in a bid to reassure patients, staff and the public.

The hospital was reopened at 1pm but the car park outside the addiction services unit was being guarded by police last night.

Two officers were also posted outside the accident and emergency department of Ayr Hospital throughout the afternoon.

Superintendent Brian Shaw said ‘I am particularly keen to hear from anyone who was in the area around 10am and has information about a woman who was seen leaving the area shortly after the 42-year-old woman was stabbed.

‘She is described as being around 5ft 2in to 5ft 3in, slight build and pale complexion. She was wearing a dark woolly hat and a dark jacket.

‘Officers remain at the hospital and we have increased highvisibility patrols in the area to reassure patients, staff and the wider public.

‘We are assisting Police Scotland with their investigations, and to ensure the safety of staff, patients and visitors. We are unable to comment further at this time.’ 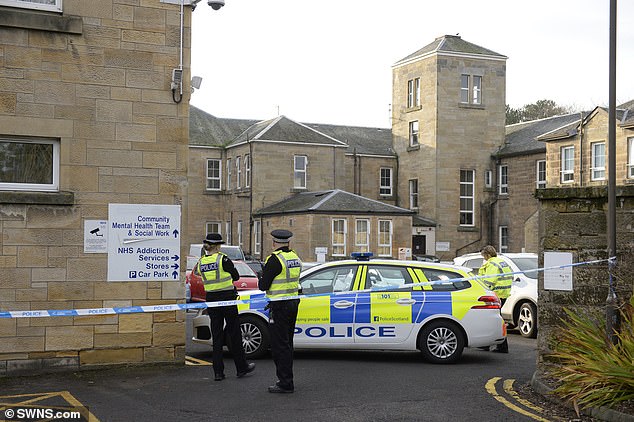 In a statement, the Royal College of Nursing said: ‘Our thoughts are with the woman and her family and colleagues. The safety of patients and staff must be the priority at this time.’ Former workers told of fears among staff that cutbacks could potentially leave nurses and other employees vulnerable at the hospital.

One local, who worked as a psychiatric nurse at Ailsa and other hospitals in Ayrshire and Arran for 34 years, said the attack may have happened due to a lack of mental health facilities.

The retired 66-year-old, who did not wish to be named, said: ‘There’s not many nurses at Ailsa now since most of the buildings are used for community teams who use it as their base.’ Ayr MSP John Scott raised the attack during First Minister’s Questions at Holyrood.

In response, First Minister Nicola Sturgeon said: ‘The health secretary has been able to advise me and our understanding is, let me stress this is our understanding, that injuries sustained by a nurse are not life-threatening.’

‘The place was on lockdown’