Two six-year-old cousins who were killed after an ex-convict allegedly stole a police cruiser and crashed into two cars at 97mph have been described as ‘best friends who did everything together’.

Penelope Jasko and Eleanor McBride lost their lives in the crash in Dayton, Ohio on Monday just moments after Penelope’s mother Melissa had picked them up at the end of their soccer team’s first game of the season.

A GoFundMe campaign established for their funerals said that Penelope and Eleanor ‘have always been inseparable and are now in the joy of heaven, together as always’.

Raymond Walters Jr, 32, was named by authorities in Dayton and Riverside as the driver of the stolen police SUV and he now faces two counts of murder and related charges.

He is accused of stabbing his father in a pick-up truck, crashing that vehicle, before stealing the police cruiser and causing the fatal crash which also injured 10 others.

Cousins Penelope Jasko and Eleanor McBride were both killed in the crash in Dayton, Ohio on Monday and have been described as ‘best friends’ by their family

Melissa Jasko was at the wheel of her minivan with six of her children and Eleanor, her niece, seated behind her moments before the crash.

As she was pulling away from the curb outside the library where they’d just dropped off a book, Walters, in the stolen cop car, allegedly ran a red light and smashed into the minivan, along with another car.

Walters had just been released from state prison on August 10 after serving more than a year for a robbery and was on active parole at the time of Monday’s deadly rampage. 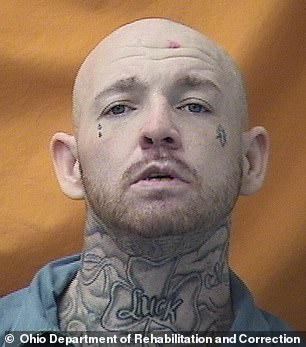 Raymond Walters Jr, 32, is facing murder and other charges in connection to a fatal mutli-vehicle crash that killed two children in Dayton, Ohio, Monday

Speaking to the Dayton Daily News, the step-grandfather of the two tragic girls, Ted Blackshear, called them ‘best friends’.

He said: ‘They were born nearly together, they did most everything together, and they left together.’

The GoFundMe campaign added: ‘While the family grieves for this loss of life and light, two of their children continue to recover at the hospital. No amount of money can return those sweet girls to life. What is needed most is prayers for the healing of bodies and souls.’

The incident began with a reported stabbing on Xenia Avenue in Dayton at 7.10pm, police said, and a pickup truck accident in the Dayton suburb of Riverside less than five minutes later.

According to investigators, Raymond Walters was sitting with his father, Lloyd Walters, in a vehicle when the two got into an argument.

Dayton Police Chief Richard Biehl told reporters Walters flew into a rage when he learned that his father was planning to take him to a hospital to seek mental health treatment. The 32-year-old man allegedly pulled a short-bladed knife and proceeded to stab Lloyd in his face, arms and chest, leaving the victim covered in blood, though he survived.

After the assault, Raymond Walters reportedly took off in the 1999 black Chevrolet pickup truck and made his way to Airway Road and La Pierre Drive, where he crashed the vehicle into a tree and fled on foot. 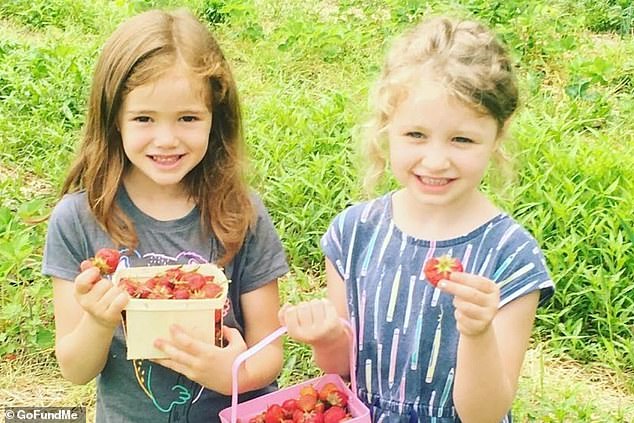 A GoFundMe campaign established for their funerals said that Penelope and Eleanor ‘have always been inseparable and are now in the joy of heaven, together as always’ 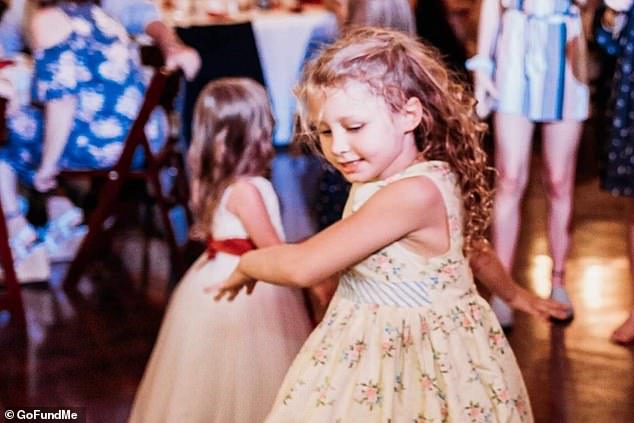 Melissa Jasko was at the wheel of her minivan with six of her children and Eleanor (pictured), her niece, seated behind her moments before the crash

Eyewitness Jonathan Poston recorded cellphone video that shows an officer having a brief struggle with the man and Tasering him before he throws the SUV into reverse and speeds off.

‘I’ve never seen anybody get Tased and not fall down immediately, let alone fight back with a police officer and take his vehicle,’ Poston told the station WHIO-TV. 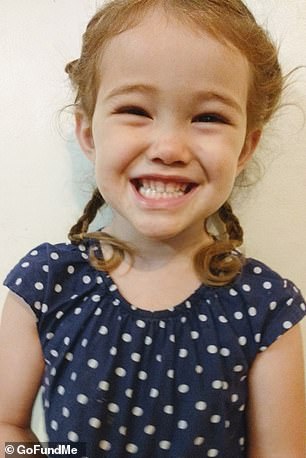 Speaking to the Dayton Daily News, the step-grandfather of the two tragic girls, Ted Blackshear, called them ‘best friends’

Police suspect that Walters, who has a prior history of drug abuse, was possibly high on meth at the time of the incident, but they are still waiting on toxicology results.

According to officials, Walters drove the stolen police vehicle back into Dayton, doing up to 101mph, and smashed into two occupied vehicles, including a grey Honda Odyssey van loaded with children, before wrecking the police SUV near the Dayton Metro Library.

At the time of impact, Walters was driving at a speed of 97mph, according to police.

Witnesses heard screams and rushed to the wrecked van, the Daily News and other media reported.

‘I jumped out and did my best to get as many children out of the van as I could,’ Denorris Hopgood told WHIO.

Some of the vehicle’s young occupants were pinned in the wreckage.

About 12 minutes passed between the pickup crash in Riverside and the fatal wreck in Dayton, police said.

Officials stressed that Walters was not being pursued by police when he crashed the patrol vehicle.

When officers arrived on the scene to arrest him, the 32-year-old man was described as being non-compliant. 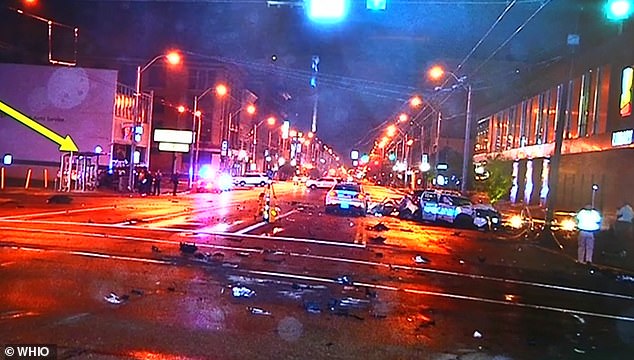 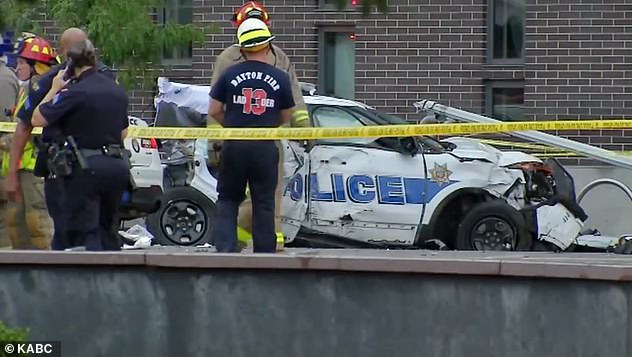 A Riverside, Ohio, police SUV is pictured following a multi-vehicle crash that killed two children and injured 10 other people in Dayton, Ohio, Monday 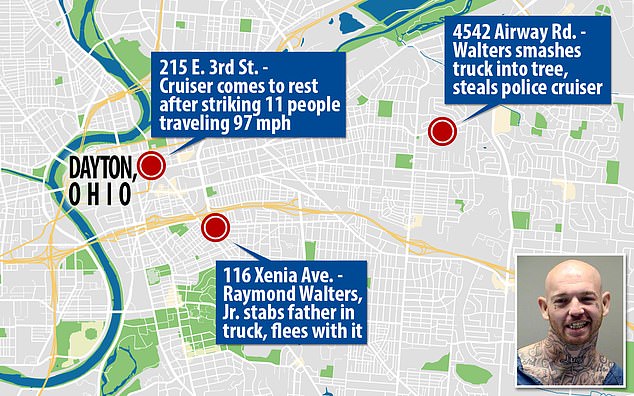 This map shows the locations where Walters allegedly stabbed his father, stole the cruiser and crashed into two vehicles on Monday 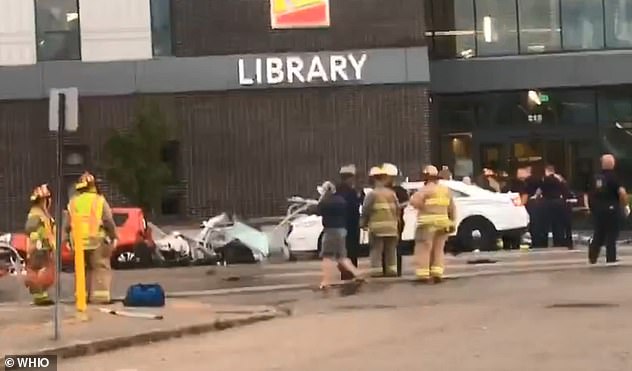 Walters, whose mugshot shows him with a massive ‘Luck’ tattoo on his neck, as well as tear drops inked on the right side of his face, has a lengthy criminal record, which includes charges of aggravated burglary; aggravated robbery; theft; drug possession; domestic violence; aggravated menacing; felonious assault; resisting arrest, and tampering with evidence, among other.

Police are discussing possible charges against Walters, including murder.

No charges have yet been filed in the case.