Pictured: The hired hitman hunted by police after he shot Bolton gym in daylight assassination

Pictured: The hired hitman hunted by police after he left Bolton gym goer fighting for his life in brazen daylight assassination attempt

Greater Manchester Police are appealing for help in identifying a gunman who tried to assassinate a man outside a gym in Bolton, after detectives released an e-fit image of the suspect.

A 28-year-old man was gunned down on the morning of July 12 by an individual who was hired to carry out the attack outside Outline Health and Fitness Centre.

The victim was shot three times but survived after receiving emergency treatment. The attack is believed to have been linked to a car bomb attack made last July which resulted in the jailing of three men – Darren Holland, Tom Omona and Luqman Hamid.

Greater Manchester Police have released an e-fit image (pictured) of a gunman involved in a shooting outside a Bolton gym on July 12. The hitman from the gym attack is described as mixed race, aged between 25 and 30, and was wearing a black bomber jacket at the time

The attack is believed to be the latest in a string of violent and dangerous clashes between criminal gangs in the Bolton area which go back several years.

The hitman from the gym attack is described as mixed race, aged between 25 and 30, and was wearing a black bomber jacket at the time.

Police are also seeking information about the location of a dark red Vauxhall Mokka, which just up on the corner of the road outside the gym car park just before the attack.

It was then spotted by CCTV three weeks later on the day of the attack with a man in dark clothing appearing from the rear driver’s side.

It is also suspected the gunman had a contact from inside the gym who informed the attacker that the target was appearing from the gym. 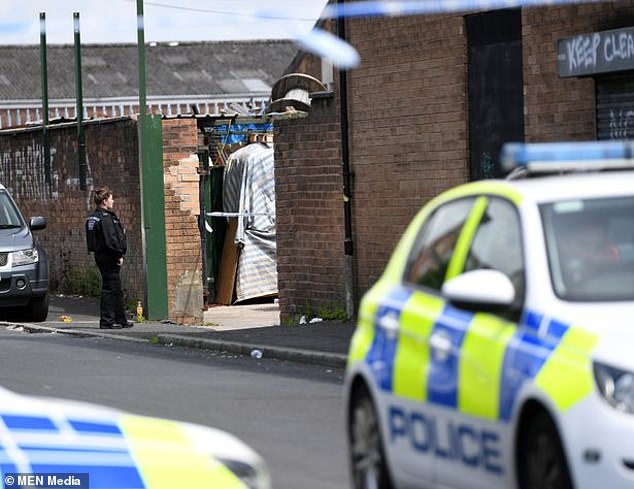 The hitman shot a 28-year-old man outside the gym three times, with the victim surviving the attack after receiving emergency treatment. The attack is believed to be the latest in a string of violent and dangerous clashes between criminal gangs in the Bolton area

The 28-year-old man was approaching his Mercedes when he was shot by the gunman, who then returned to the Vauxhall and sped away from the scene towards the Salford area.

Detective Chief Inspector Alan Clitherow of Greater Manchester Police said: ‘We have not yet been able to locate a stolen dark red Vauxhall Mokka, registration DW68 GDY, which was seen in the area at the time of shooting on Friday 12 July 2019.

‘We have also not yet been able to identify the gunman in this first linked incident.

‘If you know anything about either of the incidents or have any information at all about the stolen red Mokka which we know drove to the Cheetham Hill area shortly after the shooting, I am appealing to you to please get in touch with police as soon as possible.

‘Even the smallest piece of information could prove vital in helping police to complete their enquiries. 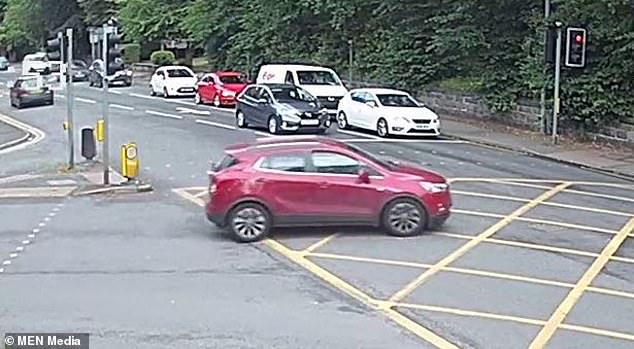 Police are also looking for information about the stealing of a dark red Vauxhall Mokka, which just up on the corner of the road outside the gym car park just before the attack

‘We have not ruled out that the gunman was local but one line of enquiry is that he has no links to Greater Manchester and was hired to commit the offence.

‘We believe that there are answers within the community and I am asking anyone with any information to please come forward.

‘The offenders behind this attack are dangerous individuals and we are doing everything we can to find them. We need the public to provide the missing pieces within our investigation.’

Anyone with information is encouraged to report it via the dedicated Major Incident Public Portal at https://mipp.police.uk.