PICTURED: Two US soldiers, 21 and 29, who were killed in Taliban roadside bomb attack in Afghanistan

The Pentagon has identified the two US service members killed by a roadside bomb in southern Afghanistan on Saturday.

Staff Sgt Ian P McLaughlin, 29, and Pfc Miguel Villalon, 21, were both on their first combat deployments when their vehicle struck an improvised explosive device near the Kandahar province on Saturday.

The Taliban claimed responsibility for the attack, which left two other American soldiers injured while they were conducting operations as part of NATO’s Resolute Support Mission.

McLaughlin hailed from Newport News, Virginia, while Villalon was a native of Aurora, Illinois, a Chicago suburb.

The soldiers’ deaths were the first for US Forces in 2020. 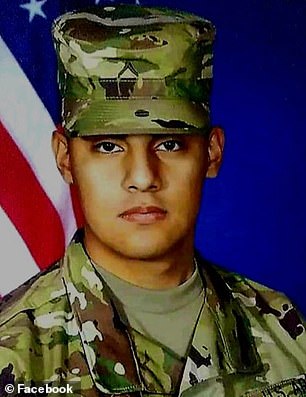 Staff Sgt Ian P McLaughlin, 29, (left) and Pfc Miguel Villalon, 21, (right) were killed by a roadside bomb in Afghanistan on Saturday. The Taliban claimed responsibility for the attack

McLaughlin and Villalon’s brigade commander, Col Art Sellers, said in a statement that they lived by the Army engineer motto ‘essayons’, which means ‘let us try’ in French.

‘When our nation called for its best airborne combat engineers to deploy into harm’s way, Staff Sgt McLaughlin and Pfc Villalon answered without hesitation,’ Sellers said.

‘They lived their motto, ‘Essayons’, and embodied the values of the All-American engineer.

‘Their loved ones are now surrounded by a caring community offering comfort and assistance through this difficult time,’ Sellers said.

In a separate statement, Maj Gen James Mingus, the 82nd Airborne Division Commander, said McLaughlin and Villalon ‘represent the very best of our nation and our Army.

‘Three-time volunteers, they went when our nation called and paid the ultimate sacrifice,’ Mingus said, referencing the soldiers’ combined enlistments.

‘They will be honored, mourned, but never forgotten and we are committed to taking care of their families for life.’ 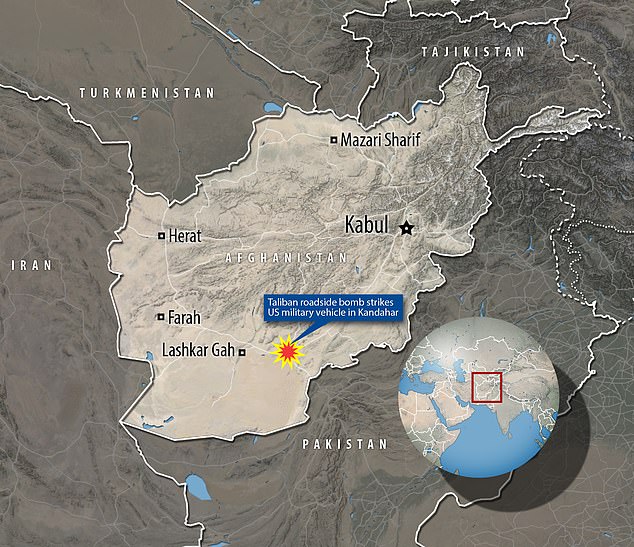 A map shows the location of the roadside bomb attack in Kandahar, Afghanistan, on Saturday 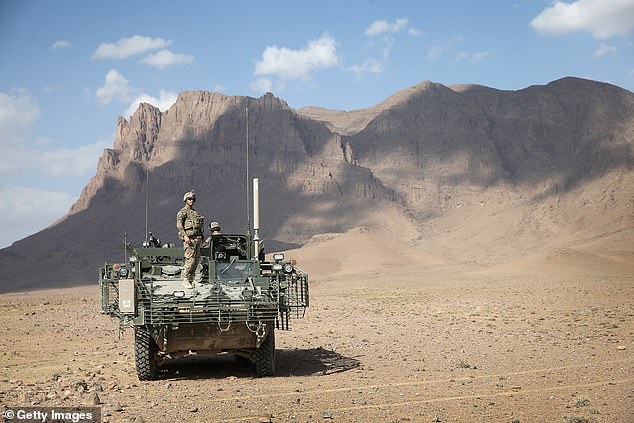 A US military vehicle carrying Villalon and McLaughlin was struck by an improvised explosive device in Kandahar on Saturday. A US Army Stryker vehicle with the 4th Squadron 2nd Cavalry Regiment is seen in the southern province in the file photo above

McLaughlin joined the Army in 2012 and his first assignment was as a horizontal construction engineer with the 62nd Engineer Battalion at Fort Hood, Texas.

In 2016, McLaughlin was reassigned to the 82nd Airborne Division, where he rose to become a squad leader. He graduated from the Advanced Airborne School Jumpmaster Course in 2018.

He is survived by his wife and four children.

His awards and decorations include the Purple Heart, the Bronze Star Medal, the Army Achievement Medal with ‘C’ device, the Army Commendation Medal, the Army Good Conduct Medal and the Combat Action Badge.

Aurora Mayor Richard C Irvin released a statement about Villalon’s death after it was confirmed.

‘Our prayers and condolences are with the Villalon family during this tragic time,’ Irvin said.

‘Miguel was a young soldier with dreams for the future and a desire to make a difference in the world today.

‘Much like all of us who have left from our hometown of Aurora to serve our country, our goal is to do our job well and return to our family and friends.

‘Sadly, Miguel made the ultimate sacrifice as he protected our freedom from the front lines.

‘The City of Lights shines much dimmer because of this loss. We’ll stand with his family and provide support. Godspeed, young soldier.’ 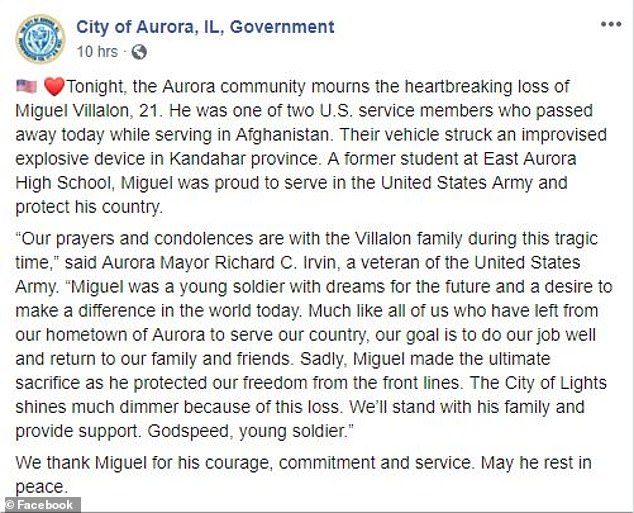 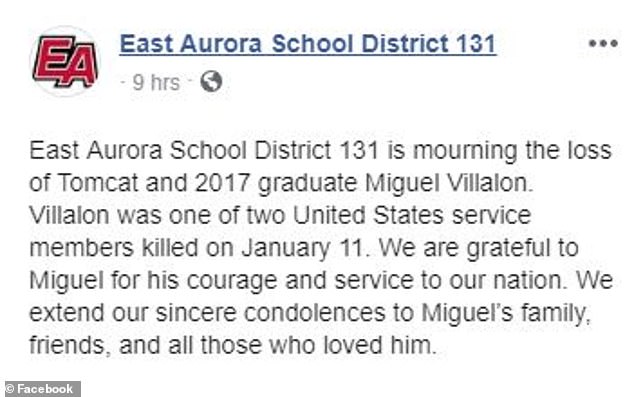 ‘East Aurora School District 131 is mourning the loss of Tomcat and 2017 graduate Miguel Villalon,’ the district wrote on Facebook.

‘Villalon was one of two United States service members killed on January 11.

‘We are grateful to Miguel for his courage and service to our nation.

‘We extend our sincere condolences to Miguel’s family, friends, and all those who loved him.’

Villalon was the second American GI from the metro Chicago area to die on the battlefield in the last week.

Army Specialist Henry Mayfield Jr was one of three Americans killed by a car bomb set off by al-Shabab extremists at Manda Bay Airfield near Lamu, Kenya, last Sunday.

Mayfield, 23, was from Hazel Crest, Illinois. 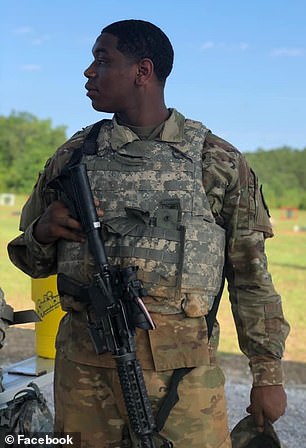 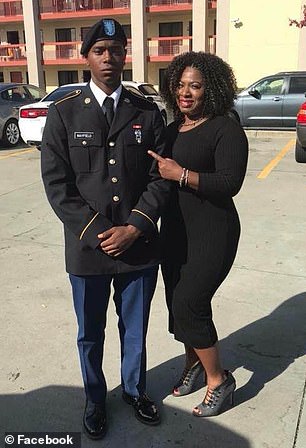 Another soldier from the Chicago area, Army Specialist Henry Mayfield Jr, 23, was identified as one of three Americans killed in an attack on an airfield in Kenya last Sunday. His mother (right) confirmed his death 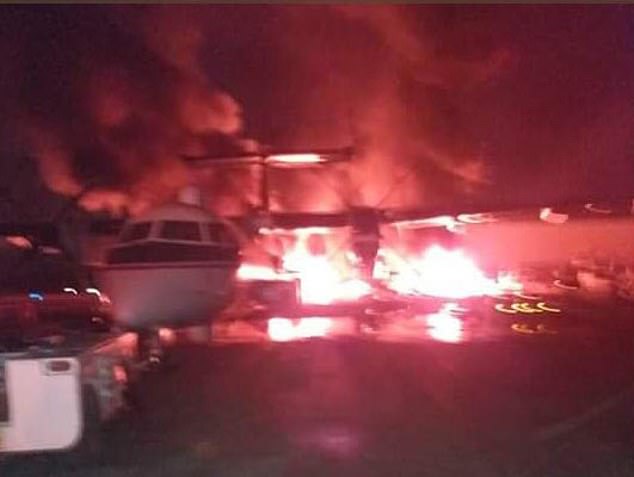 More than 2,400 US service members have been killed in the War in Afghanistan, which began in 2001.

Last year was one of the deadliest for the United States, with 23 American troops killed, even as Washington engaged in peace talks with the Taliban.

The latest attack seemed certain to stall fresh efforts to restart the on-again, off-again peace talks between Washington and the Taliban.

US peace envoy Zalmay Khalilzad has been pressing the insurgents to declare a cease-fire or at least reduce violent attacks.

That would give a window in which the US and the Taliban could then forge an agreement to withdraw all of America’s troops. That agreement would also set out a roadmap for direct Afghan-to-Afghan talks, mapping out the country’s post-war future.

An Afghan official said the attack had taken place in the Dand district of Kandahar province. The official was not authorized to speak with media and requested anonymity.

The Dand district encompasses metropolitan Kandahar, a city of about 550,000 and the historic capital of the Taliban.

The Taliban now control or hold sway over roughly half of Afghanistan, after nearly two decades of US military involvement in the country.

The militants continue to stage near-daily attacks targeting Afghan and US forces, even as they hold peace talks with the US.

Scores of Afghan civilians are also killed in the crossfire or by roadside bombs planted by militants.

In November, two US service members were killed when their helicopter crashed in eastern Logar province.

The US military at the time said preliminary reports did not indicate it was caused by enemy fire, though the Taliban claimed to have shot down the helicopter – a claim the US military dismissed as false. 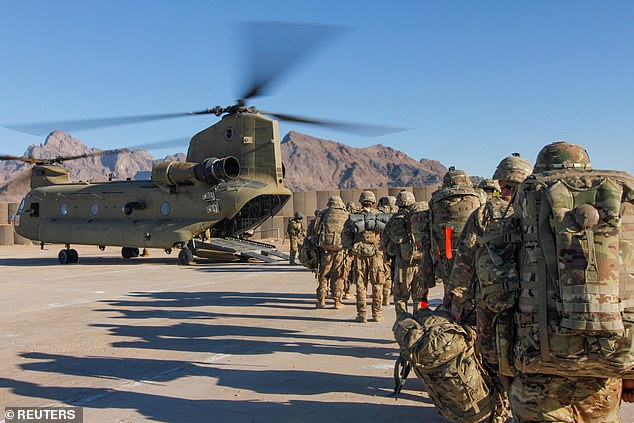 The Taliban claimed responsibility for the attack on Saturday. The above image shows infantrymen loading onto a Chinook helicopter to head out on a mission in Afghanistan in January 2019