Pictured: Wreckage of a £50,000 Aston Martin destroyed by a 20-year-old joyriding musician

George Jones, 20, admitted aggravated vehicle taking and driving without a license or insurance

Dramatic pictures show a £50,000 Aston Martin smashed and flipped onto its back after a musician went for a joyride in the sports car before crashing into a lorry.

George Jones, 20, who does not have a driving license and has ‘ADHD issues’, tried to overtake a HGV before clipping its rear wheel and flipping the six-litre V12 sports car on November 12 in Gloucestershire.

Jones’ father had hired the Aston Martin Rapide from Priority Hire on November 9 and was due to return it the day of the crash.

Nobody else was permitted to drive it.

He was given eight months detention in a young offenders institute, suspended for twelve months, and ordered to complete 250 hours of unpaid work.

Shocking photos taken after Jones had flipped the vehicle and run off show it flipped onto its back with a wheel snapped off near his Cotswold village.

Pieces of the sports car can be seen littering the road as the body work looks bent and contorted, showing signs of serious damage. 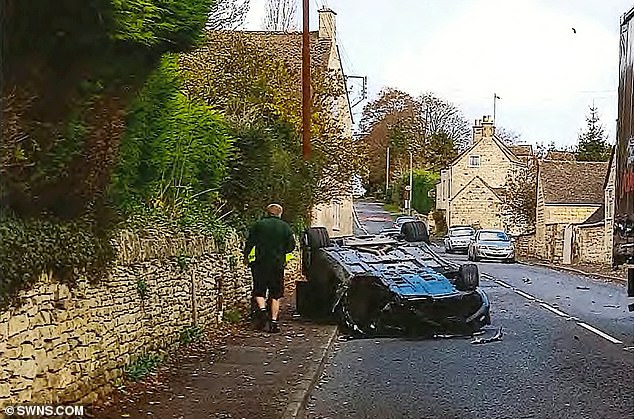 The £50,000 Aston Martin shown flipped over on a road near Painswick in the Cotswolds 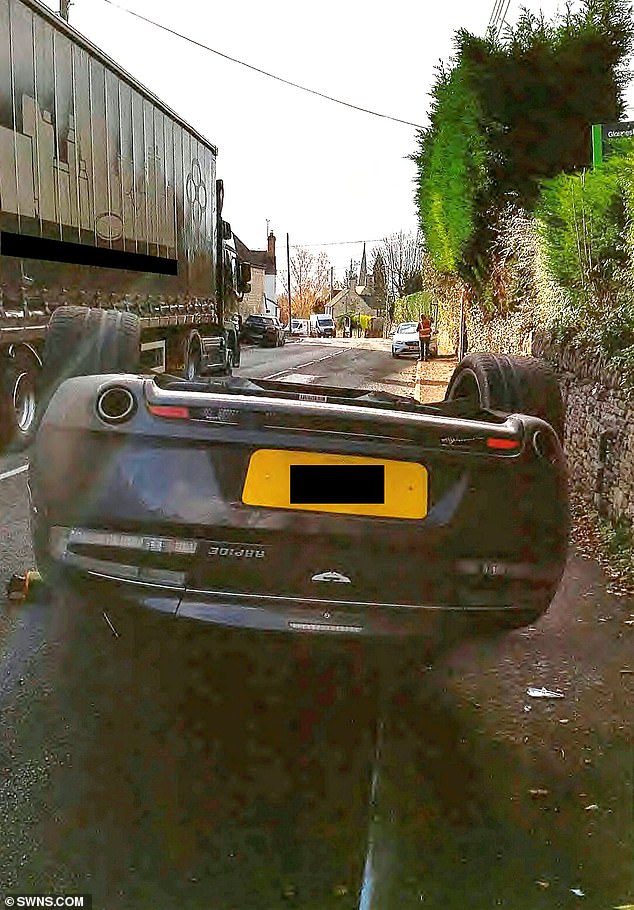 The court heard that at 10.45am on the day of the incident, Jones was heading back into Painswick on the A46, overtaking a number of cars.

But when he tried to overtake a lorry at the head of the line, Jones misjudged his manoeuvre, clipped the back of the HGV with his rear wheel arch.

The Aston Martin overturned and landed on its roof, the court was told.

Prosecutor Alex Daymond said the lorry driver felt a shunt which had enough force to knock him forward in his seat.

‘He looked in his mirror and saw a black vehicle doing a cartwheel,’ Mr Daymond said. 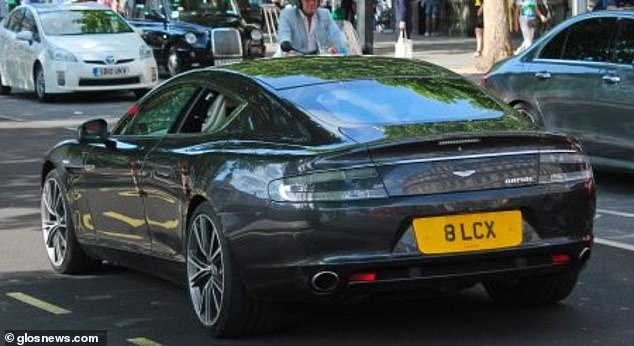 The lorry driver got out and saw Jones ‘crawling across the roof of the car’ before saying ‘I am f***ing off’ and running away, the court was told (pictured: The Aston Martin Rapide before the crash)

The lorry driver got out and saw Jones ‘crawling across the roof of the car’ before saying ‘I am f***ing off’ and running away, the court was told.

The vehicle was quickly traced through the hire company to Jones’ father, and the police attended the address.

Jones was arrested and admitted the offence.

‘The company also lost income from eight weddings they had to cancel to a value of £4,400,’ he said.

Defence lawyer Joe Maloney said: ‘As a result of the incident on the 12th November, he was quite shaken up. And remains quite shaken.

‘This caused great concern in the household. His mother is here in support of him

‘They (his parents) are perplexed. He is only 20 years of age and has no previous convictions at all.

‘He is very shaken. He will never appear before a court again,’ Mr Maloney suggested.

Judge Michael Cullum said: ‘The trouble is if you had asked the day before about this accomplished musician doing a music production degree, “would he be here facing jail?” they would have laughed.

Mr Maloney said his client had not been taking his medication which he had left behind at his student accommodation in Brighton.

‘He is a talented musician, and doing well in his studies,’ Mr Maloney continued.

‘Within the report there is an assessment of low risk of re-offending.

‘He is well aware from what I have said to him, that this is a serious offence that can attract a sentence of up to two years imprisonment.

‘He has learnt a powerful lesson. He is a decent lad, from a decent family.

‘He is very much shaken, and truly, truly sorry.

‘He has shown considerable contrition evidenced by admissions in interview.

‘He was so grateful that no one was injured.

Sentencing, the judge asked for the image of the 476 bhp luxury car on its roof in the streets of the Cotswold village to be shown on the court monitors.

He said to Jones: ‘What sort of person leaves the scene of that accident?

‘What sort of person chooses to wreck £50,000 of car he has stolen? Just walking away, having been so lucky he did not kill himself.

‘I personally have dealt with quite a few deceased young men, often passengers in vehicles in such situations. You walked away with out a scratch. You used up all the luck anyone would have in a lifetime.

‘I sill do not understand why you took it. Yes, you have ADHD issues. But you knew you did not have the right to drive it. You did not have a licence, and were not entitled to drive any car. But you chose to steal a vehicle.

‘You drove towards Painswick. Goodness knows what damage you would have done if you had got there. You then chose to overtake a lorry. You were not driving responsibly.

‘You have a lot to offer, on a prestigious music production course. That does not involve you being in custody. Yet what would right thinking people think if people like you did not receive a custodial sentence, causing £35,000 of damage?

‘If you come back having not done what I have ordered you to do, despite your difficulties, you will go to custody.

‘If you act as the person who has some determination to defeat his difficulties you will not be back.

‘If you act as the feckless youth who steals a car as it looks nice and does not bother with his medication you will be back.

‘You have to decide which is the real George Jones.

‘There will be consequences – it is not a let off. Other orders will be made.’

Jones was also ordered to complete 250 hours of unpaid work.

Disqualifying him from driving for two years, the judge said: ‘You should not be allowed to go anywhere near a car.

‘If you come back, you better bring a bag to help you with your time in custody.

‘Don’t ever come back and make you mother have to sit through this again.’

Jones was also told he would pay court costs of £425.