As technology has advanced and attitudes have changed many of Britain’s jobs have been consigned to the history books.

No longer would you see street lamps being lit manually, or large cotton mills employing thousands.

The professions have simply died out.

Now stunning pictures have revealed some of these forgotten occupations.

The incredible images show a lift operator on the London Underground around 1910, children selling newspapers on the streets in London and workers operating machinery at a cotton mill in 1906.

Other striking shots show salt workers on a mine train, a group of pillow lace makers around 1900 and a lamp lighter in Warrington.

A man pictured in 1936 using stilts for the stringing of hop holes. Hop stringing involves creating a framework of string for hops to climb and grow. The string is supported by a permanent structure of poles and wirework. Traditionally this would all be created by highly-skilled stilt walkers but as is typical with much farm work machines have now replaced the need for human manual labour 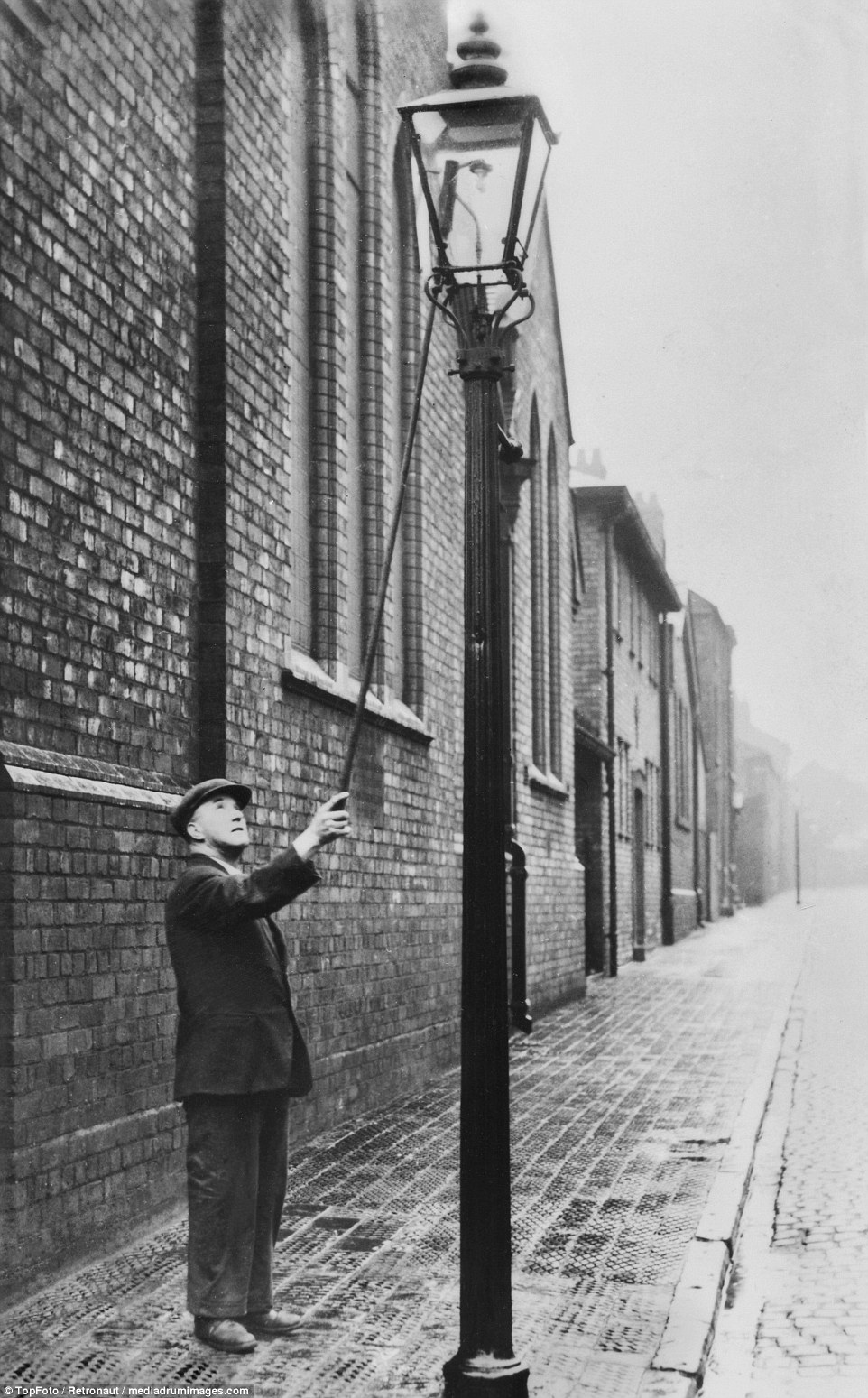 A lamp lighter pictured in 1912 on Lower Bridge Street in Warrington. To celebrate the birthday of King George III in 1807. Frederick Winsor, an engineer, lit a candle. Not just any candle, however. To gasping crowds, he instantly illuminated a line of gas lamps. Over the following decades, thousands of gas lamps went up across London. These were lit by teams of lamplighters across the capital. With the dawn electricity however, there was no need for lamplighters and the profession died out 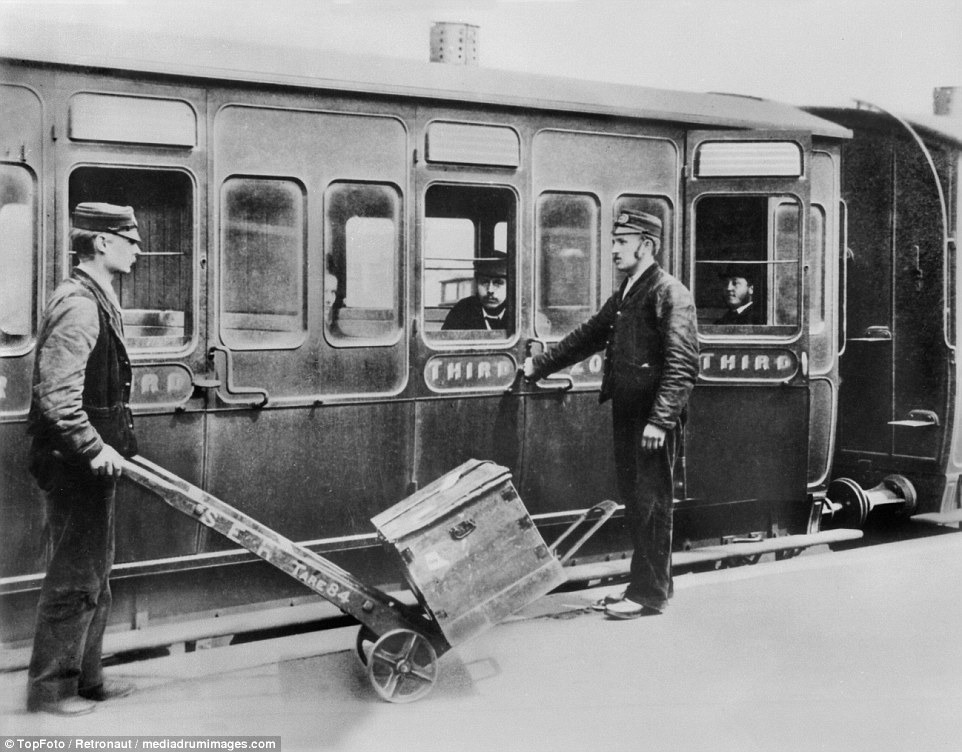 A South Eastern Railway platform porter pictured in 1885 in London. Porters arose in the early days of railway companies and would handle passenger’s luggage, assist on ticket barriers and in booking offices and carry out general cleaning duties on the platform. Many porters would work for free, but often customers would provide a tip for their service. During the 1970s the role went into decline as station attendants took on most of the responsibilities. Passengers now largely carry their own luggage on to trains 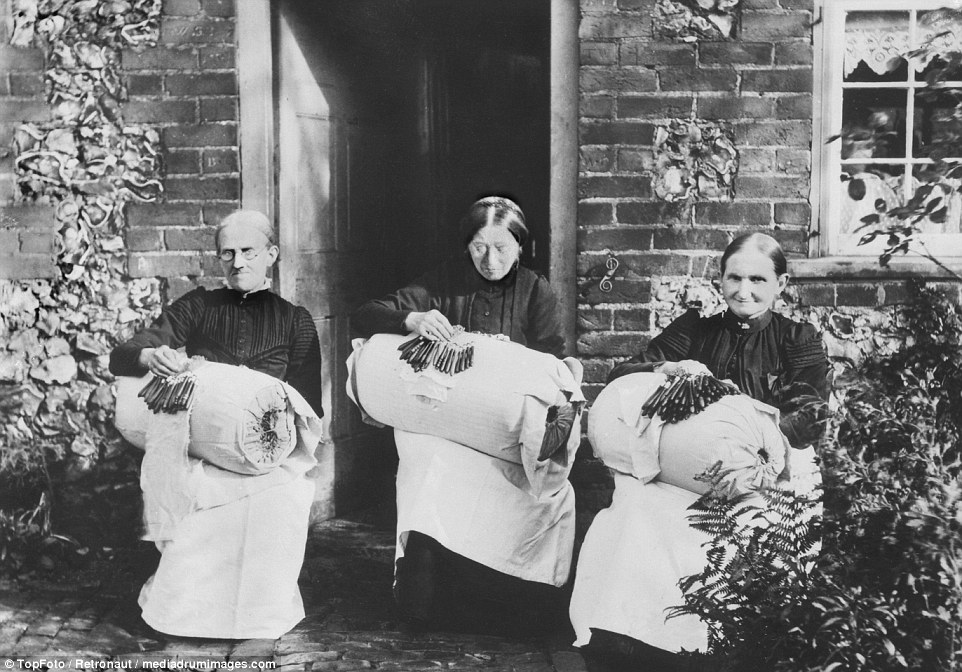 A group of pillow lace makers pictured in 1900. As with many professions involving fabric in the early 1900s, a lot of the design was created by hand. With the dawn of more modern machinery, however, it was no longer necessary to carry out every single step in this way 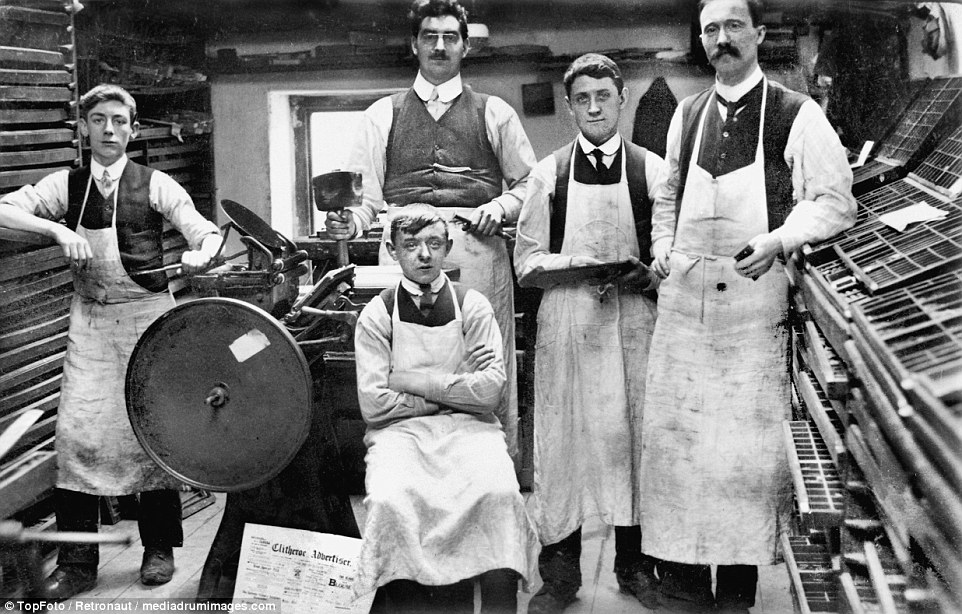 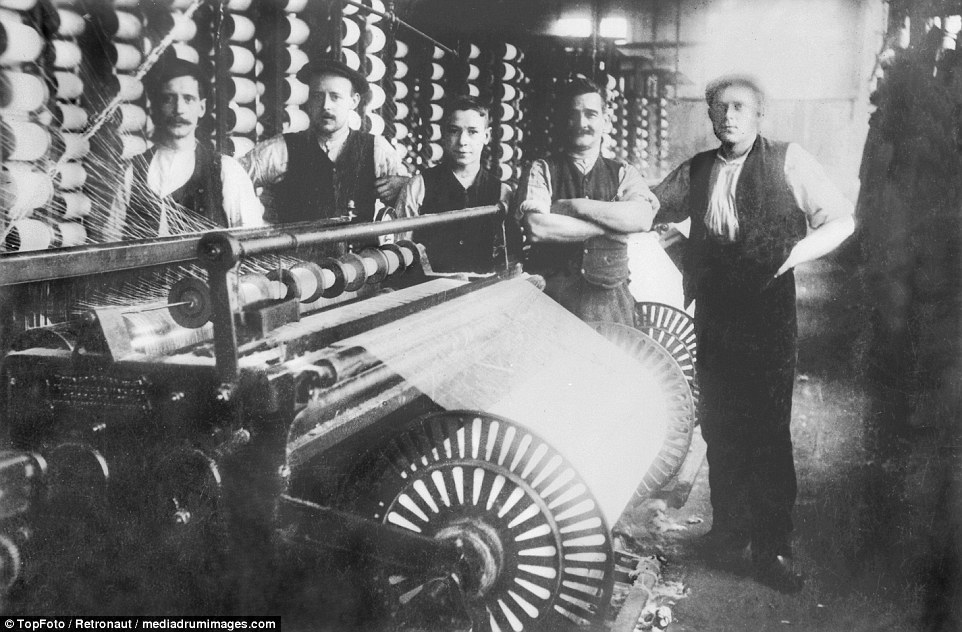 Workers at machinery in a cotton mill pictured in 1906. The industrial revolution led to the mechanised spinning and weaving of cotton fibre into fabric. By 1912 production had peaked in the United Kingdom with the country producing around eight billion yards of cloth. The industry was primarily based in Lancashire with around 2650 mills in the area employing 440,000 people. The outbreak of World War One led to a steep decline in the industry, however. Cotton could no longer be exported to foreign markets and those countries, such as Japan, set up their own factories. These countries were also able to produce it much more cheaply. In between the first and second world war 345,000 workers left the industry and 800 mills closed 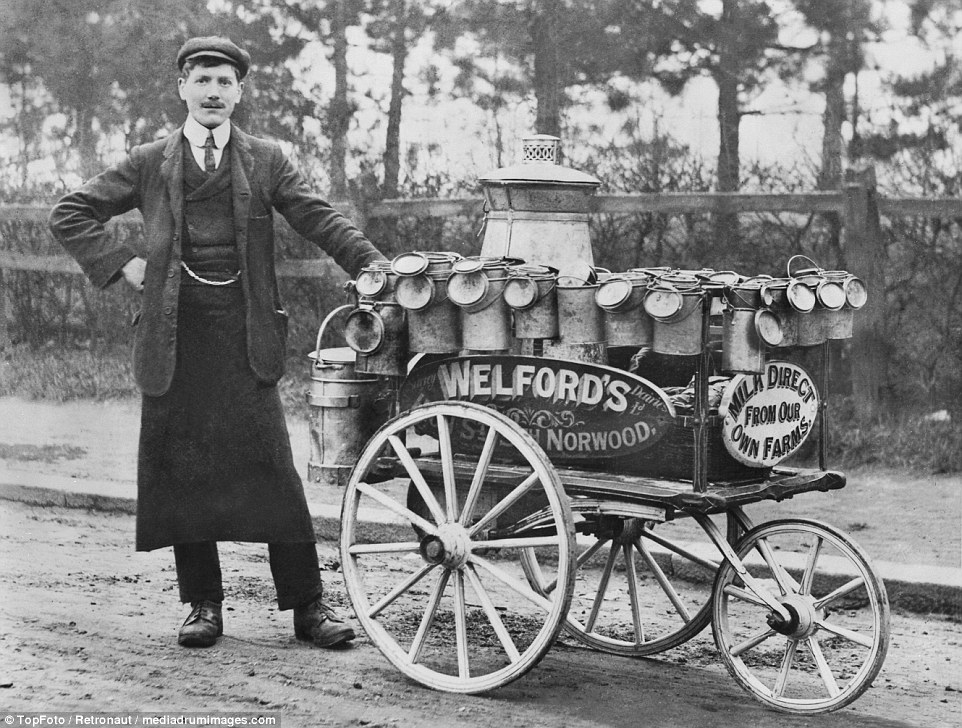 A milkman with his cart pictured in 1923 in Norwood, London. During this time milk was delivered up to three times a day in churns. The milkman would fill customers’ jugs by dipping a measure into one of the churns. Milk bottles would soon become the norm however, and later with the advent of refrigerators milk no longer needed to be delivered as frequently. It can now also be stored at and purchased from convenience stores

There has simply been no need for people to perform jobs that a machine could now do or where demand for that service has vanished.

A 2017 Oxford study found that all the developed nations on earth will see job loss rates of up to 47 per cent within the next 25 years.

This projected loss of jobs has been attributed to advancing technology where machines will continue to replace the jobs of humans.

Mechanisation has always cost humans their jobs. The mechanical loom for instance put weavers out of business, but it’s also created jobs. Mechanics had to keep the machines going, machinists had to make parts for them, and workers had to attend to them, and so on. 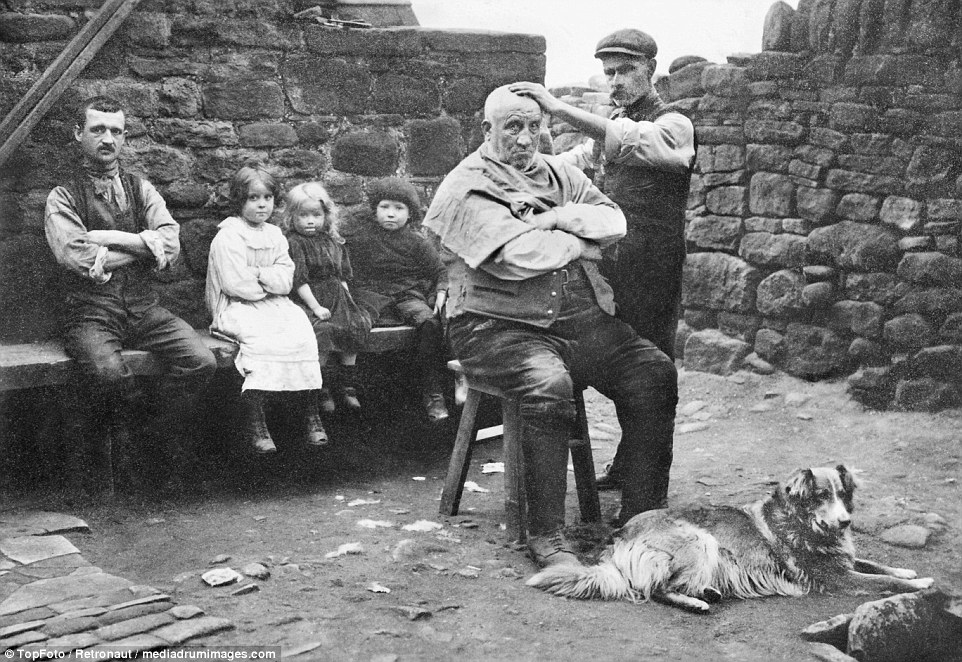 An open air barbers pictured in 1900. During this time visiting a barbershop was considered an experience for the wealthy. Instead common folk would have their haircut outside on a stool. Nowadays it is more common to visit a indoor barbershop given changing attitudes 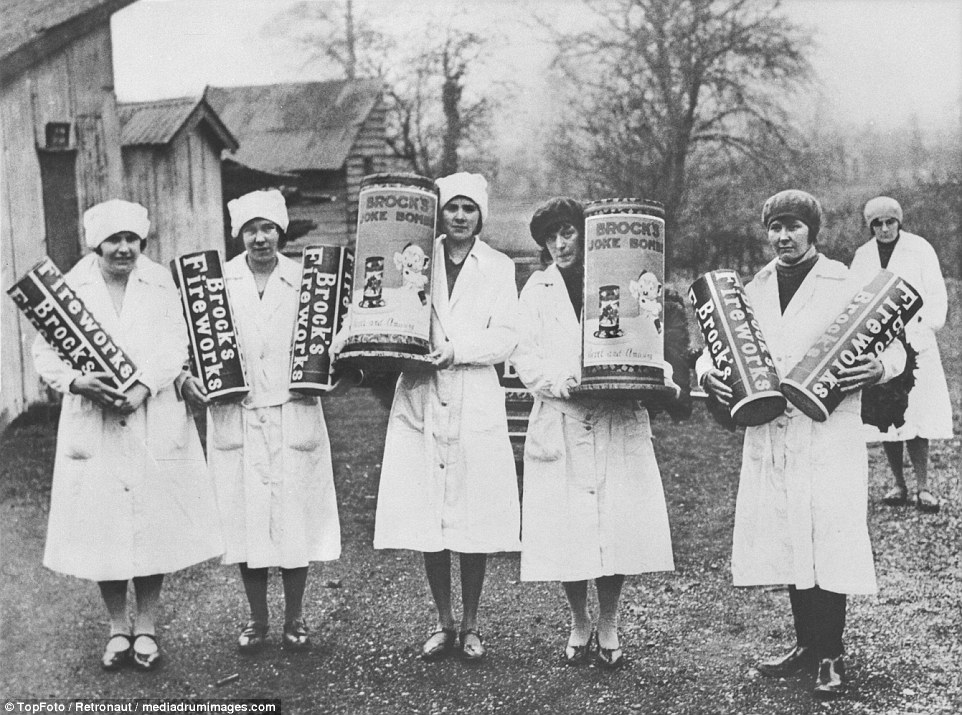 Workers from Brock’s fireworks factory pictured in 1930 holding giant fireworks in Cheam, London. Brocks was founded in Islington in 1698. It became world famous for presenting ‘Brock’s Benefits’ in Crystal Palace, but eventually had to stop following a fire. As with many professions the need for hand-crafted fireworks died out with the invention of more sophisticated machinery

Left: Hop picking in Paddock Wood, Kent. These hop pickers were photographed in 1962. The county was well-known for its hop farming. It has a strong and fertile soil perfect for the growth of hops. In the past, during the hop harvest, tens of thousands of Londoners would take a holiday from London and come down to the Kent countryside to pick the hops. Now machines have largely replaced the task of hop picking. Right: A lift operator pictured on the London Underground in 1910. Being a lift operator was not a simple job. The operator would have to regulate the elevator’s speed and ensure it came to a parallel stop of the chosen floor. With the advent of user-operated elevators, however, their profession largely became obsolete. There are now very few lift operators remaining 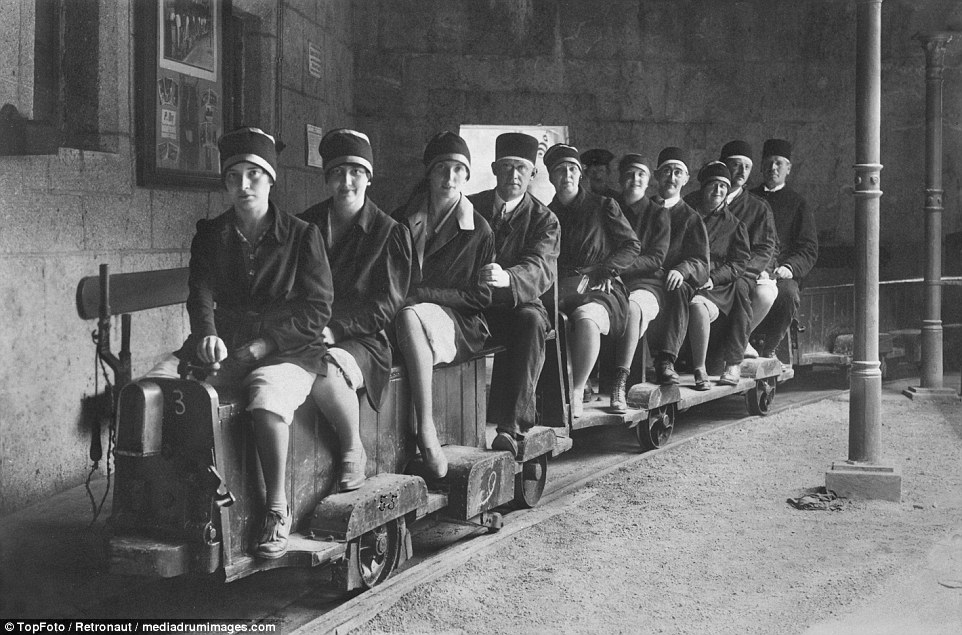 Salt workers on a mine train pictured in 1927. Salt was originally mined manually from the ground but in the 19th century it became uneconomical to mine salt. Instead the salt was extracted using water as a solvent.  Hot water was instead pumped through the mines. This would dissolve the salt and create a brine that could be pumped out. Salt would then be extracted from this 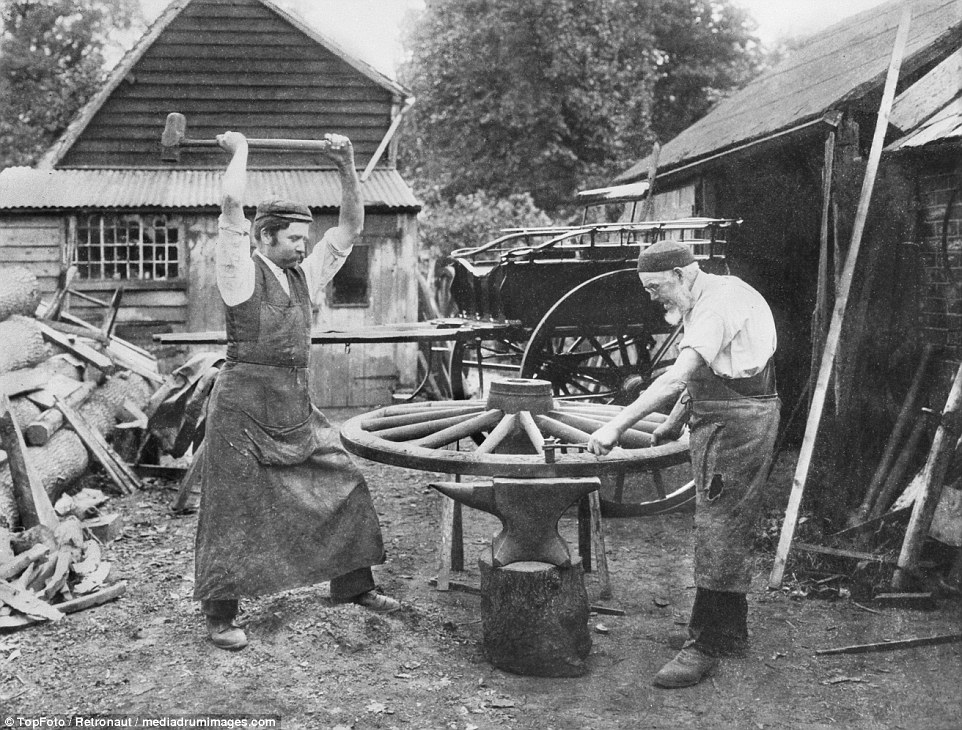 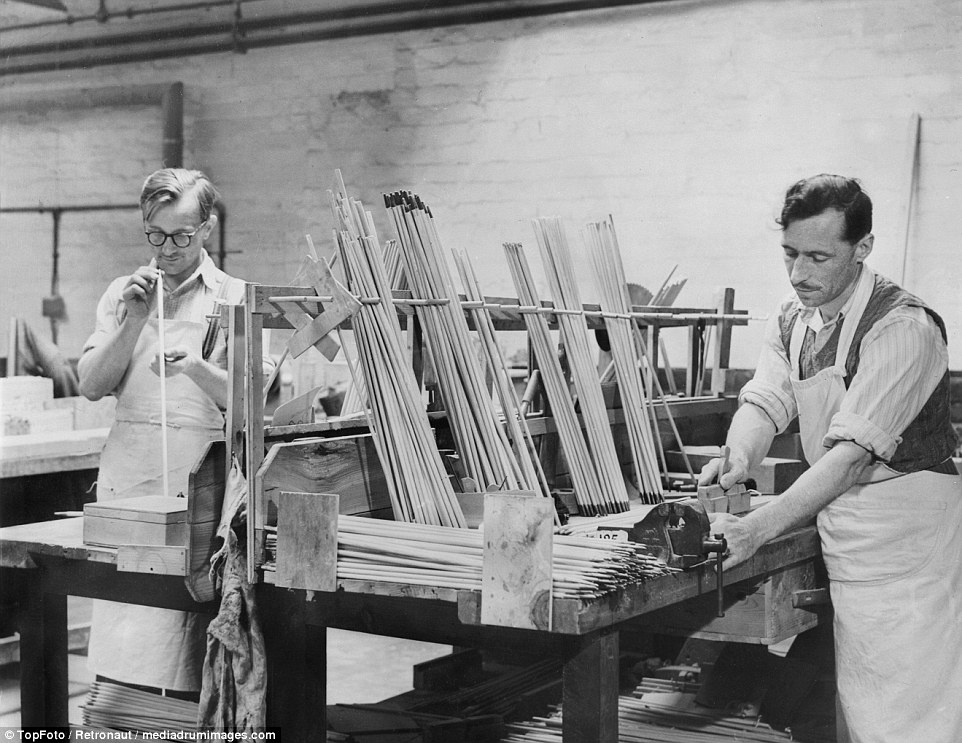 Fletchers pictured making arrows in 1948. The art of fletching traditionally involved adding three half-feathers to the back of an arrow or dart. These would be equally spaced around the circumference of the projectile. Originally this would be done by hand using glue or thread, but now with modern adhesives this is no longer necessary 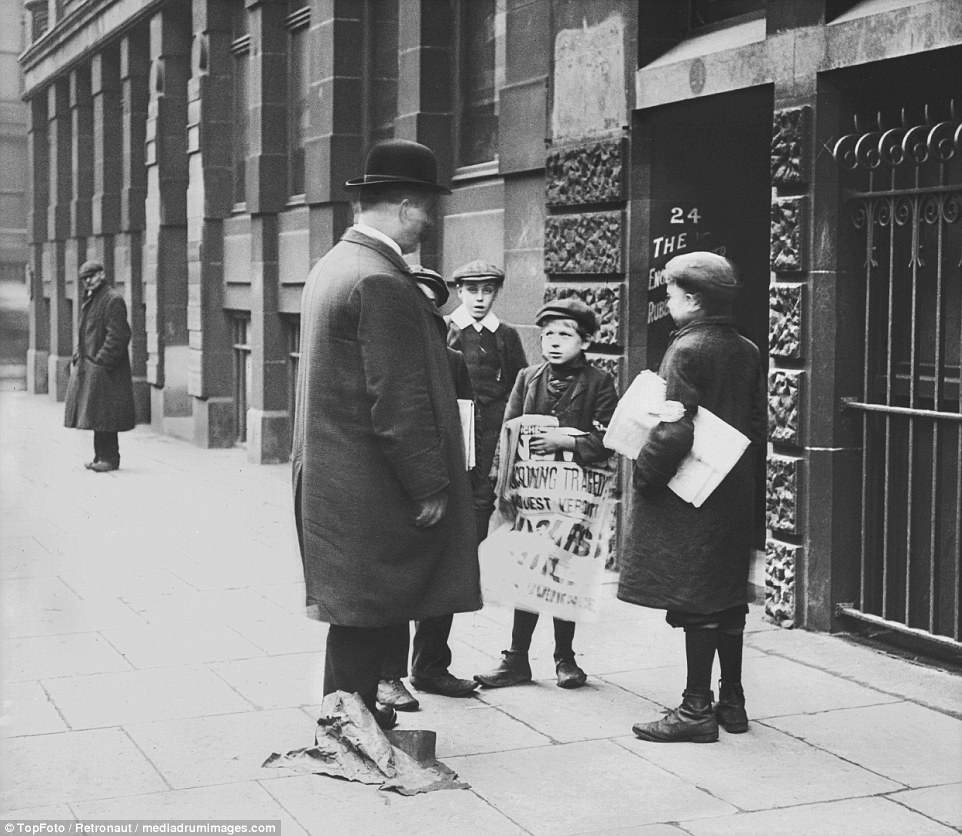 The sight of children selling newspapers on the streets of London would have been common in the early 1900s. Changing attitudes have led to a decline in this

A lot of times those in one profession could pivot to another. At the beginning of the 20th century for instance, automobiles were putting blacksmiths out of business. Who needed horseshoes anymore? But they soon became mechanics.

The middle class is apparently most at risk in the coming technological revolution as computers will be able to perform those tasks more efficiently and at a cheaper cost.

According to The Economist, computers will be able to analyse and compare reams of data to make financial decisions or medical ones. There will be less of a chance of fraud or misdiagnosis, and the process will be more efficient.