Piers Corbyn railed against the ‘Covid con’ this morning as he arrived at his trial for allegedly breaching lockdown rules.

Speaking through a megaphone, he told around 20 supporters gathered outside Westminster Magistrate’s Court: ‘If we win, all the Covid convictions so far will be questioned.’

He is accused of breaching coronavirus restrictions during anti-lockdown protests in London’s Hyde Park in May.

Corbyn, of East Street, Southwark, denies two counts of participating in a public gathering of more than two people in England during the coronavirus emergency period.

The court today heard that police abused Covid restrictions to arrest Corbyn during an because he was the former Labour leader’s brother.

A judge also threw out his application to stay the trial proceedings after Corbyn’s lawyers said the prosecution had not made video evidence of the protest available to the defence, labelling it ‘an abuse of process’. 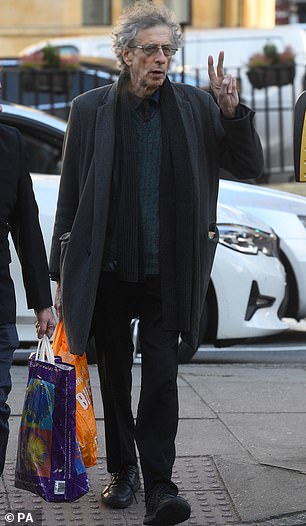 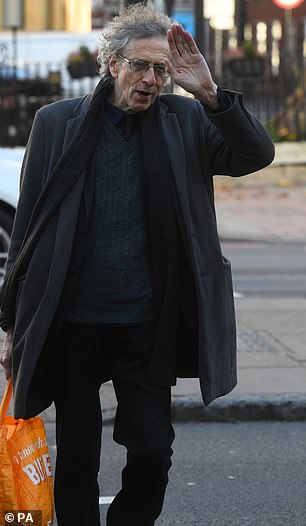 He arrived at court this morning clutching a plastic bag, before hugging a supporter and addressing the small crowd

Mr Cooper said: ‘It’s not accurate to say this was irrelevant material that could be left off the schedule, it was plainly relevant.

‘We have footage of someone called Danny Shine protesting on May 16 at Speaker’s Corner café right next to where Mr Corbyn was protesting with a megaphone.

‘The same officers who arrested Mr Corbyn were standing by without taking any actions whatsoever.

‘This footage must include that. The fact it hasn’t been disclosed is a dereliction of the Crown’s duty.

‘These proceedings should not continue further because they undermine the integrity of the criminal justice system.’ 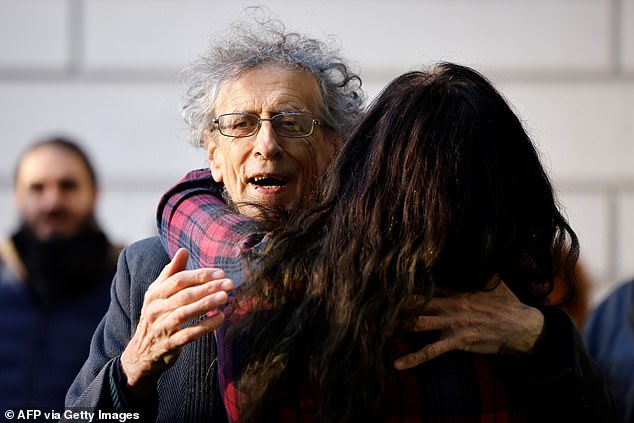 He went on to say the prosecution deliberately ‘mispresented’ their case at the last hearing and chose not to disclose the documents.

David Povall, prosecuting, said: ‘The Crown is clearly responsible for this. An apology if we were wrong about what was ordered.

‘It appears to have been an innocent error by the prosecutor on the day who was under considerable pressure.’

But he maintained the mistake ‘was not deliberate’ and added ‘the defence have ample material on which to make their arguments’.

‘There is nothing that would prevent Mr Corbyn having a fair trial today,’ he said.

District judge Samuel Goozee ruled there had been ‘late disclosure’ of material by the prosecution but this ‘doesn’t prevent the fairness to the trial being overseen by the court’. 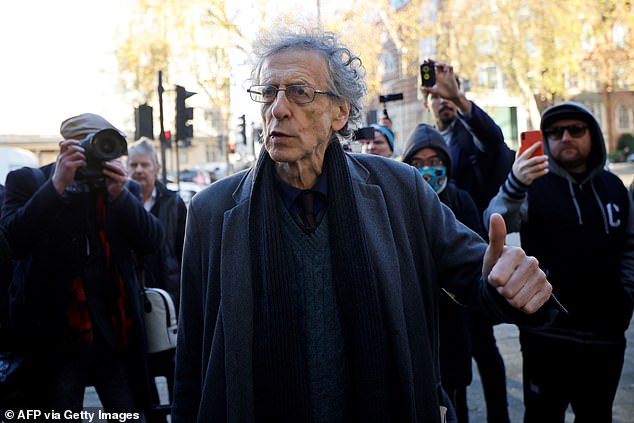 Corbyn, of East Street, Southwark, denies two counts of participating in a public gathering of more than two people in England during the coronavirus emergency period

He said there was ‘no evidence of bad faith’ nor of the court ‘being deliberately mislead’ and that he was not persuaded the ‘mishandling’ of material amounted to an abuse of process.

Mr Cooper also claimed police ‘must remain consistent’ and questioned why the Black Lives Matter marches counted as a reasonable excuse to break lockdown, but not his client’s process.

Twelve members of Corbyn’s group, Stand Up X, sat at the back of court to support the controversial weather forecaster.

District judge Goozee issued a warning that the court would ‘take action’ if people were found to be making recordings.

Speaking after a break in proceedings, he told those in courtroom 1: ‘It has been brought to my attention by the police that there may have been some recording taking place, not necessarily in the courtroom, but outside on the concourse.’

He said police had seen ‘footage’ that had been ‘uploaded’.

Mr Goozee said that if he found ‘anybody recording these proceedings and uploading them’ then the court would ‘take action’ and deal with it as a contempt of court.

Corbyn has been a staunch opponent of the Government’s restrictions and has already been fined once for breaching rules.

Large gatherings are banned under emergency legislation to wrestle down the pandemic.

He was also arrested last week by Avon and Somerset Police when he took part in the Stand Up Bristol demonstration.

The force had repeatedly warned organisers that the event was not allowed and of the risks it presented of increasing the spread of Covid-19, it said.