I recently arranged dinner with Amanda Holden and her husband Chris at Ivy Chelsea Garden, one of the new chain of Ivy restaurants spawned from the original iconic eaterie in Covent Garden.

Susanna’s undisguised happiness at how things have now turned out is slightly tempered by the knowledge that once again, I was right. As for her choice of partner, I note that like me, Steve is a 53-year-old divorcee with children, and a wealthy, successful, handsome man who is passionate about a London football team. She obviously has a ‘type’

He wasn’t, which was unusual as he’s usually very reliable. At 8.30, my phone rang.

‘WHERE ARE YOU?’ shrieked Amanda.

‘Sitting at our table,’ I replied.

I sighed. ‘Amanda, which Ivy?’

My thoughts immediately turned to poor Chris, who would now have been sitting alone for 45 minutes.

At 8.45pm, Amanda rushed in followed by Chris, slowly shaking his head.

‘Have one,’ she cackled when they arrived. ‘Just slide your prawn into my dip. NOT A EUPHEMISM!’

With Amanda, everything is a euphemism. To emphasise this trait, tonight she expertly hosted a star-studded ITV talent gala at the Royal Festival Hall, and appeared on stage after Liar star Ioan Gruffudd performed an opening sketch.

‘Let’s not forget Ioan started his career right here on ITV as a Hornblower,’ was Amanda’s opening line, ‘which of course is how many of us got where we are!’

Amanda, who worked alongside me for four years on Britain’s Got Talent, had  special empathy for my current female co-star, Susanna Reid.

‘Susanna, you are an inspiration to so many women in this country,’ she declared. ‘If ever the mums of Britain needed a masterclass in how to deal with tantrums, shouting, whining, sulking and stubbornness, all they have to do is switch on Good Morning Britain and there it is… honestly, it’s a wonder you don’t wind Piers at the end of it.’

Blue Peter is 60 years old. When I was a kid, the iconic show’s star presenters were John Noakes, Valerie Singleton and Peter Purves.

Today, I got the chance to finally thank one of them for the hugely beneficial impact they had on my formative life.

‘Now wait a minute,’ he exclaimed with a horrified expression. ‘I’m not taking the blame!’

It’s not always as deflating to meet your childhood heroes. I’ve been in LA for half term, and flew back tonight.

As I checked in at the British Airways desk, a very glamorous lady in the queue struck up conversation with me.

‘Hi Piers, we both bought houses from the same Beverly Hills real estate broker,’ she said.

There was something familiar about her as we chatted away, but it was only when she walked away that one of the BA team told me it was Jaclyn Smith – one of my teenage pinups, from Charlie’s Angels.

Jacqui is now 73, but looks 50. She was also perfectly delightful.

Asked about me in a new interview for a British newspaper, she said: ‘I think it’s important there are people that do disagree with you openly. I want that.’ She added: ‘You guys have quite a beast over there, huh?’

I turned to the Urban Dictionary to determine the official street definition of ‘beast’ and it read: ‘A person that is extremely talented at whatever they do and always displays great determination, dedication and resilience to always win.’

Susanna tipped me the wink that she was in a new relationship a few weeks ago, but I asked her not to tell me the name of her boyfriend so she wouldn’t suspect me if it leaked to the press. 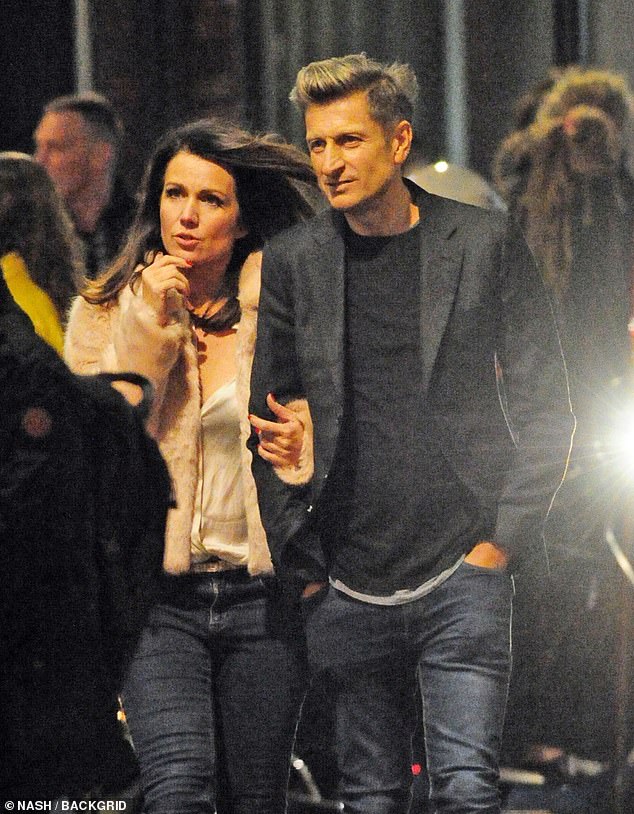 Close: They’ve been secretly dating for months and Susanna Reid and Crystal Palace chairman Steve Parish stepped out for a date night in Soho, London

It was no real surprise to discover it was Steve. People have rushed to give me credit for setting them up together, but it had nothing to do with me.

In fact, bizarrely, the unwitting Cupid is Donald Trump. When my old friend became President of the United States two years ago, Susanna and I threw an impromptu drinks party at the London hotel in New York to celebrate anchoring GMB’s election-night coverage. Guests included Frank and Christine Lampard, Richard Bacon and his wife Rebecca, and my eldest son Spencer.

‘Do you mind if Steve Parish joins us with Crystal Palace manager Alan Pardew?’ asked Susanna, a massive Palace fan. ‘I know them through the club and they happen to be in town.’

So they came along too and we had a hilariously drunken night during which two things became crystal clear: 1) Steve’s a very smart, funny and entertaining guy. 2) He was an even bigger fan of Susanna’s than she is of Crystal Palace.

‘You two are perfectly suited,’ I teased her afterwards. ‘Don’t be ridiculous,’ she retorted.

Susanna’s undisguised happiness at how things have now turned out is slightly tempered by the knowledge that once again, I was right.

As for her choice of partner, I note that like me, Steve is a 53-year-old divorcee with children, and a wealthy, successful, handsome man who is passionate about a London football team.

She obviously has a ‘type’.